Here's another Star Wars/Dark Forces themed mod for GZDoom. I was inspired by previous Star Wars doom mods, especially Ceejay's one for EDGE. It replaces Doom's weapons, enemies and (almost all) decoration objects. Most projectiles are 3d models of Star Wars blaster effects. Gameplay is changed quite a lot, there aren't any hitscan attacks but projectiles typically move quite fast. Infighting is also extremely rare and only happens between imperials, aliens and bounty hunters (they won't attack their own team). The Icon of Sin is also replaced with a more traditional boss enemy... Emperor Palpatine! (This is an earlier version of the mod which doesn't include force powers for the player)

-Mine explosions colours are fixed
-Bowcaster projectiles now have trails
-Jet Flame Trooper graphic is now holding oppressor
-Boba Fett has been redone, now he walks and flies and spawns with the Mancubus. New voice clips too!
-DL-44 Heavy Pistol can now fire semi-auto
-Bowcaster's initial charging is a bit faster
-New enemy: Human bounty hunter, behaves similar to the rodian bounty hunter
-New spider probe droid, is lighter coloured and shoots a green laser beam. Special thanks to Horror Movie Guy and his Bratwurst mod for making code for randomizing boss monsters
-Battle stimulant is now the sole replacement for the berserk (weapon charge pack are now spawned with blurspheres). The battle stim also now functions more like the classic berserk pack, healing you up to 100 health and your melee damage stays increased for the whole level. This was done to fix the balance of some levels (ie: you're in an area with only a berserk pack, no ammo and a bunch of pinkies, kind of annoying to get the weapon charge pack then)
-EE-3 Carbine's primary fire can now be semi-auto. Simply click primary fire immediately after fireing for an increased rate of fire. Holding down the fire button will leave a breif pause between bursts. The projectiles are faster and more accurate too.
-Small bacta tanks won't be picked up when health is at 200
-Fixed animation error in one of the tech barrels
-Oppressor's alt-fire flames are slightly larger, to show they do more damage
-Ion Blaster does a little bit more damage
-DLT's pick-up sprite is a bit darker
-Jet Trooper variants now spawn in Doomed Space Wars (for doomed space wars patch)
-Two new jet trooper variants, one armed with a flechette and one armed with an oppressor
-Hi-Res fonts for the main menu
-New intermission map screens for Doom 1
-New rare enemy; advanced probe droid, a golden probe droid that is a bit tougher
-Added new item hyperspace transponder; summons a small group of friendly rebel troopers, much like the teleporter beacon from Strife. Spawns with BlurSpheres
-Automap renamed Terrian Locator and has a new pickup graphic
-Weapon sprite graphic appears next to the ammo in the HUD
-Rodian Bounty Hunters can now punch
-New player sprite, with crouching
-Replaced blurry droid decorations with new tech pillars
-Repeater's alt-fire is faster
-Heavy pistol fires slightly faster
-Key pickup messages changed
-Replaced sprites for skull keys with holocrons
-Carbine burst fire will stop if player is out of ammo
-Sith Reborn have darker uniforms
-Force choke "hum" added to Vader's force attack
-Royal guards have a little less health
-New stormtrooper hands addon (sprites by Burghard)
-Lightsabers can't be picked up if you already have one
-Repeater stormtroops and grey officers have a chance to drop a small shield charge when defeated
-New Reborn sprites by Burghard

4/2/2019
-New mancubus replacement: Zero Gravity Stormtrooper, similar to the mancubus but is able to fly
-Concussion commandos now have less health and spawn with Hellknights
-Phase 2 DT's no longer bleed
-Imperial Engineers now shoot ion shots and drop the DEMP blaster
-E-11 has a new alt-fire, it's a stun blast. It does little damage but stuns most enemies for a short period of time.
-Sniper rifle now has an alt-fire based on the beam rifle from classic BF2. It shoots a beam at 10 ammo cost. You can "sweep" your weapon while it fires to hit multiple targets.
-Oppressor can't shoot it's fire underwater
-Imported Dark Force's colored sprites of the mines and detonators
-Kicking a wall will leave a brief boot mark
-New grenade weapon : Remote detpacks, based off the ones from Jedi Outcast. Place a detpack with primary fire, they can stick to surfaces and objects. Explode them with alt-fire.

3/25/2019
-Edited the flechette launcher's pick-up sprite
-Fixed the spawn chance for Royal Guards
-Optional new high-res texture pack included (from Wardusted)
-Another new weapon: the Oppressor Flamethrower. Primary fire shoots your basic stream of flame, alt-fire spews a stronger flame that goes a bit further and bounces off surfaces. The flames DO NOT do any radius damage or leave burning fire on the ground, so it's safe to use in close quarters. Uses plasma cells for fuel. Spawns with the plasma rifle and goes on slot 7.
-Rodians are now tougher and spawn with Revenants instead of zombies. When hit with high-medium health, they make a glowy effect and barely slow down, only appearing to take damage once they're at low health. They also sometimes throw thermal detonators.
-New alien enemey, Kubaz spy. Stealth enemy armed with a blaster rifle. Spawns with Revenants.
-Stealth troopers have made a return. Spawns with Hellknights.
-Reborn acolytes now have less health
-Jet Troopers and Heavy Commandos have the "shield glow" when hit with high-medium health
-Charging weapons now use more ammo for higher charged attacks
-New anti-droid weapon: DEMP Ion Blaster gun added. More like the Jawa's gun than the DEMP2 from Jedi Outcast. It fires a bit slower than the E-11, alt-fire is a charge attack that leaves an EMP which does small radius ion damage (it'll damage you if you're directly in front of your target). Goes under the DLT in slot 4. Uses power clips as ammo.
-EE-3 Carbine is no longer an ion gun, but is now a bit stronger overall. It "replaces the elite rifle", but spawns with the supershotgun. Now takes priority on slot 3. I made this change because the weapon is now closer to star wars cannon and someone gave me sprites for the actual ion gun (mentioned earlier). I decided the carbine no longer needed to be an ion blaster.
-Fists now called "Unarmed", alt-fire does a kick attack, does more damage and has longer reach but you can't run around while kicking
-Heavy pistol no longer spawns with the shotgun, but is dropped commonly enough by enemies that it's still easy to obtain earlier on in most games
-Replaced the doom colored bryar pistol, fists and mortar gun with dark forces colored ones
-Added jedi outcast like helper remote droid and sentry turret items, spawns with BlurSphere.
-Added black suited "non-com" officers, which are the first type of officers seen in the movie, they spawn with zombiemen and drop blaster packs. The brown suited officers now spawn with imps/sarges and drop a heavy pistol
-AT-ST has a chance of dropping one or two pilots on death, AT-ST pilots have the HP of commandos but they shoot three round bursts rather than constantly shooting at you
-Palpatine has a flashy new attack, "borrowed" from the Overlord from R667
-Separated the replacement props into a separate add-on file

3/8/2019
-Lightsaber colors can now be chosen with the "Reload" function, going reverse rainbow starting at the classic blue. No more dropping sabers to keep your arsenal clean. New pickup graphic too.

-Added several new enemies Royal Guard, Officer Lady, Wampa, Rodian,
Imperial Gunner-Engineer, Imperial Medic, Boba Fett and Darth Vader
-Fixed the hanging tech sprites
-Replaced the lightning sprites with better ones (imo)
-Added friendly unit, Rebel Trooper. For now he can only be summoned through the console. Enter "summon rebeltrooper" in the console to summon.
-Made new weapon select sounds for the weapons that didn't have their own 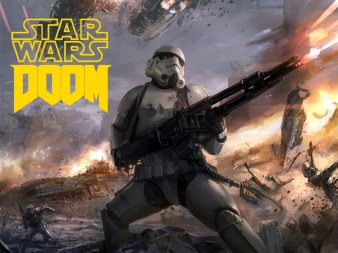 Had to do a bug fix with the Mancubus replacements not triggering the "Dead Simple" style map triggers, thus breaking some maps. It should work now. Let me know if there are anymore issues.