Doom 2016 weapons ripped from snapmap by AlphaEnt. It features frantic oldschool gameplay, as well as smooth rips, controls responsiveness and a (work in progress) arcade mode for extra mayhem.

Finally, after almost 2 years of hiatus...

Titan's open beta is soon to be released.

As some of you may be aware, i've been quite busy working on updates for several projects while being on quarantine: Quake 4 rip, Blorc, CSDMO, Akimbo 2, just to name a few.
That, and the unexpected attention Doosk got from both newblood and the press media, kinda made me focus on Doosk, more than this project.
Now that i've finished working on most of the previous mentioned projects, I can finally start working on Titan again.

Plus, the government started being less restrictive with the pandemic thing, so now I can travel to my friend's house and complete the last rips I had pending since 2019, right before the and my hard drive issues.

It's been a long hiatus, but now i've decided to finally update the mod with some features...

So, what can you expect from the Open beta? Well...

* Upgradeable weapons (with placeholder sprites, for open beta)
It's been so long since i've last updated this mod and the pandemic thingy affected us for so long, that i've decided to rip the weapon upgrades from my own computer, at expenses of low quality animations for the beta build.
The whole purpose of these placeholder sprites is to have the code for the weapons upgrades already done, so I can focus on making the "true weapon sprite rips" at my friend's computer, which means, I can save some time for futures updates, since i'll have the code done earlier.

The placeholder sprites were ripped at 36 fps on my computer, with some framerates drops, and the placeholders won't include optimized sprites because, well, they are placeholders and those sprites are meant to be replaced with high quality rips sometime next year.
(Sometime on february i'll go back to my friend house so I can continue the ripping work there.) 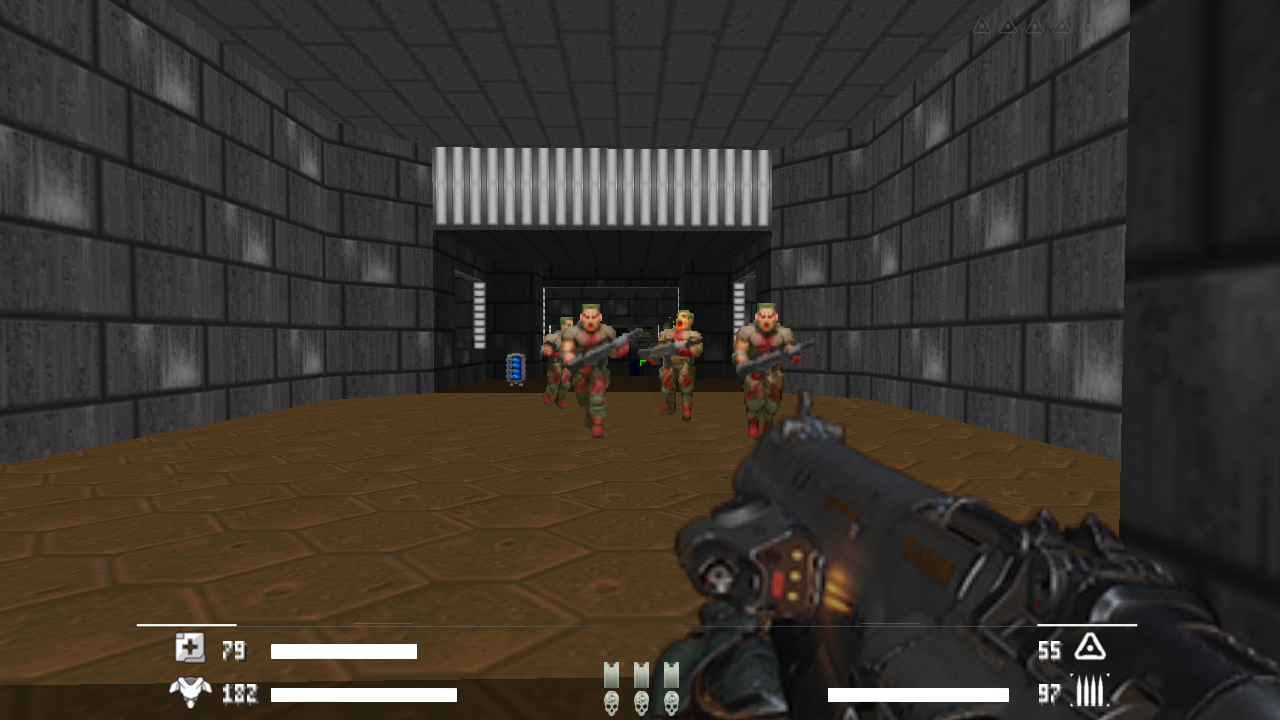 * Upgrade tokens / Upgrade menu
Ok, so how can I upgrade my weapons?
The mod will feature an upgrade menu that will allow you to choose which weapons you want to upgrade and which ones you want to buy, since the mod has so many weapon for so few weapon spawns.
These unlockable weapons aren't required to complete the campaign and they can't be picked up on campaign, so they're optional.

If you're playing on normal mode, you will obtain upgrade tokens by picking up keys, completing the level and finding all items/secrets.
You can obtain up to 9 tokens per map if you achieve everything and you'll be granted an extra token per key found.
So, the progression is finely tuned to unlock everything throughout a 20-30 levels playthrough.

Arcade mode offers an alternate way to upgrade your weapons, strictly restricted to your current arcade score and combos. So, the more you kill, the faster you will achieve the required high scores to unlock extra weapons, and the higher your 32x combo kills is, the faster you will unlock weapon upgrades.
In arcade mode, the weapon upgrades will be unlocked in a specific order and the upgrade menu is locked, so you better start making combos now!

Oldschool is an unique mode in which all upgrade mechanics are locked, so you won't be able to upgrade any weapon at all. It is oldschool after all =P 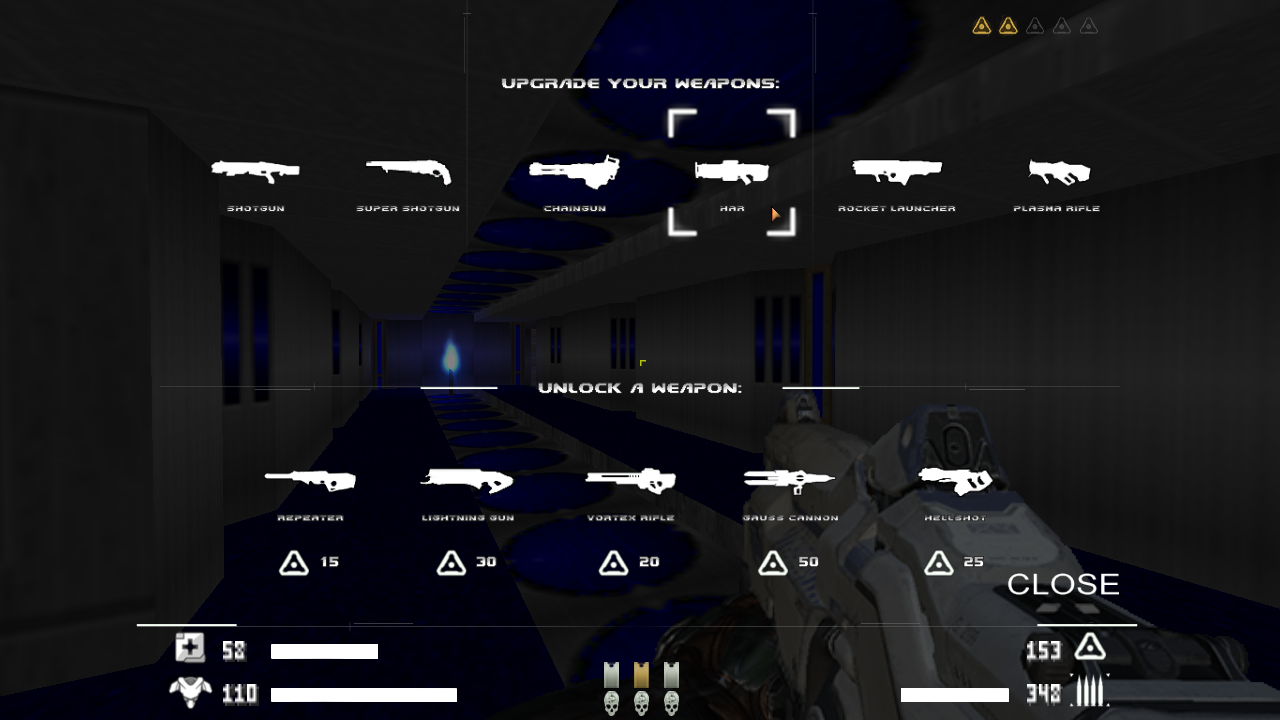 * Toggeable centered/angled rocket/plasma projectiles
So, i've got some feedback that people got annoyed that sometimes projectiles collided with walls if you were too close to them, sometimes damaging or even killing the player.
Don't worry, that annoyed me as well =P

Now players have the option to toggle between centered or angled projectiles for rockets and plasma weapons separately, that way it will prevent any projectile misbehaving while hugging walls at expenses of projectile spawning at wrong offsets, which is not aestethic. 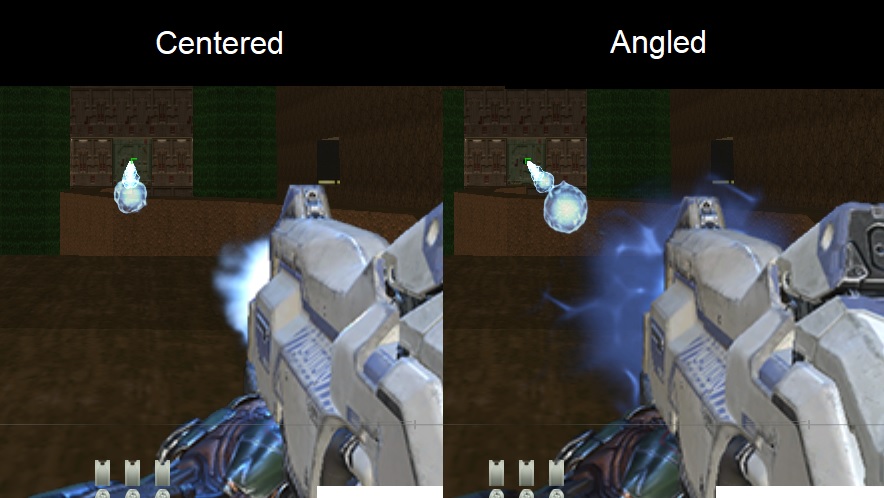 * Toggeable weapon hitsounds
You can make the weapon play a specific sound when a projectile or hitscan hits a monster, (or another player)

* Optional 360p sprites
It took me so long to update this mod for open beta that I've decided to release these sprites earlier as a reward for your endless patience.
Enjoy Titan's weapons like you haven't seen them before: at less chunkier resolutions, the right balance between quality and performance.
The mod will now feature optional 360p sprites, for those who have powerful computers that can handle high resolution sprites.

Be aware: Since i'm releasing this high res pack earlier than intended, some things may change on later versions of the game, like weapon upgrades sprites and stuff, therefore this optional pack might not work on future updates. If that's the case, then download the file again, I will most likely reupload the files each time they get updated, until they reach a stable state where updates will no longer be required. 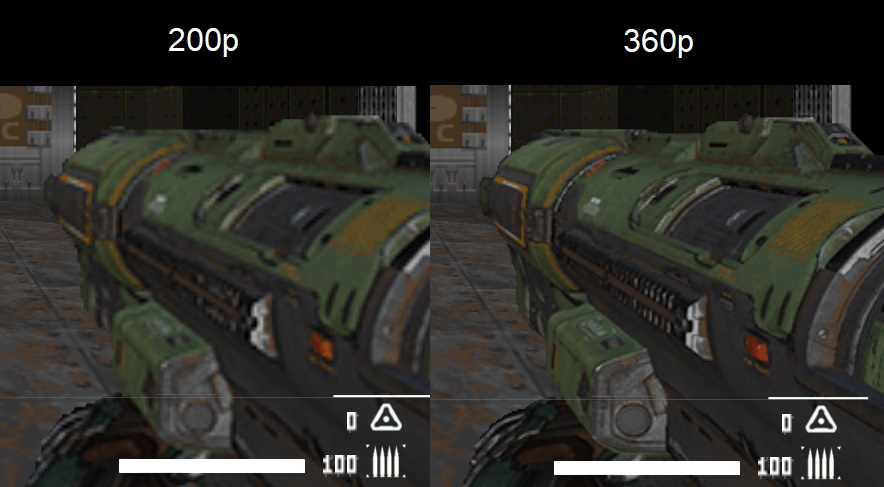 * Zandronum support
Although this mod was designed with singleplayer on mind, the mod now oficially supports zandronum sourceport, therefore, you will be able to enjoy some fragfest with your friends, or something.
GZDoom is still suggested for singleplayer experiences, though I wouldn't blame you if you want to play skirmishes with bots.

Oldschool mode is unique in the sense that all weapon upgrades will be locked, so you can't upgrade your weapons.
Also, quick switching, weapon melee and grenade throwing functions are disabled and you'll have to wait until weapon's fire animation is completed to switch weapons, so we're going full deep into the oldschool experience.
For those who wants some extra challenge or are too oldschool for their own good, like I am sometimes =P 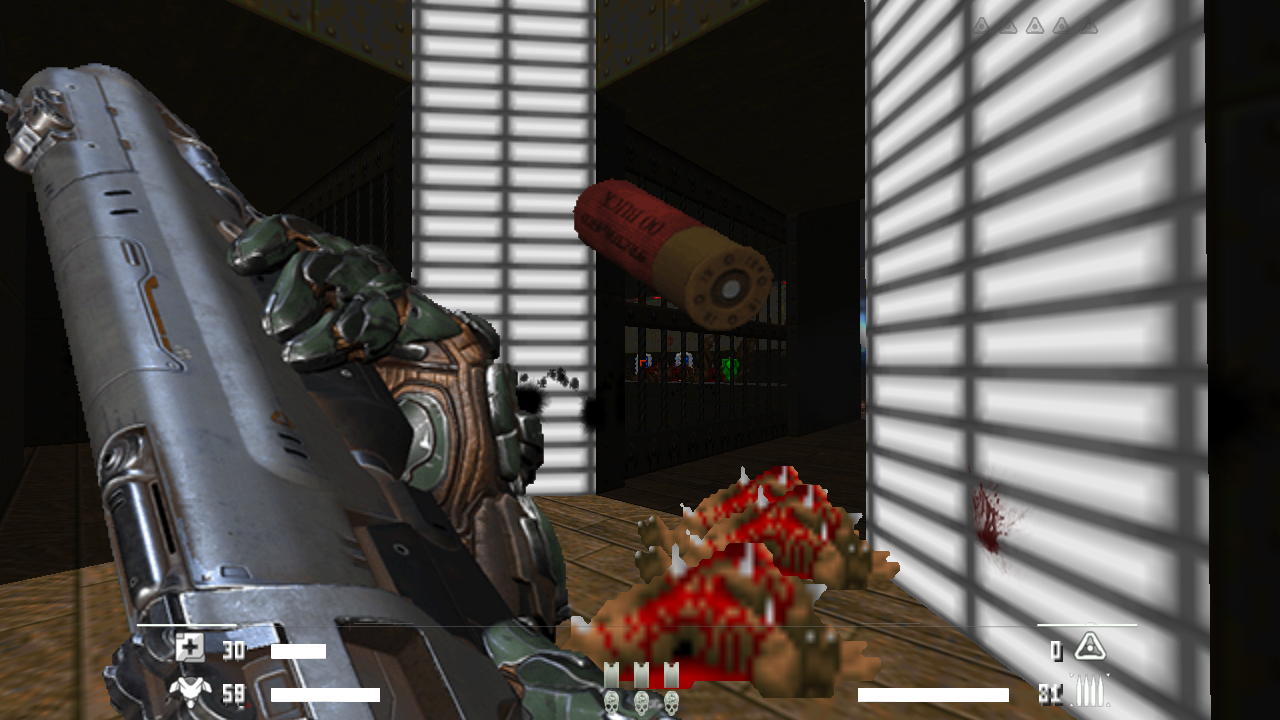 But wait, I hear you ask, Is that all the mod has to offer for me?
Will I have to wait again another two years for the next update?

Welp, worry not, because i'm about to tell you when this update will be released.

That means, you won't have to wait that much longer for the upcoming update.

Then, what to expect for the future of this mod?

* For 2022, I want to have all weapon upgrades completed.
By that I mean, delete all placeholder upgrades and replace them with finished and polished sprites.
Then, once all placeholder upgrades were deleted, release the optional 640p sprites, with even higher resolutions for the "top of the line" computers that can handle them. My computer can't handle them, so if you can run them no problem, then you can say you have a better computer than mine =P

* On later years, I hope to have optional Doom 2016 monsters.
Yep, I'll be working on them. I might not have all the monsters, but I'll try to achieve a nice monster roster.

Ripped at 18fps, to save some filesize while also keeping them smooth enough, at a decent sprite scale. 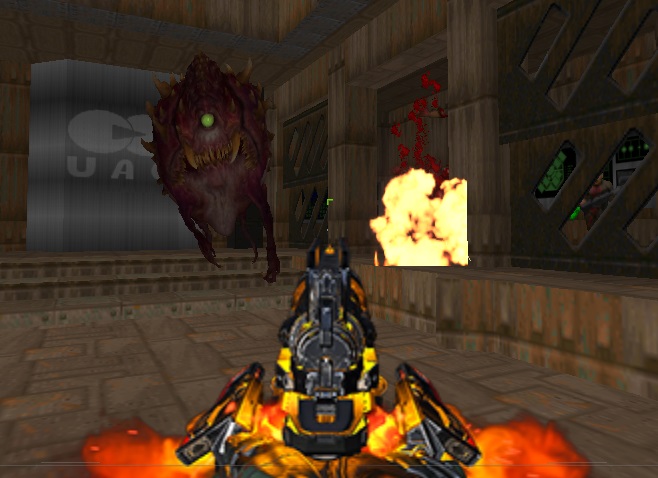 So, i've found a serious sam 3 mod that allowed me to play with doom 2016 monsters. It just so happened that I own serious sam 3, so I've opened the editor and to my surprise, the internal model viewer allowed me to see the models, so I thought they look good enough and they were very rippeable. So, I will give them a try, but custom monsters will be a feature for a very far future, so don't expect them for 2022.
So far I have only completed two monster rips: Lost soul and cacodemon.

Then, after monsters are done, then I hope the mod will have a custom mapset? Question mark.

It is something I would like to have, but i don't know how capable I am to make a custom campaign like that.
Worst case scenario, I could use oblige or ask for someone else if they allow me to use their campaign as an addon or find anyone who wants to create a custom campaign for it, or something.
I still haven't finished the mapset I had planned for Doosk, so I will most likely focus on those maps first, then see whatever it happens for Titan.

A mapset is very unlikely to happen, but it is part of the plan. I wouldn't expect that anytime soon though, if ever.


So, this is the current plan for Titan. There are several more updates planned for the future.
An update coming this year and another upgrade granted for 2022.

Don't worry, I won't make you wait again another 2 years for next update. You might have to wait that for the monsters though, who knows?
Ripping monsters is a very difficult task, and I'm one person doing it. Also, i don't get paid for it, so this is a very passionate project of mine that I enjoy making it, even if it takes me years to update it.
BTW, sorry for the long delays and silence kinda got overwhelmed working on other projects, one of them I haven't announced yet =P

And merry christmas, or whatever holiday you're into =P

Titan's open alpha is closer than ever. I've crunched quite hard to get this done as soon as possible, yet there's still a long road to go through. Although...

Finally, titan (open Beta) is released. A Doom 2016 weapons rip made by AlphaEnt. It features most weapons from snapmap, an optional arcade mode, partial...

Optional 360p weapon sprites, for those who wants to play with Titan's weapons at better resolutions and have computers that can handle sprites at higher...

A fork of the mod, specially made for D-Touch, with reduced animations to further improve performance on low-end cellphones. It also includes few weapon...

Finally, titan (open Alpha) is released. A Doom 2016 weapons rip made by AlphaEnt. It features most weapons from snapmap, an optional arcade mode, partial...

Not sure if I'm doing something wrong here, but I can't seem to pickup the combat shotgun or plasma rifle. Additionally, typing "give all" excludes those two weapons from the arsenal. I don't have any other mods loaded and even digging through the pk3 doesn't reveal anything particularly out of place. Thoughts?

This happens to me too! I hope this gets fixed if it is a glitch in the mod

It is a glitch and I think i might have found the cause, most likely some missing sprites after I moved the idle animation outside of the mod.

Just to be sure, try to load the nod with the optional idle files too, to see if that fixes it.

How do i change weapon mods

If you mean the closed beta, then you have to manually bind a key for it. It has no key by default, I think.

For open alha, there are no mods and for upcoming open beta, i guess r or v could work. Still manual binding would be suggested

will it be zandro comp ?

it's on the plans. For open beta it should.