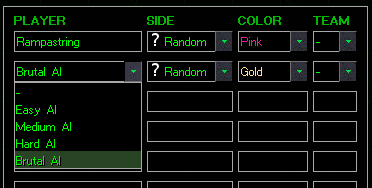 Hey that's quite impressive! Things keep getting better and better on these old games!

That's the point, I presume

We've recently encountered a new kind of a problem. Some of our players have grown so skilled over the years that our Hard AI has become too easy! We've actually been able to defeat it in our co-op games.. like 75% of the time!

To solve this, we could've just made our Hard AI harder, but that could've broken some of our missions that rely on the Hard AI. Some of them are already quite extreme after all!

However, once you lack challenge, you start to stagnate. And we're thinking of your best - we don't want you to stagnate! To allow you to push your skills ever further, we're giving you a new opportunity to fight against an even harder AI! This new Brutal AI developed by the DTA R&D labs has an equal intelligence level with our Hard AI, but we've upped the cheating factor on it a bit: it has a build-speed bonus that cuts 35% of its production time for anything. For example, if producing a tank took 10 seconds for you, this AI should be able to produce it in 6.5 seconds. Otherwise, it should behave roughly identically with the Hard AI.

You will receive this new AI difficulty level with the next update.