This is the original Harlequins Race mod for Dawn of War which has been handed down to a new team to complete. This mod is for Dawn of War: Soulstorm and adds a new playable race to skirmish and multiplayer, featuring new models, voices, AI and Heroes compatibility.

Installation
1] Just uncompress the archive in your Soulstorm installation folder.
2] You will also the Objective Points mod!

This is the first public beta of The Dance Macabre: Harlequins modification for Soulstorm 1.20.

This mod has a long history, starting right back with winter assault. The mod was left abandoned and the assets public released, however it was then revived by a new team who have taken it further towards completion. 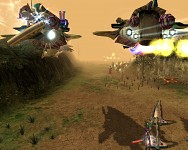 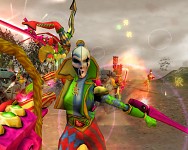 Our team is currently very small, consisting of Undirector and fuggles working on the code and with two testers. Where we can we are beg/stealing/borrowing 3d help and jONES1979 kindly helped out on more than one occasion but we lack any dedicated 3D/OE/FX support, which sadly will hold the mod back from being a completely polished. The known issues on this front are small, but sadly currently unfixable. In fact, one of the key reasons for the release of this build is that the current team feel they have pretty much taken the mod as far as they can and so please consider this both a fully playable race mod and a cry for assistance! 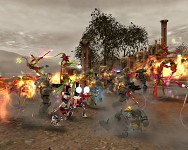 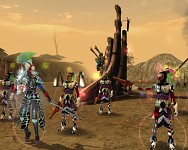 We were unable to get completed voice acting ready in time for our initial release date and now this has been pushed back by another 2 weeks, so rather than sitting and doing nothing, we thought we would let you play.

We hope you enjoy this modification as a lot of hard work has gone into it - Let us know what you think and then look out for version 2!

The first public preview performance has been scheduled! The time of the curtain call is fast approaching...

This is a warning to take your seats - the performance will be starting soon!

There are a number of Soulstorm race modifications available on Moddb, so I've put together a quick guide of the available ones, as well as the Unification...

The Dance Macabre Modification adds the Harlequins as a new playable race to your Dawn of War: Soulstorm 1.20 game. The Harlequins are a mysterious faction...

The Dance Macabre Modification adds the Harlequins as a new playable race to your Dawn of War: Soulstorm 1.20 game. The Harlequins are a mysterious faction...

A multiplayer map for Dawn of War: Soulstorm. 512x512, 4vs4 map heavily biased towards infantry given the nature of its surface. Despite that, majority...

The most known community map pack of the past decade, age of glory of DoW modding. Uploaded 17-11-2006 on DownOfWar.FileFront.com. Now saved on Moddb.

Here is one of my(Skinne) old maps that was kinda popular. I(Skinne) decided to put it on Moddb, since most of the old links are no longer available...

Hello. You have a great mod. However, after playing with the bot, when exiting / restarting, I get a Relic error. I play in conjunction with the mod unification

Hello Gambit, Great mod but I was wondering If you can make an early game Troup leader be a stand alone unit that knows dance of death just like the vanilla game harlequin and can attach to units like a commissar. dance of death is my fav game ability and I wish more of these units had it. just a little thing great work nonetheless the aesthetic you did perfect even down to the HUD wp!

just figured id give this a try, running into an issue with the names of everything for this mod being $ random numbers. same with emperors children. any thoughts?

You are my heroes!

Is it possible to make some units smaller in the Army Painter? Especially Mimes, Shadow Dancers and Bards? And maybe, possible, make Wraith Walker bigger? Right now it's pretty hard to view those models.

I understand, but ... it is kinda of a luxury brother Luntek.
And we have so many mod we are working on, we cannot "perfect" the parts that we can "let go".

I understand perfectly. If it's more time consuming (tbh I don't know a thing about DoW modding) than simply setting scale in the editor, then there's no need to bother. Just throwing suggestions out there. Don't want to be/sound needy.
Thank you for all the work you do for the community!

Well done for a Start!