This mod is being developed by a single user on his spare time, it is not dead as it is a personal project; but you should not expect lots of posts or media.

This is an Extension Mod for Starcraft II: Legacy of the Void. It'll be available on battlenet during next summer. The name for the extension mod is:

Make the game more realistic in terms of lore and strategy, while creating new opportunities to improve and expand the gameplay.

Currently a major revision and internal testing is being run in order to make sure everything’s right before launch. After the melee mod is done, work will continue on a single player/co-op campaign.

This Mod is based on (but adjusted for playability) on Xiarobear's Starcraft scale charts (https://xiaorobear.deviantart.com/ ) and also contains several custom units from the map community.

Special Thanks to GhostNova91, Hammer, Solstice, SoulFilcher, Delphinium and NanaKey for the models, icons and wireframes and Kailniris2 for awesome bridges and custom battlecruiser!

Alex06, Rikki333, for the icons, TooMuchTuch for decals, Thrikodias(Forsworne), CybrosX & Gradius for great models and textures, Flink links for icons and wireframes, XLIIVI for some amazing abilities and to all SC2 Mapster community for different spells, tutorials and ideas wich made this possible.

It's been years since I last posted on this site, but I just wanted to let you all know that I'll be publishing the final version of the mod during next summer! 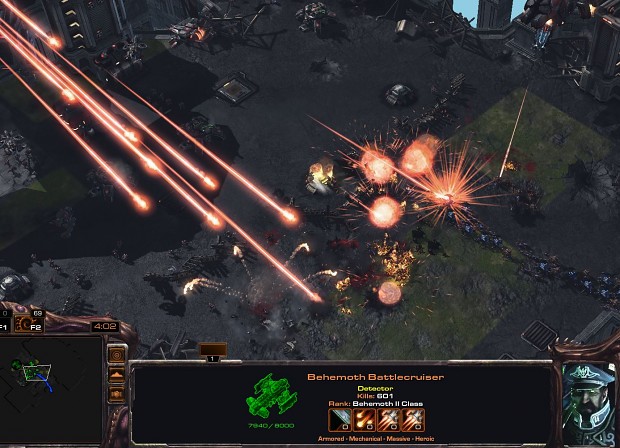 Even though I only work on this mod in my spare time, I'd like to remember everyone that this is not a dead mod as it is a personal project. Once the mod is launched, I'll be moving forward into the campaign part; the mod's also been developed and tested within the campaign maps.

The mod is released to the public on battlenet. I'm currently working on the co-op campaign with this mod. There are several melee maps live right now...

So can anyone tell me where can I find a link for this mod ?

What is with protoss starport? I can't bild them anywhere.

Everything tweaked to its canonical scale?
Awesome!

Assault vikings will be so scary now!
In game they don’t do too much but when you look how large the vulcans actually are.....
Well marines, zealots and all light ground beware.
Damage change to widows will be also something interesting.

Photon canons are something i am curious about. Will they be small or gigantic? I guess we’ll find out. Unlike battle bunkers, canons will be harder to estimate.

On European or American server, as an extension mod. You select a melee map, click Create Lobby with Extension mod, search for SCII RS Extension Mod and then create the lobby with that mod.

it works with AI?

Yes, infact it works really well. But the a.i. doesn't use many new abilities like the invulnerability or building shield from the nexus, they mostly only use new good abilities if they are on autocast by default.