Our project it's a cumulative patch that brings several major improvements for PC version of Resident Evil 3: Nemesis.

3. Press the "Browse" button to locate the setup directory of the game.

4. Wait for the setup to finish and run your game.

El Sanchez and Sergey3695 for help with installer.
"Russkiy Videomontazh" group and personally to Evgeny Notarev,
who helps me a lot with creating RE3 logo for intro video,
MartinBiohazard from Re123.bplaced.net for Press Office fix.

I guess, I don't have to explain you the differences between colour depth. Though, I must notice that RE3 has a good bunch of 32 bit graphical resources, such as backgrounds and FMV's, but unfortunately game always display them in 16 bit colour, no matter what you choose in game settings. In this update we can finally see FMV sequences in full colour. However, backgrounds still remains in 16 bit, sadly. 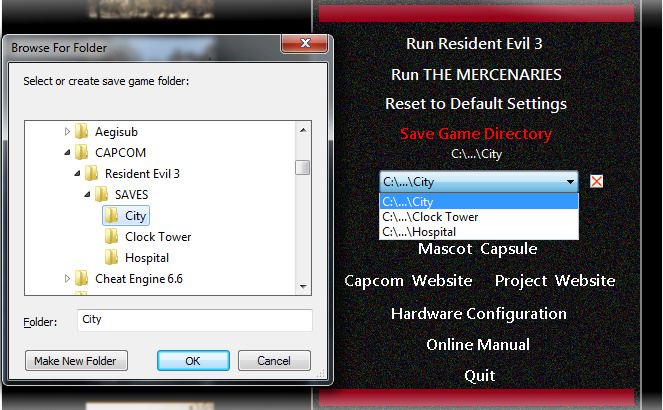 We also prepared French and Spanish project versions + special version with English subs for people with hearing problems. Everything's ready basically, it only needs to build an installers. I hope it sees the light in the nearest time. Cheers...)

Since version 0.7 was released we've got a big help from one interested user named RhymeKidder. Thanks to him, as you may notice, the PSX version has...

This PPF patch brings fullscreen SourceNext movies + Flying head fix in PSX RE3 USA version. It can be installed only on clean game image, it's incompatible...

Thanks for making this patch. I recently played RE3 again for the first time in decades, and your patch allowed me to play it on a modern machine in all its glory (new machine hasn't got a CD drive).

I really appreciate that this patch isn't doing anything funky, but is just retrofitting higher quality assets and fixing bugs. Makes it the best version of RE3 out there yet it's still very much the original game.

Okay, so I wanted the patch, but we definitely have different opinions on the cutscene issue, so to each their own. So I tried to copy the 30 fps movies from the sourcenext version into the patched USA PC version. So I deleted all the movies from the patched USA PC version's movies folder and pasted in the sourcenext movie files from that zmovies folder. The movies played fine in my media player in Patched USA and Sourcenext, but the opening montage movie didn't load and just cut to the title screen in-game in Pathed USA PC. Also, the UBS Movie after Jill's montage and the Nemesis introduction Movie were black for the first few seconds and then started working properly at 30fps every time I tried, so I'm assuming all the other movies in-game will have the same black screen issue. Any explanation/possible fixes? Thanks

Any way to use the Sourcenext 30fps cutscenes instead? It simply looks better than the choppy 15fps version. Especially since the game itself runs at 30fps.

Also, how about the dithering effect on characters? Can it be removed like they did for the Gamecube port?

Final Fantasy 8 movies also looks choppy for you? SourceNext fmv's looks smoothly, but who says that it's better for RE3? Capcom? SourcNext? You? I'm not sure that original game devs made decision to re-release game with 30 fps movies. Many people also like original 15 fps framerate. And how many times I should repeat that I DON'T MIND. JUST DON'T HAVE TIME FOR THIS RIGHT NOW.

honestly, I think that you should release a patch where you can replace the zmovies folder with the 30 fps cutscenes so you don't have to worry. You can also fix the glitch where when people put the FMVs in themselves.

what a nice and helpful comment he asked you about the movie files and not your opinion.... people these days

I love what was done with this restoration project but I have one project.
I prefer the look of the 30fps FMVs on the SourceNext version.

15fps FMVs either look like it was gimped by PS1 storage/hardware limitations or CGI trying to imitate stop-motion, and doing it poorly.

30fps has better movement and looks more true to the original intent, seeing as how it's basically a glorified expansion pack to RE2, which had 30fps FMVs even on the PS1.

15 fps FMVs was on PSX not because some technical \ space limitations or things like that. PSX ver. has more than 100 mb of free space. We can put 30fps FMVs into it even in fullscreen without any serious problems or loss of quality. Remember how 30fps movies works in Tomb Raider Chronicles and it looks great.

Let's remember 30 fps cut-scene in the beginning of Tomb Raider 2, while all other fmv's was in ! 15 ! Why so? In Dino Crisis 2 we have 30 fps video sequences in the whole game except ! one ! 15 fps fmv when satellite kills T-rex. It's all artistic decisions. Its better to accept that. So sad that people don't even try to get it...

The reason why they made it in 15 fps, from my perspective, is because RE3 videos looks great in this speed. 30 fps kills all its cinematic, suspense, dynamic, direction etc. It's like if we convert RE2 FMVs from 30 to 15 frames, it would kill everything.

Besides, we can't talk seriously about technical \ space limits since we have Dreamcast and PC ver. original ports, which don't have any hardware \ disks limitations, but has the same 15 fps FMV framerate. They include 30 fps in Gamecube and SorceNext versions only because they don't have any noticeable changes for that modern platforms. So they decide to pull the wool over fans eyes by this trick and looks like it still works. I don't mind to made 30 fps ver. Maybe when I have some time... )

Yeah 60 fps feels like overdoing it but i doubt the author will change his mind given that this version is out already.

Also agree with a previous comment about joining up with Appleofeden.de-doc.com

Resident evil 3 : The only one [PSX mod] Resident Evil 3