The last remaining memories fade away into darkness. Your mind is a mess and only a feeling of being hunted remains. You must escape.

Amnesia: The Dark Descent, a first person survival horror. A game about immersion, discovery and living through a nightmare. An experience that will chill you to the core. You stumble through the narrow corridors as the distant cry is heard. It is getting closer.

Amnesia: The Dark Descent puts you in the shoes of Daniel as he wakes up in a desolate castle, barely remembering anything about his past. Exploring the eerie pathways, you must also take part of Daniel's troubled memories. The horror does not only come from the outside, but from the inside as well. A disturbing odyssey into the dark corners of the human mind awaits. A sound of dragging feet? Or is your mind playing tricks on you?

By using a fully physically simulated world, cutting edge 3D graphics and a dynamic sound system, the game pulls no punches when trying to immerse you. Once the game starts, you will be in control from the beginning to the end. There are no cut-scenes or time-jumps, whatever happens will happen to you first hand. Something emerges out of the darkness. It's approaching. Fast.

Amnesia: The Dark Descent throws you headfirst into a dangerous world where danger can lurk behind every corner. Your only means of defense are hiding, running or using your wits. Do you have what it takes to survive?

Today, we have a few items; we're nearly touching the light at the end of the tunnel, yep, that's right!
Isn't that great?! 😼
We will discuss about what is left to do but also see examples of super-efficient optimizations that have been realized for the next build, continuous improvement of Forbidden Trip in general. Have a good read!

Note: If you really like what I'm doing on my free time, you can send a tip!
You will receive major content updates and also exclusive contact with me; check Patreon!
Enjoy! 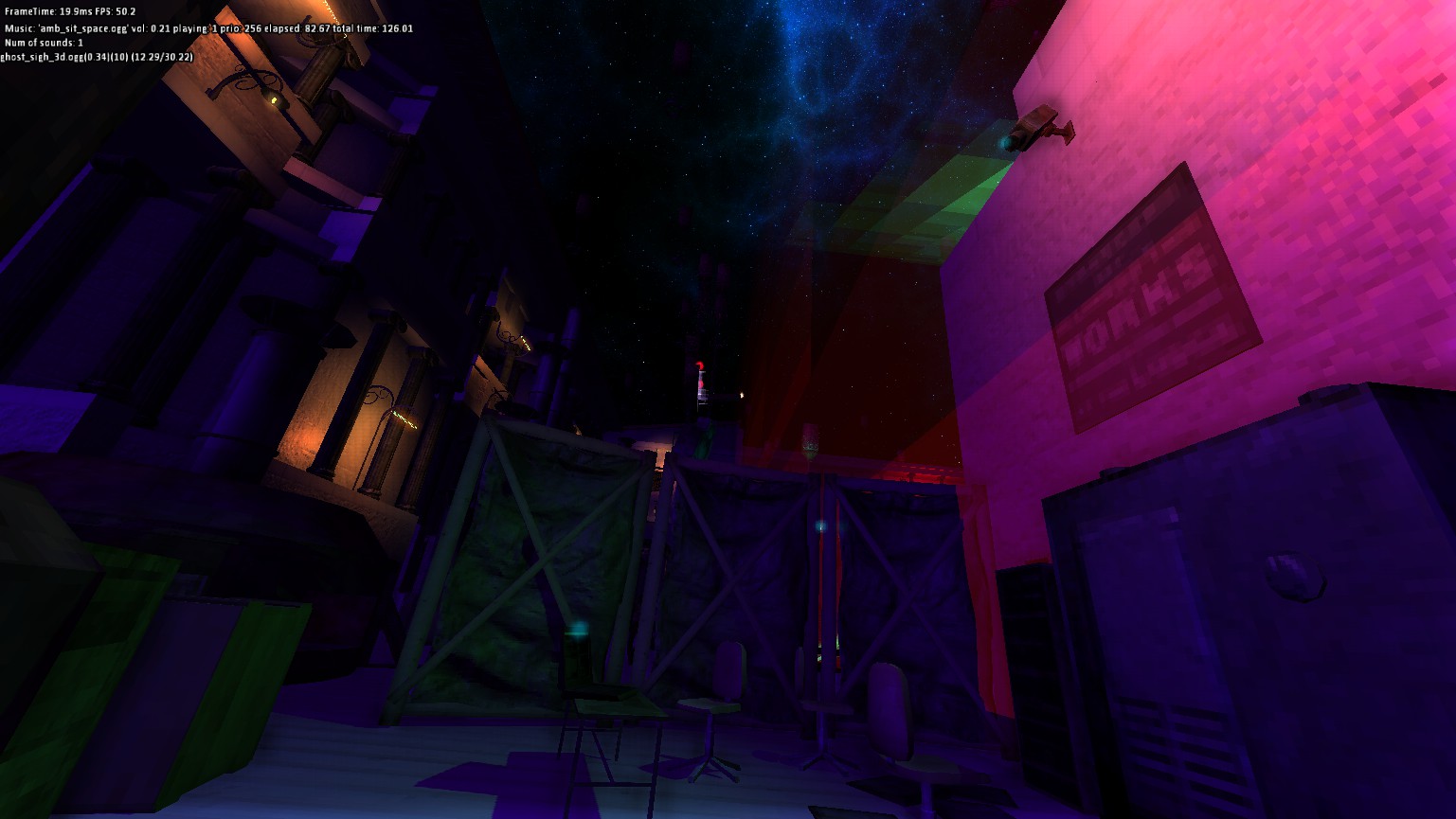 Good news: the next 1.5 build of Forbidden Trip is nearly ready!
At the time I'm writing those lines, some work is left on two maps, with some events/puzzles to finish.
I have added more puzzles than expected since the previous news; my creativity has exploded during last weeks, I can promise you will be surprised with the new chapters arriving! 😄 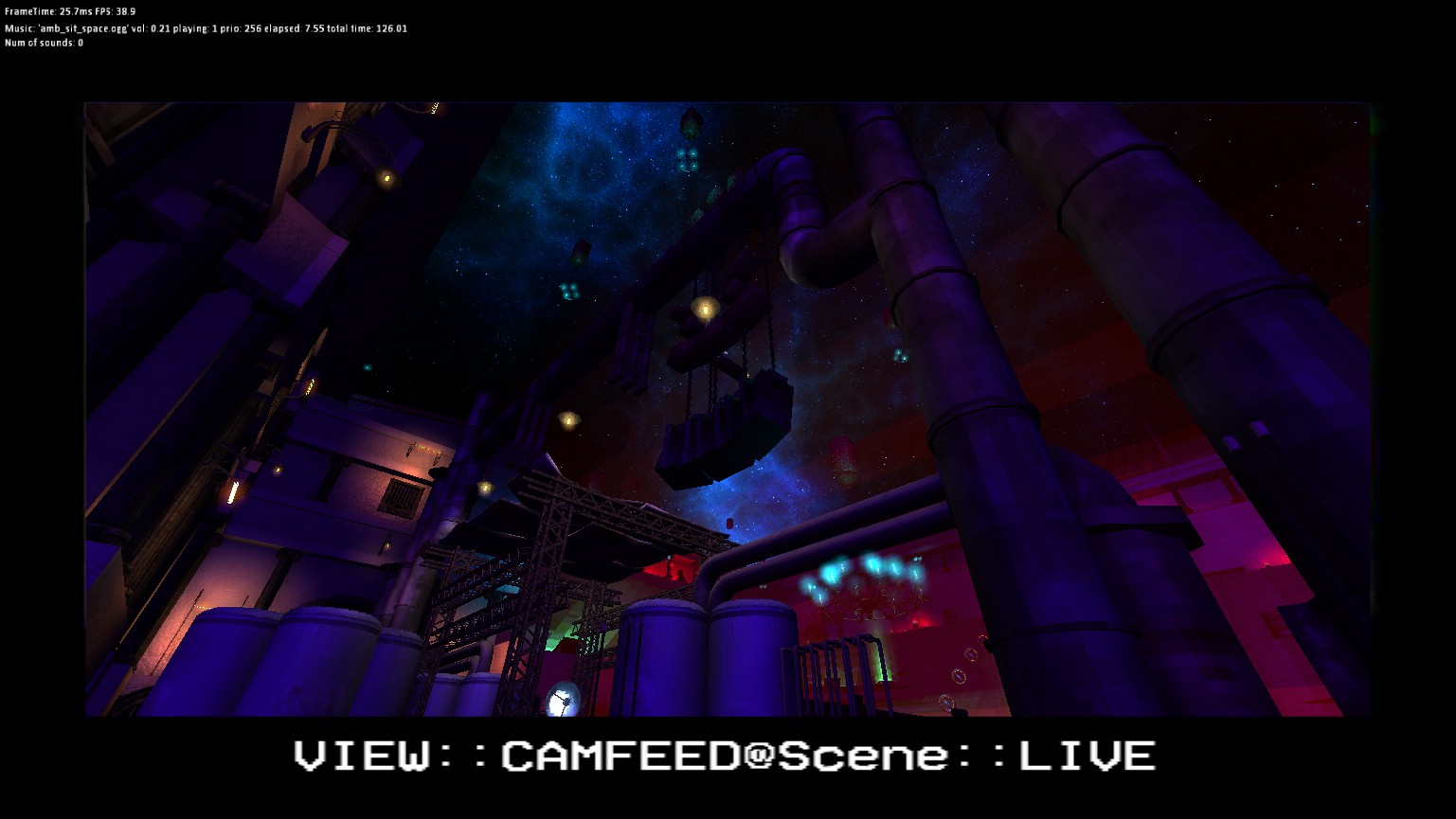 Not much is left. After that work completed, I will finish implementing checkpoints and other technical necessities (so the Nightmare Mode works properly i.e.). Then it will be time for polishing, playtesting…
Update will be released firstly on Patreon and for tester team, then on Mod DB (~1 month later).

Finishing the 1.5 content update and its new chapters does not mean I did not improved previous levels. Let's see that!

As hinted in previous news, improvements were made in the lightning department.
There are now better, smoother; I reworked of a lot of them!

As you may know, some maps are very large; it also means lot of light systems.
Before, I used to make lights generate shadows, static but especially dynamic shadows, to create realistic scenes. I changed the process: I created new gobo textures. To resume, it simulates light projection & shadows, it consumes a lot less power, meaning a huge FPS boost even on the largest maps, be it in old-school or regular visual mode!
The difference is really impressive, I should have done that for a long time! 🤦‍
Have a comparative shot; don't mind the difference of size of light & shadow, it was the first test from last month. Behind-the-scenes pic, gives you an idea. Good rendering in-game. 😉 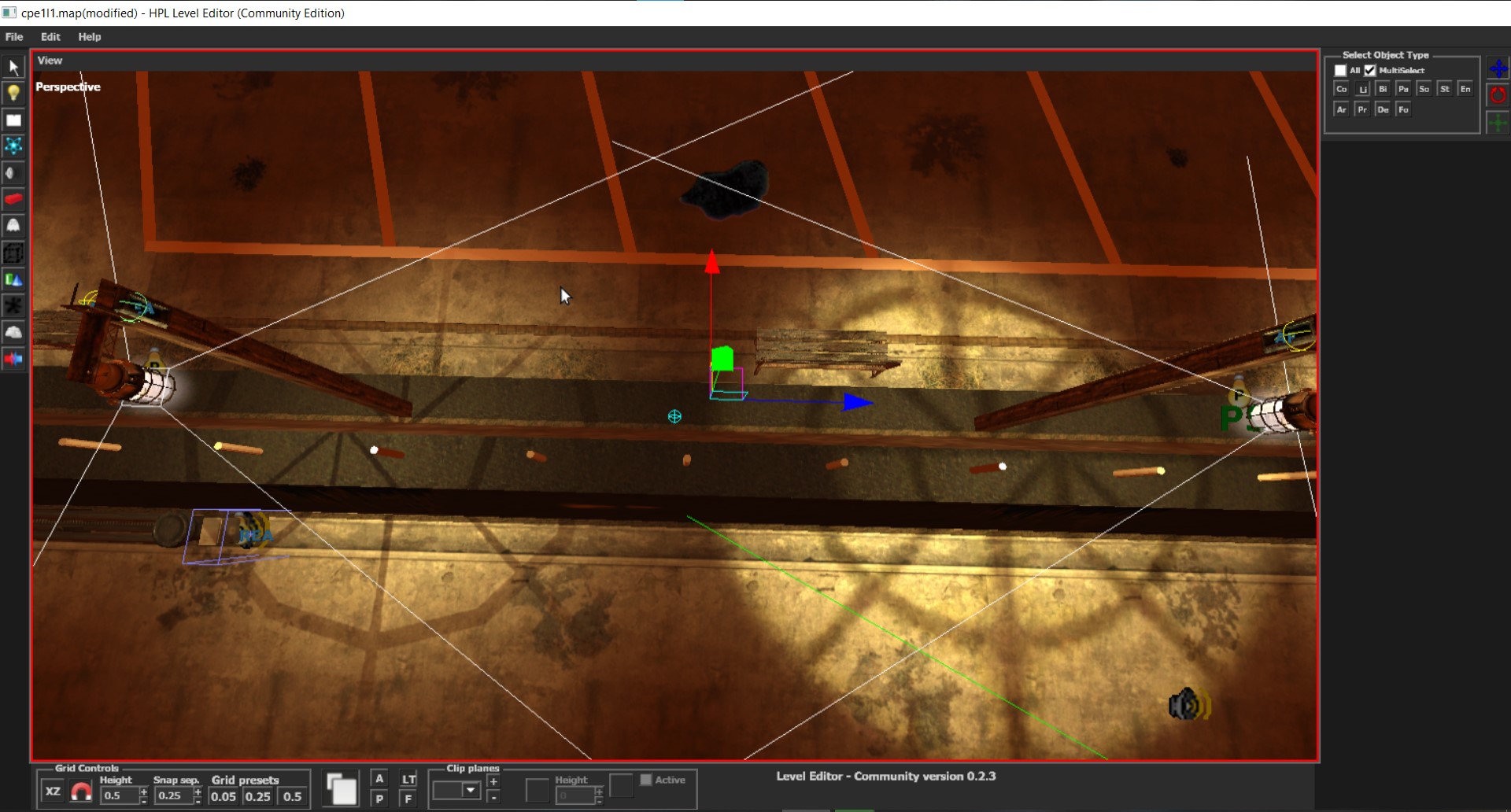 I'm really happy this was achieved, same for smooth light transitions & changes; day-night cycles, this kind of effects. Good work was continued for particle effects too, and more. ✅

A lot of new content comes with the new chapters of course, some totally original, some that will, maybe, remind you memories. Won't say much more for now… 😏 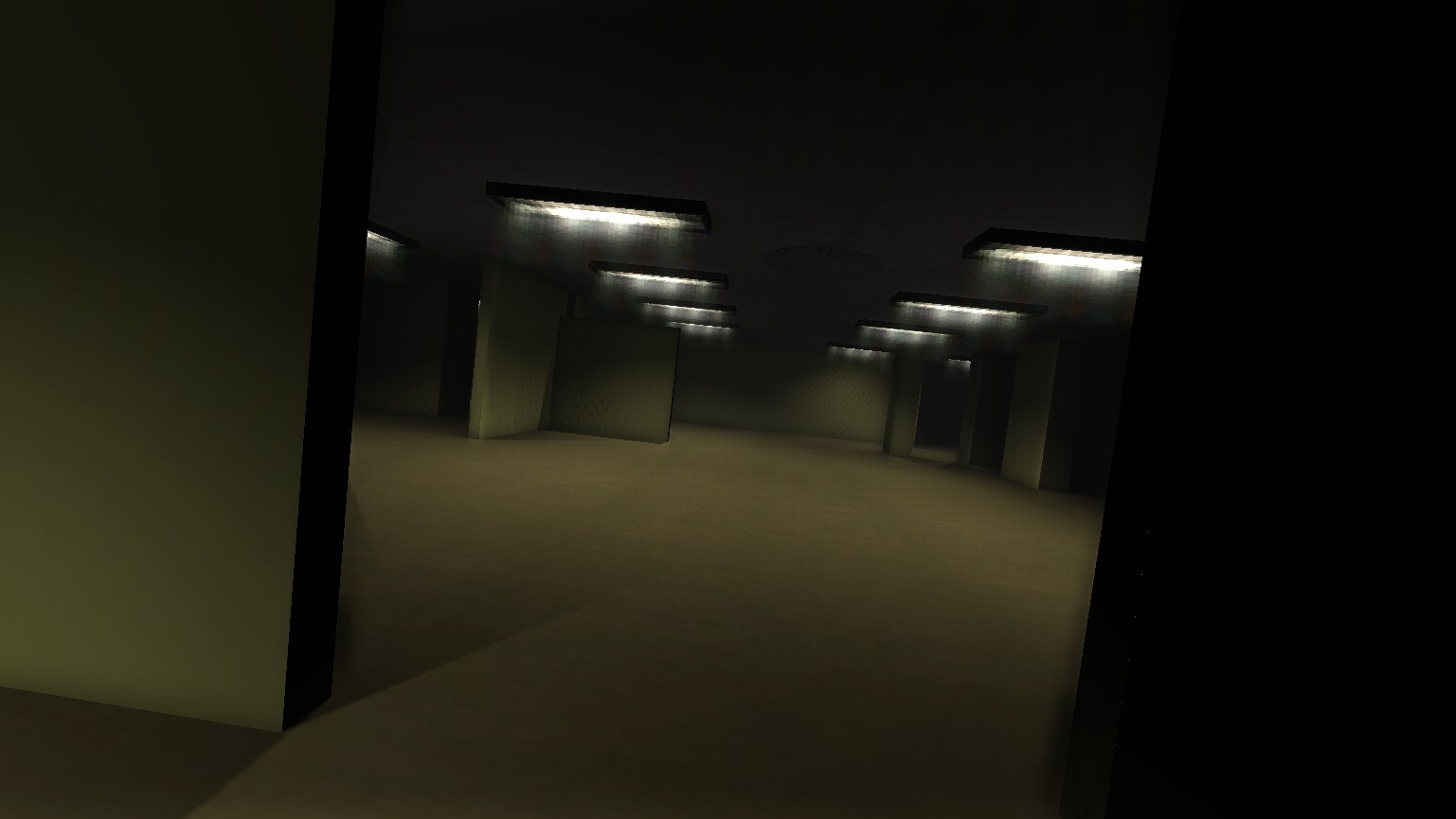 With the Forbidden Trip 1.5 Early Access being soon ready, I'm targeting a private release in July 2022, for my tester team & Patreon supporters! I'm confident enough to do something I never do: give an estimate date! 😹

Public release of Early Access 1.5 should be during summer 2022!
I'm thinking about a strategic release of the final build for next October. 👍 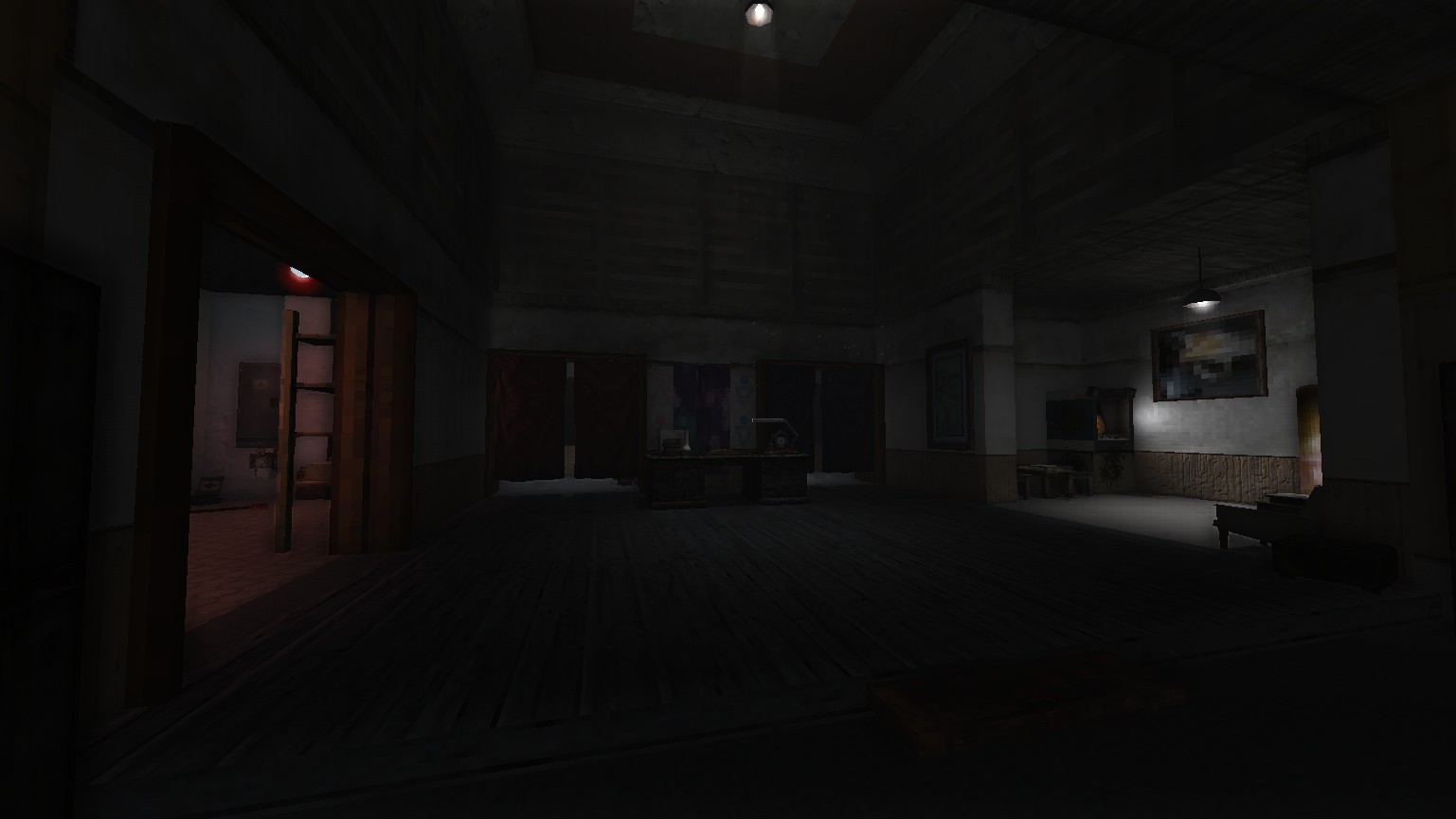 In the meanwhile, have a great weekend stalkers!
Be sure to follow the page to not miss the release! 📡
Take care! 🤟

Status report of our ongoing progress regarding our project.

Hello my stalkers! I hope you are doing fine! Today let's publish a little media update with quick news.

Hi guys, as we are continuing to develop our story, we would like to show another of our early levels. Hope you like it.

Hello dear stalkers! Today, let's read some quick news about the development of the next content update.

The zipped/portable version of Melancholy for Microsoft Windows without any extra shady installer EXE stuff. To install it just unzip it to anywhere and...

The Scape English Edition by cristofergamer36

In your camp you decided to sleep to replenish your energy, in the middle of the night a strange sound wakes you up in the bushes, you get up look what...

Latest version of the HPL Editor Suite for Windows, taken from Frictional Games' wiki. Do not use if you have Amnesia versions 1.2 and earlier

Older version of the HPL Editor Suite for Windows, taken from Frictional Games' wiki. For historical and preservation purposes, do not use if you have...

This is the full version of the mod originally made by Spacod. This is downloadable in the description of one of CrazyShootin's videos, however it appears...

I think this is the most ****** up community I've ever seen in my life. The moderators didn't care at all. Banning accounts is not an option! They still use VPN to create as many as they want to do some **** again.

Why "lester79" got banned? I want to download his cs!

Wait really? I still have 3 Acts of Night of Anorland and The Cellar in my disk
I don't know if there's more mod from him that I missing

my custom stories shall return once my ban is lifted, there will be a cellar remaster and the last legacy is still bound to release in the future.

If you want to play my custom stories, add me on discord Lester#6686 and i will send them to you.

There's nothing I can do other than to lament the entirety of this game's modding community. And sadly, I don't think it's getting any better the more I look at its current state :/

Oh well, it's about time we watch the world burn then...

there are so many other games and mods to play and communities that don't wage war with each other.
The Amnesia community has never grown, it has remained at a very low level. Kids who, despite being good, argue with each other.
The people who remain are just the few amnesia fans or those like me who can't afford a new computer to play the new game.
All this is pathetic, it is a war between poor people.
Translations uninterrupted all the time, in an attempt to be the new youtuber.
All this is pathetic, immature.
It is a kind of asylum, where the best who builds the best buildings are destroyed by the envious who just want a slice of bread with Nutella.
This all sucks. And it smells like milk.
Big babies

This translation spam madness needs to stop. Everything that's new is getting buried by Russian translations. What is the point to make anything when everything gets buried like that?

Definitely :) since you posted this comment, there are like 15 new translations.. Any new mod will be buried.. They should be added to Addons- or the mod itself should not be moved to the top of the list.. Translations are great but this all is disgusting :)

^This. Hard to find anything in this madness. Translations should get a dedicated page and only be published there so people who care about a specific language would be the ones receiving notifications. New mods are a different case as it's still something new but I don't get the point when it comes to reviving tens if not hundreds of 2012-2018 mods if there's no new content or bugfixes. Right now, being subscribed to the game itself is more or less pointless.

If you like dark atmospheres and intense plots full of suspense and psycological terror, such as those found in games like Silent Hill, Diablo 1,or S.T.A.L.K.E.R SoC, then this is the game for you.