Expanded Menu bring many new features and fixes to Jedi Outcast through a new reworked interface, and exploit the full potential of the base game engine possibilities. 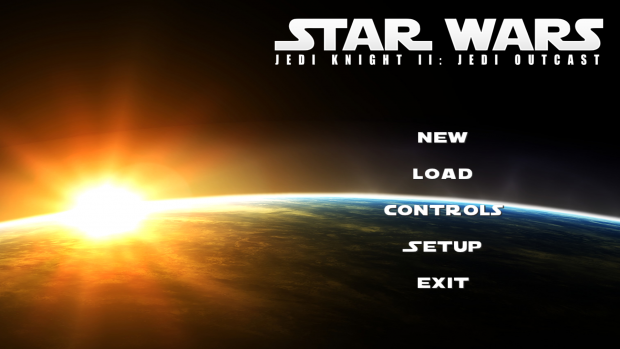 The purpose of this mod is to use the full potential of the base game engine possibilities.

Expanded Menu comes with a lot of new features just waiting to be discovered...

Play to Jedi Outcast with a modern interface, and unlock all the possibilities of the game.

Choose your game mission through a new menu, and access for exemple to the bonus missions on Alzoc III or Bespin Pit.

Select a map among all those in the game, use the NPC Spawner to make your own Star Wars Battles.

Choose your Force side, fight your selected ennemies with your desired teammates, and control them if you want...

Use the Camera menu to freeze NPC or Effects, take the best screenshots with the desired point of view.

Access to the cheats menu to change your saber color, select your Force Powers, weapons, inventory, or even bring up a drivable AT-ST...

Personalize your gameplay. Unlock all saber stances, select your movement speed, fight with your fists, choose your crosshair, be invicible, and more.

Feel the power of the Force and the Lightsaber through unlocked dismemberment and configurable pushing force.

Unlock all game settings options and push the game engine to the limite. Select your custom resolution, toggle curve details to the maximum, or listen to the game in 44kHz instead of 22kHz...

Interact with the menu in your language. Expanded Menu tries to be the most accessible by being translated into English, French, German, Spanish, Italian, Hungarian, Russian, Chinese, and compatible with the remaining ones.

Use the Expanded Menu configuration file to customize your game settings, like manual lightsaber blocking, or even the npc quick spawn key bind.

Find a lot of game elements in high quality. Like icons, fonts, and even loading screens. Also, the Mod fixes buttons that didn't work like the swaying view, the Alzoc III skybox, and other annoying bugs.

Expanded Menu work in singleplayer and multiplayer. Configure your network options, allow dismemberment, display details like FPS, time, lagometer, or even toggle the graphical options to the maximum with one button.

The Mod ensures compatibility with JK2MV by detecting it by itself, and adds the fields relating to the mod.

It behaves like a .pk3 archive as compatible as possible with all other mods, but it must be in the last alphabetical position. It should even work on all platforms PC, Mac, Linux.

Do not wait any longer to experience the Star Wars atmosphere with new menu music, new sounds, and much more...

And try a new approach to Jedi Outcast...

Some examples among many others : 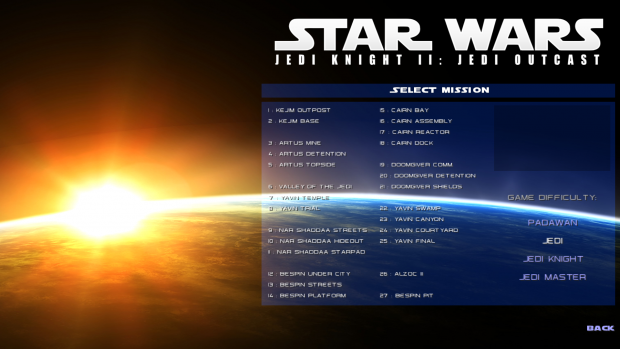 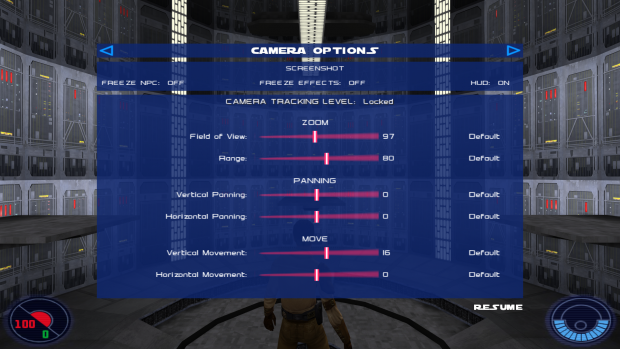 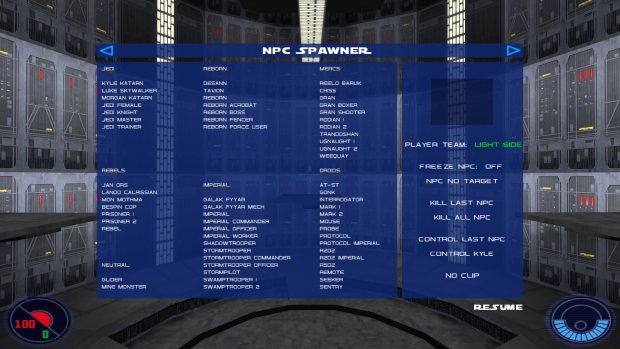 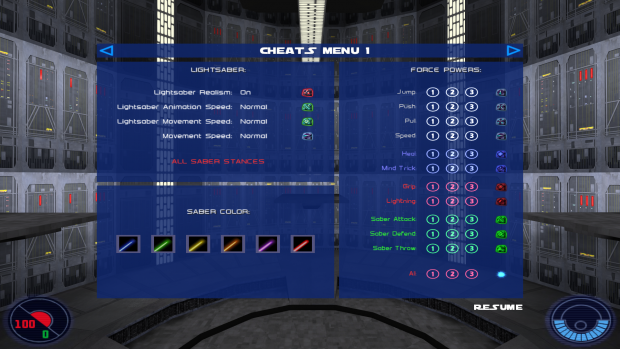 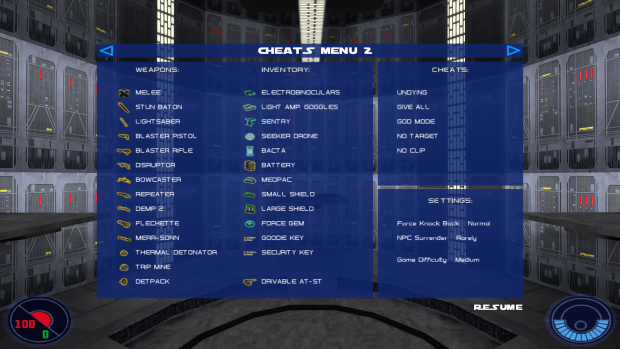 Lyorran, Incredible work on the latest version, the UI music menu was a total surprise, absolutely love it, the mod seems very well polished now and love the work have done to this mod and incredible game, thank you for your hard work. :)

How do you stop the lightsaber from killing people without swinging? I find it way too easy. I tried disabling “Lightsaber Realism” but that stops the game from doing excessive dismemberment and limits only to limbs and head

As you say, "Lightsaber Realism" increases lightsaber damage and allows for more dismemberment.

Deactivating it allows you to be close to the original gameplay, you will then have less dismemberment, but it remains activated and possible on a fatal hit.
(For the German version, use the quick button in the Cheat Menu 1 to allow dismemberment in a new level)

Be sure to activate the dismemberment option on "full body" and on "excessive" probability.

For some reason this is broken for me. Primary menu text is all garbled (though the descriptions are fine) and the inventory menu is unavailable (Unable to find menu ...). You can cycle to it via the cheats menu, which works - the menu items are readable, but the menu title is garbled again.

v1.04
I do have jk2mv in the directory, but I'm not sure if that should matter. Otherwise no mods.

Fixed in the last version of the Mod.

Hi, I just did a clean install of Jedi Outcast with no other mods but for some reason when I put the custom resolution of 1920 x 1080 it zooms in too much and I can't see anything.

When you select the resolution, do you apply it with the red button before you start setting up your game ?

is there a version of this for academy as well, I played outcast with this and it was great, wondering if there is an equivalent for academy

I might do a Jedi Academy version someday, but there are already some big Mods for Jedi Academy, which has similar things, like Movie Duels, KotF, etc.

I would like to complete everything I wanted to see in Jedi Outcast first, which I find did not receive enough this kind of Mod. :)

Lyorran, I checked out the simple HUD in the MP that you mentioned, definitely dig it, seeing in that in the SP, or a HUD similar that can show numbers to the force meter would be awesome for sure. :)

Unfortunately this is not possible in SP mode, without touching the source code. The cvar "cg_hudFiles" in SP mode doesn't work as in MP mode. :/

Maybe an OpenJO build will allow you to use this cvar in SP mode as you wish...

That makes alot of sense, no big deal, looking forward to the next update. :)