"Her Eyes" is a total convertion mod where the story takes you to the small town of Ringwoods.
You play as a young cop named Frank, who is send to investigate a recent escape of a patient from the local asylum, located not far away from town. You are told that you have to find this patient as soon as possible. Before...the medications she's been given wear out. Because as Frank will soon discover, there is something rather... "abnormal" about her and the overall circumstances of her escape are very bizzare.

"Her Eyes" is a more story-driven game.

If you are more into shooting huge hordes of aliens, zombies and various other monsters in a non-stop action-packed adventure, than this one is not for you :(

Thanks for voting and helping Her Eyes on it's quest to become the 2021 Mod of the Year. You are now in with a chance to score some free games from our #modlove collection. Help this mod secure more votes by embedding the widget (or link) we have included below on your favorite sites.

Mod is on hault. Not permanently!

Ok, it's been a long while. I realize I've been quite silent. While other modders put out updates on their progress weekly, I haven't been doing so, because I don't feel like notifying you guys for every little thing I do. When I've made some good progress, I'll make sure to share it with you all.

I was mostly finishing up my work on Her model. The character, this story revolves around. I'm not gonna show Her in her full glory just yet, but you can get an idea from the new mod's logo- 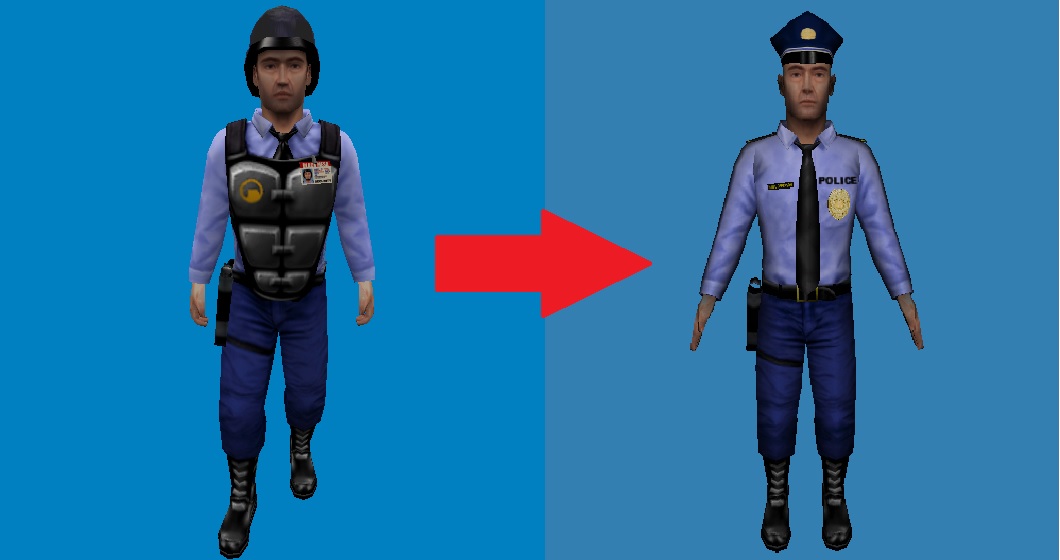 There will be other cops as well, which will need unique heads, but for now- gaze at this guy.

In terms of modeling that's pretty much it. It doesn't look like much, but the main character will have a bunch of models, as her appearance changes according to the story's needs, so I've been working equally on all her models along with that cop guy. And as you know Half-Life 1 lacks female npcs so I couldn't "borrow" the base for her from an exsisting model, like I did with the cop, so I made her pretty much from scratch. That takes time, or it does with me as I'm not exactly super experienced or anything.

That was in terms of character modeling. I reskinned a few of the weapons as well: 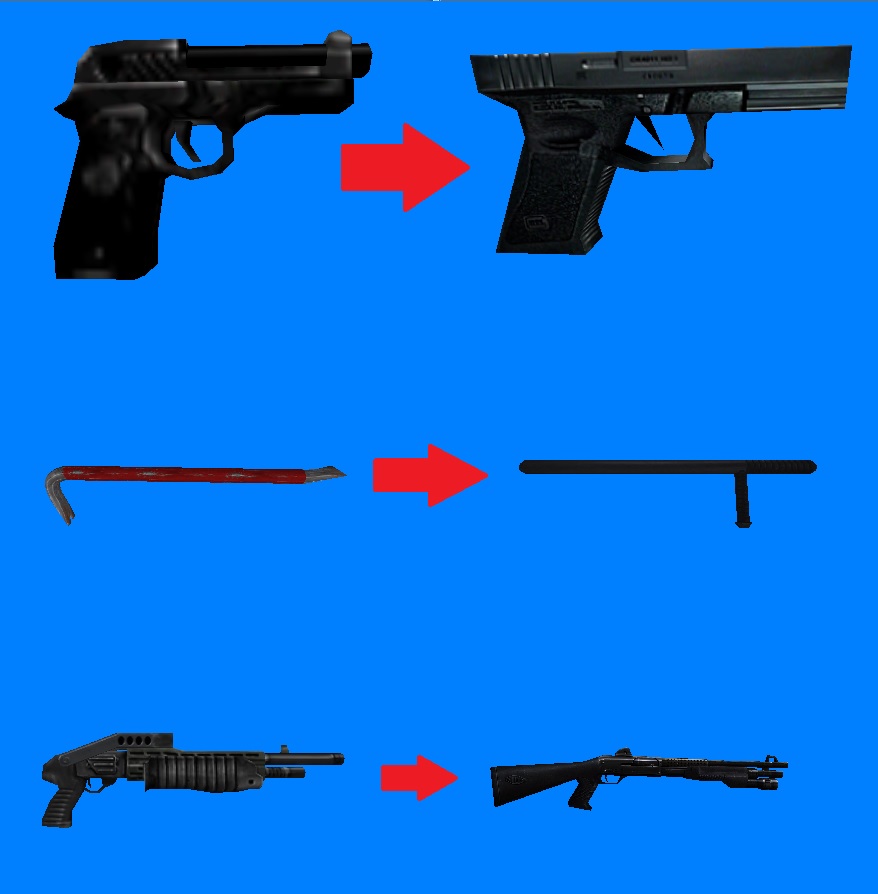 Wanted to make them like something a police officer could have.

One the mapping part-

Well... No actual levels have been made so far, BUT I've been making props for them. Street lights, vehicles, rubbish bins, you know- things that will be quite common in the levels. Better make those props now, instead of pausing every 5 secs for something that I'll need to put in my map (but don't have pre-made), once when I get to level creation. So that's that.

Listen, I'm a busy guy and I'm a one man developer team (It's my fault on that part- I like to work alone, sorry), so progress is gonna be really slow. Unfortunately I'm not a kid with a ton of free time. I have to work, bla bla- boring stuff. I get only a few hours on a PC a day, and I certainly don't spend all of it on this project. I will probably go crazy or something, if I did. Don't get me wrong! I like modding, but HL is an old game and as such the development process, of new content for it, could be very tedious at times.

"Ok, so work on the mod is slow, but you're getting there"- is probably what you're thinking right now.

Well... not anymore, unfortunately... How do I put this? My poor ol' PC's drawing its last breath. It's game over for this 6 year old Asus laptop computer :( Honestly, I don't know how it lasted this long. My previous machine lasted only 2 and a half years! Stupid Toshiba and their overprized crap!
It's not broken as to where I can't use it anymore, but the CPU's pretty much dead. A zombie is what my PC is, at this point. I can still run it, obviously, as I'm writting this article ON IT, but I cannot perform anything more complicated than writing TXT files, watching videos on Youtube and checking social media. Running Hammer Editor, Blender or any of the other modding tools, especially the compling ones, makes my laptop sound like a jet fighter taking off. Crashes are more and more common. So I'm afraid to even do something, cause it'll crash and all progress would be gone. My PC's too weak and old now, it can't handle those heavy programs running ;/

I don't think I have anything else to say, as of now.. Untill I get a new laptop, I'm discontinuing any further work on this project.

Her Eyes- Project has started

What is this? This is a total convertion mod for Half-Life. It is also my first attempt at something more than unconnected maps, models, ect. As a first...

Sorry if everyone is still waiting for this. I changed PCs last summer (2017), but I still haven't got around to continuing the mod. I have all the files, still so that's good. I just have so many interests (modding, 3D animation, drawing, playing video games, collecting things, etc.) that I always end up working on something for a while and then switching to something else. I still have a bunch of cs 1.6 maps in development, because of this. I rarely actually publish anything and most of it remains in WIP form :( . But don't worry, I always end up going back to a WIP I've started. It's like a loop pretty much.

I guess all this wall of text was to tell you that I will return to the mod eventually. Keep waiting if you're the patient kind or ditch me, cause that's really what I deserve for making you wait.

I hope you continue this mod, good luck to you.

It's totally understandable, you should do what you wanna do :)

But do you have a backup?

Keep at it! The mod look amazing!

Do you still work on this project?

Yes, but unfortunately I don't get much time to put into it. Time has always been a problem for me and that's why many of my ideas have gone down the drain in the past years. Since I don't want that happening to this project I registered it here. Now I feel a have a promise to keep to those who became followers, so I'm not abandoning it!

But yeah, don't hope for a demo any time soon. I was a bit too optimistic on that part in my first article.

Single Player
Tags
Embed Buttons
Link to Her Eyes by selecting a button and using the embed code provided more...