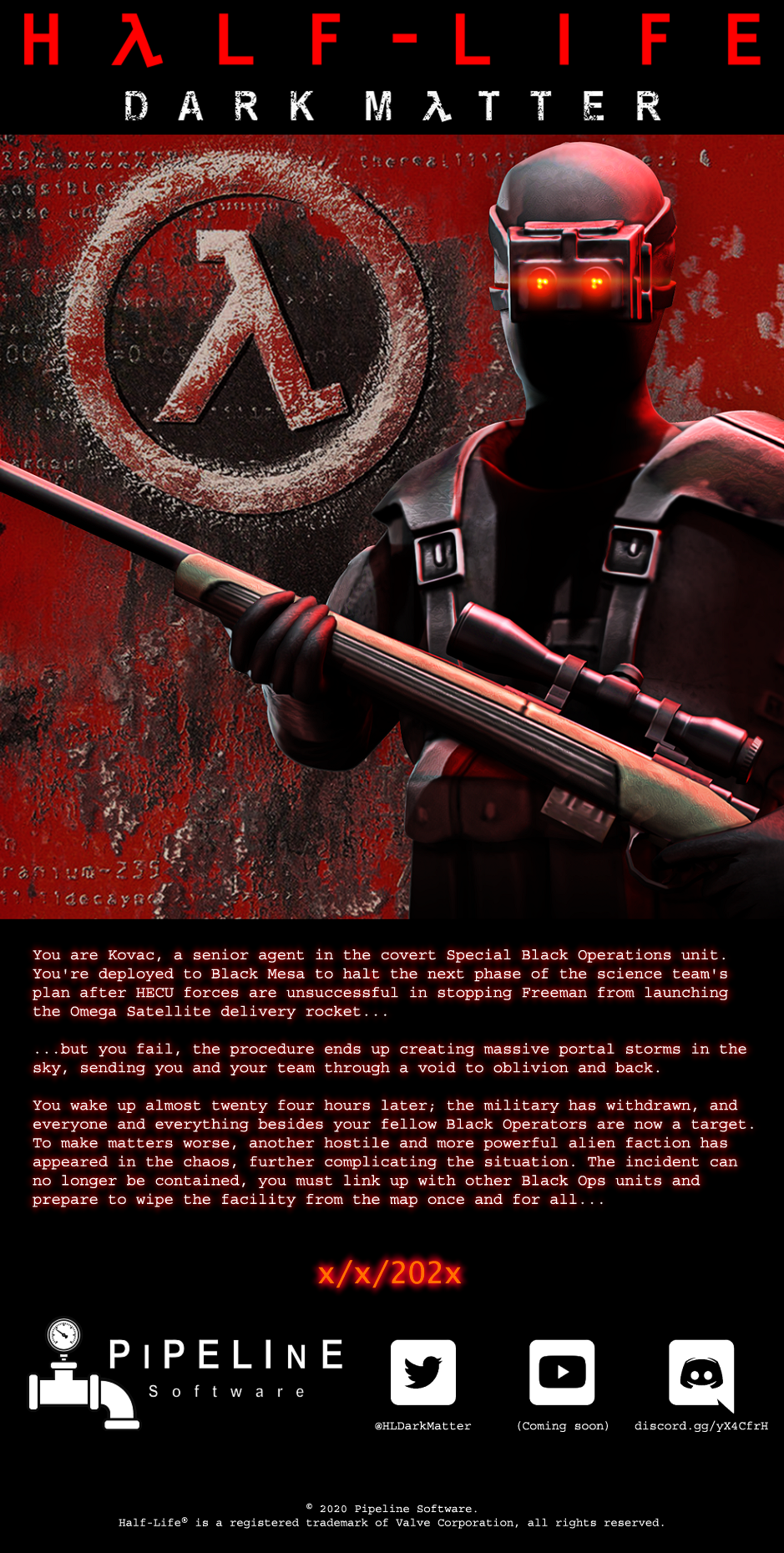 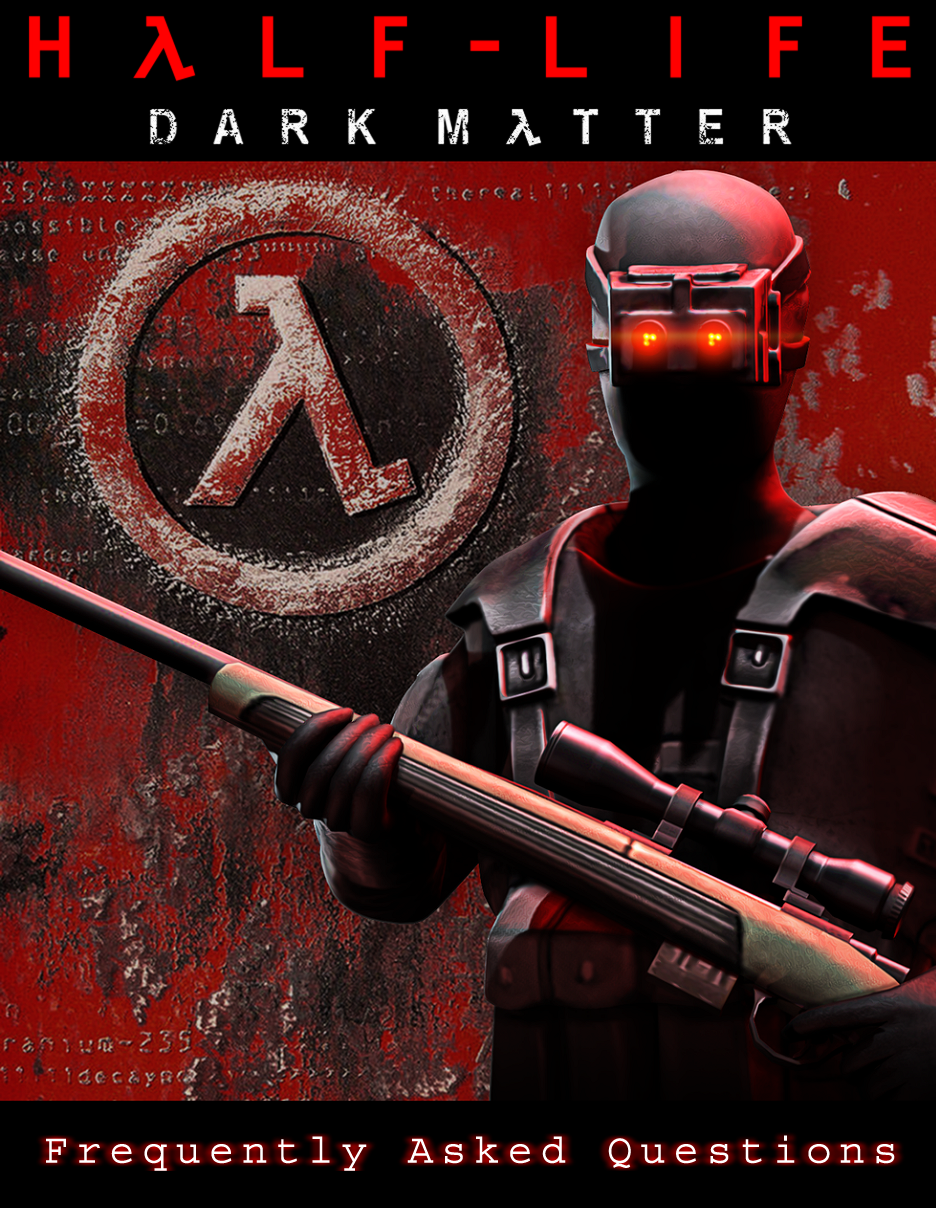 What is Dark Matter?

Dark Matter is designed to be an unofficial fourth and final Half-Life 1 expansion set in the Black Mesa Research facility during the resonance cascade incident. This time at last you play as one of the deadly Black Operator units named Kovac.

Not much is known about him other than he was born to parents from somewhere in Eastern Europe, is around 44 years old and is a former Navy Seal.

What is Dark Matter's plot synopsis?

When Gordon Freeman successfully launches the Omega Satellite delivery rocket during "On A Rail", Kovac is deployed to Black Mesa as part of a team tasked with overseeing the HECU cleanup operation. With the science team able to potentially cause further damage, containment of the situation will become much more difficult to accomplish. If the military cannot handle the cover up effectively, Black Ops should be there to assist and even take over if necessary.

Kovac is deployed as part of a team who are tasked with infiltrating the Gamma Labs following reports that the science team are initiating the next phase of their plan. You and your team must stop whatever is happening and detain a scientist named Dr. Keller who is wanted by the authorities due to his valuable knowledge about Black Mesa's technology and projects. The rest of the science team is expendable, including the two armed HEV suit wearing scientists that have been causing a headache for the military in addition to Freeman...

Ultimately you fail to reach the labs in time, and the fallout from the procedure causes massive portal storms in the sky near your craft, before it is sucked into a vortex with you in it.

You awaken almost an entire day later following the military withdrawal, Soldiers trapped in the facility have made you their prisoner, they're angry that your operatives are terminating their comrades. You learn that orders have changed and everyone and everything is a target, with the situation so out of control that the only way to proceed now is to wipe the facility from the map once and for all...

In what period during the Black Mesa incident does Dark Matter take place?

Kovac's mission begins at the very end of day one sometime during "Apprehension", but the main game itself starts towards the end of day two around the time of "Pitworm's Nest". It then lasts beyond the events of Opposing Force, with the final taking place around the late morning of day three when the nuclear warhead destroys the facility.

How long is Dark Matter?

The campaign is spread across 12 chapters and will be around the same length as Opposing Force.

Are there new enemies?

Yes, Opposing Force enemies as well as new and variations of existing ones (ie zombies).

Are there new characters?

Yes, your fellow Black Operators plus at least one new member of the science team.

Are there new weapons?

Yes, again Opposing Force ones and new as well.

Is there any new music?

Yes, a complete new soundtrack by our composer Speedy.

Is there a new training area?

Yes, players can take the training course in the Special Operations Unit facility if they wish to!

We have an all new code base featuring Opposing Force entities and full spirit 1.2 implementation, as well as various new custom features like a keycard system, real time radio communications, and a new vision mode to replace the flashlight/NV. We'll showcase examples of this at various points throughout development!

Do fellow Black ops fight with you?

Yes, both male and female black operators will assist you during some parts of the game, fighting enemies and sometimes helping you bypass areas that are otherwise off limits without them.

Will there be stealth?

There will be limited stealth featured in some parts of the game, but for the most part the gameplay is still standard HL; this isn't Splinter Cell! ;)

What kind of new areas can we expect to see?

As previously mentioned, the Central Transit Hub makes an appearance finally, so there's more post-disaster Black Mesa Transit System to explore. There's the Main Facility Entrance, a new cliffside area and a new section of the underground Materials Transport network. You'll see the regular kind of environments to expect as well as some newish original designs to freshen things up, otherwise everything is standard BMRF in the style of Gearbox/Valve!

Will you visit exisiting Black Mesa locations from HL and the existing expansions?

Yes, you'll see familiar areas from Half-Life, Opposing Force, Blue Shift and Decay. Some of these are brief fun crossovers, others are more in depth such as the Lambda Complex.

Will we see Xen?

Gordon is in Xen, and Barney has already escaped Black Mesa during Dark Matter, but it's possible you could see the others...

Will we visit the Race X homeworld?

Do The Combine appear?

Does Mitchell, Adam or any of the other characters from "Hunt Down The Freeman" make an appearance?

Does the game make use of enhanced visuals like detail textures, enhanced rendering etc ?

Why aren't you making this on the Source engine/Black Mesa?

Will it work on my non-Steam (WON) version of Half-Life?

Right now it is fully compatible with both WON and Steam, but whether it will stay that way I can't say for certain...

Will it work on Half-Life: Source?

No, you need the original Half-Life game, it won't work on Source.

Will it work on Xash3D?

Since pretty much every Half-Life mod functions with Xash, it should work.

Will it be playable on Android?

Will it be compatible with VR?

Can I still use the original LD (low definition) models in the game?

We're using HD models predominantly, with modifications here and there (such as old textures on the HD agrunt, new heads on the hgrunt etc), and some PS2 models with changes for things that don't have a HD version. Of course there will be entirely new models as well, and a lot of the models, whether they are new or old, will have various new and modified animation sets. So there is already a lot of work to be done there, without adding to the tasks to set up all the old models to work the same.

We recognise that the HD pack is not everyone's favourite, so we're trying to improve the quality and fix some of the less appealing aspects of it. We don't rule out producing some kind of LD pack after release, but failing that it is more than likely that the community will take it upon themselves to make one anyway, that's usually the way!

Will there be any multiplayer?

Dark Matter is being built with single-player in mind first and foremost, but it's possible we could add multiplayer in the future...

Will there be a demo?

Perhaps in the future.

When will the expansion be released?

There is no definitive release date yet, for now it is simply 'x/x/202x', so expect it sometime in the next decade!

A rather large bump in the road...

I'd rather not post such a negative article, but my health has taken a serious hit in recent times, and you should all be aware what this means...

Hello everyone, I am pleased to finally bring you a brand new update for Dark Matter! This is quite an extensive write up, and hopefully you will find...

Welcome to the official launch for "Half-Life: Dark Matter", in this post I will reveal various details about the project!

Finally a expansion from the Black Ops side to fully complete the Half Life Saga! I always wish there would be one and even though I played a old mod called Black Ops before. That was alright but didn't felt like it stick to the Black Mesa event. But this, this is going to be the best mod ever even though there's a lot of other great mods. This is different because it's not just a big epic mod but also completes the Half Life saga from the Black Ops side. I can't wait to see how this game evolves over the months and years.

I like the idea that the events of Dark Matter takes place even later than Shephard's story, a perfect fit for the last expansion. This can allow Race X to even shine more as they slowly take even more and more of the facility.
And now that you mention it, it makes perfect sense that there would be more than One Gene worm since it's kinda like a huge bioweapon rather than some single grand leader.

Kovac don't even have to fight a Gene worm like Shepherd since he's blowing the whole thing sky-high but he might have to fight other important Race X commanders or figures.

In fact the Race X slowly corrupting and conquering the large Black Mesa facility could be exactly why the Black Ops wanted/must blow up Black Mesa in the first place. The Xen aliens aren't the reason, it's Race X that's the problem. The Black Ops knows if they don't nuke this place completely than the Race X terraforming will spread beyond the facility. Having Kovac see more and more of the Race X biomass infecting more and more of the facility as he gets further into his mission would be a good sign as to why this mission is so important.

Having 3 way battles between Race X and Xenian forces with the Xenian losing would also be another good way to show how Race X is starting to dominate the war on Black Mesa. Would be how the Xen aliens start overwhelming the HECU later on but now the Xen forces are falling prey to a even greater alien race.

And also finally nice to see Black Ops the most powerful human faction as allies! Which is fair since Kovac is going to deal with the greatest alien threat ever! Not to mention all the other threats that'll also get in his way like Xenian remnants, HECU leftovers, security/scientist, and those scary Gonomes since it's so late into the event.

Some people did say on half life story talk that one nuke might not even be enough to wipe out the entire Black Mesa. I'm not sure how powerful a nuke is but if that is true then that could mean Kovac might even try to set up a different nuke in a different location rather than the one that G man set off in Opposing force.

Overall really looking forward to this expansion and good luck!

I cant wait to see those new HD human grunts with many different variations similar to Op4 human grunts.

When this is out, I'm sure someone is going to remake it like black mesa.

A small update is here for MOTY, with just one day to go till the first round of voting ends... better late than never!

I hope this goes well. These days you don't see many like you used to. But seeing as this is an unofficial expansion pack and places you into a new part of HALF-LIFE, I am very anticipated for this mod.

Hope you're recovering well, the surgery was the tail end of last month wasn't it?

A month on and things are a lot better now, thanks everyone! 🙂