Eras of the Mercenaries


SoD will be among the first releases, focusing on the Rise of the Empire Era.

As a Rebel leader, you will be tasked with uniting the insurrectionist worlds and diverse militaries like that of Naboo, with their fleets of N1 and N1-E Starfighters, Mon Calamari, with their emergency refitted Star Cruisers, and Corellia, under the control of Kota's Militia and the CorSec's aging Battleships. All the while being hindered by extremist rebels such as Gizor Delso's droid armies of Mustafar and territorial Black Sun warlords.

As the Empire's leader your mission will be to develop your technology into a unified Imperial military. Develop stealth fleets with the resources of Aetan II, Highly trained commandos in Anaxes, and powerful superweapons at The Maw. All the while quelling insurrections in planets like Mandalore, which responded to the creation of the Empire with a massive military buildup, Kamino, where Cloners have created their own private army of Anti-Clones, and Jabiim, the staging point for a large Hutt fleet.


As the name implies, mercenaries will be a major part of this mod. The player will have to decide on long term and short term goals, as shipyards and defensive structures become available to them they will also unlock special units, heroes, and of course, mercenaries which can be used by both sides.

The Tech Trees of every faction have been completely revamped in order to match the units corresponding eras/factions. The Eras will include (in future releases):

Hi all, welcome to another installment of "Is this the last we'll hear from Mobius?" (pt.3). I'd like to welcome you all back with a fan favorite. Today we will focus on the work thats being done in the mecca of Mercenary planets: Mandalore.

More importantly, we will be focusing on why you should focus on getting there before your enemy.

That is, if you can get past the Mandalorians. 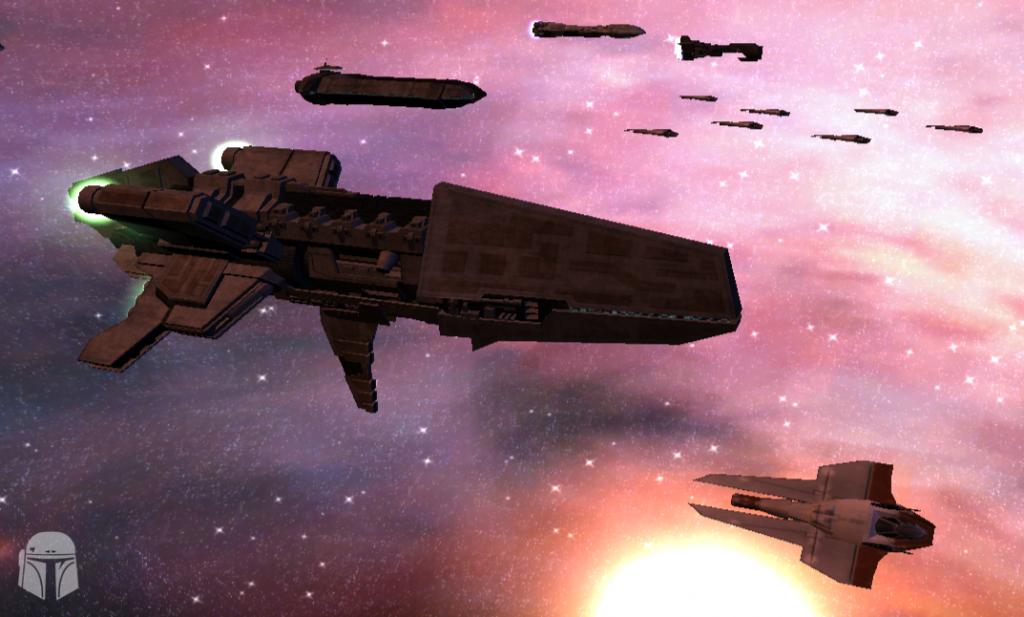 Available only at MandalMotors, the Kandosii is an ancient design that has been constantly retrofitted over the past millenia. Although it does not compare to modern hull designs, the Kandosii carries the advantage of a largely missile based armament, boasting 4 Main Concussion Missile batteries, as well as 2 Laser Cannon Batteries and 2 Turbolaser Batteries. 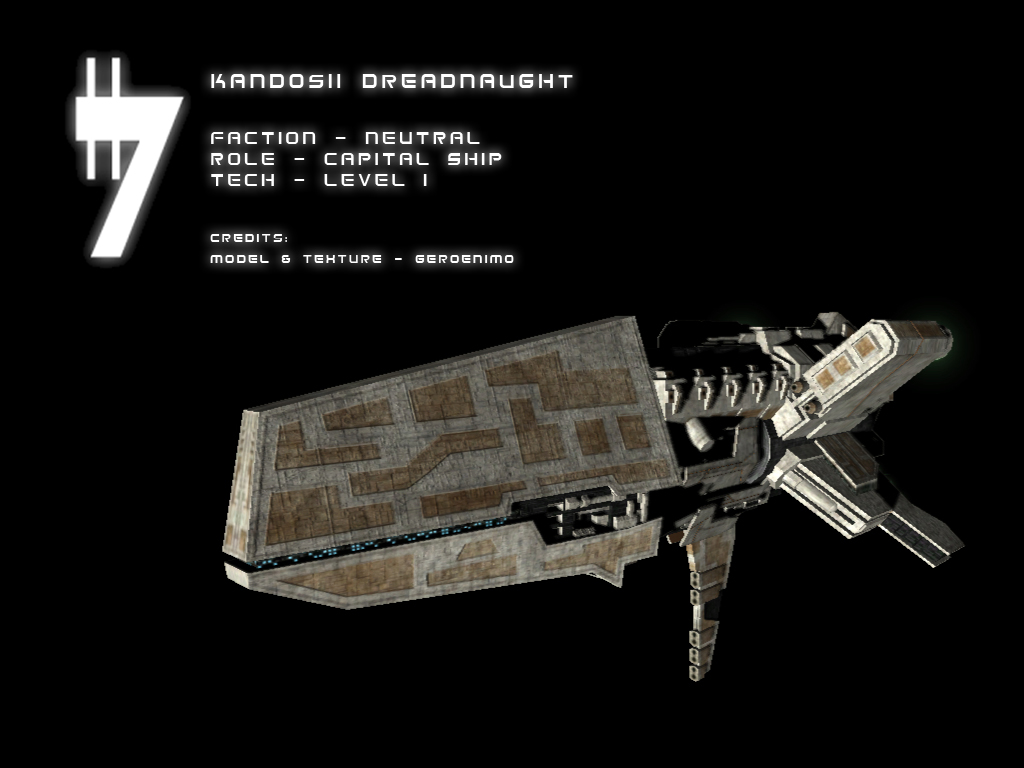 A relatively new design, the Aran (meaning Guard) is well suited for its name. Equipped with missile weaponry and state of the art flak missiles, they are powerful perimeter escorts and a must-have in any anti-fighter situation. 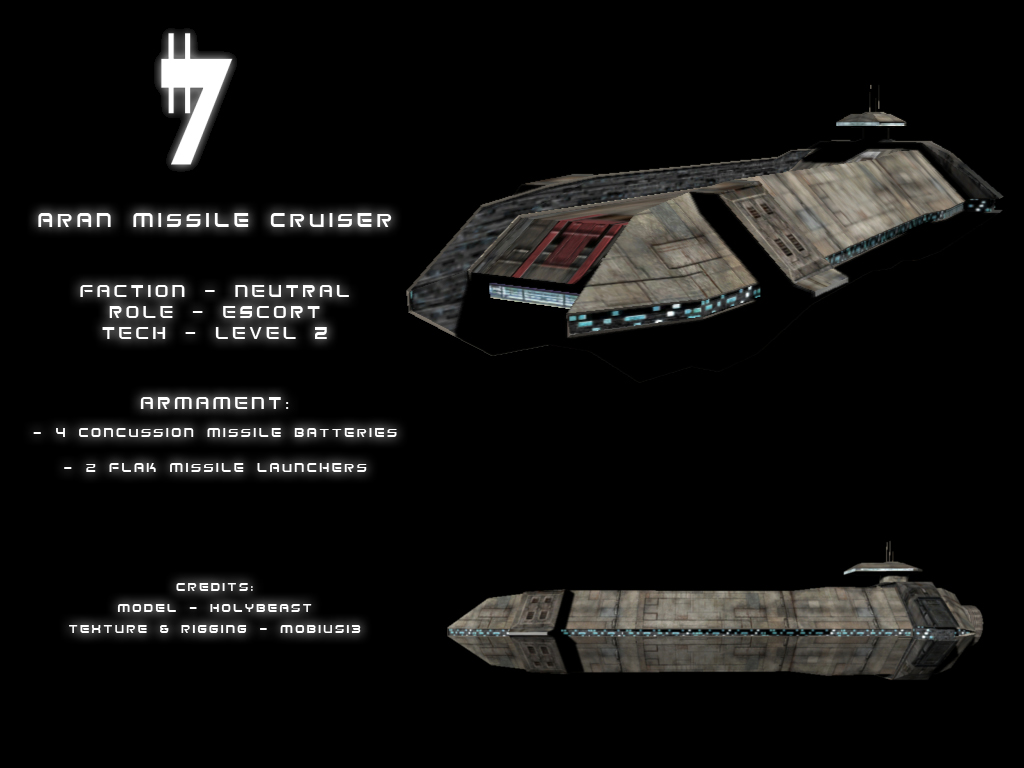 An unimpressive fighter by all means, the Scyk's standalone trait is its cheap availability and sheer numbers. Though it carries a hyperdrive and shielding, it is about an equal match to contemporary fighters like the TIE Fighter and hard-pressed against Z-95 Headhunters. 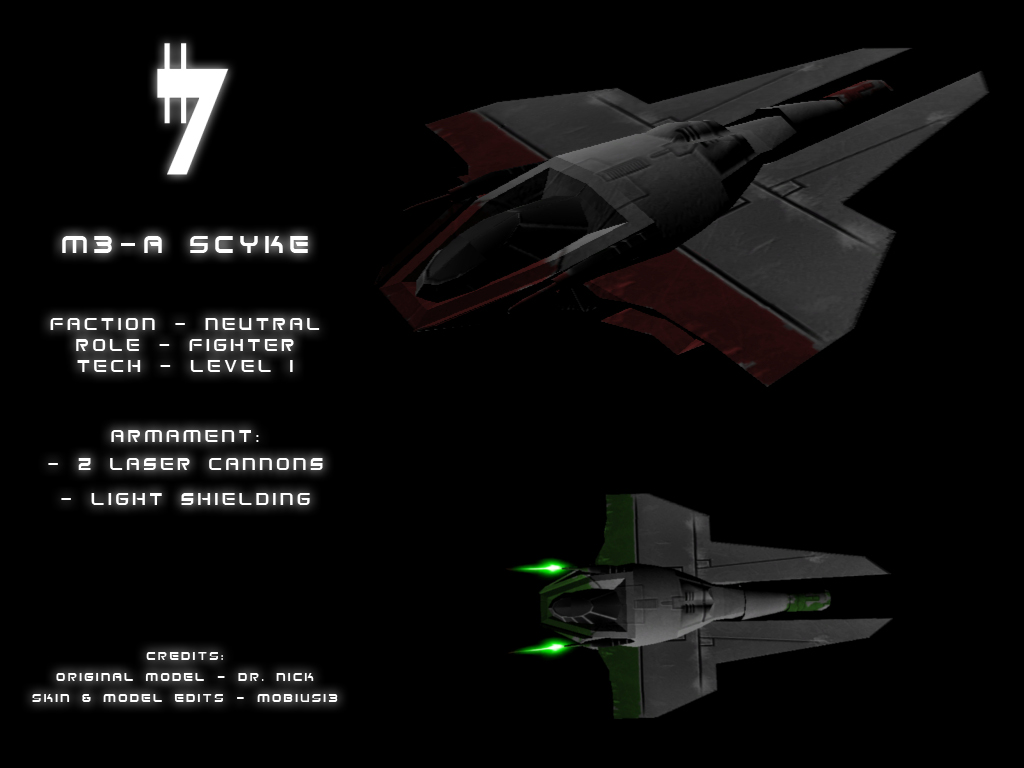 The most feared troops in the Galaxy, Mandalorians bring a lifetime of experience in a military society to the table. Heavily armored and armed, Mandos are superior to even the elite Stormtrooper Corps. The three basic (read: basic, not all) Mandalorian infantry available are Shotgunners, Grenadiers, & Riflemen. 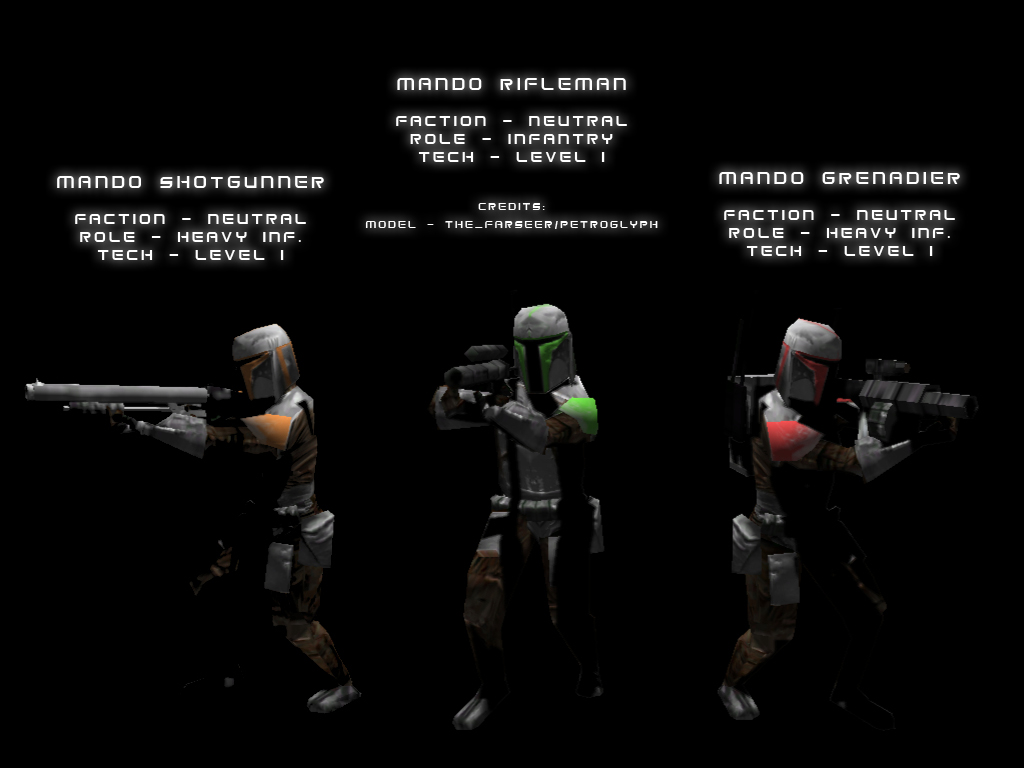 Mandal Hypernautics, a more ground focused Mandalorian company, also sells ground vehicles, such as the Kov'nyn Assault Tank and the Bev Scout Speeder. Both of which are retrofits of older models, but have proved capable in battle, continually proving the Mandalorian rule of "If it ain't shuk'la don't fix it." 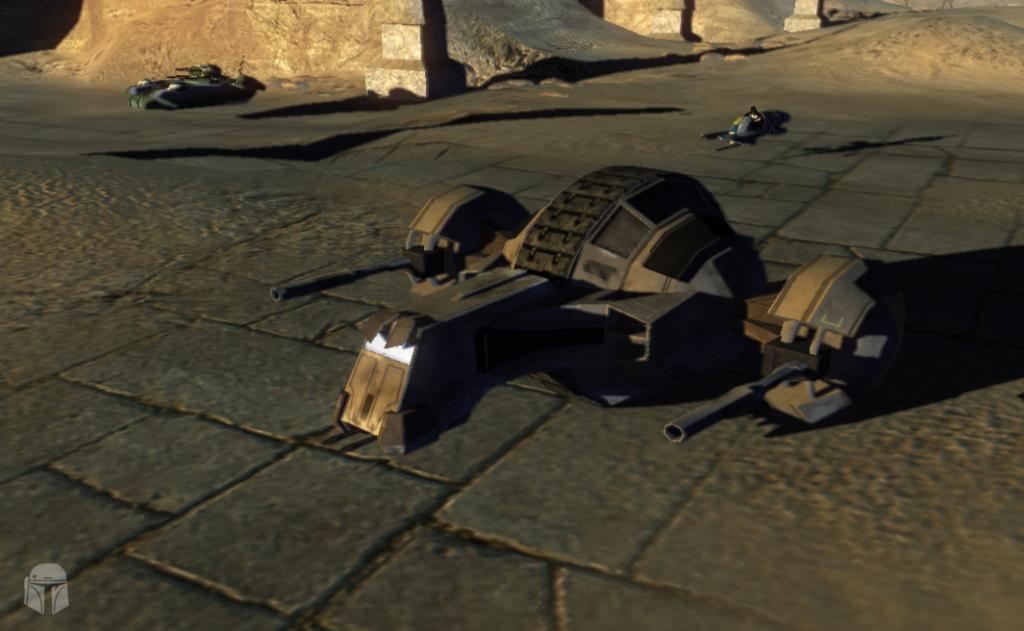 Hope that's enough to tickle your fancy. Let me know what you think in the comments!

Hey guys! It's been a while. I'm wondering if there's any interest in this mod still.

First in the series of updates focuses on what will be the first release of the mod.

Question to the Community.

If possible I would like to know the opinions of the mod's watchers on something.

As you all know, making a mod isn't easy, especially working alone.

Random Models for your pleasure. Code not included in many of these.

A shame this is dead. Would like to know if you post anything you have as open source for modders.

looks good so far now I don't know if you answerd this already but is there a general idea on when a demo/beta release day will be? also im trackin :)

It's great. There will be more units of modern design?
We look forward to continuing :)

Of course! I'm starting simple and sticking to existing ones at the moment. The first release of the mod will only feature the era portrayed in The Force Unleashed and right before the happenings of A New Hope, so you won't be seeing much Legacy stuff as of now, but alot of interesting new stuff hopefully.

so do you have an idea when you can get the first release out? no rush I just want to know I probably have like 15 mods installed right now I love trying them plz get back to me and good luck;)

Lost models?
Sad. You've had a lot of interesting models, it is a pity you did not publish it.
Your mod was interesting to me, but to wait for it a few years ...

I'm sorry for the wait, life punches you in the gut repeatedly and sometimes you don't have the time to spend hours a day pouring over coding, texturing, rigging, animating, and modelling by yourself, and sadly i don't get paid for this either, so it more of a hobby, and will remain so, unless someone feels the need to donate generously :P

As for models, not all was lost, I had the minimod saved in my Dropbox. I quit modding last year since i didn't have time, and restored my operating system to factory. Now I have some spare time and am doing some basic coding, felt like checking in and seeing if there's still anyone playing this game, and judging by all the other mods right now, I think so. Thanks for stopping by!

Well, we fans are always here, to be qualitative modifications, we'll play them :)
Welcome back!!!

Hope u can continue ur mod and work in ur spare time, I am really looking forward to ur whole ETM...We can wait for years for a good, qualified and fantastic mod...Keep it up :)

Single Player
Tags
Embed Buttons
Link to Eras of the Mercenaries by selecting a button and using the embed code provided more...