Demosfen - the largest project on the Call of Chernobyl platform. It is based on the new x64 version of the OpenXRay engine, thanks to which the game has advanced improvements in terms of speed, which allows you to put a large number of graphic bells and whistles. You will find many new locations, several new quest chains, new models of characters and mutants, a full-fledged A-Life, new features, such as flying a helicopter and customizing weapons, and also, only here you will find open 3D sights. For the first time in the history of Call of Chernobyl - Bar "100 Roentgen" has been expanded, now it is the real capital of the Zone. To improve the character creation process and the parameters of the new game, the add-on "TRX: Fresh Start" was added. Constant work on the improvement of various aspects of the game, the introduction of new and unique content, the addition of new features and features - all this shows that the project Demosfen keeps up with the times.

Thanks for voting and helping S.T.A.L.K.E.R. [Demosfen] on it's quest to become the 2022 Mod of the Year. You are now in with a chance to score some free games from our #modlove collection. Help this mod secure more votes by embedding the widget (or link) we have included below on your favorite sites.

ZoneExpanded - Road To The North

Noises of the Zone

Friends, we finally released the full-blown update 1.05 for our modification!

Update 1.05 has a lot of innovations, I will tell you about the most basic ... 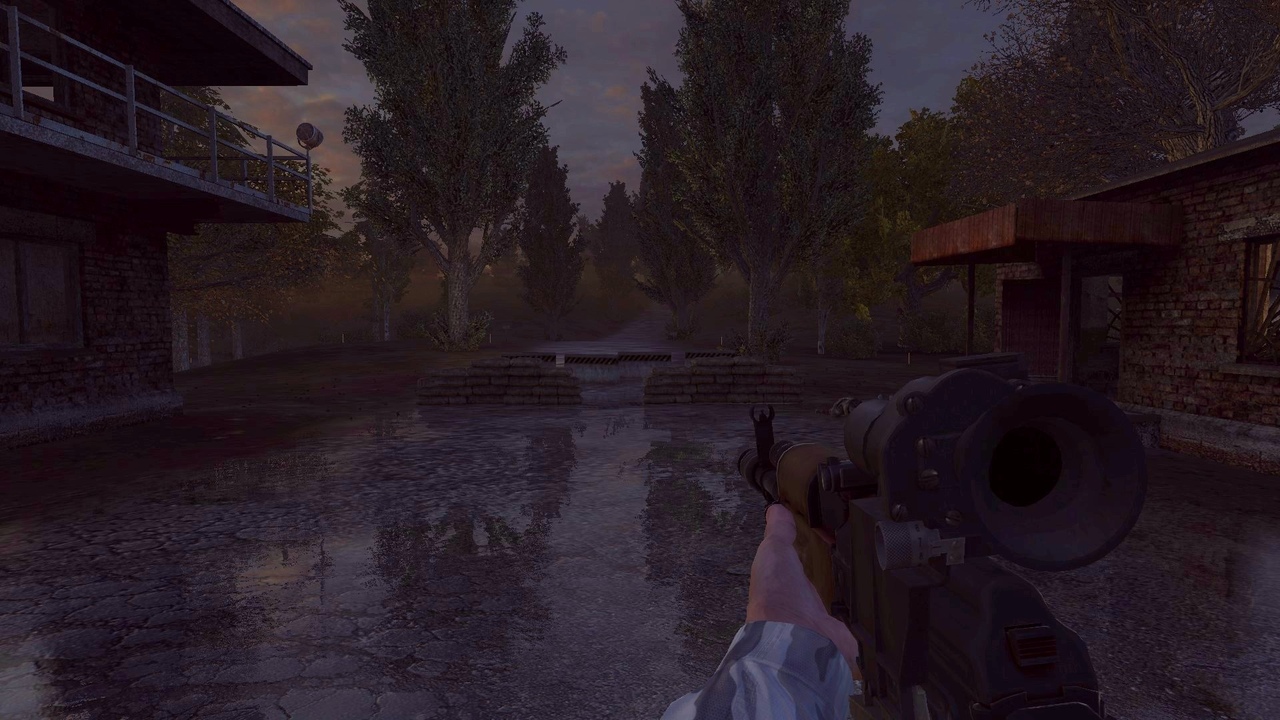 New quests, a new location and a new grouping 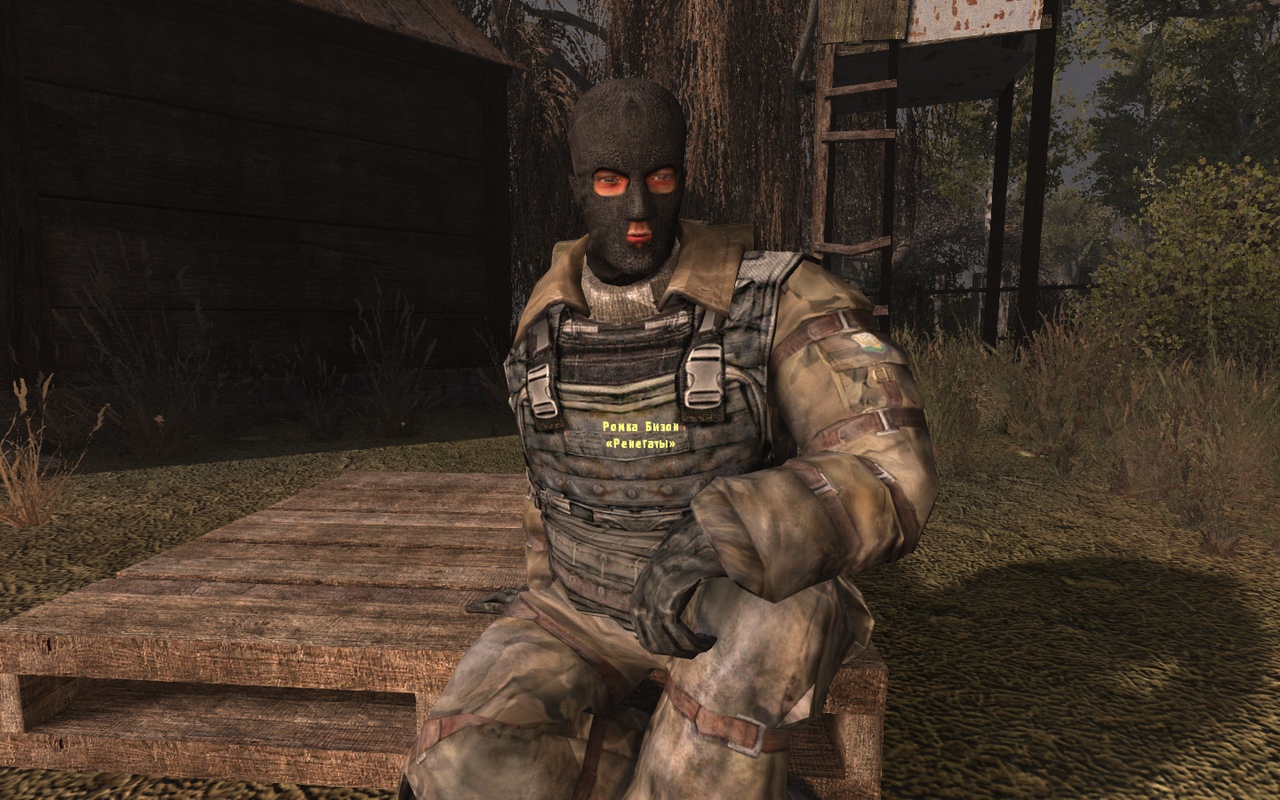 In the new version of our mod, you will visit the new location "East Landfill" and get acquainted with the new group "Renegades" that have a unique appearance, during this acquaintance you will be asked to complete one very interesting task, where you will encounter mythical bloodsuckers, this task it’s very difficult and I recommend you get a flamethrower because we also changed it significantly and now it sets fire to not only enemies, but everything else ...
As a reward for this new quest you will get something unique ... 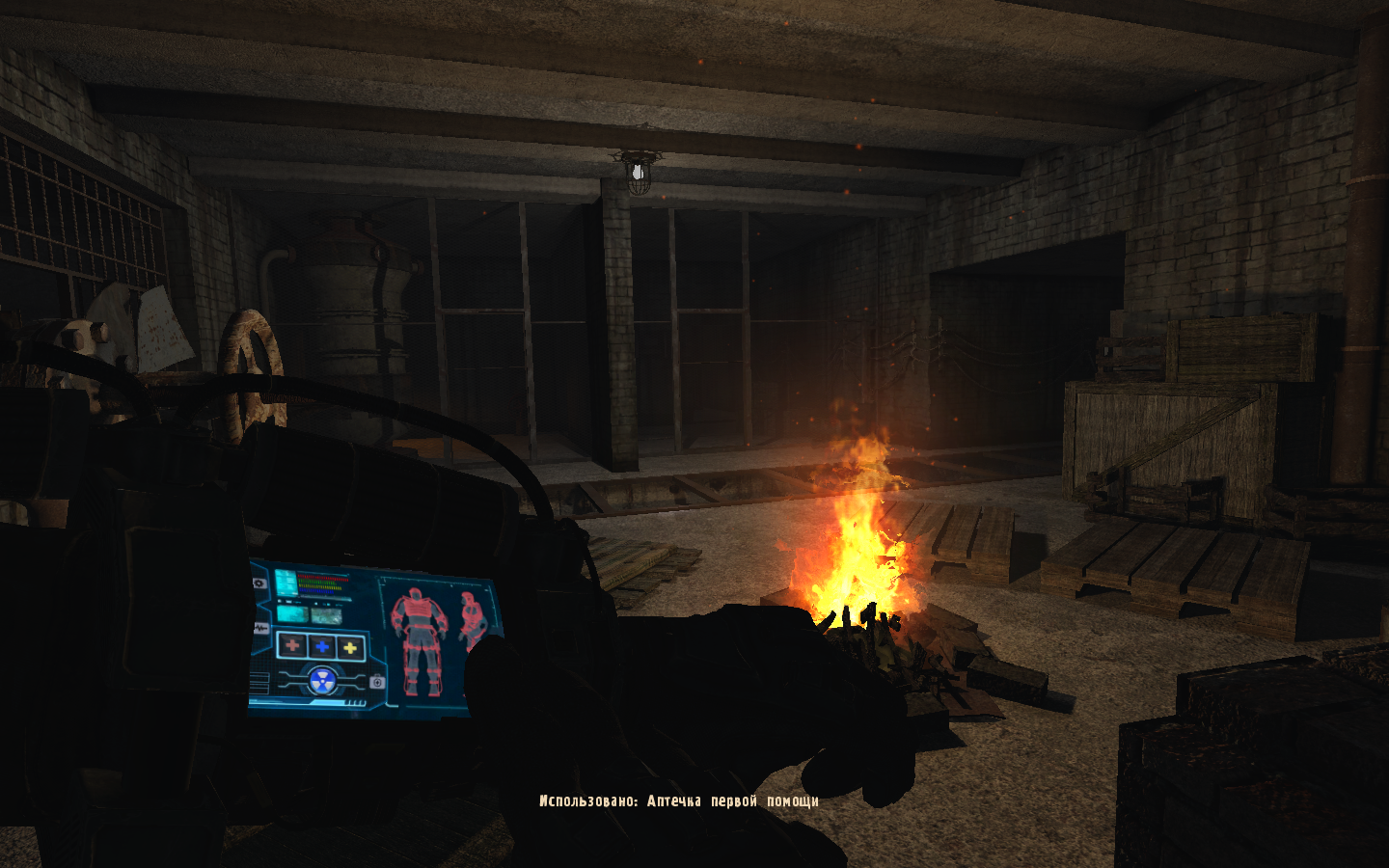 We added animations from the Ganslinger mod, now the exoskeleton looks really cool, we also added the possibility of theft from the NPC, for this you need to enable this feature in the "Option" - "Game" tab. We also added cool reflections on the water and the appearance of puddles after rain. 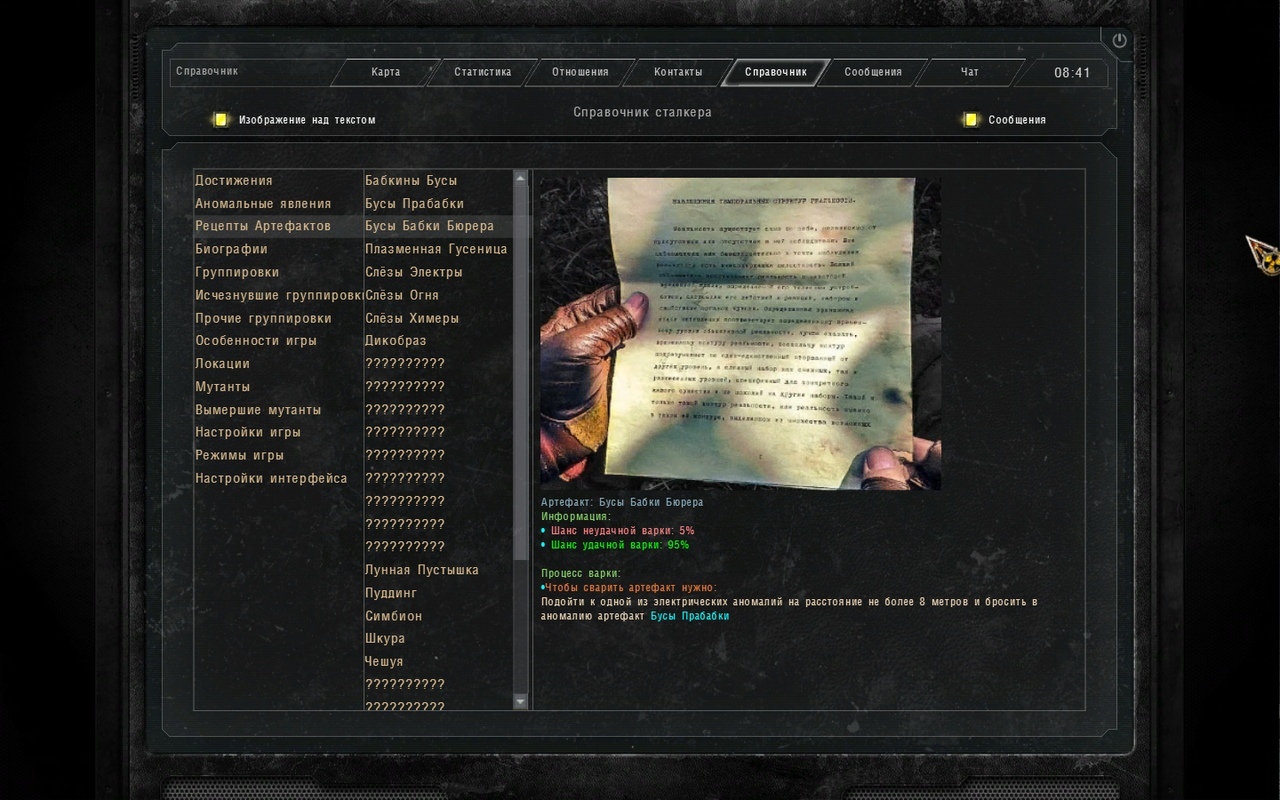 I think many of you play AMK mods and have met artifact cooking there, now it is also in our mod. For those who do not know what this is explaining: you travel around the Zone and find various flash drives with recipes, after you study from and you have the opportunity to modify the artifact. The modified artifact has already other characteristics. Subsequently, these modified artifacts can be exchanged for equipment from Ecologists ... 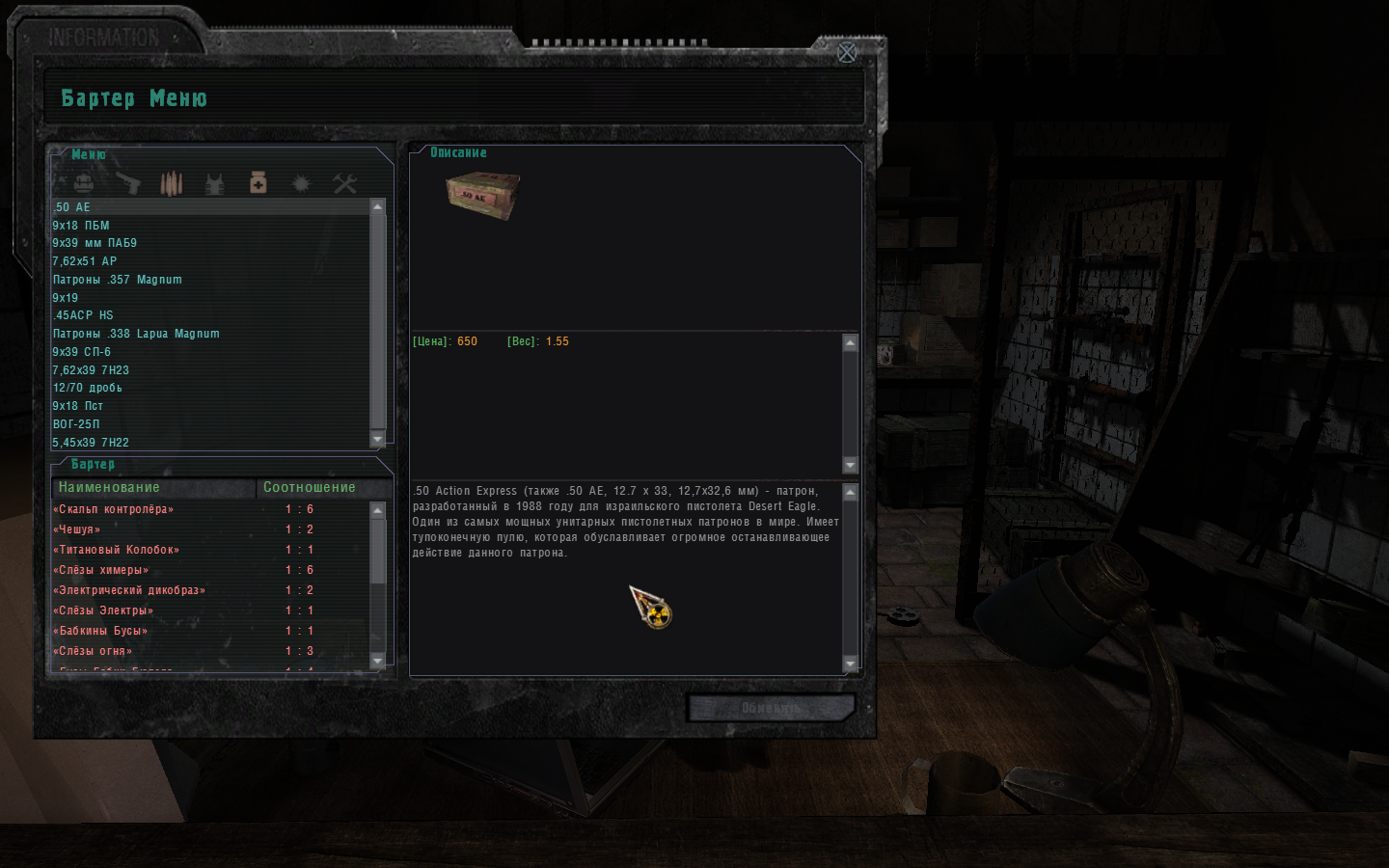 You can exchange modified and regular artifacts for equipment you need from various merchants. For Barter, we made a GUI interface, I think many will like it. 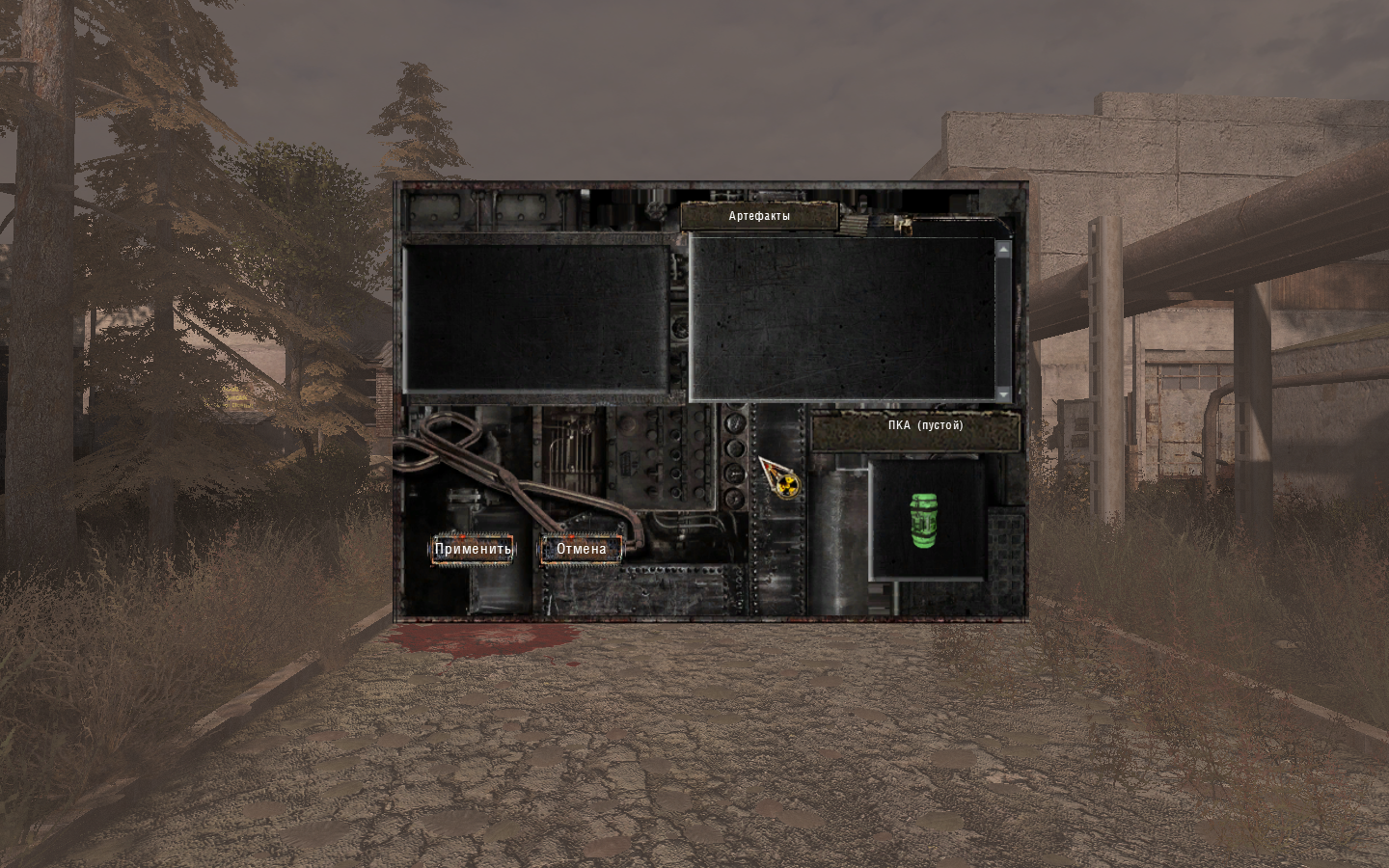 The system of containers for artifacts, taken from DA, which in turn moved from Misery, there are containers that completely extinguish the radiation of the artifact, and there are those that partially extinguish, they can be hung on a belt, and the artifact in such a container will work with positive properties. Simple and cheap containers are not rare, they will come across both stalkers and merchants. But containers are more powerful and more expensive - they will be rare, and the best ones are only in barter for artifacts.

Update 1.0.5 COMPLETE REPAC. Do not try to install it on an older version or other stalker games, just unzip it into an empty folder and play.

3. Run the assembly installation file - "Demosfen[dev.1.05] .exe"
4. Follow the instructions of the installer, install all the software that you are offered
5. Wait for the installation to complete.

7.Launch it and select "Language"

8. Launch the games and enjoy

The function “switch_distance” was added in the options. By default, the value is set to 1000, if you have a low FPS on the location, then you decrease this value, but if you see frequent friezes on the location, you increase this value on the contrary, everything is individual, but 1000 is the most optimal rate. Also, weather from the Anomaly Assembly was added to our assembly. The assembly took a huge step forward and reached a whole new level of modding, for which many thanks to my team and also to all the people who help in the development of the project. Also in the downloaded archive there is a file "Changelog_" in which we indicate other moderators whose work we sometimes use in our project. Do not believe the deceivers who shout that we take other people's work and do not specify the authors! They are lying, in the file "Changelog_" we all indicate!

We worked a little on the location and now it looks like you see some objects were added, something like a nuclear waste disposal, just now we are actively...

Demonstration of a new location from the SDK, I will soon show you screenshots from the game.

The release of the most long-awaited modification where there are many new locations, weapons with 3D sights, tactical body kits, as well as completely...

Upgrade to English localization. Scocou, Zone3r and Carlkuwait translations have been merged, tested, and revised for improvement. If you plan on completing...

Part 3/3 of STALKER Demosfen 1.05 - for links to the other 2 parts, read the detailed description. This does not require any previous versions of STALKER...

Part 2/3 of STALKER Demosfen 1.05 - for links to the other 2 parts, read the detailed description. This does not require any previous versions of STALKER...

Part 1/3 of STALKER Demosfen 1.05 - for links to the other 2 parts, read the detailed description. This does not require any previous versions of STALKER...

This patch must be installed on version 1.03 in the mod folder!

Demosfen , any new news? Many people here would like to know.

Hello, now I am improving my skills in 3d modeling, because the Supreme Modmaker Demosthenes likes to develop, unlike other modmakers)

What an ALFA move.

is this mod supports dx8 render ?? or should i say is this mod works for a potato pc ??

saw this got updated, click and of course, nothing. clickbait moment thanks mod db

A new facial photo was posted.

We need to be patient on this one. It is a large world that has to be designed and updated. Seriously, what was shared before was damn good. It did have its flaws. I'm sure this will be even better.

is a complete and viable english translation available for this mod?

I would hope either scocou, zone3r or carlkuwait will come back and do the translations for us all, on the new release. I really enjoyed this mod and can't wait to try out the new 'slo-mo' feature.

Wait, Carl left? I thought he was just very busy. Like five translation projects at one time or something

I don't know if he left. Just hoping he will be around to do the translation

you can see many of the bad review are pure hater. to them I'm telling if you think this author stole asset, report it to moddb right? why come to review raid this guy. now about the work, its one of the most promising mod around, waiting for a translation for 1.5 but really this modder did bring a bunch of features that other modder didn't bring, or cutted of their mods (like 3d scope) because they didn't liked it, without (atleast) giving other modder their file for them to try enhance/fix it…

Echo of the past world S.T.A.L.K.E.R.: Call of Pripyat