Caleb will need to muster all his strength to take down the mighty Tchernobog, who has managed to free himself from the grip of death.

Death Wish is a campaign for Blood with over 30 new levels, cut scenes, and more. All levels have been adapted so that Co-op play is not only possible, but enhanced with a helpful checkpoint system. The campaign includes several secret levels which all connect back to their episodes through special transitional missions.

The entire mod was developed by a single mapper, "Bloatoid", who has been editing with the Build engine for many years. The original Death Wish was created between January 2010 and October 2011. Updates have been made over the years based on feedback from players and observing online streamers, as well as the addition of several extra secret levels. A 4th episode is in development.

Let the festival of Blood continue!

It's been about a year since I last posted an update here on ModDB, so for people who aren't following me on Twitter I'll give you a peak at how Death Wish v2.0 coming along. 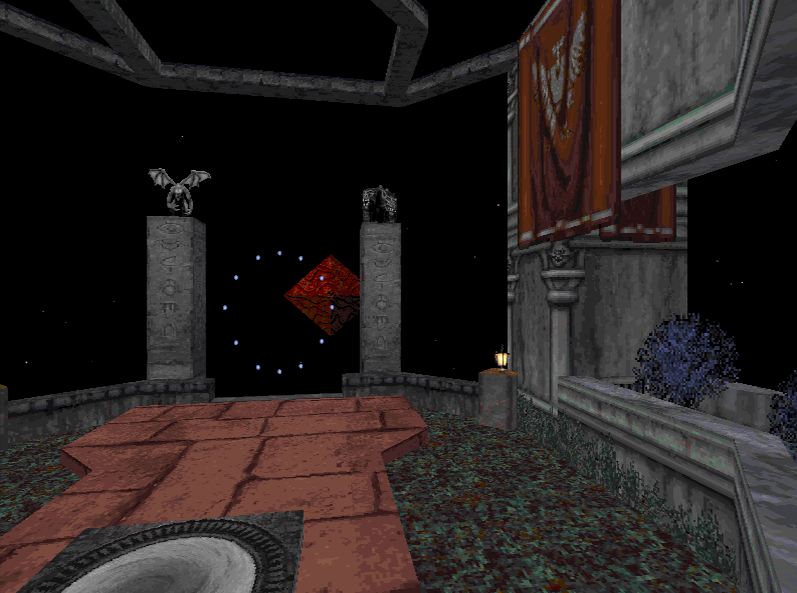 When is it coming out?
Sometime in 2023. It will include both the updated episode 1–3 and episode 4.

What can I use to play it?
Death Wish will remain universally compatible, playable in DOS, Fresh Supply, GDX, NBlood, Raze, etc.

Will the add-on soundtrack by Speedy work with v2.0?
Yes.

Don't you risk over-designing by continuing to update the old maps?
Not really. I'm held to the sector/wall/x-sector limits of the original game, so in most cases I can only add new content by removing something else. When I add new things, it's only at the cost of segments I deem less valuable, and you'll just have to trust my judgement on that. Some maps, like e2m12, don't need as much touching-up as others.

What's the upgrade status?
Old map upgrades are more than halfway done. Episode 1 is done, 8 maps are done in episode 2, and 9 other maps have received some changes but are not completed.

How much of episode 4 is done?
Episode 4 has 2 completed maps and a third about halfway done. I stopped to update the old maps so I could add some new features and introduce some concepts that I thought the player should confront before they're 30+ maps deep into the expansion. 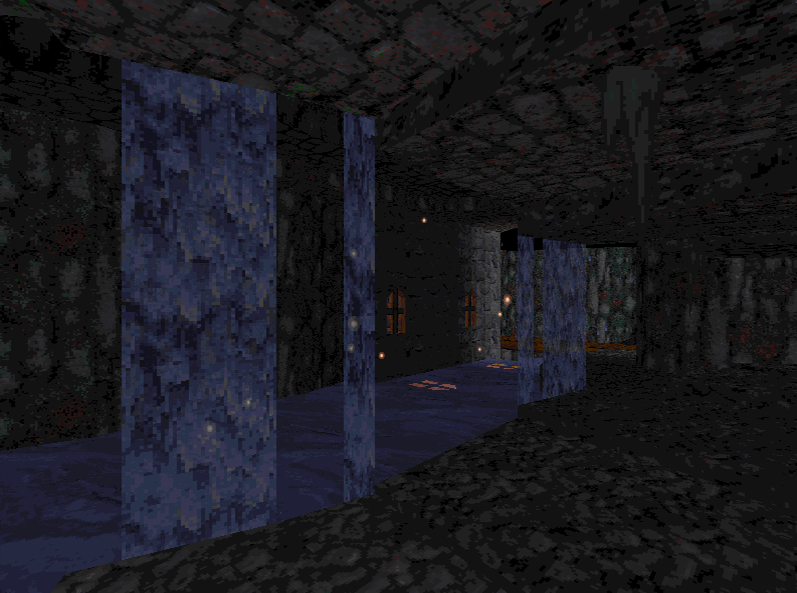 What's changing in the v2.0 upgrade?

One of the main goals of the upgrade is making things lean — cutting out areas that needlessly extend playtime, and using the resources made available from those cuts to add better content or enhance what remains. This was a big problem in episode 2, not only because it's longer than the other episodes, but there were a lot of spots that added up to player fatigue around e2m6 or e2m7, especially if that person is running through the expansion all in one sitting (good luck with that after I add episode 4). Even on a smaller scale, removing an unnecessary key requirement here and there can make for a better overall experience. Some special collectable items have been added to various levels, but they are all optional and don't require additional hunting unless you're dead-set on finding everything the level has to offer.

E2M5 (above) gets major layout changes to cut down on backtracking. 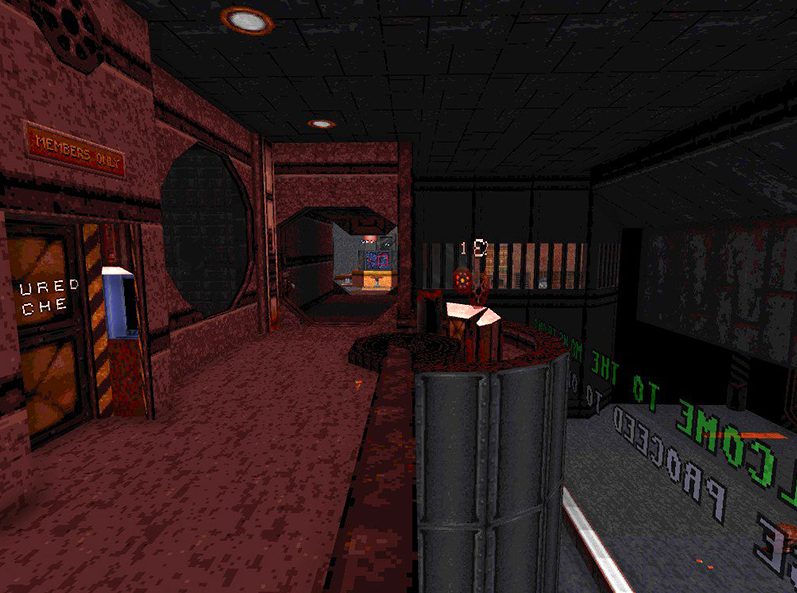 The updated E2M3 "Mothership" level (shown above) is a good example:

Speaking of new things to find, a special set is being added to each map: The Enchiridion and Codex. 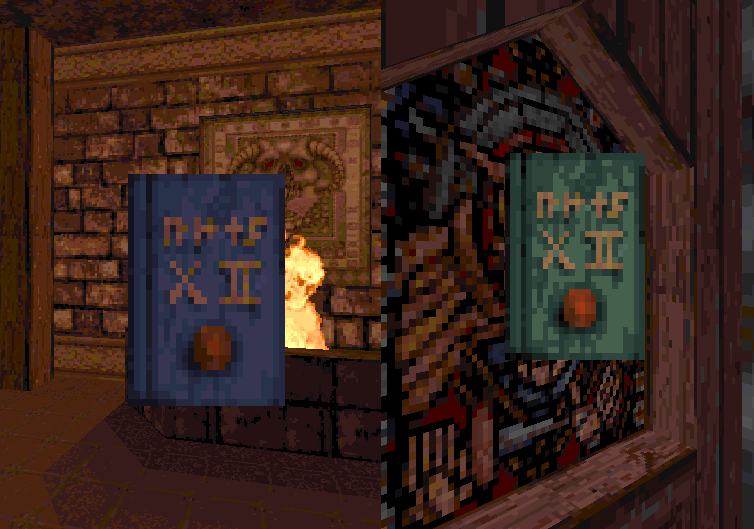 Pressing the Use key on either of these books will display a series of text lines that expand the lore. The blue Enchiridion tells the lore of the level in which it is located. The green Codex will focus on the events between previous Blood campaigns and how they tie into Death Wish.

These books are entirely optional, but will add some depth and context for those who find them. The Codex arrangement also allows for players the option to go through the entire library in "flashback" order on repeated playthroughs instead of chronological.

While the books are optional, their locations will still be included in the walkthrough (secrets section) to accommodate anyone striving for 100% completion. 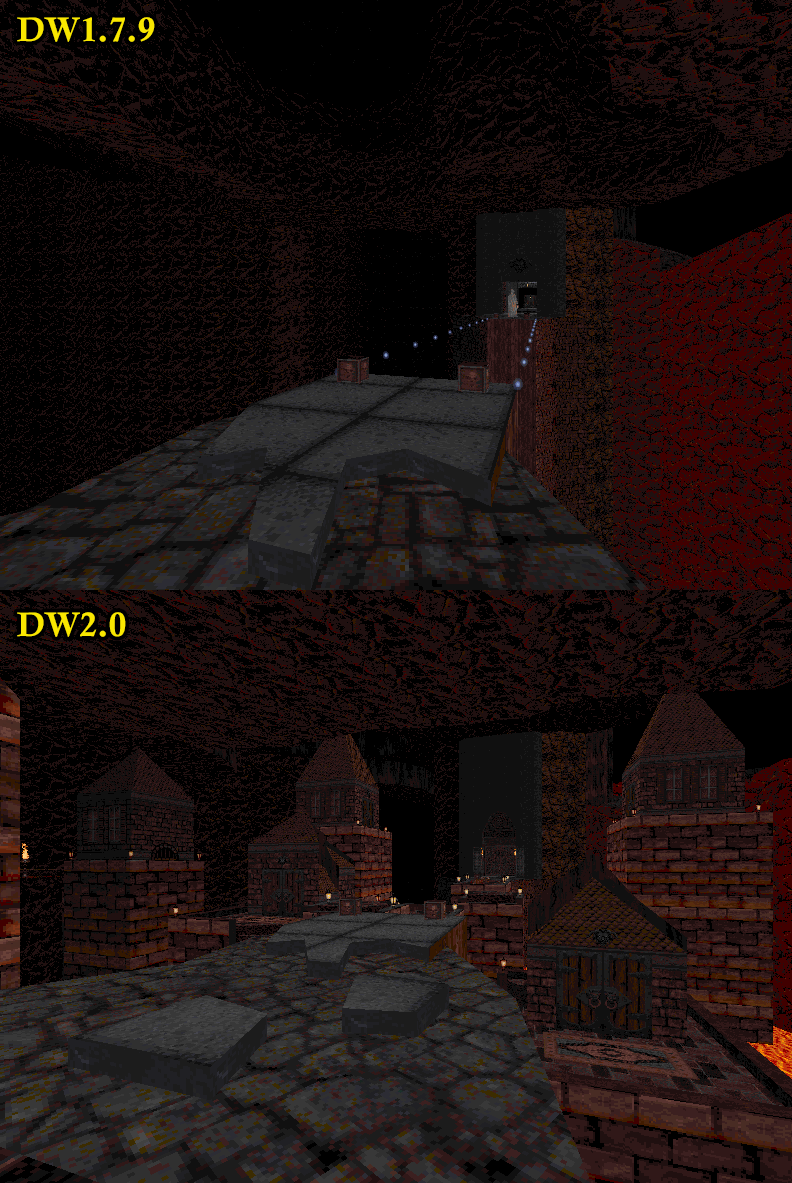 In a few places there is wiggle room for adding new architecture. I wanted to both improve the boss levels and make the transition maps more distinct from the originals upon which they are based. The boss maps in the original Blood are essentially throwaway maps, so that was the mindset I had going in when I initially created the ones for DW. Now that I've given myself a little more time to work, the boss maps are more interesting and come closer to the quality of the regular levels. The transitional maps are getting their own alterations, and will naturally diverge more from the originals as those get exclusive changes. 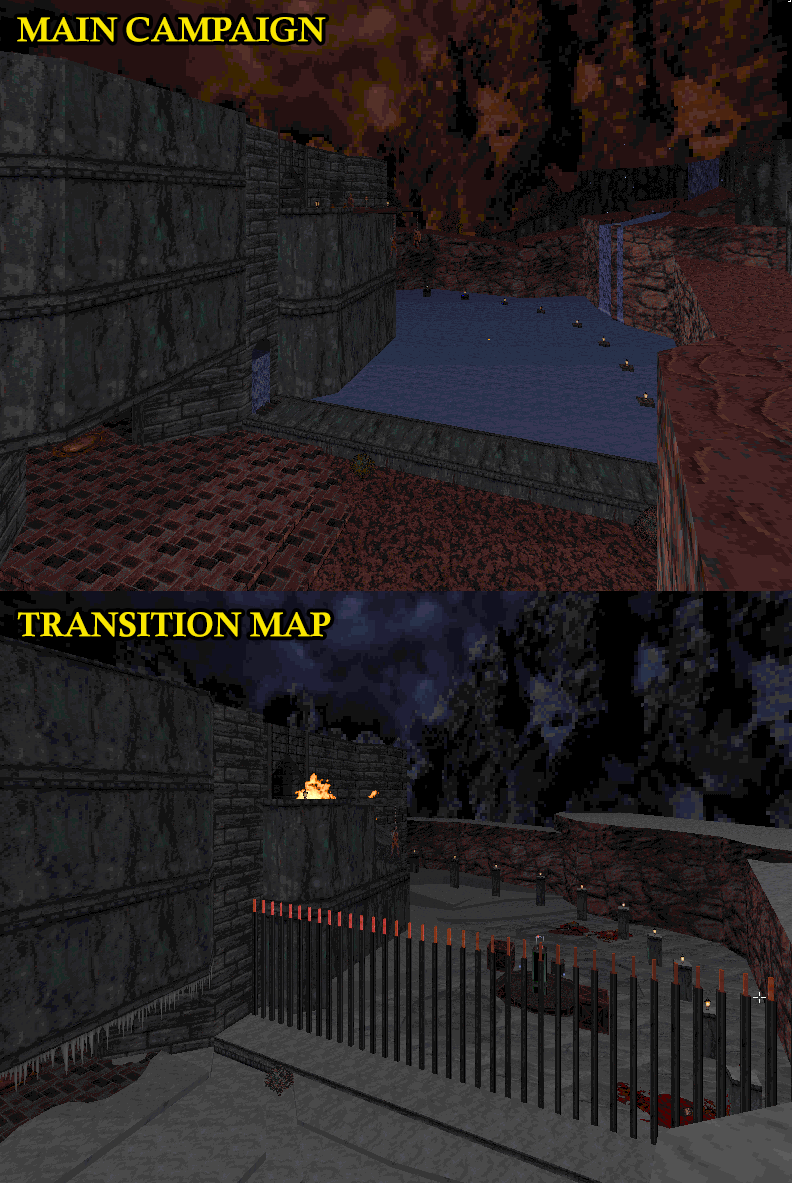 That's all for now. Be sure to follow me on Twitter for more frequent updates (usually weekly) that include videos and preview images. That's also a good place to ask me any questions you might have or to leave me a comment.

I've joined Twitter where I can post screenshots and videos (that don't necessitate a full article) more frequently. @BloodDeathWish

A new Death Wish episode is currently in development.

Death Wish 1.6 is out now! Includes upgrades, a new secret level, new areas to explore, and improved compatibility with Blood:FS/GDX/NBlood.

This is the 1.7.9 release of the Death Wish expansion for Blood.

This is an audio bundle by Speedy that adds new music for the Death Wish mod version 1.7.

for some reason whenever i beat a level it shows me the credits and does not start the next one, can anyone help?

You can't select the maps individually from User Maps - you need to load the INI file.

DOSBOX
Place all files in your Blood directory. Navigate to your blood directory in DOSBox, type dw, hit enter.

BLOOD: FRESH SUPPLY
Put all the DW contents in their own folder, and place that in: Blood > addons. When you start FS, go to Options > Manage Addons > Death Wish

NBLOOD
Place all files in your Blood directory. Choose dw.ini from the launch window when you start nblood.exe.

BUILDGDX
Place all files in your Blood directory. Set path to Blood folder. Under New Game, go to User Content and select "dw.ini"

RAZE
Place all files in your Raze folder. Drag and drop dw.ini onto raze.exe. The game will start up like it normally does, but now the Death Wish episodes will appear under New Game instead of the original episodes.

This is very exciting! I didn't even realize there was gonna be a 2.0!
And best of all, I can play it on FS so heck yeah! :D

May not be a new mod, but definitely will feel like it when everything gets touched up! <3

That's the plan! I'm implementing a lot of changes I didn't have time to make in the past, so the upgrades to the old content will be more significant than in previous updates.

What is recommended port for playing this? Because E3M1 (DW v.1.7.9) seems to be little bugged in never versions of nBlood.

Sometimes you just fail to complete E3M1 level cause there are problems with door no 102 [there's area with knife key] They just keep closed whatever you do. It happened twice to me. Only solution is level restart.

2nd small issue - if you jump up in the moment you are teleported out of chimney onto secret lifeseed, then lifeseed never spawn. :/

The door to 102 is a simple event trigger used I in dozens of other places, so I'm not sure why that wouldn't work unless nBlood did something to the Black chest item. For the 2nd issue, it sounds like you're jumping over the Life Seed, since it's just a simple placement (Mapedit doesn't allow respawning items).

Oh man, I was really hoping that there will be at least one major update per year somewhere around January once again... :(

This update is enormous so it's taking extra time. :)

i was hoping this was coming sooner than later, but genuinely can say the new episode is as anticipated for me as any "AAA" game release.

the map updates look wonderful and shows both hard work and creativity.

Place all files in your Raze folder. Drag and drop dw.ini onto raze.exe. The game will start up like it normally does, but now the Death Wish episodes will appear under New Game instead of the original episodes.

Amazing mod.
Out of the 30 levels I think there maybe only 1 or 2 I didn't like as much. Otherwise it's solid all the way through.

There is an amazing variety of environments all with different well executed atmospheres and interesting well thought layouts.

Gameplay is always fun and health-ratio is pretty much perfect in every map.
There is also some neat effects here and there and tons of secrets to find in each level.

A must play for any fan of Build engine games.