CSLA Mod was founded in late 2001 by Leon and Maa. Abbreviation CSLA come from Československá Lidová Armáda (Czechoslovak People's Army). Original authors (Leon was Czech, Maa was Slovak) wanted to make something touching both nations, and since original OFP took place in 1985, they chose the army of former Czechoslovakia.

Their first addon, was released in 8.I.2002, only six months after release of OFP. CSLA 1 addon included just retextured BI models and weapons with altered config, but it was more than enough back in those times. The units were used in „Operation Paranoid“ campaign. Almost all Czech mission-makers used it in their missions.

In January 2004, CSLA 2 was released and became a complete game modification. It brought many new units, vehicles and weapons and also new missions and one extremely long and crazy campaign „Red Head“, featuring naked women and 60-minutes intro. CSLA 2.1 (also known as Update 1) arrived 30.VI.2005 with new Resitance (FIA) units, remake of campaign from CSLA1, many fixes, brand new effects and reworked GUI. In those times, CSLA Mod started cooperation with many acknowledged mod teams and individuals, among others Mapfact, RHS, FDF, FFUR.

Operation Lacerta, which design proposed more realism, military-style missions and fictious desert units and environment, was stopped after CSLA Mod team was offered participation on projects of Bohemia Interactive Australia. In 2005, Terrain Pack 3 for VBS1 was co-developed by CSLA and BIA. Team members still participate on development of addons for Virtual Battlespace System.

CSLA 2.2, which is still under development, is prepared in cooperation with Python Art Studio and will bring more MP friendliness, addons and missions. New Army of the Czech Republic units (ACR) will be added, including woodland and desert soldiers and vehicles. Weapon a armor parameters are being modified in order to achieve a perfect blend between gameplay and realism. Besides this, CSLA team contributed also to ArmA.

ČSLA is READY for Arma 3! 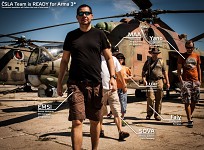 ... but before that we will release the final version of CSLA Mod for Arma 2:CO (with campaign with more than 60 missions)*
*few of them are only cutscenes of course

Hi folks, the summertime is almost behind us and we have some good news for you ... We are still working on a new stuff (and also improving the current...

Small application for converting WAV sound files to OGG and LIP formats which are used in ARMA series.

ArmaSeriesLauncher With this launcher you are able to run any Arma series game (like CWA, AA, A2, A2:OA, A3) with previously adjusted parameters and selected...

This package contains core Mod with all its upadtes and the AČR (Army of the Czech Republic) Addon created by the Python Art Studio (PAS).

How to play csla online? I play ofp on gameranger but it cant run csla,it runs only ofp resistance