CWC is a C&C Generals Zero Hour Total Conversion and also works with "The First Decade". It takes place from 1980-1989 and it features realistic units from the 80's.
We want CWC to be a mixture of realism and fun. CWC is more realistic than vanilla Generals, with real life weapon systems and side specific characteristics.
CWC offers 2 factions: Russia and USA. The Russians tend to use tanks and artillery (for example: T-72 / T-80, BM-21, 2S1 only to mention a few) while the USA rely on aircraft and high tech units (for example: F-15, F-16, F-117, A-10 etc.).

Also we have a lot of infantry in the game, not all of them are just cannon fodder. So engaging a T-80UK with a US Rifleman won't be a good idea. Other infantry units can be a real pain in the ass to armoured units though. We want the players to use more infantry than in regular Generals, where infantry wasn't the big deal. In CWC Infantry can be very useful, even against tanks if you have LAW/RPG-Soldiers.

For more information visit our Homepage at www.cold-war-crisis.de where you can get snips of information and brand new pics and downloads.

First of all, this service pack is for all CWC fans,
who have completed all 100 missions and want new battles. 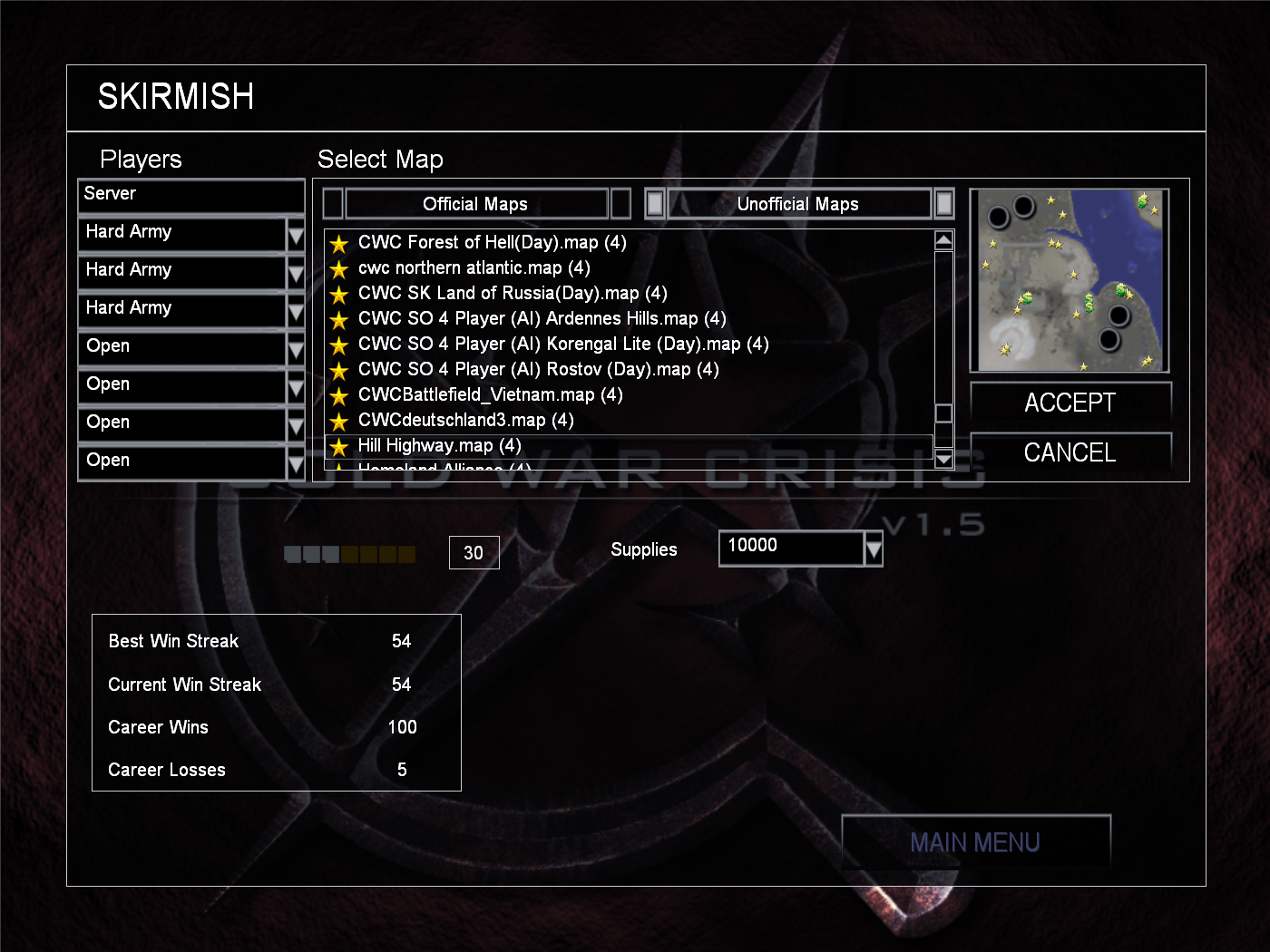 This package includes a new side - the General of the United States Air Force,
and a set of 62 cards that can be played by the forces of generals
CWCruGeneral and CWCusGeneral vs. AirGeneral USA 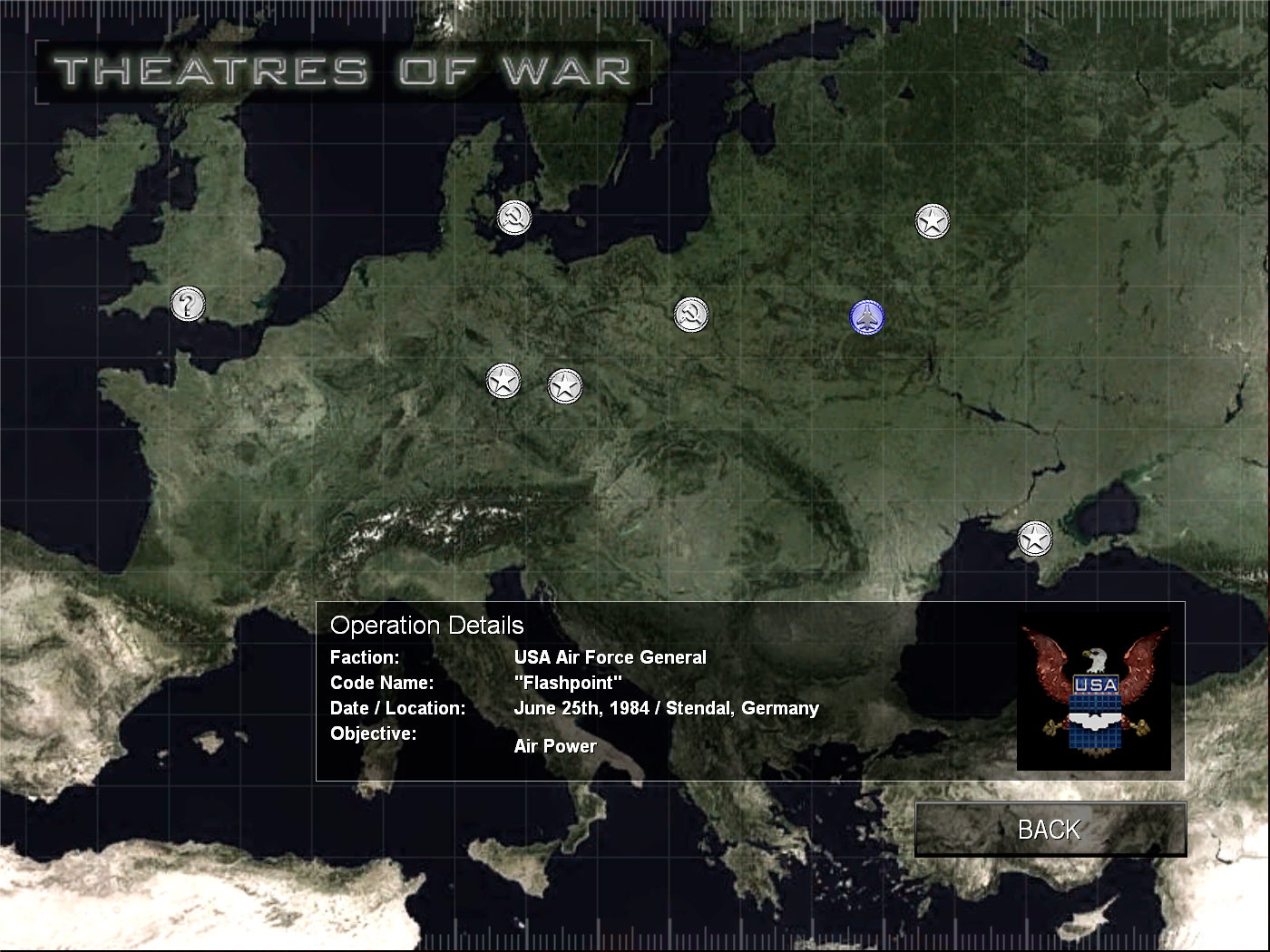 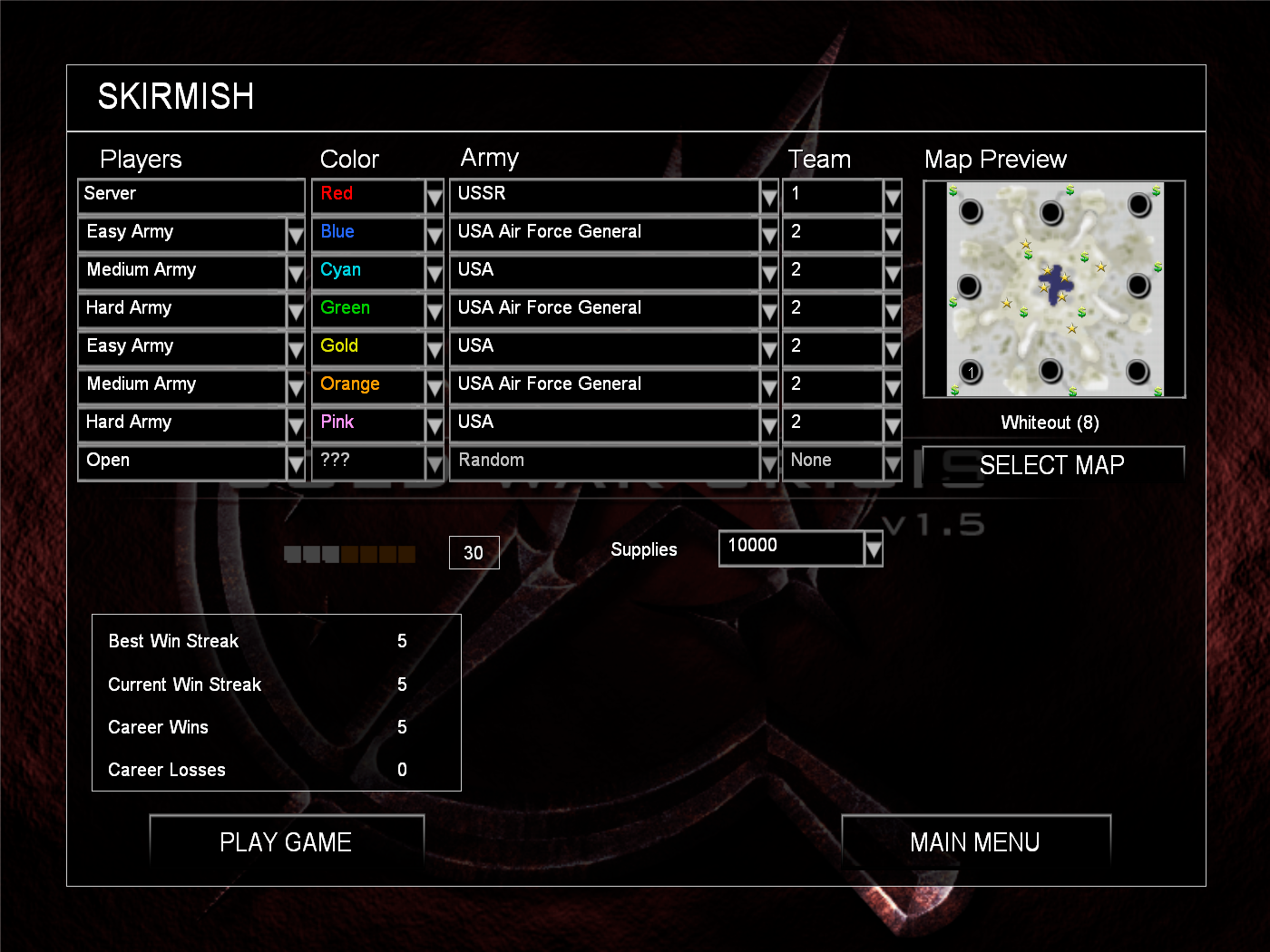 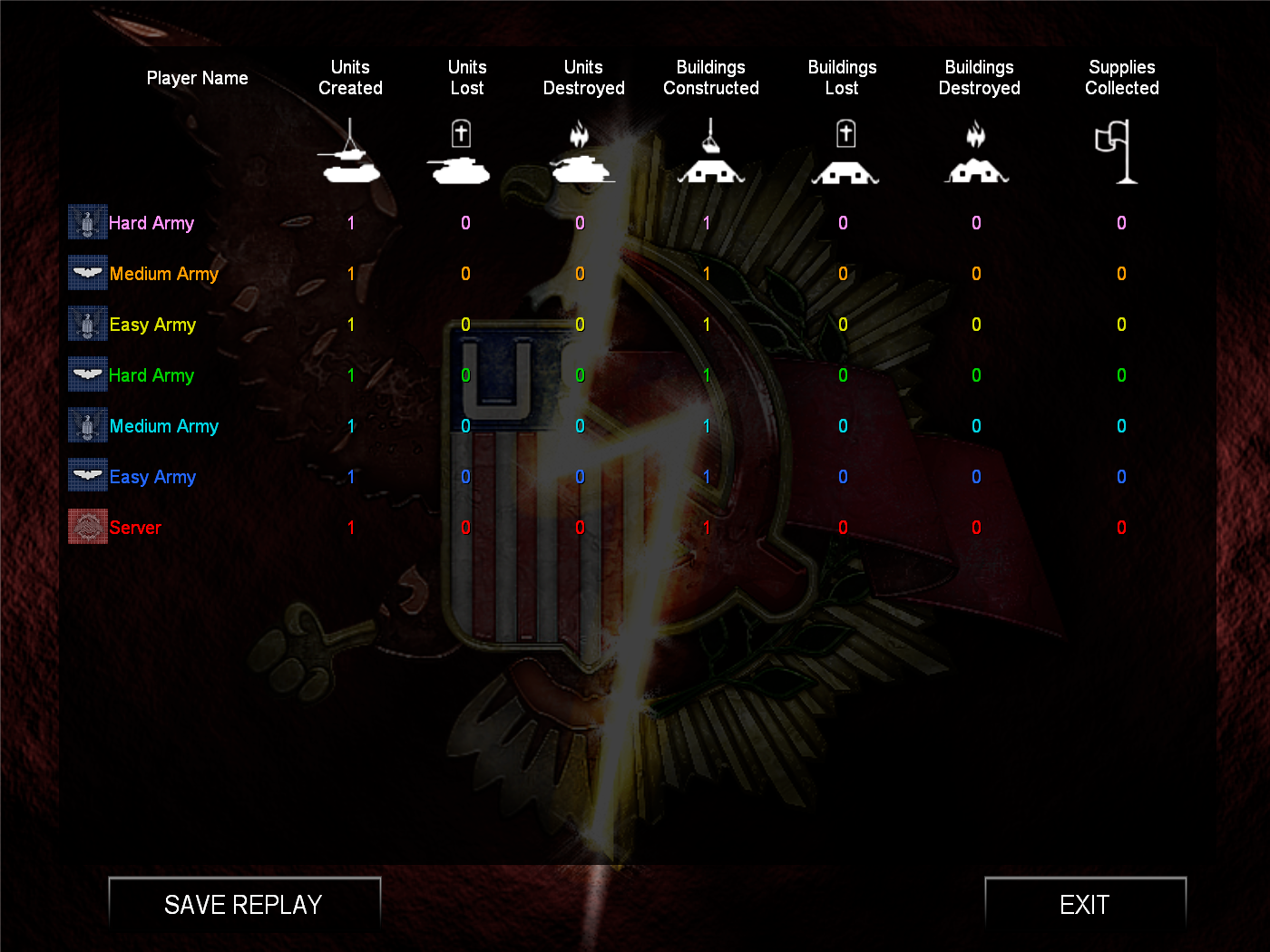 1.5 General scheme of replacing Airforce General units
to similar CWC units to maintain the balance of the parties:

1.6 List of units with dual purpose:
1.6.1 AirF_AmericaInfantryMissileDefender
knows how to shoot missiles at aircraft and tanks,
therefore, to maintain balance, he has a double set of weapons:

1.6.2 AirF_AmericaVehicleMedic
knows how to heal infantry and equipment,
therefore, to maintain the balance in the truck body
M939 Truck
how on mission CWCusMission01 put a repair kit + first aid kit

1.7 Action of updates for the AirGeneralUS:
Upgrade_AmericaAdvancedTraining
all units get new ranks twice as fast

Upgrade_AmericaSentryDroneGun
M113
gets a machine gun

2 - What has changed in the CWC code for balance with AirforceGeneral:
---------
2.1 Buildings
---------
2.1.1 - Destruction power of the AuroraBomb
is 1500 , so that the enemy does not destroy the entire base after
the first air raid, the minimum strength of structures was raised to 1550 ...
2.1.2 - AI is not fun to play against weak players,
AI conducts its attacks on 3 levels of difficulty:
2.1.2.1 the enemy did not build the SupplyCenter
2.2.2.2 the enemy started collecting resources after building the SupplyCenter
2.1.2.3 the enemy has built the StrategyCenter

so as not to keep the AI waiting,
two additional buildings have been added to the CWC:
SupplyCenter
collection of resources with the help of convoy trucks, in the convoy no more than 3 trucks

2.3.1 All aviation CWCruGeneral + CWCusGeneral receives parachutes to rescue the crew
2.3.2 All Russian pilots and winged infantry (VDV)
En.wikipedia.org
receives spare parachutes ...
-------
2.4 Faction
-------
Added United Nations faction
En.wikipedia.org
UN
The purpose of this faction:
2.4.1 - Transport aircraft, after the construction of the strategic center, can deliver UN cargo,
but these aircraft do not have (IFF) and can be shot down by air defense
2.4.2 - The main delivery of goods is carried out by UN transport helicopters,
on which the system (IFF) is installed, so the air defense systems do not react to them
2.4.3 - When a US plane is shot down, UN observers
mark the coordinates of the fall and transmit them to the UN helicopters
2.4.4 - If there is a free UN helicopter, it is sent to rescue the downed US pilot
and delivers it to the base.
2.4.5 - If UN helicopters do not pick up downed pilots,
then it can be done by the trucks of the convoy ...
----
2.5 Rank
----
2.5.1 Russian General CWCruGeneral
gains access to aircraft only at level 3,
therefore, the rank system has been increased by two more levels:
Rank6
elite attack helicopter Mi-28 Havoc
En.wikipedia.org
30mm cannon
Unguided rockets - NAR S-13
Guided missile - ATGM 16 pcs
Air-to-air - Igla-V rockets 16 pcs
Equipment for jamming radar stations and IR missile heads

Rank7
SA-10 Grumble
delivery to a specified point using transport An-124 Condor,
delivery order is made at the airport by calling a transport plane

2.5.2 Thus, for the Russian general CWCruGeneral
there are 7 levels at which it can repel attacks from AirGeneral USA aircraft:
Rank I
------
Anti Air Soldier (9K32 Strela MANPAD)
ZSU-23-4 Shilka
BRDM-2 SA-9 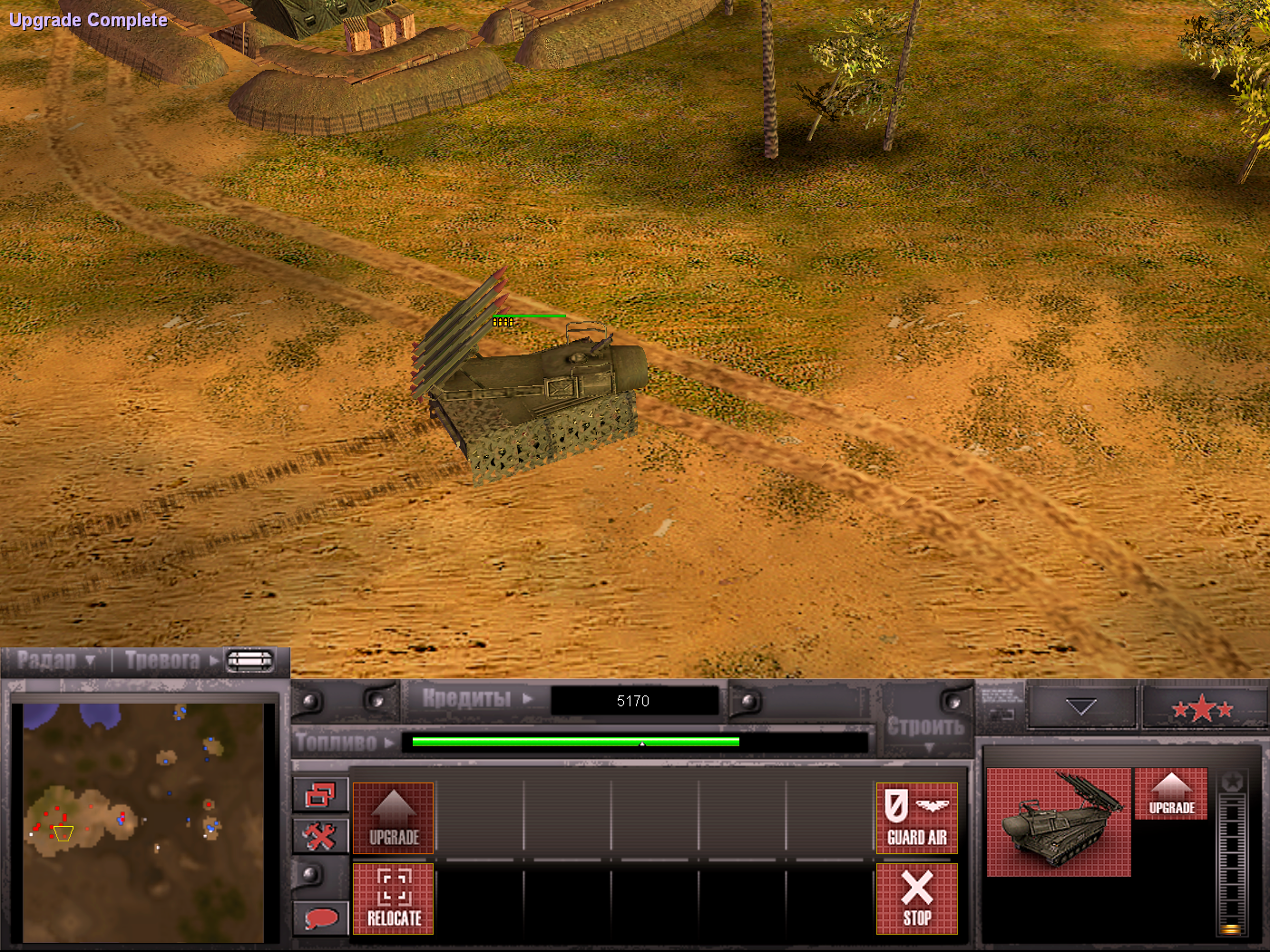 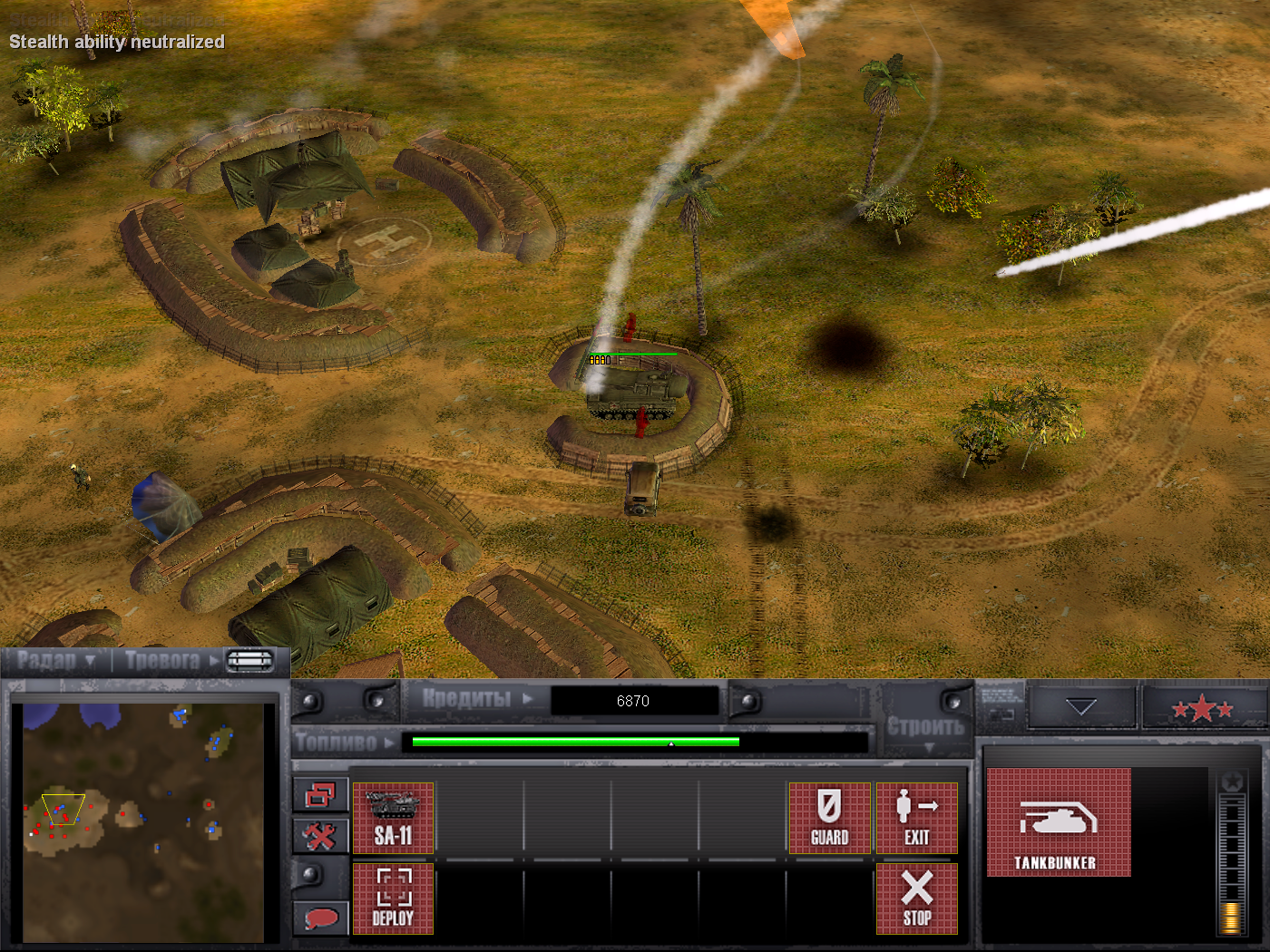 3.4 When placed in a Ural-375D tank bunker, it can give target designation to air defense systems 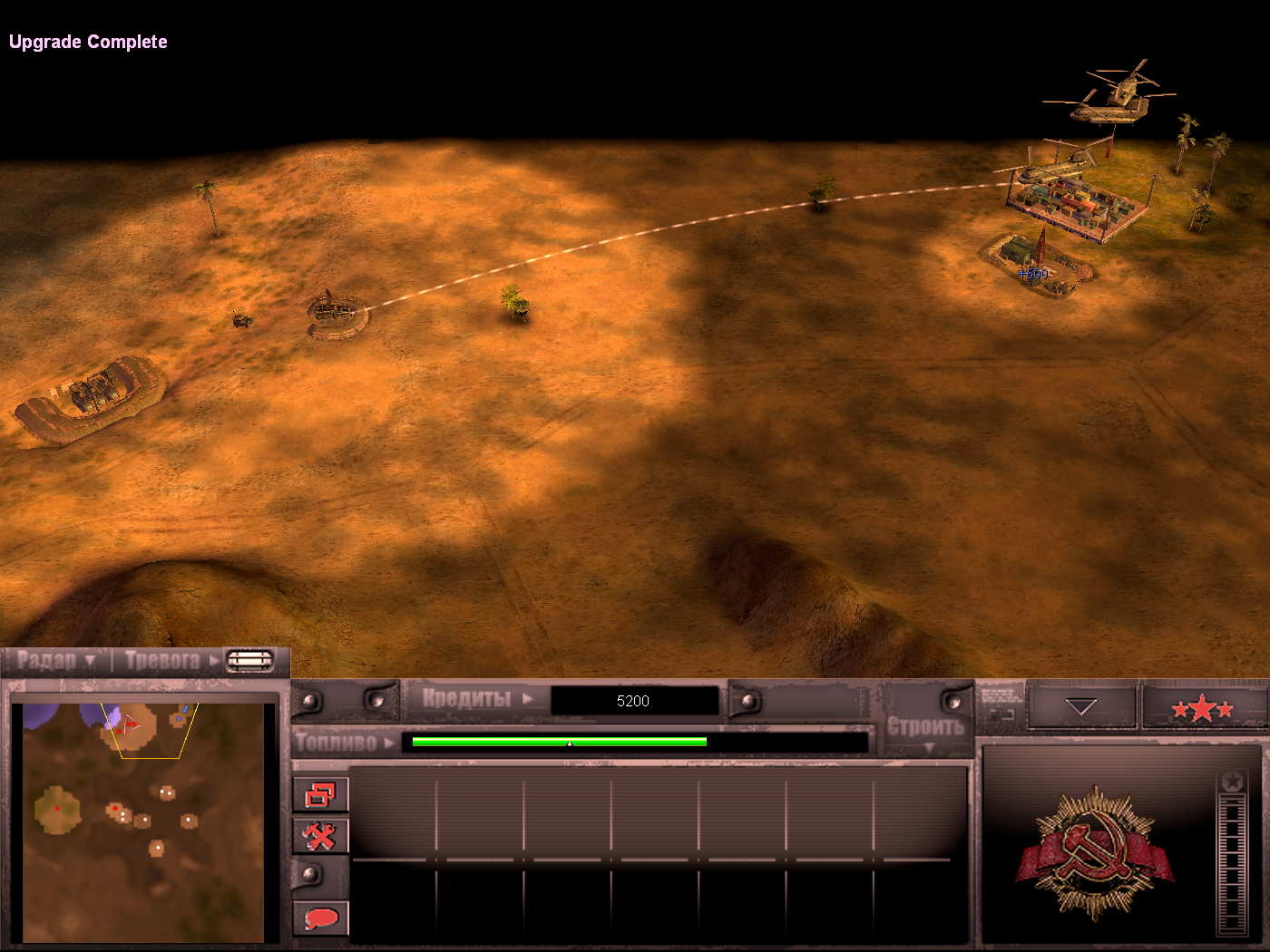 3.5 When placed in a T80UK tank bunker, it can use Shtora Anti Missile Defense 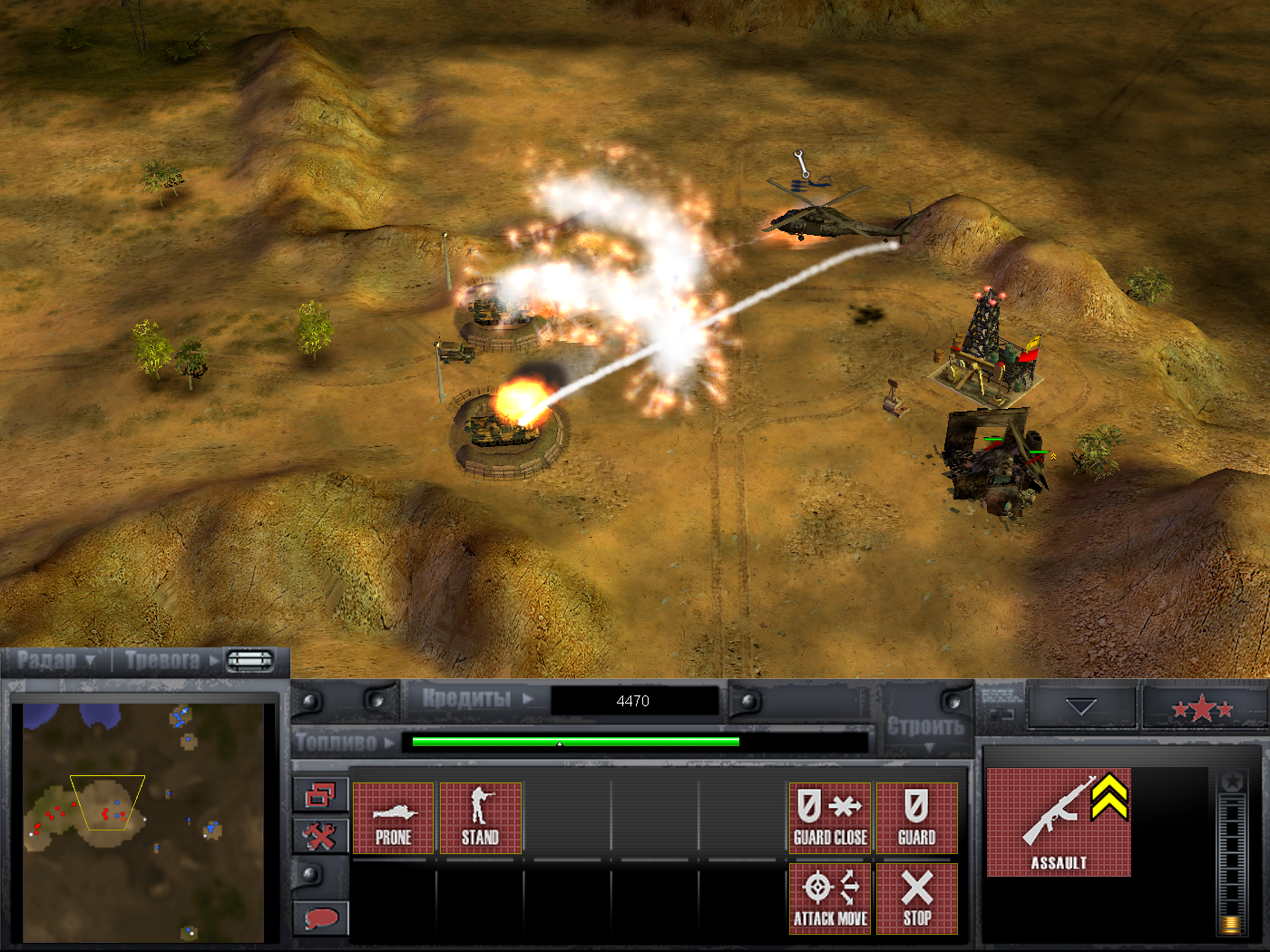 3.6 Since our potential allies and adversaries use identical US military equipment,
Forced color-coding of sides introduced for all AirGeneralUS combat units ...
3.7 Since the General of AirGeneralUS (AI Generals Zero Hour) does not even know about the existence of fuel,
so that the enemy's equipment does not stand idle at the base, when the oil rig is captured, a bonus is given in the form
one barrel of fuel
3.8 Generals' logos have been changed to identify generals and their specializations
with the view of their main type of troops
3.9 Changed camera settings for better observation of air battles
3.10 To allow the enemy to build a base on small maps and in mountainous areas,
conditions for starting construction have been changed
3.11 Due to the large amount of aircraft in the air, the ParticleCAP parameter
set to the maximum available value for this engine
3.12 Disabled primary intro screen for fast loading

4 - Notes:
4.1 - Creating balance is a very long and very delicate matter,
we tried to approach this issue very carefully,
without changing the original perfectly tuned balance in CWC
4.2 - To combat the main offensive weapon AirGeneral (invisible)
made small adjustments to their detection range ...
4.3 - All aircraft equipped with radars are visible on air defense screens,
therefore even transport planes and helicopters will be visible as shifting points ...

5 - Procedure for installing the add-on:
5.1 - The game must first be installed on the PC
Command and Conquer Generals Zero Hour Data
in any convenient directory, for example, on the X:\GeneralsZH
5.2 - You need to download and install Cold War Crisis v1.5 Final (V480DE):
Moddb.com
specifying the directory from the first item during installation, for example X:\GeneralsZH
5.3 - After installing V480DE you should have a directory structure like this,
full path, for example:
"X:\GeneralsZH\Command and Conquer Generals Zero Hour\"
inside there will be a CWC folder,
which will contain 20 files of the form _499_CWC.cwc - _480_CWC.cwc

To install the update, download the first archive
V480-Air.zip
and unzip to directory:

5.5 - To install a set of maps, download the second archive:

go to your personal directory, for example:
"C:\Users\Sergej\Documents\Command and Conquer Generals Zero Hour Data\"
where Sergej is your PC username

There will be several folders:
MapPreviews
Maps
Replays
Save

Since most maps for any mod can have the same internal map names,
before installing a package of 62 cards, make a backup copy of the catalog
"C:\Users\Sergej\Documents\Command and Conquer Generals Zero Hour Data\"
and then clear the folders
MapPreviews
Maps
Replays
Save

since the engine has restrictions on the number of stored files and does not allow
run maps with the same internal names !!!

6 - Questions and answers:
Question:
I installed everything according to the instructions, but the enemy does not build his base.
Answer:
The addon is designed to add AI Generals Zero Hour to the CWC world,
Thus, on these 62 maps, the following types of battles are possible:
1 - Human vs. Human (any of 3 sides)
2 - Human (CWCruGeneral) vs. AirGeneral USA
3 - Human (CWCusGeneral) vs. AirGeneral USA

8 - Known bugs:
8.1 - The 2003 engine has limitations on the size of shader memory,
and for the total number of ParticleCAPs,
therefore, during intense air battles,
when there can be more than 20 aircraft in the air on each side,
artifacts may be observed due to overflow of limits

8.2 Analysis of the V480DE code revealed the following problem areas:
8.2.1 - Heat traps that are dropped by helicopters and airplanes in a missile attack,
consume a large number of limits,
so all the flashes
CWCruCountermeasureFlare
CWCusCountermeasureFlare
replaced by default from ZH

8.2.2 The model of a Russian military plant gives artifacts when the total number of limits is exceeded,
replaced with a combined model US plant + trench

8.2.3 The aircraft, when flying into fragments, instantly clogs all the ParticleCAP limits,
therefore, in aviation models, this function is forcibly disabled,
but in practice, out of 100 shot down planes, 1 is definitely blown to pieces,
it is not possible to change this moment at the current time ...

8.2.4 Recommendations for settings to reduce the number of artifacts:
disable two checkboxes in the settings:
3D Shadows
Behind Buildings
visually, the quality will not be lost, and the size of the free limits for the game will increase ...

Thanks for helpful tips and publications
G.Geo
n5p29
Creator

I will add more than 50 new maps to generals cwc mod.

Ten years ago CWC was revealed to the public. Let's beginn the next chapter.

What a great day to celebrate!

On April 20th, 2004 CWC was released to the public, which happens to be exactly 9 years ago today. That's a great reason to celebrate, if you ask us...

The Genesis Project - A Cold War Crisis Map Generator can generate complete and fully playable skirmish maps in a matter of seconds. And do you know what's...

This is only the source code! The Map Generator itself is a different download in the download-section! The Genesis Project - A Cold War Crisis Map Generator...

Requires: CWC 480 Full. All old CWC patches for MANUAL installation starting from 479. In case your CWC Auto-Update works fine or if you already have...

Mac version of Cold War Crisis v1.5, build 477, ported & packaged by super_kev. It comes with the installer & launchers to allow the mod to be...

Map.ini and map.str files for the secondary objective introduced in version 1.3.

The final version of CWC including all twenty patches since our original 2008 v1.0 release and the 2005 demo mission now re-packed as v1.5! Still requires...

I wish there was a spectator/observer mod so I can just watch AI fight each other.

You can start 3 or 4 player map with you and 2 hard AIs. Once the game starts sell your Command Center. After that you can watch AIs fight each other. :)

This mod brought me so much joy as a child, and here I am over a decade later redownloading it to tryhard at it. fun times!

Why would there be? The mod is complete..

Hi there, wanna play some games?

This mod is how Generals should have been. The quality of the work done in CWC is remarkable. I followed this mod ever since I first saw it in 2005, the first things that caught my eye was BMPs floating on water, just like in real life. The only game I had seen that in was Operation Flashpoint. So began a long wait, I visited the CWC website every week looking for updates, and every time there was an update it gave me a smile. I eventually registered at the CWC forums and posted a few posts. My…