The Circle of Eight modpack has been upgraded to version 8.1.0. Please see download links below.

After ten long years, the Circle of Eight is pleased to present the 'final' version of our modpack - Circle of Eight Modpack Version 8. This release falls ten years to the day after the release of The Temple of Elemental Evil in North America. It is the culmination of years of dedicated work from literally dozens of contributors, and it serves as testimony to the enduring passion for quality turn-based strategy games in the modern era. 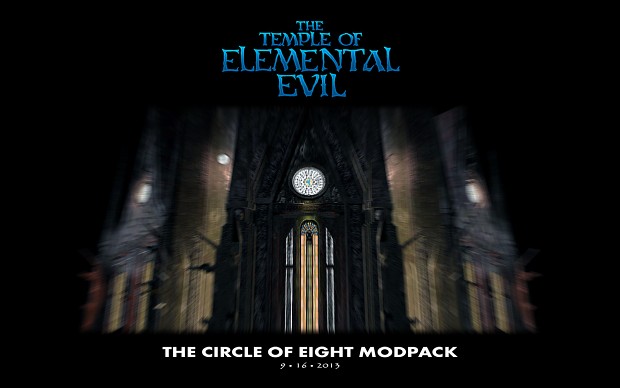 Please see the included release notes for a comprehensive changelog, or visit www.co8.org..

The Circle of Eight would like to sincerely thank Troika Games and all its employees for ten years of enjoyment, entertainment, enlightenment, amusement, frustration, and ultimately triumph. We only hope that the modpack brings ToEE a bit closer to what you had wanted it to be from the start.

To everyone else, thank you for playing. And as usual, we sincerely hope that you enjoy this final edition of The Circle of Eight Modpack.

Circle of Eight issues a variety of upgrades for the version 7 modpack.

Circle of Eight issues further updates for the version 7 modpack.

Circle of Eight issues user interface upgrades and other optimizations for the version 7 modpack.

The Official WorldEd and V2Brute programs for editing Temple of Elemental Evil mobile objects and visual particles. Previously released by Atari as part...

Hi all. I have some questions:

- Is there any possibility to change the animation attack of the rapier?, change it to dagger kind attack (only thust attack / pierce).

- Is it possible to add the Estoc?
Outfit4events.com

- Is there any chance to add more armor like the maximilian kind?

There is a chance to remove all content that alter language? Because I want to play in german and this mod changed all language files. So I only want the engine & technical fixes. Or can someone translate this modpack into german please?

.
I'm playing TEE with the CoE mod with the extra content, and it is launched via the latest version of the Temple+ mod.

For some reason, my lawful good human level Paladin is one level behind all of the other party members. The party's alignment is True Neutral. Is there a reason for why he's an entire level behind every other character? Currently, the entire party, except for him, is at Level 3, while he's only at Level 2.

If it is a bug, is there a config file that I can open up to alter to allow him to finally be at the same level as his comrades, and that will allow him to then level up thereafter correctly? Also, I don't want to lose the xp that he's already earned beyond the level threshold.

Any detailed advice will be very warmly welcomed.

You picked a race with level adjustment, probably aasimar. if you don't want your pala to lag behind one in levels you have to pass on the +2 cha and +2 wis and play a human

Bought a new tower and everything downloaded fine, the game plays well but I can't get the level cap off. I went into options and tried both 16 & 20th lvl limit but characters keep stopping at 10th with the 45,000 cap. Any help please!! Made it to Verbobonc but my 10th level characters are getting their ***** kicked! :(

I installed the 8.1.0 version normally guys, all was ok, but when i beat Zuggtmoy, instead of the game continuing, it just ends. Additionally the orcs quests as well as the Moathouse respawn have not appeared yet. I tried reinstalling but it does not work, could please help? This mod seems to be amazing

Yes the game ends, but go to Hommlet and bring up the world map. Verbobonc should be listed in the area box :)

Any group that tries to improve a buggy game deserve a high score. Now highly playable and enjoyable.