Long ago, in the land of Flanaess, an evil demoness founded a cult dedicated to exploring evil in its most elemental forms. This cult was based in a temple just outside the village of Hommlet in a vile shire known as Nulb. Soon, this cult ruled the region with tyranny; times of chaos and violence ensued. Hard-fought battles were waged and the war was eventually won by the good armies of nearby lands. The temple was razed, the villains were imprisoned, and order was restored. The temple itself faded into distant memory...until now.

Recently, bandits have begun patrolling the roads outside Hommlet and wicked forces are rumored to be afoot, converging on the ruined temple at Nulb. Their purposes for such meetings are as yet unknown. The identity of these people are equally a mystery. Some claim they are bent on slaying monsters and maintaining order within the region, but no one can be sure.

So begins your adventure within the Realm of Greyhawk. It is an adventure that will lead to the source of a deep and abiding mystery, to the very core of evil itself.

* Multiple story paths and multiple endings
* Five controllable characters and three followers in each party
* Richly varied environments populated with reactive NPCs
* Based on the Advanced Dungeons & Dragons 3.5 ruleset
* Characters that can be customized with skills, feats and spells
* Brought to you by the creators of Arcanum
* Party-based adventuring and tactical turn-based combat
* Gameplay that supports all alignments
* Formidable obstacles including a wide array of monsters
* First PC game based on the classic Greyhawk module

Hello again folks, it's time for another update! 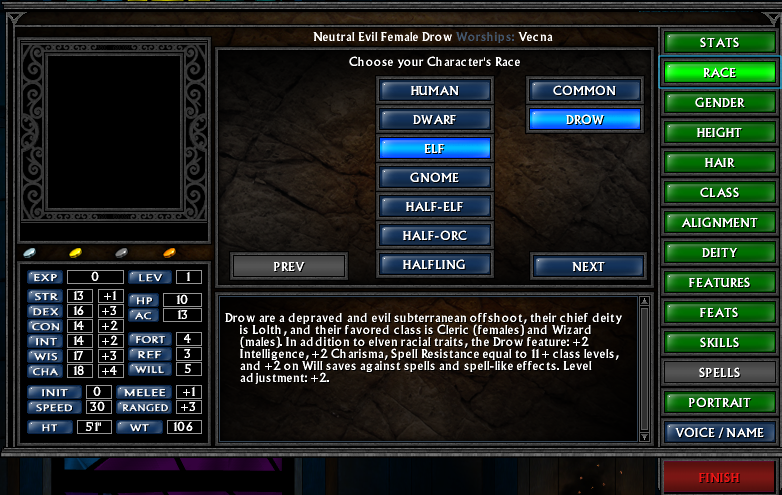 Needless to say having a PC Hill Giant or a Troll makes much of the early game fairly trivial. Nevertheless it's still quite fun to watch your Troll shred your foes to bits with its Rend ability :)
Be aware though that due to their level adjustment modifiers, these races level up quite a bit slower than normal characters. Especially Trolls and Hill Giants who also have racial HD, which makes their Effective Character Level equal to level 13 / 17 from the get-go!
Also, don't expect any special reactions from the NPCs in the campaign. Content modding (dialogues and such) is outside of Temple+'s focus, so just consider it a fun addition :) 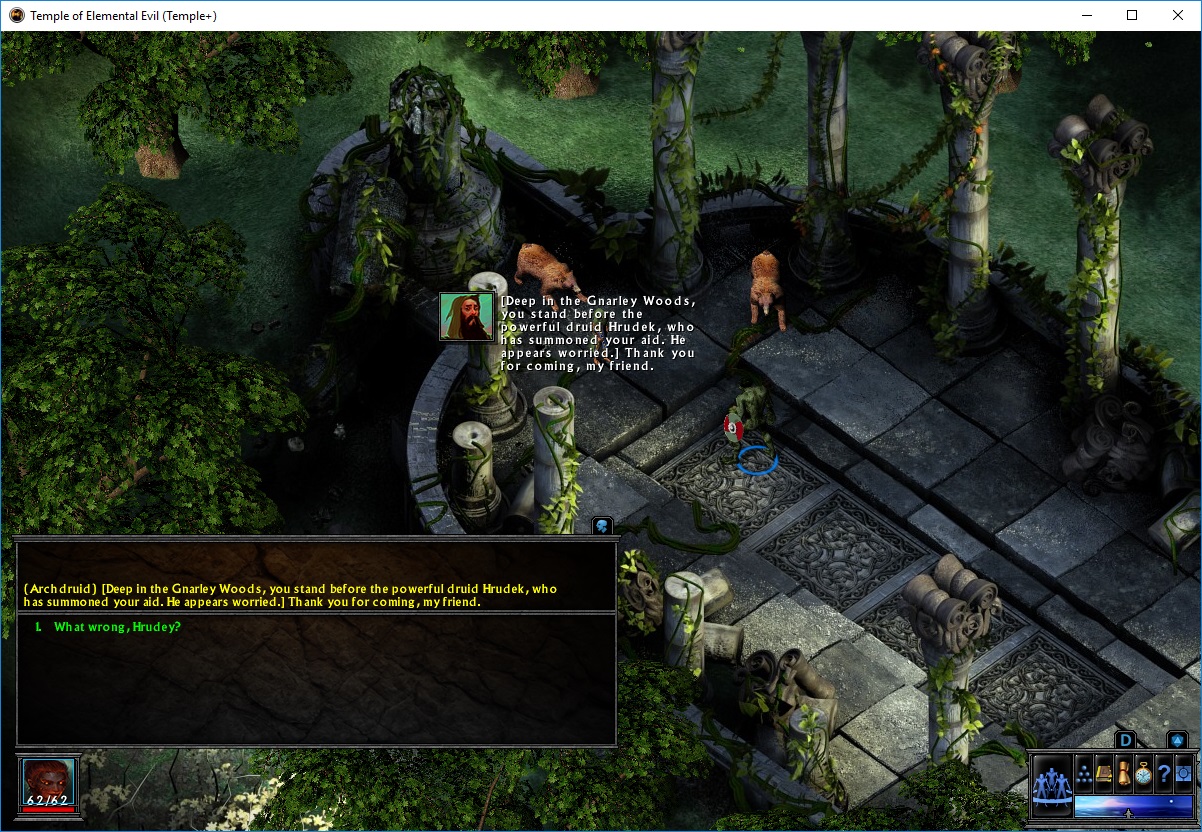 You can now Troll the game :)

This update also lays out the foundation for moddable races, similar to how Temple+ lets you create and customize character classes via python scripts, without touching the actual C++ source code.

Other than the above races, we're aiming to add to the main mod all the extra PC races found in Icewind Dale 2. It's still too soon to say we're embarking on that long Total Conversion road, but having some of the elements laid out is a good start :)

The other big news is that Wall spells are finally here! Well at least one of them is ;) This release includes Wall of Fire, available for Co8 users. That said, adding the other wall spells won't be straightforward, since they all have very finicky rules. This does open up the possibility for modding variants of the Wall of Fire spell (Wall of Icy Fire, anyone?) 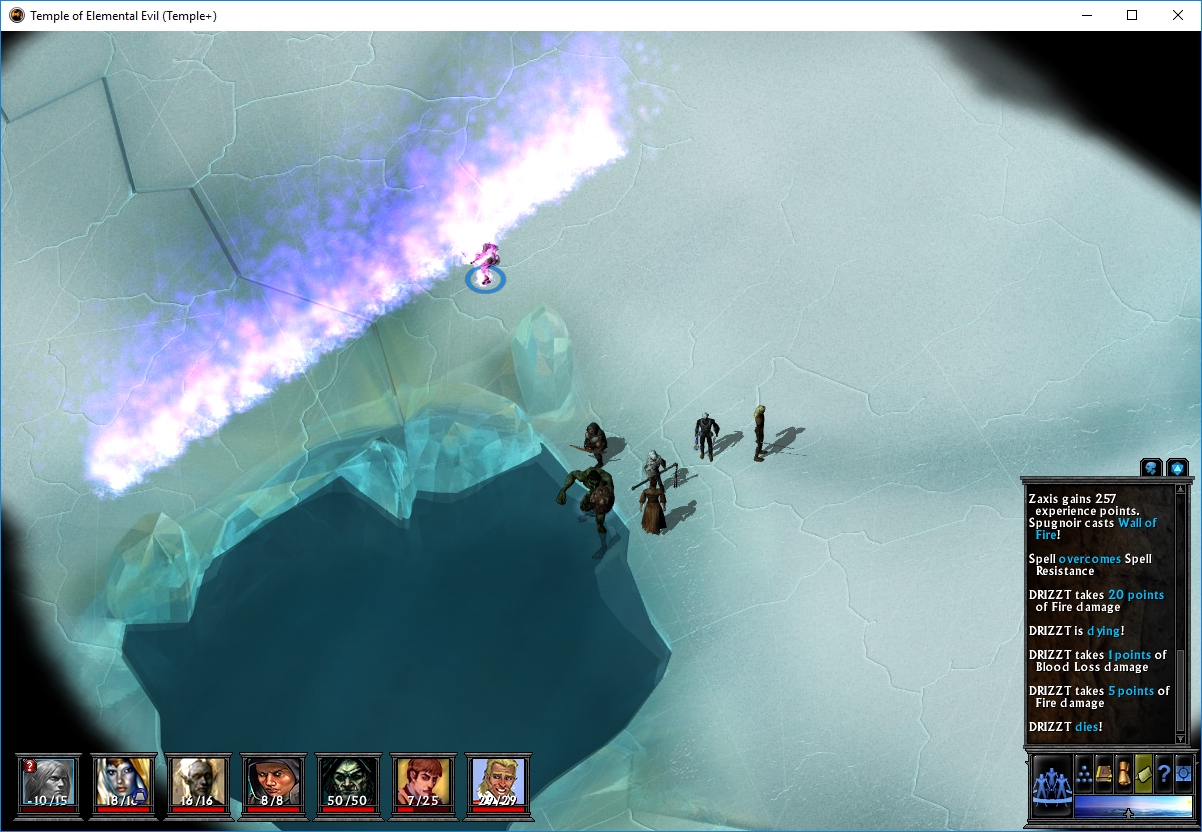 The past few months have also had numerous feat contributions from users IPDT_FE and doug1234. Most of the martial classes have some new options now, all taken from the various D&D 3.5ed supplementary materials.

Another nifty feature added in the last few months is the Walk option. As you may have noticed, in ToEE your PCs always move using the run animation, even for short distances while walking about in Town. Though ToEE did have an option to disable running, it was tucked away in a config file that had to be manually edited, and even that was buggy. 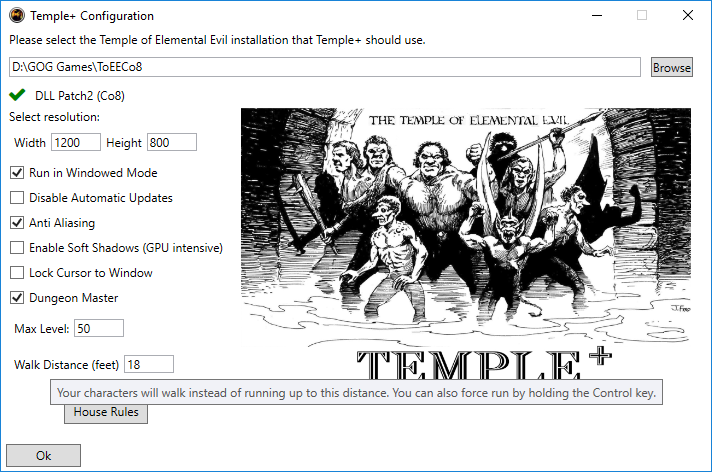 Set the walk distance in the configuration, and watch your characters casually stroll through town...

Temple+ now introduces the Walk Distance option in the configuration utility to solve this issue. It allows you to define what minimal distance triggers the running animation - if your destination is closer than that, your characters will walk there instead. The default is 0 - same as vanilla, i.e. always run - but now you can set it to say, 20 feet, and watch your characters casually walk instead. You can also set it at a greater value and override it with Ctrl+click, which will force your characters to run.

The DM repertoire has also been slightly expanded, as now it includes a Fudge Rolls tab and an option to edit (or heal) HP damage. Personally I've found it invaluable when testing things, but you may also use it for whatever suits your needs and preferences ;) 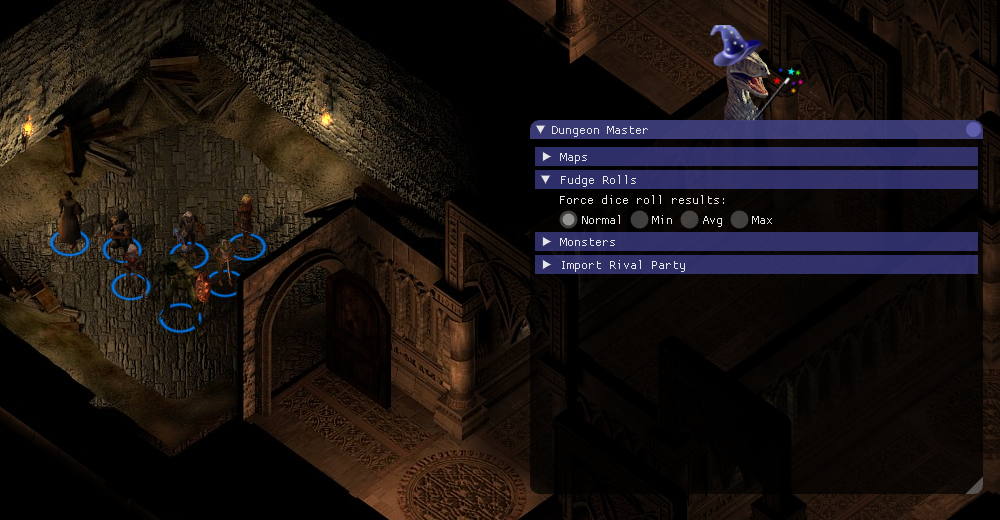 The DM now allows you to fudge rolls. For better or worse :)

As tradition dictates, whenever I playtest an upcoming major release I get fed up with some tedious aspect of the game and take the time to improve upon it. This time it's the looting UI, which now features a Next button. This allows you to cycle through nearby corpses without having to exit the UI and pixel hunt the next corpse in the pile. Take All has never been easier :) 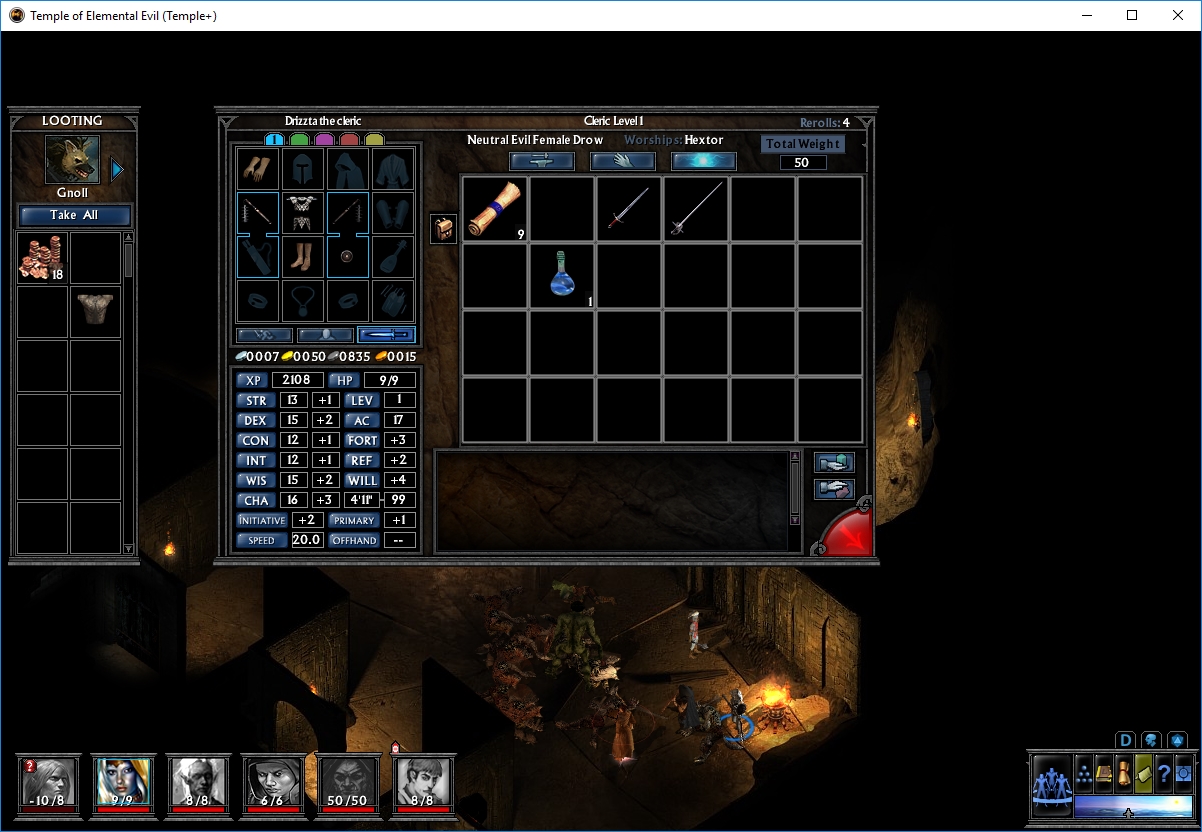 Having trouble pixel hunting that last corpse in the pile?
No problem, now you got a Next button right next to Take All!

Other than that we've also fixed numerous crash issues and bugs you've reported in our forums (and some that you didn't as well ;)). Judging by our bug-report inbox, it looks like we got most of the crash issues down *knocks on wood* but in case we missed any, you can send bug reports to our email at templeplushelp@gmail.com or post it on the forums. Crash notices will also provide more detailed instructions on how to file helpful reports now, so please follow them ;)

A big shoutout to contributors for this release:

Temple+ celebrates its first 6 months out in the wild! With Prestige classes nearly finished, what's next in store?

What we've been up to these last couple of months!

Allows you to enter Eldrtich Knight and Mystic Theurge earlier

Removes racial HD for monster races (Trolls & Hill Giants) so they are easier to level up.

why is this game so laggy and buggy. seriously... my summons dont attack due to amount of units on the screen. and since i cant even control them they become totally useless when the game lags.

please i beg you, someone reply to this.
i play TOEE with Co8. I leveled my druid 5 and i was so much dissapointed from the *Wild Form* skill. Please tell me if this skill evolves with level. tell me that im not going to be this little wolf forever with -3 and -4 to my STR, DEX, CON.

it becomes a brown bear and a polar bear. and, near the high temple of haredrk, the big guy with the cool gear, there's a "hill giant" who's actually a druid girl, he has a ring that can help you change into a hill giant :)

Great game with great combat system. I want to replay it with CO8 mod.

Everyione that likes this game should REALLY check Knights of the Chalice, it has a demo, if you like turn based combat rpg it's really great!

Is this a proper RPG? how are the dialogs?

Sort of. It's the faithful adaptation of a famous D&D module.
Its strong point is an unmatched turn based combat system, but all the "social" parts are quite boring and uninspired.

That said, the game has plenty of dialogues and options branching according to your party stats and special abilities.

On the disc and since Circle of eight worked on the game Temple of Elemental Evil. My question is that on the disc has a cheat that a person creating a new character can have 18 in all of the stats for the character. Since Circle of eight worked on getting the bugs out of the game. I am wondering if the stats can still have all 18s in all of the stats by dragging a stat to the right and letting it go? Then it becomes an 18 in the basic area?

So I was wondering, if anyone knows, if this games play-style is similar to Diablo II, Dungeon Siege, or pretty much similar to a 'dungeon-crawler'?

Still no answer to a question I asked earlier this year...sad.

I know dumb questions do not excist... but if you look in the description you will see there is a turn based combat system. So no it's nothing like a hack 'n slash/realtime roguelike.

It's like baldurs gate, icewinddale, torment, since i anticipate you don't know those titles it's a bit like dragon age origins too.

Tags
Embed Buttons
Link to The Temple of Elemental Evil by selecting a button and using the embed code provided more...

Druidstone: The Secret of the Menhir Forest Party Based