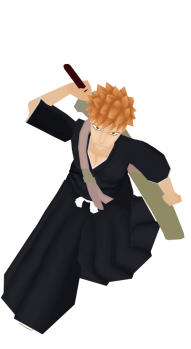 Looking for updates? Check the articles and comments below.

Bleach:Zanpakutou Senshi is a totally free Total Conversion of Half-Life 1. It´s based on the japanese hit Anime Bleach.

You will be able to play as Kurosaki Ichigo and Grimmjow Jaegerjaquez for the first release.

This game is under development and will release 2021.

This mod is not related to Studio Pierrot or its production.
© All Bleach related characters, locations and other copyrighted materials remain the property of their respective owners.

Bleach Soul Slayer was founded by Ryan (Anubis). 11 years ago the group reformed with Chris (Tacef) as BZSmod and ever since the group has been working towards achieving a game that could represent an immersion of the battles in Bleach, though your controls.

Over the last ten years a lot of ideas, people and events took place which bought BZSmod its many failed attempts to obtain its goal but also its many highlights that united no less than 14 developers, ranked #39 on moddb in 2015 and was part of some individuals career development.

Today we are approaching the final milestone, and we confident that we will release this mod within 6 months.
To Joshua and I, it is really important to show that we did not get to this stage by ourselves and we want to honour the original idea as well as the journey.

We are currently working on a credit screen to the menu and we would like to every contributor to be represented in that list. We have the details of most of our previous members, but we would like to verify that we did not get something wrong.
If you worked on the mod, please send us your details to contact@bzsmod.com and we will confirm them to ensure that we them right. This also includes participants of BSS.

The final steps, what can you expect?

While the Gantt chart will show that we will be done by Christmas, we often underestimate the time required to complete a task and overestimate the available time to do so. Therefore we currently want to set the release date for Q1 2021.

In the new plan, the code is a bit behind due to lack of sleep. as such it can be easy to see how Q1 2021 is more realistic.
Joshua have been testing the mod and found some flaws that needs to be resolved for a good experience.
Some issues related to movement speed and collision detection on ranged weapons has been resolved; but a few issues remains to be resolved.

We will be making 2 articles showcasing Ichigo's World with its teleporter feature and Hueco Mundo.

We will include some renders of the mascots Kon, Rerin and Korodo, who will be placed as easter eggs in some of the maps. They were initially considered as flag objects for a customized capture the flag type of gameplay. We decided to include them due to all the hard work Angel did, and we think it will be a nice touch to make you search them out in the maps.
Perhaps you will also get to see Ichigo's animations in use during the showcase.

We intent to release the mod with a public domain right, bringing as much of the source material as possible. We had this option covered since 2011, but we might not be able to provide the material prior to this date due to the lack of formal agreements that provided such a right.
Most material should be available to use with free software, such as the 3d models that have been converted to blender projects.

It is also a single release, we don't intend to support the mod with additional patches unless there are some serious issues. It is however possible for us to provide support to anyone who want to use the material in a different mod or extend the development of BZSmod.

On a final note

We would like to express our thanks and gratitude towards all of you who have supported us in the past and support us now. BZSmod lives this day due to the combined investment of developers and fans who have shared a passion for Bleach and a united a ton of ideas into a project barely suitable for an engine like GoldSrc.
To some of you BZSmod might just be a game, but has been life changing to some of us.

We are extending the deadline for releasing BZSmod due to unfinished content, which we deem necessary to provide a good experience.

Over the past couple of months we have been working hard on improving the combat experience before proceeding with new features such as Ichigo and new...

Update #28 No April fools, only progress!

6 weeks has passed and it is about time for a proper update. Make sure to catch us on discord if you want to know more about the development. Unfortunately...

In this update we will reveal the project plan for BZSmod and follow up on the outcome from the last dev meeting.

A revisited and more specified game design document, which focuses on the immediate development and less on the vision. The document also reflects upon...

Where is the mod?

Dear Sir,
Could I be of some help to you? I am currently working on the field of modeling and animations. In fact I have created a small game on Unity, that I haven't uploaded yet since it is unfinished. I am still kind of in training. If you have no problems with it, would you be willing to assign me some of the parts of this project to work alongside your team? Otherwise, if you have any problems with it, then I apologize for troubling you.

Hi. It would really be up to Joshua if he needs any help with animations. I would recommend asking him on Discord.

However, I would actually recommend you to finish your own game instead.
2 parts:
1. Joshua isn't a master animator, his limited experience will most likely not provide you with a good mentorship.

2. There is a subject I want to write a book about, and it is "why you should get a hobby". In my experience a degree can get you into a company at junior level, especially if you have nothing else to show for.
It is the skills from practising, or in your case, your Unity game and your portfolio of work, that will provide better opportunities for a job. And it is the skills after you get into a job, which determines your future/wages/promotions, not a degree.

Since you already started on your own game, you have a foundation to build your value on, not just with animation, but also Leadership, PR, Coding, Shipping a product.
As Robert Kiyosaki would say, it is better to know a little about everything than knowing everything about 1 thing.

Oh god. I remember putting this mod on watch list back when I was still in high school. Now I'm 27. Somehow that hit me real hard. I'm surprised someone is still working on it. Pretty much every mod from that time is dead and never finished or released in the first place. Oh wow. Good luck, man.

Same, which is also why Joshua and I will make a final attempt at completing it. It will be out this year.

Out of all half life mods, this is the last thing i expected but you know what? I can now safely say half life has a mod for everything.

The really cool part about HL, is that it is like a game engine, but with a lot of pre-fabricated stuff. And it is fairly uncomplex when it comes to level editing.
However working from an FPS template, it ofcourse has it own set of cons and challenges that needs to be recoded. Another issue is the age of the engine.

For the code part I would say the biggest issue is to find a sense of order in that mess they made.

New deadlines are in the work, an update can be expected soon.

Back on track. I just moved to a new city and recently got the normal routine going again.

Currently working on the combo design for Ichigo.

Hey man, im hyped for this mod and I am wondering if you're doing ok since we haven't heard from you for a while.

We are alive, but to be honest it has been difficult to find surplus time for spare projects this year. The change in my environment (job, house, gas furnace -> heat pump renovation) has left me with less energy than I anticipated.

I am not satisfied with the effort that I have committed this year, and I have considered if we should aim towards releasing bzsmod as it is now with the worst bugs being fixed.
That is something I have yet to discuss with Angel and Joshua.

Instead of working on the combos for Ichigo, I will attempt to complete the blocking feature; I believe it to be a good place to start.

I'm glad you're alive, your life comes first before this mod and I respect the fact you still work on the mod despite the lack of time to work on it.