Long Ago, Etheria was once a land of living legends… Throughout the ages, brave warriors across the realm stood together against the forces of evil, led by immortal beings known as the Old Ones… After a titanic struggle, these champions locked away the power of the Old Ones, inside Eternia Crystals… These legendary heroes have recently left their younger kin in charge of the common castle chores… Bored with their dreary duties, the inexperienced pupils decide to play… And accidentally unleash an ancient force that has long been dormant!

Dungeon Defenders is an original hybrid of two hot genres: Tower Defense and cooperative online Action-RPG! The game puts players in the role of one of four distinctive hero classes, tasked with fending off hordes of invading beasties by strategically summoning a variety of Defenses & Traps throughout their castle. But as much more than just a strategy game, players directly participate in the action-packed combat with their hero characters, while upgrading their statistics, gathering tons of loot and inventory items, customizing & upgrading equipment, and developing unique class abilities. All of this can be enjoyed in seamless online and split-screen local multiplayer, as players cooperate and compete through the story campaign and challenge missions to build the strongest heroes and achieve the highest scores in the kingdom.

Combining the depth of strategic gaming with the satisfying action of RPG character building, in a beautifully stylized ‘toon fantasy setting, Dungeon Defenders is designed to be a distinctly addictive, easy-to-play experience for casual and hardcore gamers alike!

The May Hurray Bundle!

The Indie Royale game bundle site is in full bloom with its May Hurray Bundle, offering five fantastic independent games available at a bargain, fluctuating price. 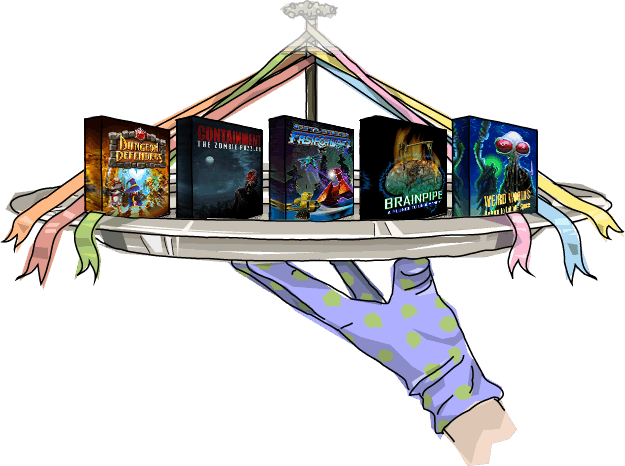 Headlining the bundle is Trendy Entertainment's addictive tower defense RPG Dungeon Defenders, available for Windows and Mac on Steam, Desura and DRM-free. The game puts players in the role of one of four distinctive hero classes, tasked with fending off hordes of invading beasties by strategically summoning a variety of defenses & traps throughout their castle. Rock, Paper, Shotgun called it, "A superb thing: gloriously colourful, robustly made, filled with tonnes of loot and skills and towers." All of this can be enjoyed in seamless online and split-screen local multiplayer. Combining the depth of strategic gaming with the satisfying action of RPG character building, in a beautifully stylized ‘toon fantasy setting, Dungeon Defenders is designed to be a distinctly addictive, easy-to-play experience for casual and hardcore gamers alike!

Next up is Boot Snake Games' radical puzzle title Containment: The Zombie Puzzler, available for Windows on Steam, Desura and DRM-free. Featuring multiple types of units, items, zombies, and bosses, this is not your typical puzzle game. Experience the branching campaign and survival mode, with integrated leaderboards so you can make sure that your past glories are more glorious than your friends’.

Last up are two more indie favorites from the wizards of weird, Digital Eel. First, fight the system as you plunge down a continuously twisting and turning three dimensional retro wireframe landscape in Data Jammers: Fast Forward, available for Windows on Steam, Desura and DRM-free. Rock, Paper, Shotgun called Data Jammers, "Reminiscent of all that is good in the world. Or at least some of the things that are good in the world, like Tempest and speeding through cyberspace." Rounding out the bundle is the otherworldly mind control device, masquerading as a seemingly quaint computer game, Brainpipe: A Plunge to Unhumanity, available for Windows and Mac for Steam, Desura and DRM-free.

Finally, those who support the independent developers by paying $7 USD or their currency equivalent during the May Hurray Bundle get Starscream's acclaimed 'Future, Toward the Edge of Forever' music album (a $5 value from the NYC chiptune futurists now known as Infinity Shred).

Coming out tomorrow on Steam (console news below), our third Shards is shaping up to be our best Shards release yet! But as you stand before the Great...

And just like that, PAX East is over. We hope everyone who came out to the booth had a fantastic time! Seeing our fans tackle the new content was a blast...

An ancient evil has been unleashed on the land of Etheria and it’s up to you to defend it in this online (and offline) action RPG!

Unfortunately this version just seems to be spam for the steam version, you don't and cannot, get any of the DLC, don't be fooled by the "get" buttons on characters etc - it just sends you to steam purchase pages.
When asked about updates on the developers forum they said they would update at some point.

No you cannot play with steam users, even if they set the game to gamespy mode because of the version difference.

If you own the steam version and dlc, there is no way to get the DLC you have paid for into this version.

This is a cut down version of the game, enjoyable in of itself but limited so much you might as well pay for it on steam so you can get the dlc etc.

Then you've got a problem with your computer.

if you contact us, we are able to get you a Steam key for your purchase.

Can users of the desura version and the steam version of this game play an online game together?

Very fun game to play with friends. The item collection and leveling process add layers of replayability to keep the gameplay fresh for multiple playthroughs.