The world’s most open and advanced real-time 3D creation tool, Unreal Engine 5 will be available in preview in early 2021, and in full release late in 2021, supporting next-generation consoles, current-generation consoles, Windows, Mac, iOS, and Android. Its novelties are Nanite and Lumen system.

Nanite virtualized geometry means that film-quality source art comprising hundreds of millions or billions of polygons can be imported directly into Unreal Engine — anything from ZBrush sculpts to photogrammetry scans to CAD data — and it just works. Nanite geometry is streamed and scaled in real time so there are no more polygon count budgets, polygon memory budgets, or draw count budgets; there is no need to bake details to normal maps or manually author LODs; and there is no loss in quality.

Lumen is a fully dynamic global illumination solution that immediately reacts to scene and light changes. The system renders diffuse interreflection with infinite bounces and indirect specular reflections in huge, detailed environments, at scales ranging from kilometers to millimeters.

Welcome back Adventurers to another Dev Diary for ManneKin: Hessler Storage!

I've been hard at work this last week trying to get things ready for an alpha demo release and the good news is I'm getting closer, but more on that later.

I've taken to fleshing out the demo level by adding new decals that should help guide you through the level, but also add some life to the area as the contractors left and you have ventured into Hessler Storage after hours.

You'll be armed with your trusty lighter, Dr Shaw swears it's never run out on him. 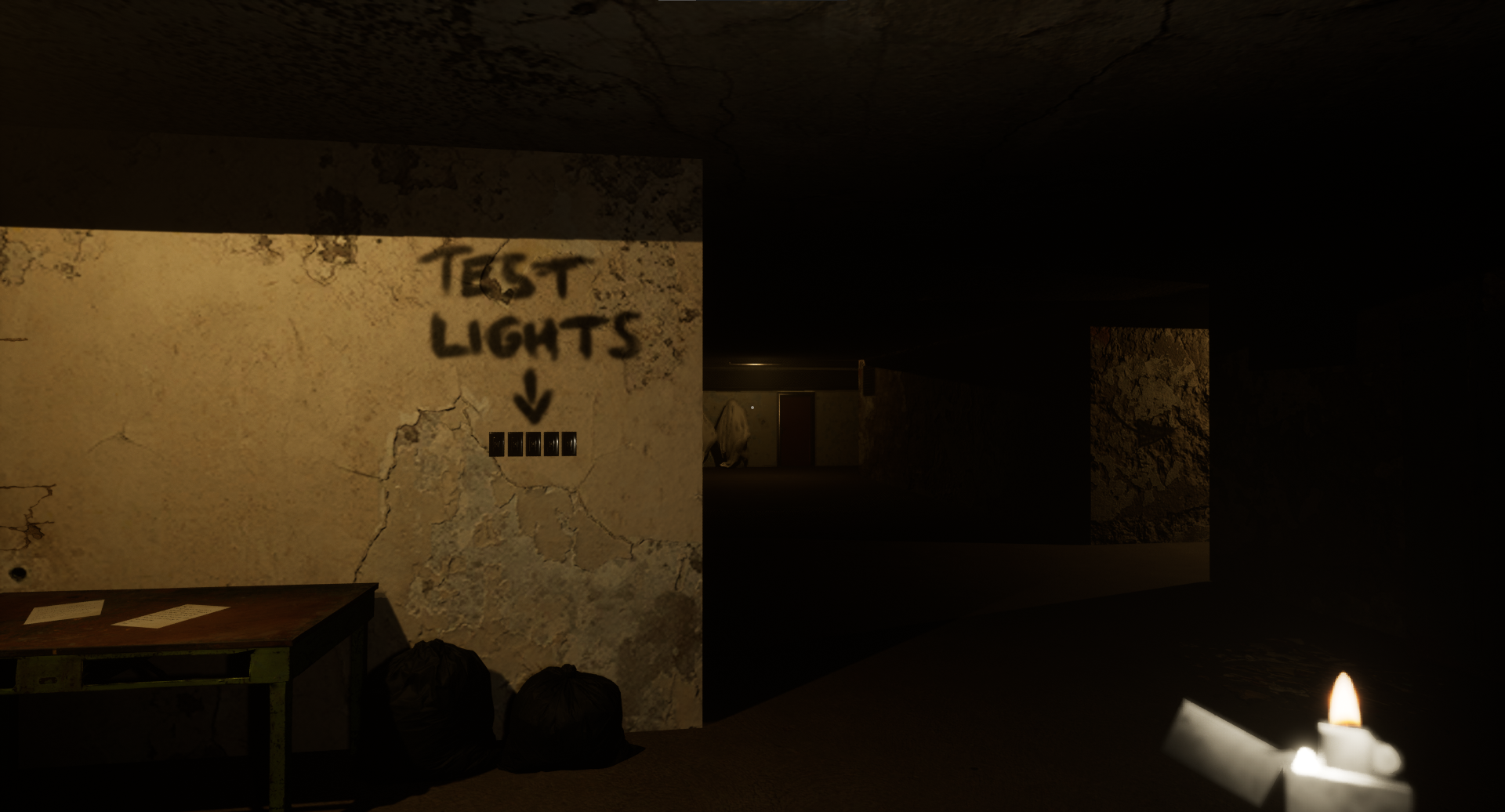 As I spoke about in a previous dev diary, there'll be ways for you to find out about the history of Hessler Storage and the events that unfolded here. One of those ways is through audio recordings. Audio recorders can be found throughout the level, some hidden, some not. 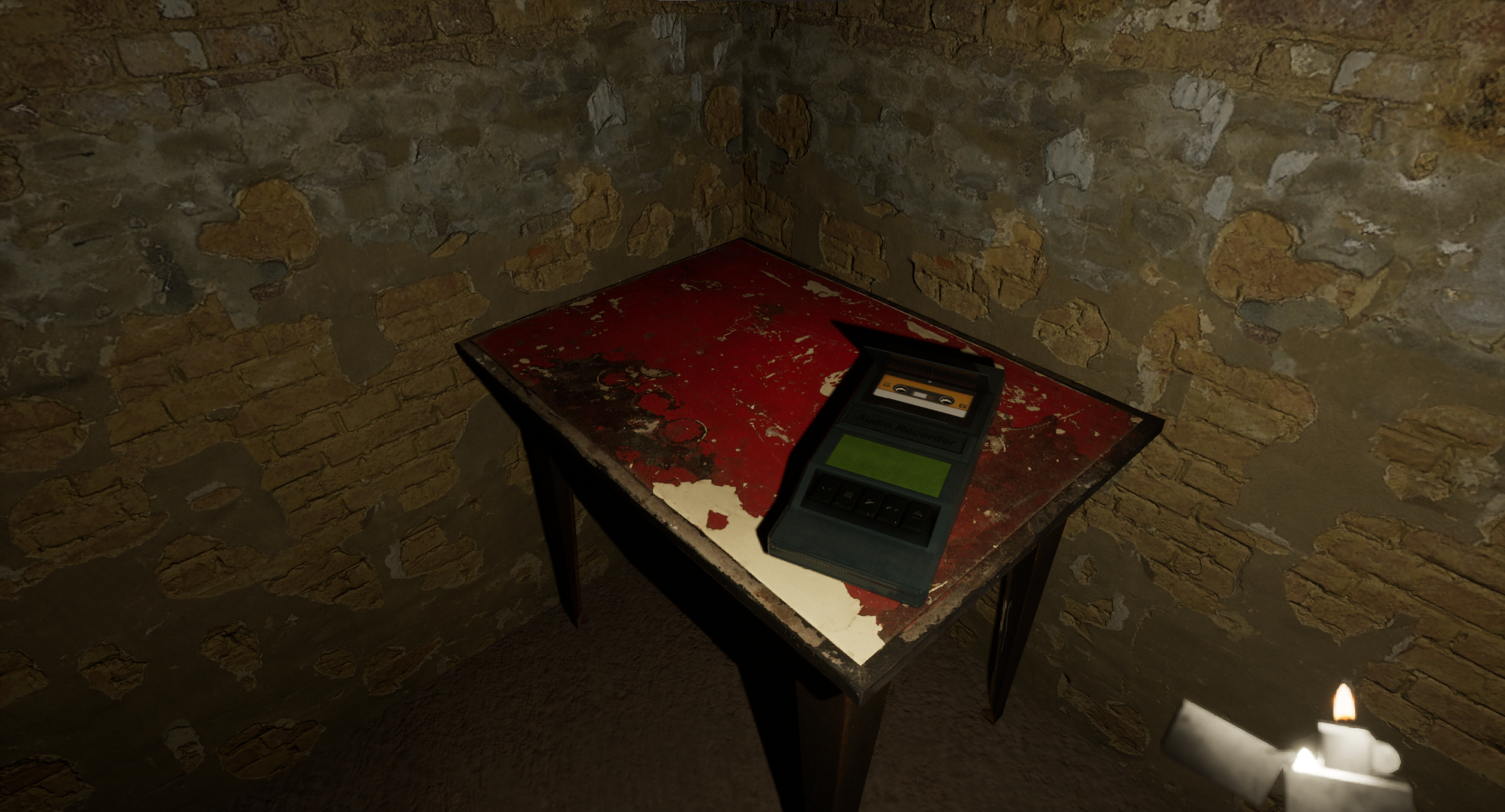 Rooms that have significance will be labelled, as there isn't a map of Hessler Storage, the contractors working in the building had to spray what the room is used for next to the door. Not every room will have its name sprayed next to it, but every room has one. Whether it's storing the weird mannequins or the odd mirrors. 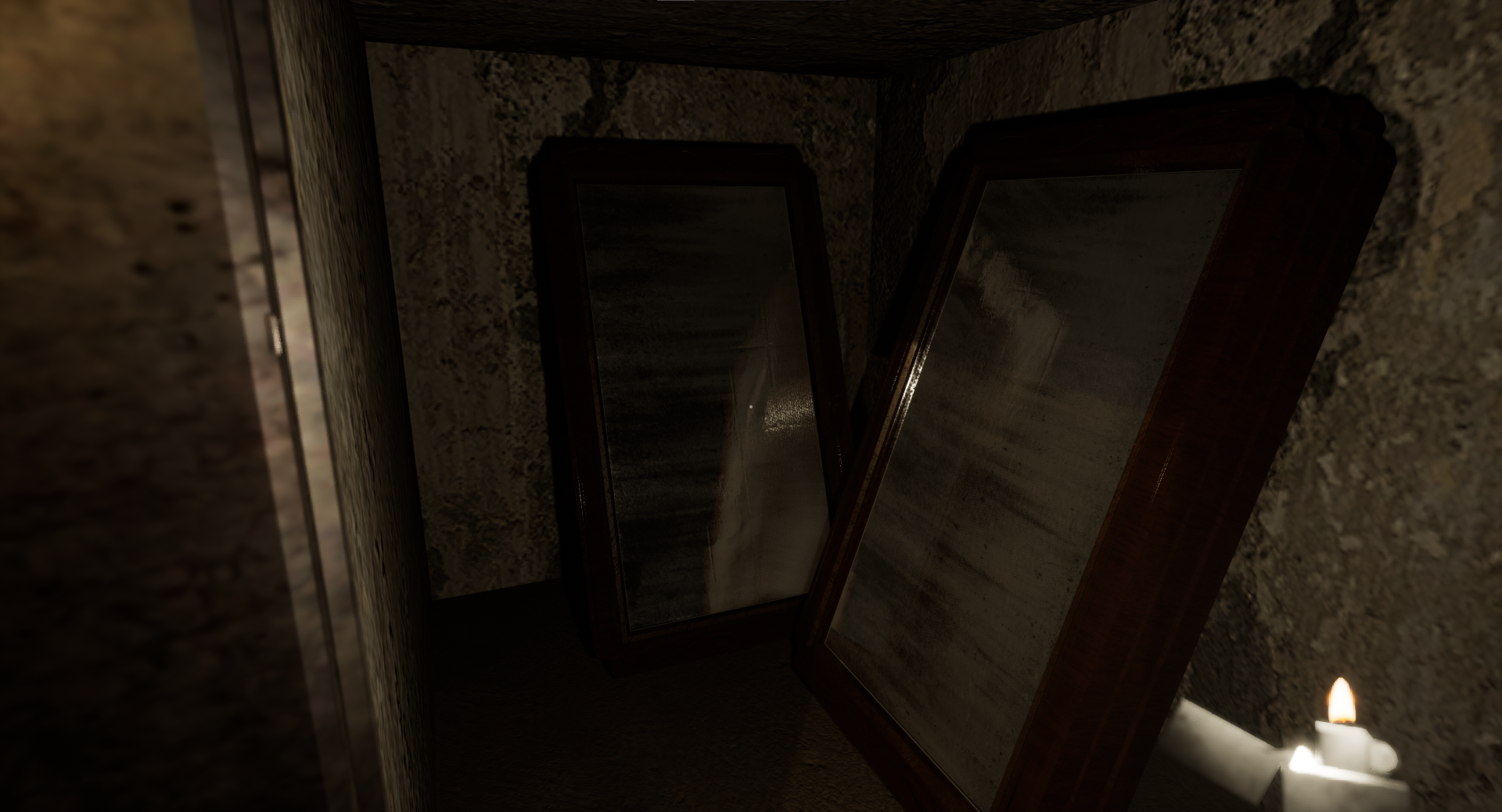 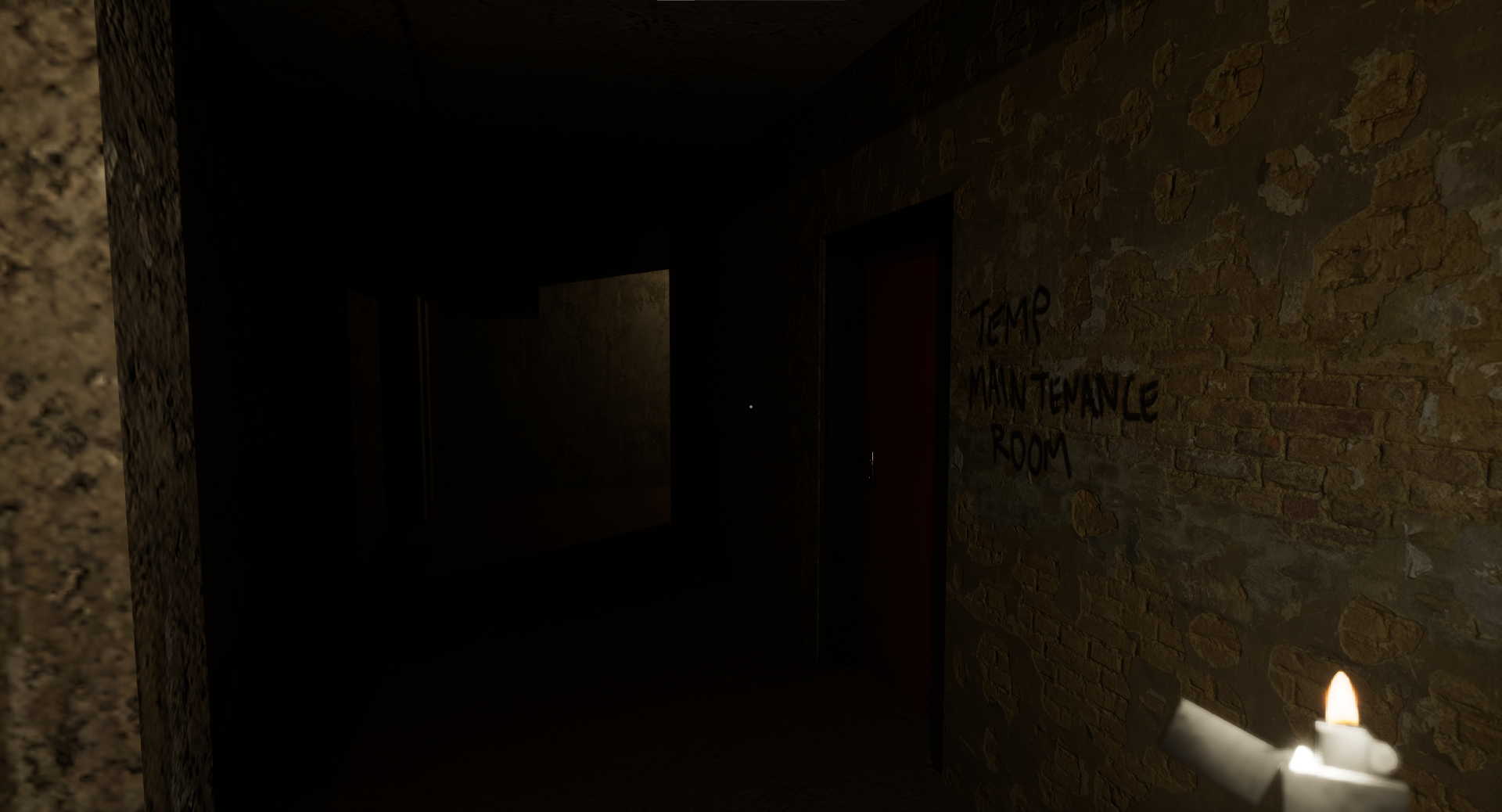 As with all the rooms having a purpose, some of them will be locked. The crew of contractors are quite protective of their tools, so it only makes sense that they use keys to keep them safe when they've left the building for the night, to help with key storage I've put a keyholder in the maintenance room. 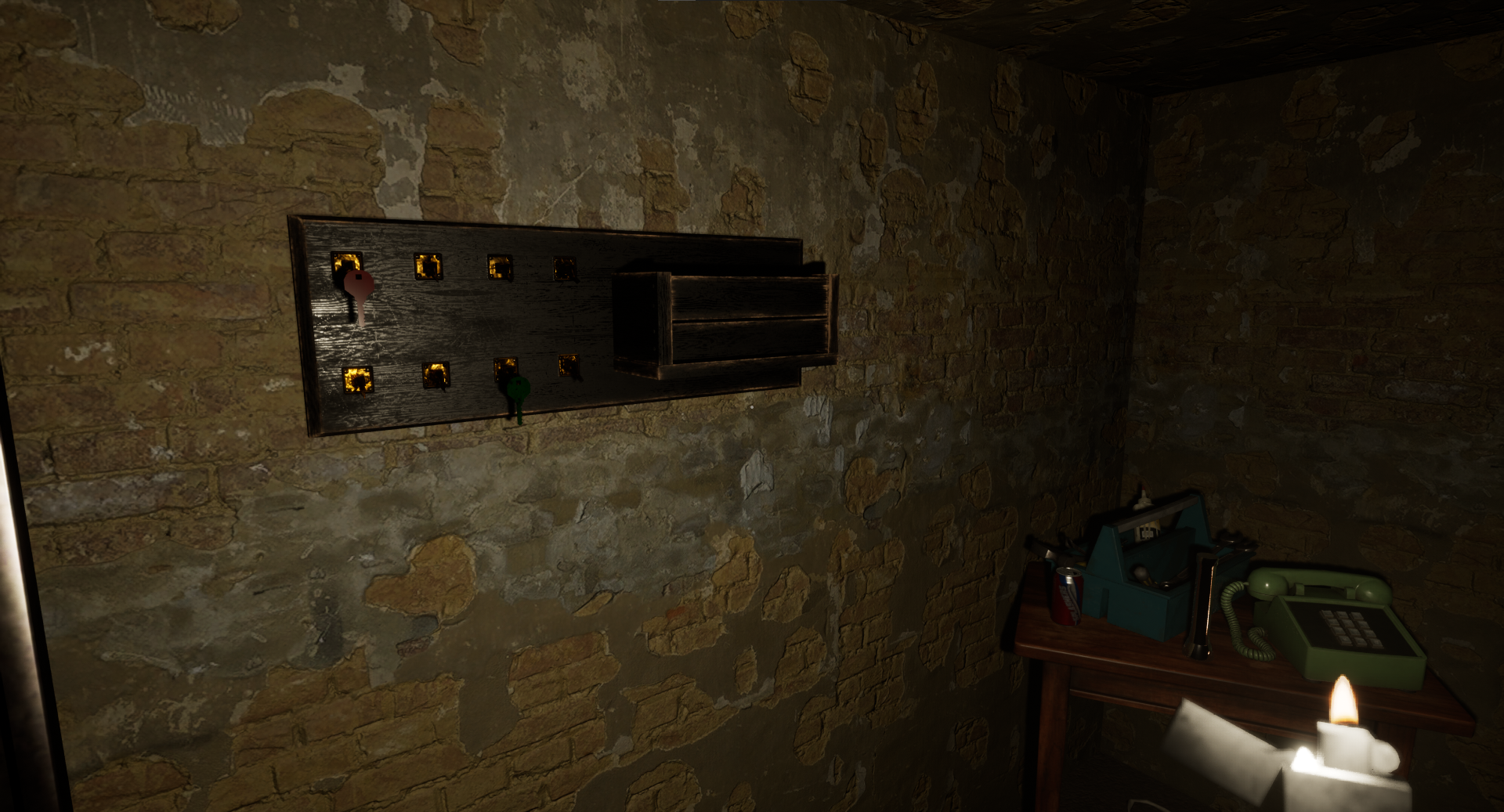 And as for the atmosphere, I just don't think I had enough mannequins in the demo. So I'm in the process of adding more. I apologise in advance and I hope you get along with them, they're so dying to meet you. 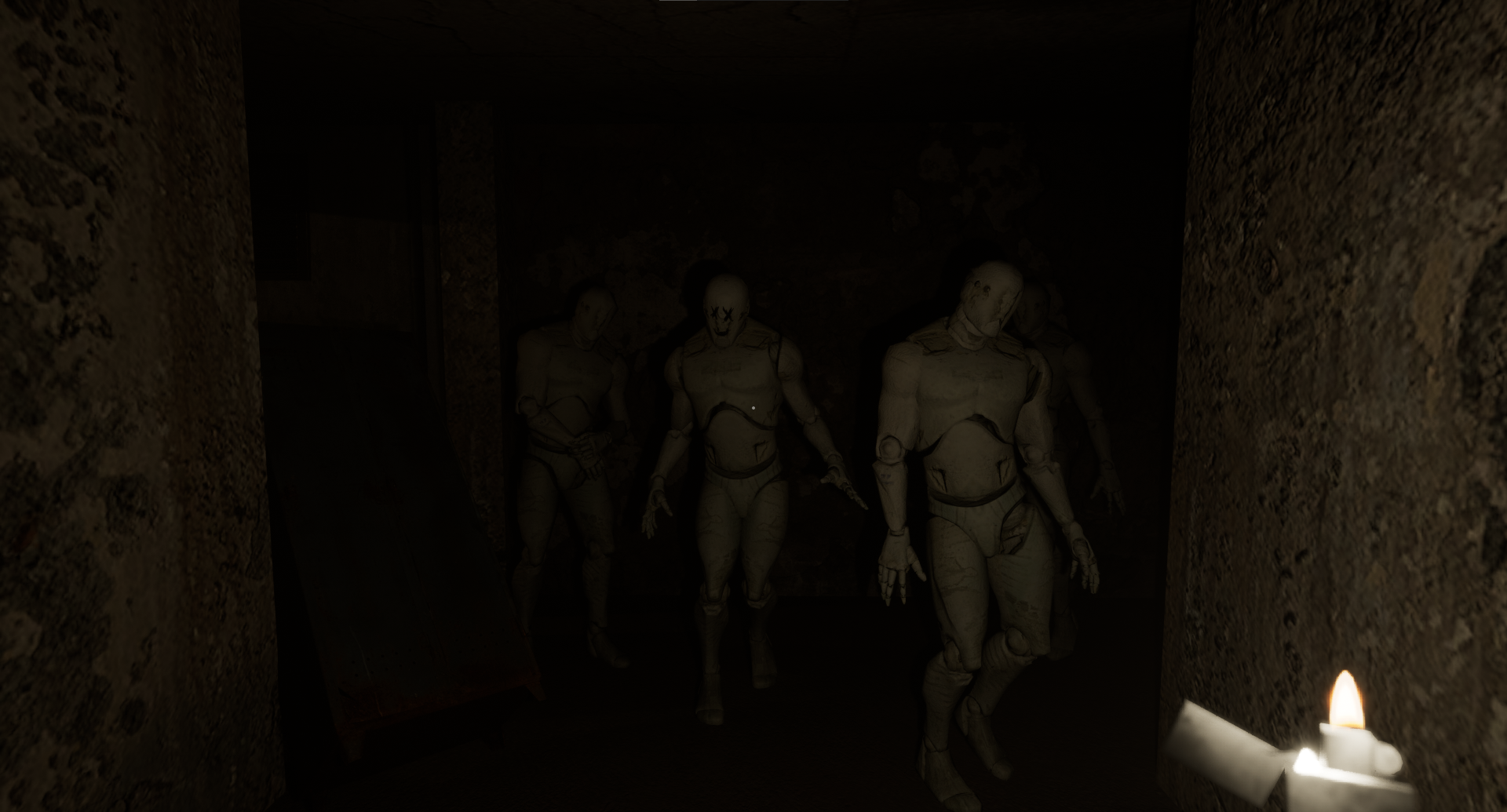 And since you've made it to the end of this latest dev diary, I do have more news about the demo! I'm looking to have it out in September or sooner! This will be an alpha demo, so you'll have to excuse the unpolished version you'll be getting. I'll be looking for feedback for the alpha demo, so keep an eye out! You can keep up to date with me on Twitter and keep an eye out on itch.io/ManneKin for the demo!

In the meantime, you can join the Discord community!

An in-game capture of the new Starjump HUD in development.

It’s a fantasy game based on Getae history and their legends/myths. For now, here’s a little snippet of what’s to come

Continuing with the planets refresh, I've been refining the system that generates Earthlike worlds...

Building levels and crafting the lore around ManneKin has been a fun task so far. So we're releasing new screenshots from the alpha build of ManneKin...

Path of Titans is an MMO dinosaur video game being developed for home computers and mobile devices. Play as one of 10 core dinosaurs in a rich ecosystem...

A single-player starship colony simulator game with RPG elements, set in a vast galaxy waiting to be explored!

Pyramis is a brand new H.R Giger & Alien-inspired survival horror game, that will bring back the genre to its roots and modernize it in the process. The...

MonsterCare is a management-simulation game, in which the player oversees a shelter for neglected and homeless monsters. Starting from a single room in...

Professor Shaw is called to check a strange symbol discovered during renovations of a storage facility. Discover the horror as you descend deeper to uncover...

Doomga's Corridor is back! This time Doomga is not here anymore and you have to deal with his ghosts! Your objective is to find out what hides in the...

Outer Heaven is a Metal Gear(MSX) remake with Unreal Engine 5, you will play all original storyline with detailed scenes, details, and places. The gameplay...

You are a human assistance robot in the future that came online accidently through shipping damage. Although, you're not broken, you've become sentient...

I'm waiting for it to make my own game. Making assets and planning for it.

lol waiting for gears 6 using this engine, there will be no unreal tournament 5 at all

It seems quite promising. This engine has enormous potential. It's definitely immersive and realistic.

I have longed for a third installment in the KotOR series and it would be a dream come true if they made it using this software, but it's only wishful thinking. To be honest, I'd love to see another Witch-er video game, because this franchise has limitless potential and relatable characters. And I've seen the Witch-er III launch cinematic numerous times and that's what I wish to see in a sequel.

I honestly think that games have a bright future. And new game engines will merge with reality to some extent someday. I'm glad that visuals will be so realistic now and that they'll encroach/border on reality in the near future. So excited.

Mod SDK & Community
Built a game for Unreal Engine 5 and want to support mods? Try mod.io, a cross-platform mod SDK created by Mod DB which makes it easy to get a mod community up and running in-game. Currently seeking games to integrate and promote