The Quake engine is the game engine that was written to power 1996's Quake, written by id Software. It featured true 3D realtime rendering and is now licensed under the GPL.

After release it immediately forked, as did the level design. Much of the engine remained in Quake II and Quake III Arena. The Quake engine, like the Doom engine, used Binary space partitioning (BSP). The Quake engine also used Gouraud shading for moving objects, and a static lightmap for nonmoving objects.

Well, the earlier simple graphics style + realtime light + 256 palette didn't quite fit togther, result was jagged color bands everywhere. So kind of back to previous style, but with some normal maps. Have again updated the weapons a bit, took some of the old ones and did some new ones too. There's also a Scale4X shader, so the low res textures look a bit smoother, while also staying sharp looking.

The game now has options to choose from English or Finnish subtitles/messages, might add Swedish later. Player character is also talking both English and Finnish, and maybe later some Swedish. I have studied German too, but I might have forgotten too much of it to make a sensible translation? There's some little issues with ÄÖÅ characters and the text: the fonts that could print them, can't use the Scale4X shader, only the engine default font seems to be able use the shader. At least the default font looks fitting with the other HUD graphics.

Tested gameplay with locked doors needing a certain amount of keys to unlock. Of course I cut the parts where player unlocks/opens the locked doors. So far it seems like it could allow player to play the levels a little less linear than with color coded locked doors. Now the only color coding is if the door is locked or unlocked. Could add some signs near the doors.

As mentioned earlier, the weapons changed again, now thought to let them be as they are and focus on level design. The weapon functionality is going to stay mostly what you might have seen already. For a moment tested if every weapon had it's own ammo type, but maybe it's more fun if it's just 4 collectible ammo types, maybe max 6 if absolutely necessary to add some more. Current 4th ammo type is Fuel, but could be Energy Cells, Compressed Hydrogen or something like that (something that can power a Plasmagun and a Flamethrower). 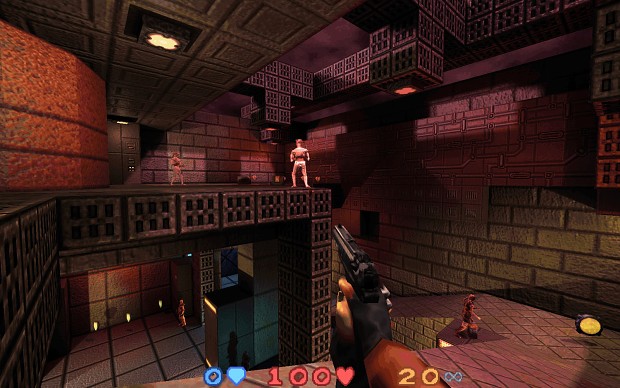 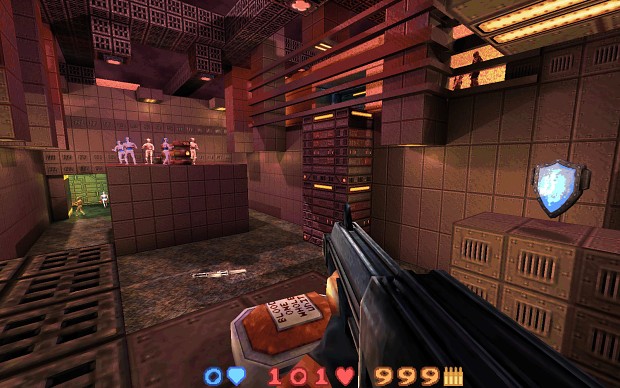 Yea, the brown metal texture is very much Doom inspired. 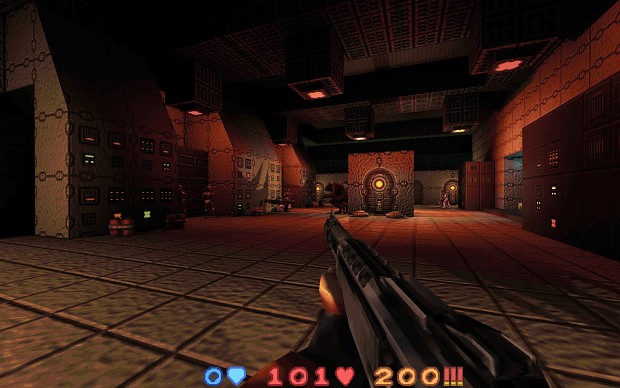 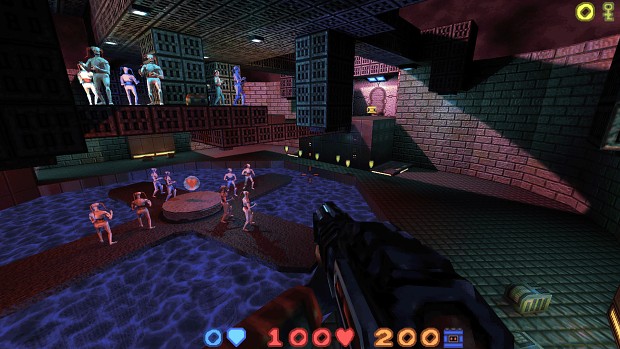 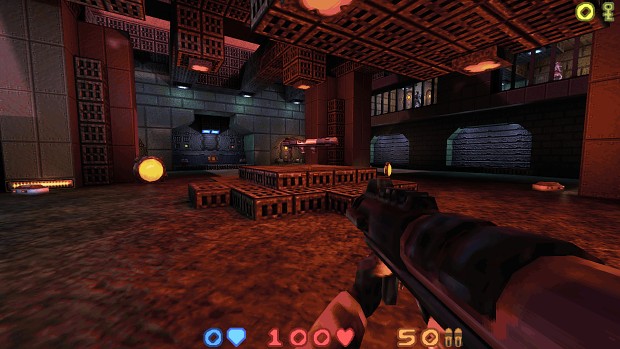 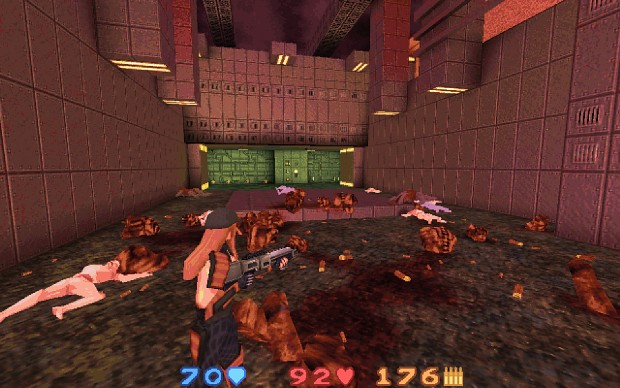 Different level themes, city, hell, graveyard, definitely something less scifi looking? Video with playing with a controller and showing off the aim assistance. Have also wondered that now that the palette is in a glsl shader, it doesn't really need to be Quake palette compatible, could redesign it a bit sometime (textures with fullbrights can be done with _glow textures and function with any color). Maybe re record some of the newer player character voices, my throat was a bit hoarse and couldn't get the same voice as before.

Going through a bloody gantlet and some artstyle changes.

A video from a level called Vengeful Entry, which could be the first level of the game.

You really cannot blame me, keeping moddb in touch can really be a pain. lets catch u all up xoxo.

Demonstration video of some of the weapons in a small open level called Oil and Brimstone.

First person action fantasy horror with retro graphics. You're a demoness in Hell in a conquest for power over your rivals. The game runs on FTE engine.

Rage through 32 single player levels and 6 deathmatch levels of sheer terror and fully immersive sound and lighting. Arm yourself against the cannibalistic...

You are Outlander. Once adrift upon the Ageless Sea, you now find yourself on the shores of a dying world. From the consuming darkness emerges a figure...

One of the most highly anticipated releases of 1997, HeXen II was the first game from an outside developer to ship with Quake engine technology. The game...

Solitude (Working Title) is a PSP and PC game using a heavily modified Quake engine, expanding upon the story of Halo: Combat Evolved. Expect a great...

the group of the game, which was broken, but I fixed it now, YAS I think I fixed it >:( why did I have to make another group >:(

Forgive us, Lisa.... There's a monster in all of us.. Lost souls may be gone, but the nightmare, lives on. Built from the Ground up on a heavily modified...

Purge is an updated version of the same developer's Future vs. Fantasy mod for Quake, first released in 1996. It had a game mode named "Purge" and involved...

>you can only make standalone games with this when owning "Quake" by id Software.

Not true. The "Quake Engine" source has been released under the GPL.

What this really meant to say was if you make a quake one mod that references or uses quake one media (textures, compiled maps, models or sounds) the recipient must own quake one. In other words, you are not licensed to re-distribute iD software proprietary media with your releases.

You could easily make a stand-alone (GPL, free, or even commercial) game as long as you re-release the modified engine code under the GPL, *AND* make (or license) all your own models, maps, sounds and textures.

The restriction would be that you could not use any quake one: textures, compiled maps, models or sounds.

The quake one map sources have also been released, but I'm not sure under what license.

This is a complete GPL release that you could use to build a GPL game with no restrictions on licensed content.

What you need this to play NZP or what????
plz help

Note to all: THe Quake Engine was just the Doom Engine (also used in the two earlier games, Wolfenstien and Catacomb (which came first), but with 3D Models and Mouse Look, two things that the Doom Engine did not have.

The Quake engine is NOT Doom engine with a few new features, Everything in Quake engine is new (relative to Doom). It is possible that a few lines are straight from Doom Engine. Also, Wolfenstien 3D and Catacomb 3D are not on Doom engine, their engine functionality is much lower, all the lighting had to be the same, all rooms were square, and, in the case of Catacomb 3D I believe it did not have a 256-color palette. Adding mouselook to Doom would cause strange texture mapping on most objects, and adding 3D models to the Doom renderer would be very hard, and, in most cases, wouldn't look as good as Quake.

First of all, you can only make standalone games with this when owning "Quake" by id Software.

The SourceCode can be find here: Gamers.org
The sourcecode is the engine, the executable file (.exe).

The gamecode is written in the language "QuakeC", a selfmade language by id Software which is C like. Quaketastic.com

If you are new to Quake modding, visit this site: Inside3d.com

Notes:
All qc compiler errors are fixed in these sets. They are ready for modding.

Painkeep 2.2 includes visible weapons support for the standard quake 1 weapons and painkeep items, frikbots and pk*bots. You will need painkeep 2.0 for all the models: Moddb.com (follow instructions included to install this mod) If you are going to base a mod on painkeep 2.0, you pretty much have to get the full install.

If you use the hipnotic Quake-C and dont have the mission pack "Scourge of Armagon" - Amazon.com - installed, you will not be able to use any hipnotic item. You wont have the models.

For help with Quake-C coding try this resource: .qc - Moddb.com
Feel free to post questions on the comment board or in the forum: hard_code() Moddb.com

Mod SDK & Community
Built a game for Quake Engine and want to support mods? Try mod.io, a cross-platform mod SDK created by Mod DB which makes it easy to get a mod community up and running in-game. Currently seeking games to integrate and promote