The 2020 Mod of the Year awards is heating up and now heading into phase 2: voting for the winners from the Top 100 mods nominated from 2020.

The 2020 Mod of the Year Awards has concluded the first round of voting, and after 10 days and nearly 40,000 votes being tallied and 4,382 mods in the running, the final Top 100 nominees have been revealed!

Phase 2 has begun, in which voting is now open for the Top 100 mods to determine 2020's ultimate winner. You have until December 21 to cast your votes! 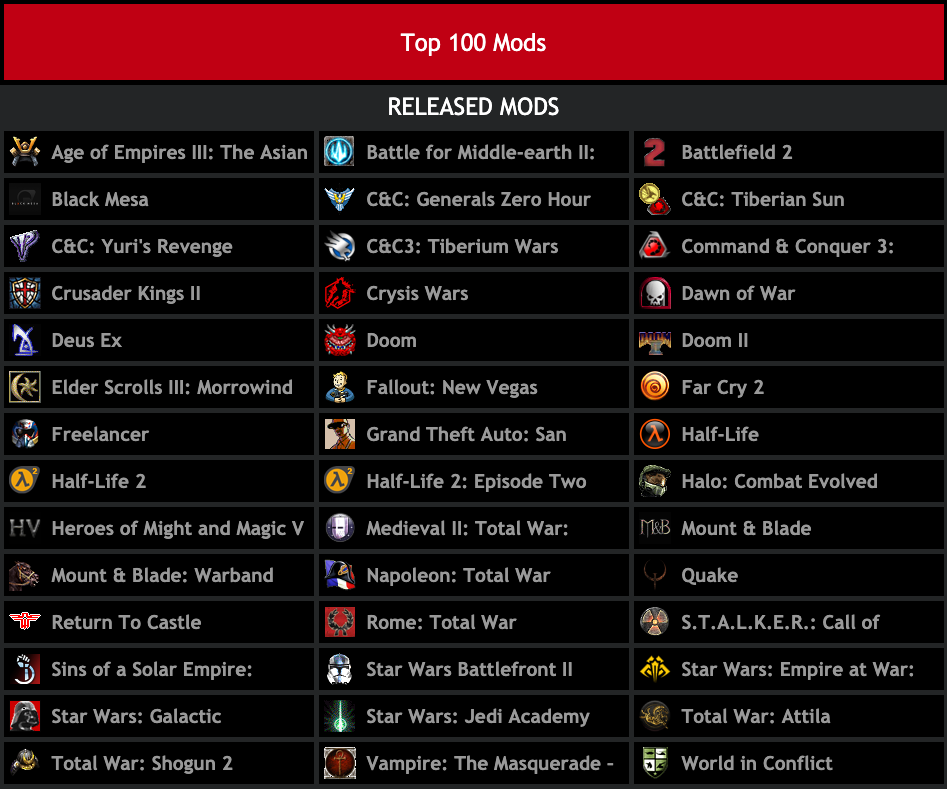 It's been an incredible year for mods with some of the highlights including Age of the Ring, Crysis Enhanced Edition, BannerPage and Farewell of the White Wolf. While mod-friendly games such as S.T.A.L.K.E.R.: Call of Pripyat, Star Wars Battlefront II, Star Wars: Empire at War: Forces of Corruption and Mount & Blade: Warband were some of the highest represented this year. Despite newer triple-A titles restricting access to mods and user-created content, the modding scene is still alive and well as these nominees clearly show.

Congratulations to all the modders whose projects made it into the 2020 Mod of the Year Top 100 . Now is the time to rally your community to support to secure votes and spread the word about your mod far and wide. Be sure to continue updating your community about future releases, developments, screenshots, and videos of in-progress work. Congratulations also to those mods who didn't make the Top 100, but came incredibly close and put a huge amount of work into their fantastic mods throughout 2020.

Thanks everyone who voted for Battlefront 2 Remaster <3

I would have favoured if everyone would have gotten only one vote in the final round. That would prevent that snowball effect which we have had in the last year.

I'm so grateful for everyone who voted for Dark Matter, it really means a lot to me! Thank you all so much!

May the best of us win!!

Warsword Conquest for the win.

Where is Arx-Insanity on this list? Pedro Ordaz made one gigantic hell of a mod For Arx Fatalis. That is a god damn shame. . .