The Worry of Newport 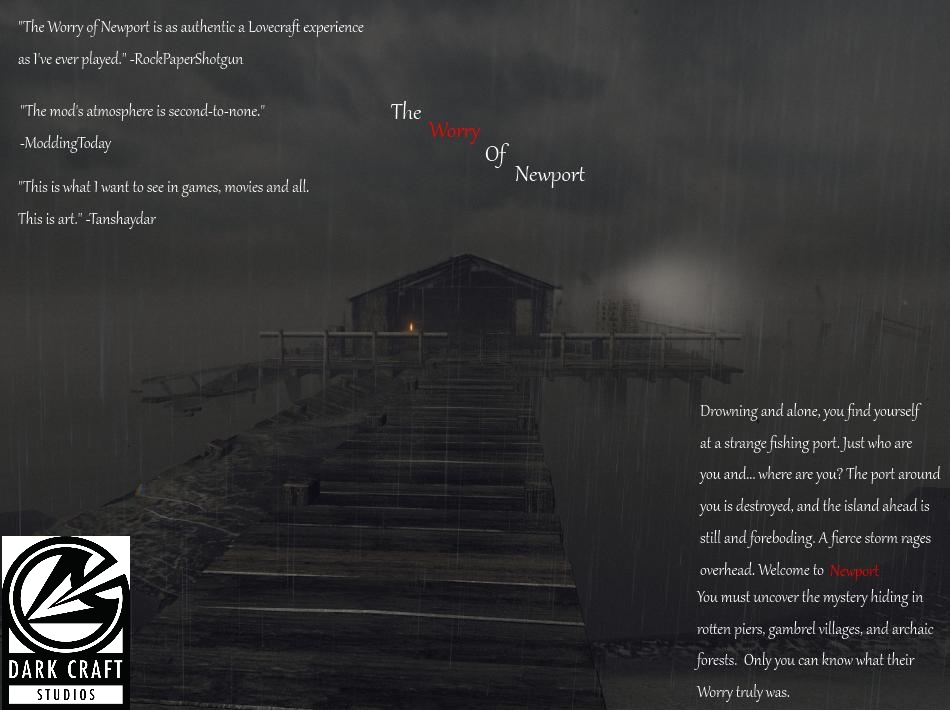 The Worry of Newport is a two part horror/mystery mod for Crysis built around immersion and story telling, rather than combat or action. Both parts span a story arc that concerns a nameless protagonist awakening in the ocean outside of the island of Newport, a fictional colony in the Atlantic. Upon exploring the port nearby and uncovering a little bit of the backstory, it is on his (and your, the players) shoulders to presue the truths behind the dark secrets on the island. Sacrifices, ancient rites, deities of long past within the ocean, and surviving the very creatures that doomed the island are all on the player's plate. Finding out who Edgar Gray is and what has he done is the leading mystery, as well as your own past and truths to face. Just what was the Worry of Newport?

Worry of Newport is a playable horror/mystery story with no combat, a few puzzles, but mostly exploring, reading, and listening and observing through some truly detailed and atmospheric setpieces. I need to stress that this is still a unique take on gaming and is more of a playable conventional story rather than a horror "game". There is no stealth, no monsters, no combat.

Interaction is not limited however. Exploration and book reading is key, and the devil is in the details. There are scenes to "survive", a puzzle here and there, and some engaging moments. It is not limited to walking in a straight line listening.

I didn't expect myself to be posting here again so soon, but -- hello everyone, C-zom here to bring you bilateral news of pure excellence. Though, I should begin by stipulating that, indeed, the Developer Commentary was cancelled officially and will not return due to poor reception and low view counts. What was begged of us practically by the community for almost a year straight landed to ice cold reception, and there won't be another crack at it. Now, onto the important bits:

What is first and foremost is the discussion of a hotfix patch upcoming for The Worry of Newport, to be released by March 1st or earlier (guaranteed this time, no if's ends or buts.) Hotfix-#1 will address the following issues,


The Worry of Newport is going to get a AAA prequel at long last. I will be writing it once again, I am unsure if Jason Daysh will return to direct our cutscenes, but I hope to secure the original cast and crew entirely. Preliminary talks have not gone into motion. Rather, I've secured the confidence in Cryengine3 to begin private build development and conceptual solidification. I have also begun the screenplay and storyboard.

The prequel is designed to deal with the explorations of Aoife Hall in Europe, the Middle East, and eventually to Newport itself, before culminating in a visitation to an ancient city housing a cosmic horror -- Tygras. Fans of The Worry of Newport will be familiar with this all by playing it and reading the journals and logs. The context, and hook, of the game is a first person adventure (I stress adventure) in Lovecraftian Mystery, whereupon she delves deep into a profound mystery surrounding that city, as well as the whereabouts and identity of a cosmic horror named Hadad. She meets Edgar Gray at a focal point of the story and each character is dedicated to leap-frog patterned chapters in the game.

It is going to ramp down on the dreadful, horror, and misanthropic atmosphere of the first and present itself as an actual spanning adventure with quests, npc's, and the like. But it won't be without it's Lovecraftian influences or horrifying atmosphere, of course. Promising a full suite of characters, locations, DX11 graphics, and custom assets and top grade voice acting and composing, it should be the prequel Newport deserves. Expect a Moddb page to be opened up shortly after Summer begins. Tell the living, tell the dead; The Worry of Newport's long awaited "successor" has begun development.

The Worry of Newport -- Developer Playthrough

A look at the first official developer commentary and playthrough of TWON, by Dark Craft Studios.

The Worry of Newport - Final Released!

The final patch for Worry of Newport is released, closing the door on this tremendous mod and its extraordinary long life cycle.

The final change log for the final Newport patch, including a release date.

A look at an upcoming update for Worry of Newport which is due in a months time.

The Worry of Newport - Final

The Worry of Newport Final. Both editions patched to their maximum threshold, complete with a new custom UI, loading screens, loading animations, cutscenes...

The Worry of Newport - Complete

The Worry of Newport is a two part Horror/Mystery built upon Crysis 1. It is an interactive narrative and story built upon the first person perspective...

The Worry of Newport is a two part Horror/Mystery built upon Crysis 1. It is an interactive narrative and story built upon the first person perspective...

The Worry of Newport Part 1 - Remake

The Worry of Newport - Part 1 is an interactive narrative for Crysis located in the Horror-Mystery genre. It removes the hud, combat, puzzles, nanosuit...

I can't get this to work with the GOG version.
I followed the steps in the txt file under "Playing Instructions".
Also looked at the img file. I did have to create a folder called Mods. When I am in Crysis I click mods and it shows the mod there I click load and the game restarts but I'm back at square one, back in crysis click on mod tab click on mod load restarts then back in crysis. The mod never actually loads.

The only thing I can't do is add -mod Newport2 since the GOG version uses a launcher. I took a look at the crysis.exe file but there's no shortcut tab to it.

I also checked the GOG forums but no one mentions how to get mods to work.

You'll need to do the "-mod Newport2" method for GOG. It's pretty easy though. You need to go to the root Crysis folder the GOG installer made, right click the Crysis.exe (Its in either bin32 or bin64) and then make a shortcut for it to your desktop, /then/ apply the shortcut hook as laid out in the install instructions.

Anon here, but after nearly 9 years I am playing this again. I still think Crysis is the most moddable game and I hope it gets popular again so mods like this can be made.

I am unable to play this game. It load fine, but when I start a new game, it reaches 100% loaded, and then crashes. My Crysis is up to date. I may have a graphics mod installed--would this be causing an issue?

That would be the issue! Newport has its own optimizations and graphical filters enabled, it is not compatible with any other Crysis mods at the same time.

I did a complete reinstall of Crysis, and I am now able to play the game! I will note that the menu that existed before reinstalling Crysis is gone, and I must run the command at the regular menu to play the game. Amazing work!

I am aware of the black book page bug and audio balance bug, now. Do you guys confirm that they exist? Can anyone read the book pages as the mod intends?

I know it took me nine thousand years but I fixed the install instructions for you cool cats. Hopefully easier to play now, if anyone even does! :fire:

Single Player
Twitter
Tags
Embed Buttons
Link to The Worry of Newport by selecting a button and using the embed code provided more...