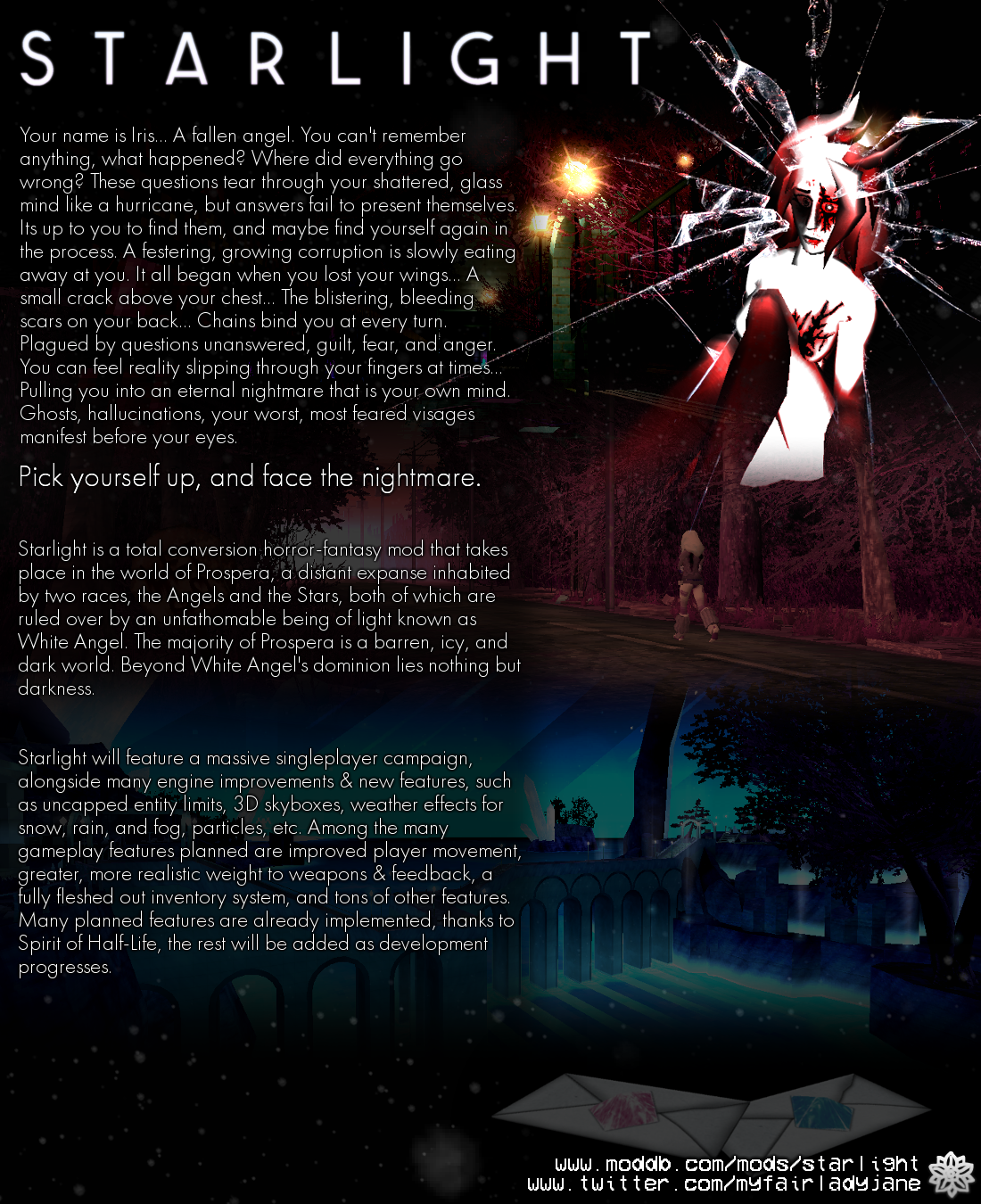 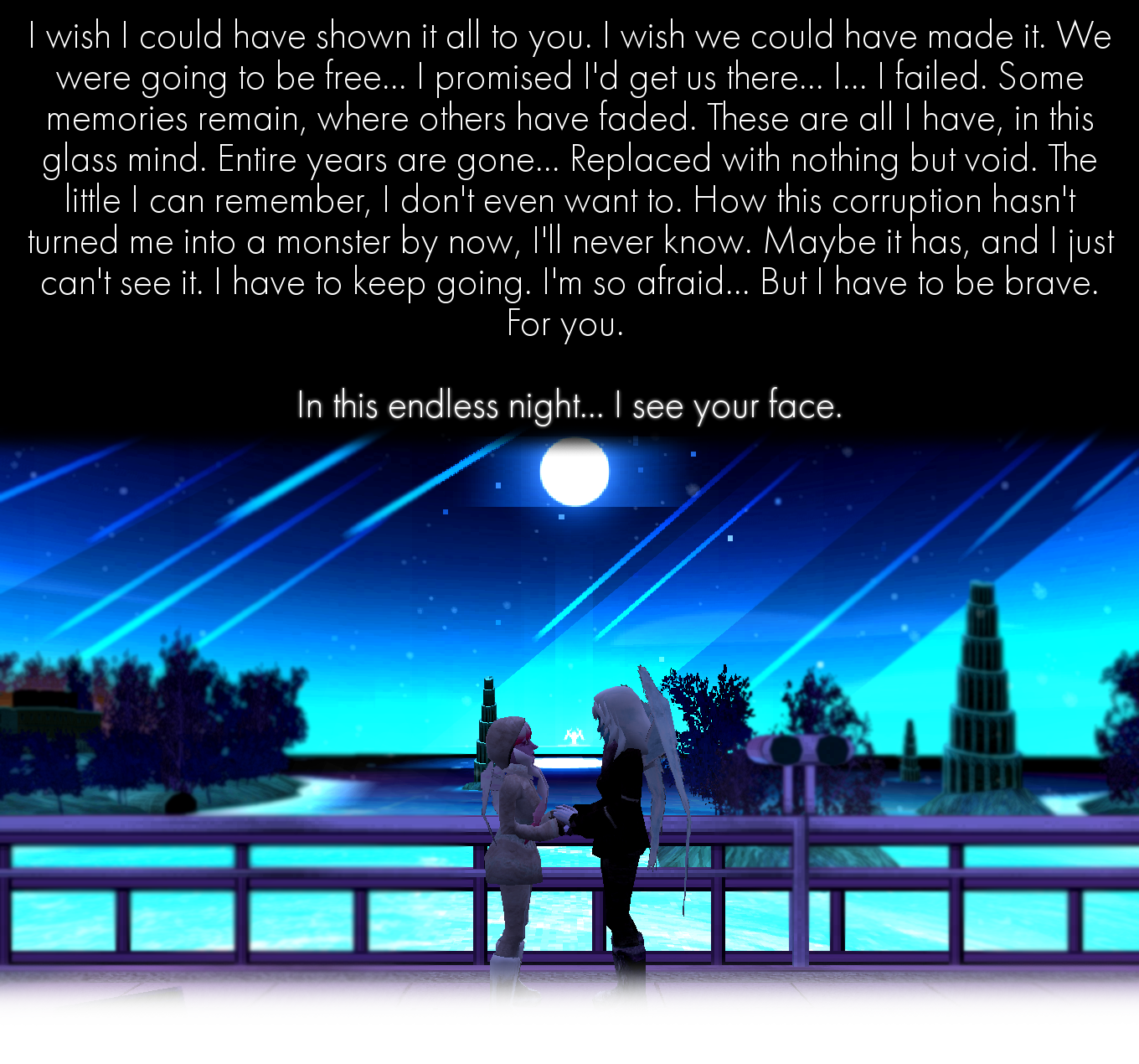 I figured it was time for a new trailer. This brand-spanking new trailer should serve as a replacement for the now EXTREMELY outdated "Spiraling Down" trailer from 2018. I'd like to thank Gmadador for doing an absolutely wonderful job animating the scene at the end, I simply couldn't have done it without her help.

Since the previous article, quite alot has happened. Throughout 2020, this absolute waking nightmare of a year, I've been focusing on overhauling older maps, getting them up to the standard that the newer maps have established, further fleshing out gameplay in more completed maps, fine tuning weapons, items, enemies, overall balance and SO much more. Theres a balance that I'm trying to strike, and I'm doing everything I can to make sure every single level the game has to offer is fun to play, fun to explore, and fun to look at. I want every level to have something to remember in it, a constant atmosphere.

The development & refinement of a single level can span years.

A level always has to be as fun to play as it is the look at. One level that more than matches that criteria that I'd like to start us off with, is the waterfall. One of the oldest maps still in use in the project to this day, it began in October of 2017, and was one of the very first maps I created during the Homeworld prototype phase of Starlight's development. Over the years, its been through more iterations than I can remember. Thankfully, I've documented most of the major changes through screenshots, you can see the evolution of it beneath the video below, and screenshots showing what it currently looks like!

"The bridge across the waterfall is the final unsealed roadway out of Crossing, and serves as the primary access point leading into Starview Gardens, a massive, sprawling district park & forest reservation. Prior to the evacuation, Starview was a popular tourist attraction, if not for its many historic monuments & locales, its unique starscapes at night were a more than worthy reason to pay it a visit. Even in it's now derelict, beyond recovery post-evacuation condition, there isn't any denying that view." 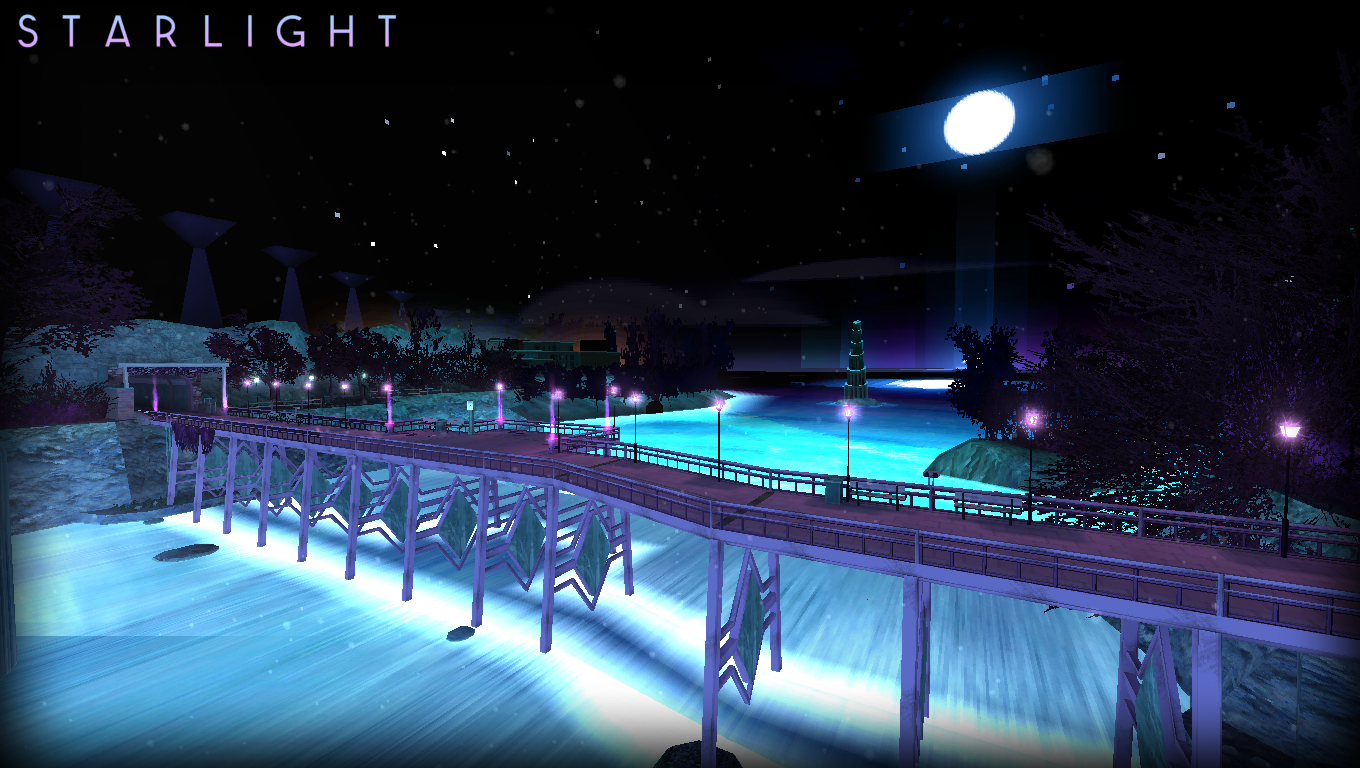 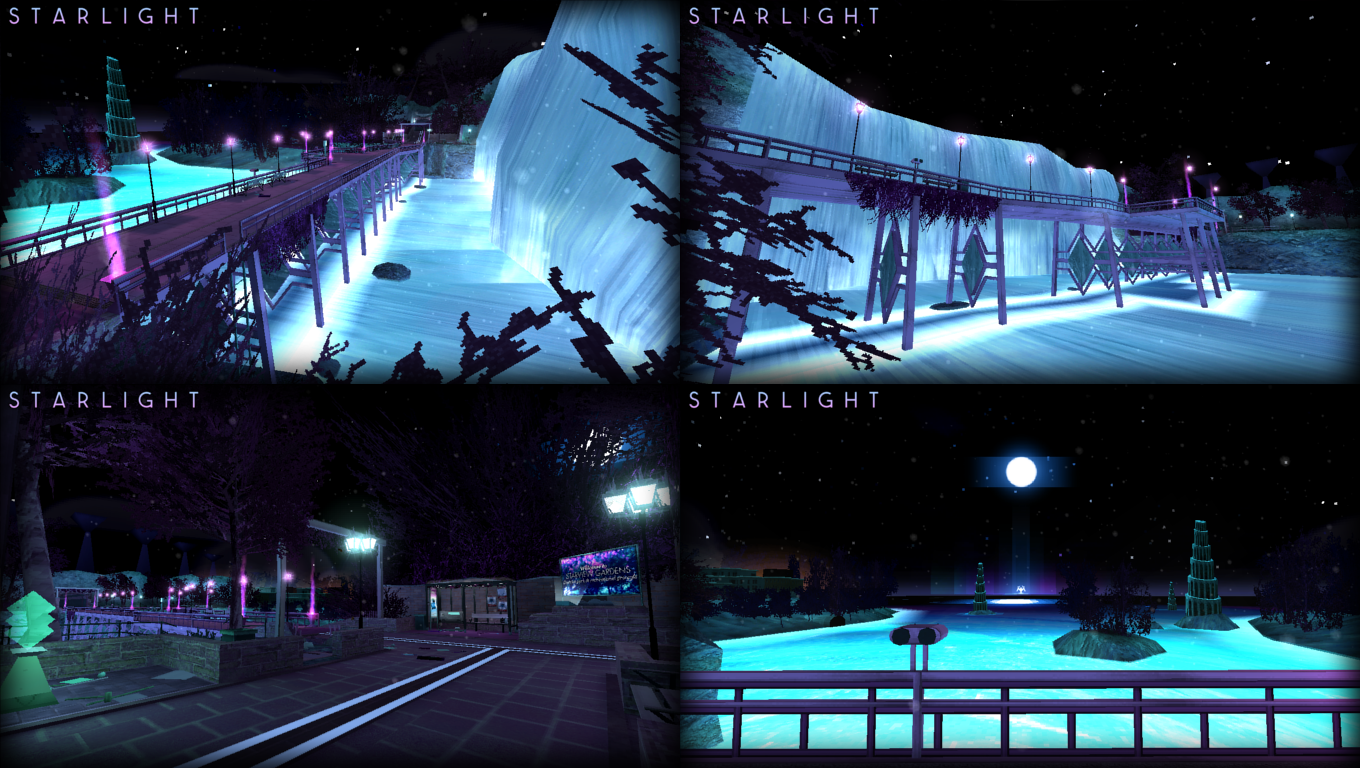 I won't lie, there are more maps than I can remember currently laying on the cutting room floor, but somehow this one has managed to dodge it for the entire time this project has been in development. One of the first maps ever properly created back in 2017 during the Homeworld era, as with the majority of the original Starview levels, this map was crucial in establishing the sense of scale I wanted to try & pull off with the levels, and a test to see if the engine would allow it to become a reality. Somehow, it worked, and set the bar early on for just how massive some of Starlight's setpieces would become. 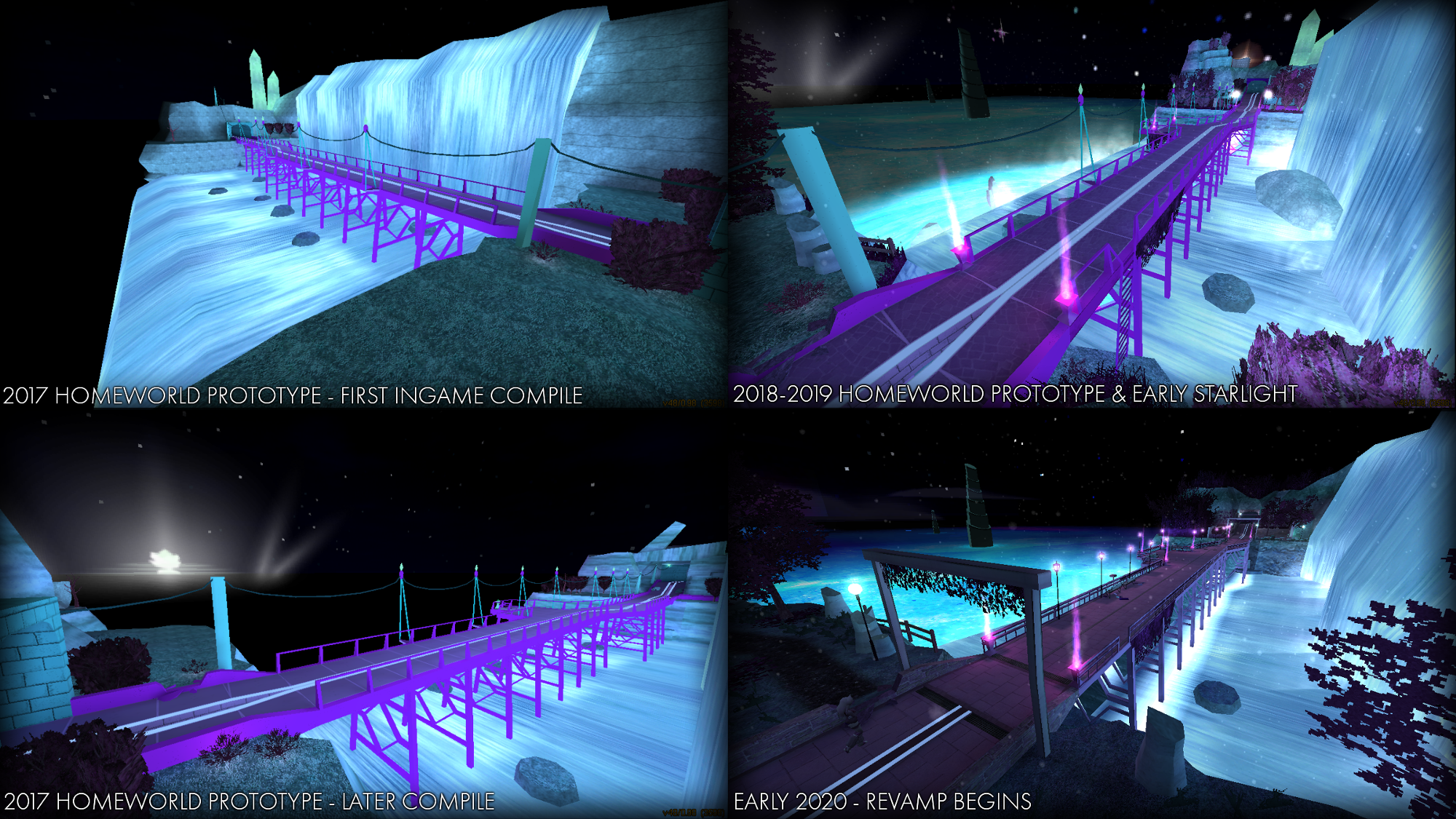 There have also been countless new levels created since the year began. The over 3 years I've spent creating assets for the project is paying off heavily, I'm able to mix & match & create new areas extremely fast, while providing each map a sufficient level of distinction & detail. In the span of about 2 & a half weeks, I created the map featured in the video below earlier in the year, and finished it off earlier this month.

"The Crossing-Starview Domesting Warp Station is the only actively maintained access point into & out of the Starview-Crossing sector. A skeleton crew from the capital clocks in during the early hours of the morning to maintain & oversee the final warp pad resting on a small island just off the coast. That's your ticket out of this complete & utter deathtrap of a sector." 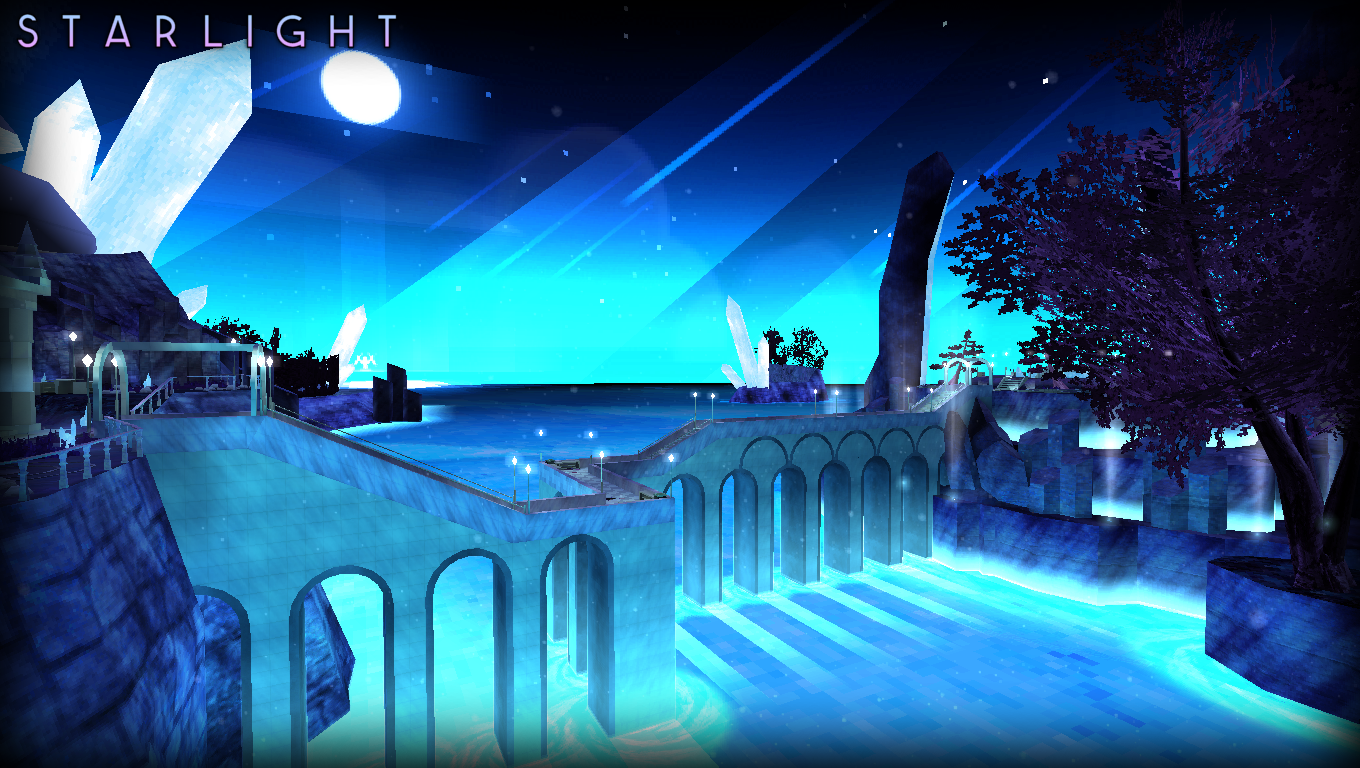 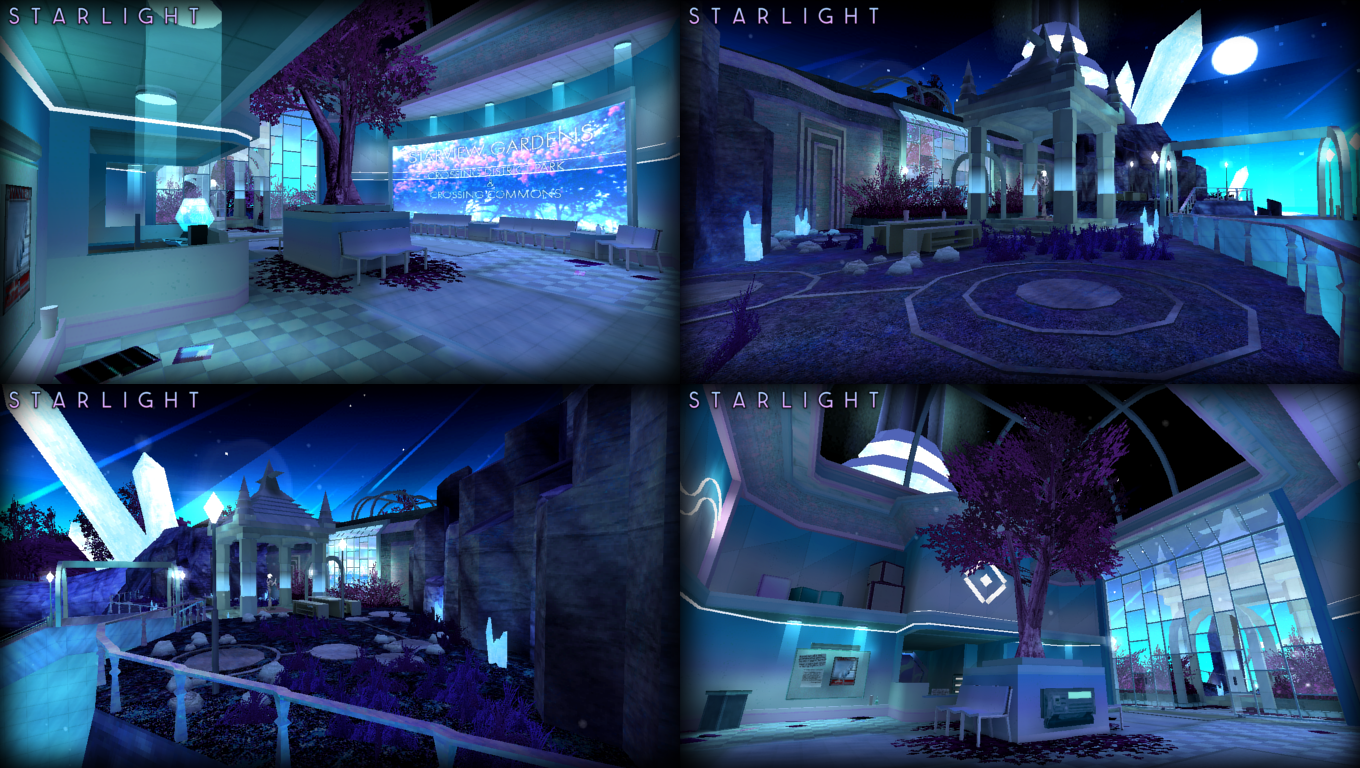 Older maps have been getting a much needed facelift. For example, this is how the park featured in last year's article looks now, more than doubled in size & detail from its previous iteration.

All maps have a bar that I've set for them to meet in terms of detail, this certainly isn't the only map I've given this treatment to, but that's all I'm willing to spoil currently. Onto models and gameplay improvements!

Gameplay wise, gunplay has been tweaked HEAVILY. Weapons have much greater weight to them & every shot you take will have considerable knockback. You'll have to strategize & place your shots very carefully to preserve precious ammunition & survive enemy encounters. Iris isn't some trained tactical assassin or super soldier wearing fridge-tier power armor, and how she handles weapons will reflect this.

Model wise, I've gone through & updated every weapon viewmodel to reflect how they handle ingame much more accurately. Theres also been quite a few new weapons added aswell, one of which is the heavy pistol, and I'm pleased to say that MTB Animations has came through for me once again this year! Thanks to his animations, & my friend Badis for being a real trooper & implementing all the code needed for this weapon, its fully functional, and very, very satisfying to use ingame. 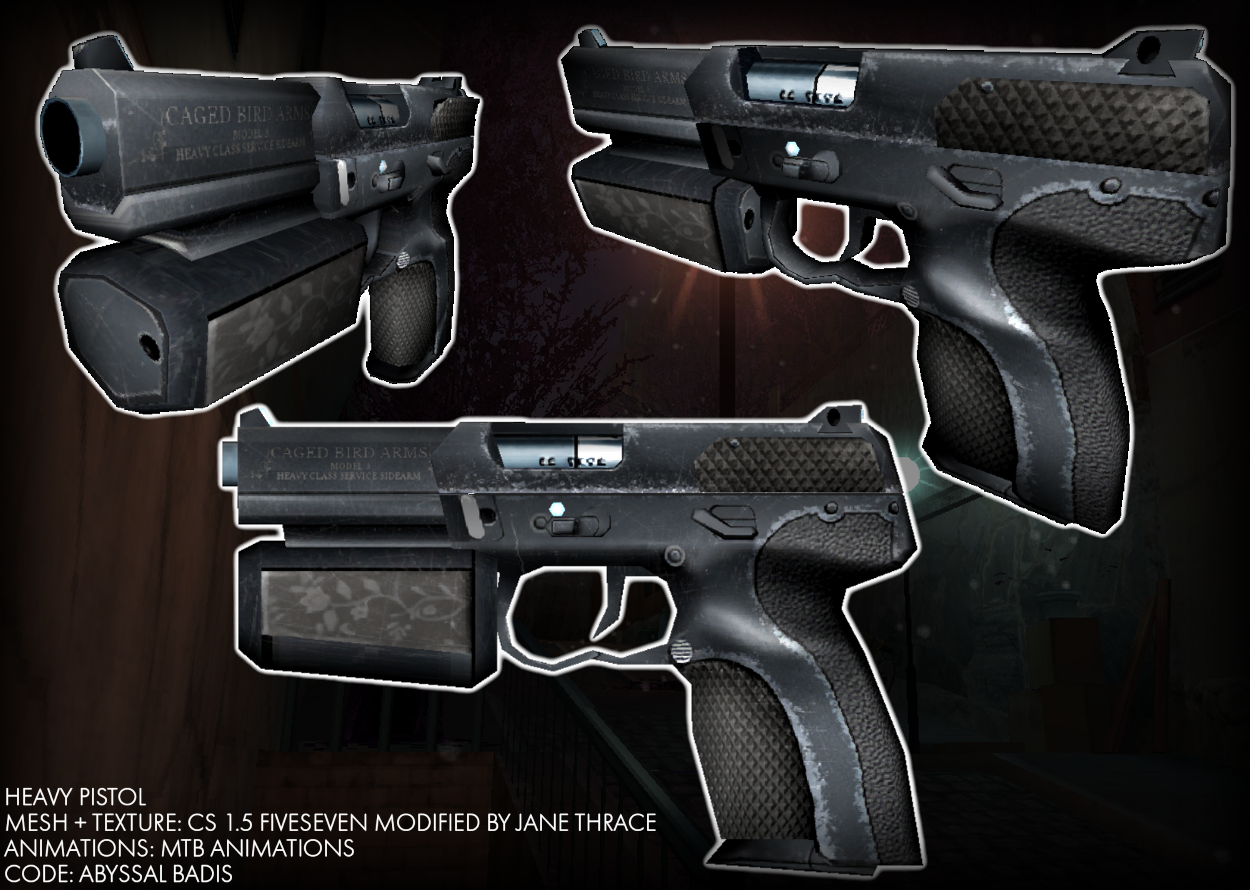 Enemy variety has also been increased substantially. There are now over 20 different variants of the standard fallen angel enemy & countless new abominations you'll be having to fight your way through. 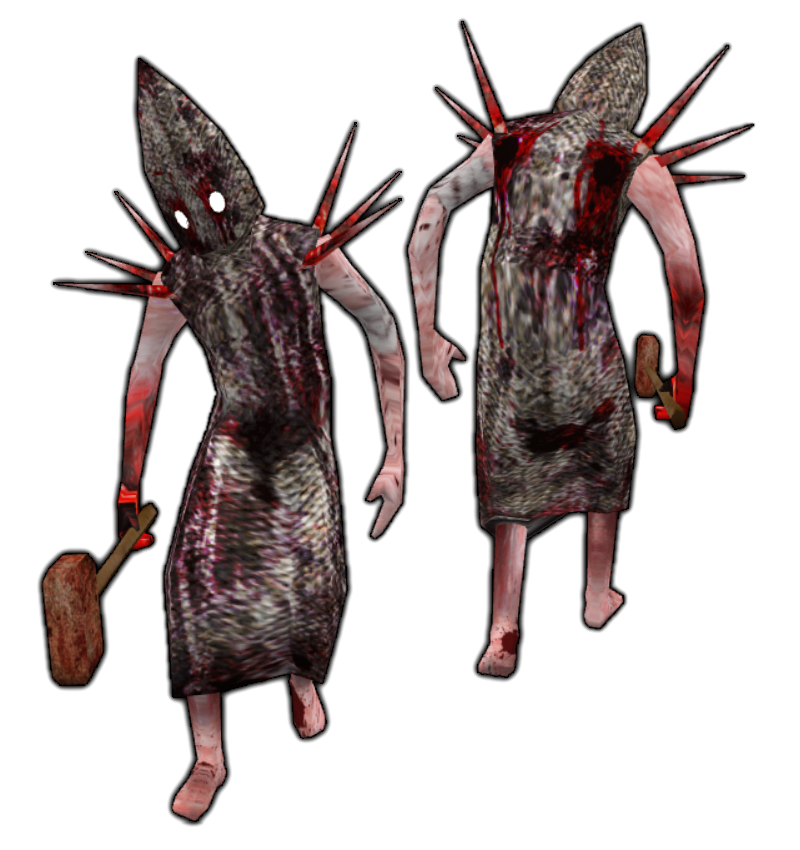 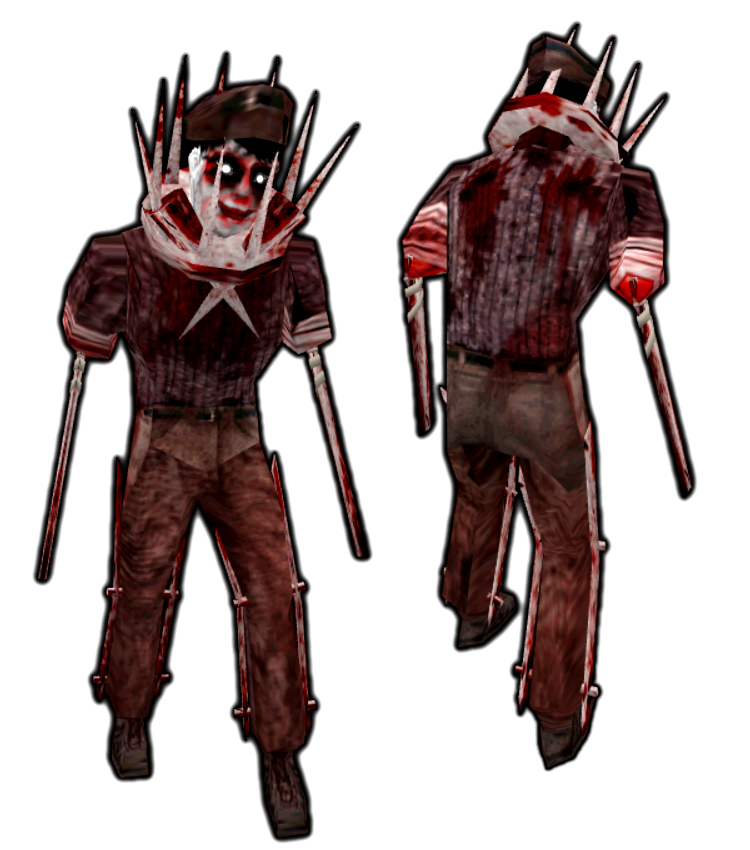 And of course, I wouldn't just tease these models without giving everyone a proper look at them. Here are renders for Iris & Mira both in their past incarnations. 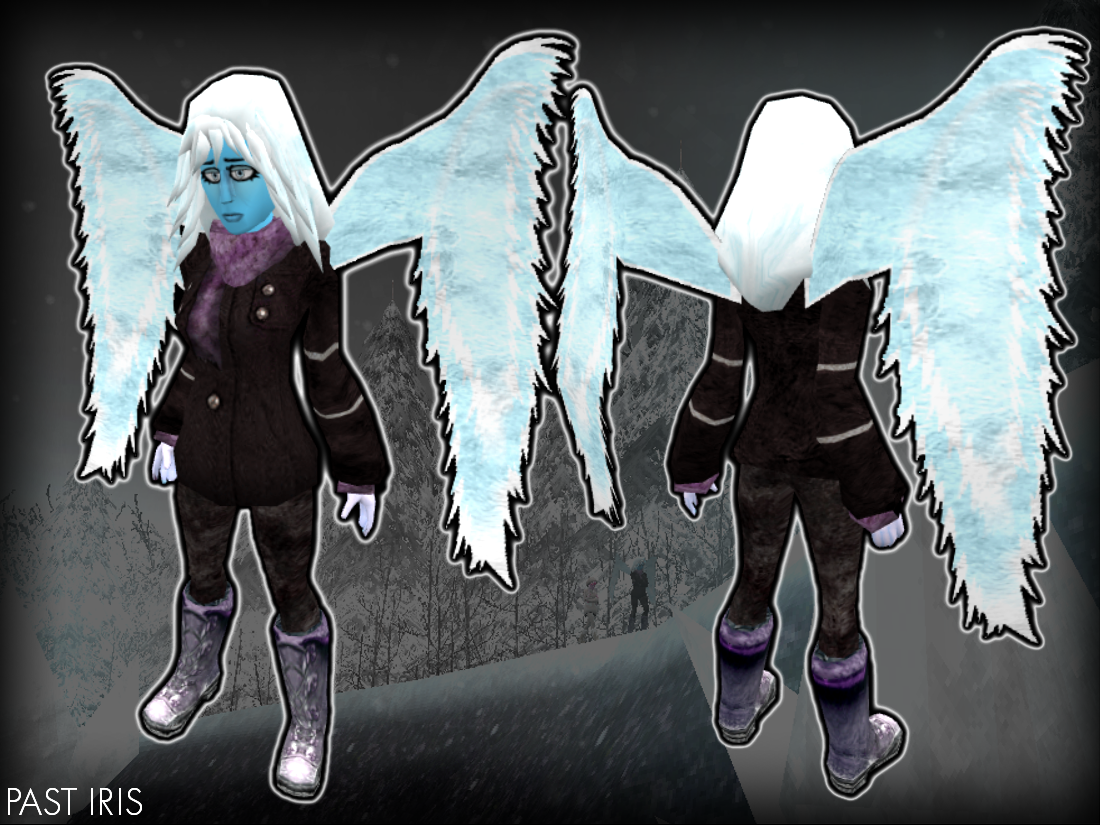 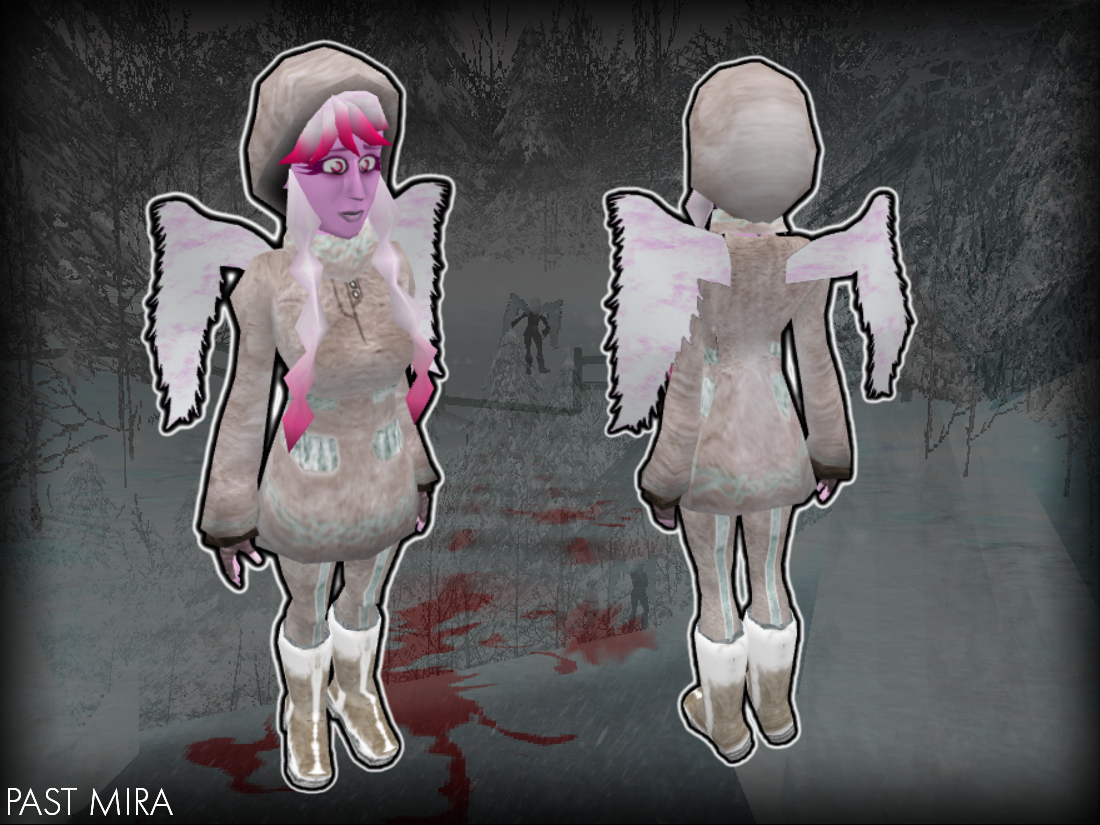 You'll be seeing more of the two of them as Iris slowly uncovers her past & exactly what happened prior to the events of Starlight. No story spoilers here though!

So you've read this far. You're almost there, promise.

By some ungodly miracle Starlight won first place for best upcoming mod in last year's MOTY awards, and to that I still have no words other than thank you all so much. I'm going to do everything in my power to make sure this thing is worth the wait for everyone to play & enjoy when its out. Aside from my composers, _kps and Happyfaceman, and occasional contributions from talented people in my community, I'm the only developer on the project. I prefer to keep it that way, but that also means the project's completion is entirely dependent upon me. With that said, I'll segue into this next topic, as it concerns my wellbeing and by connection to that, the development of Starlight.

For the past 8 years of my life I've had to live in an unhealthy environment where I've been emotionally abused, made to repress & hide who I really am, and made to feel like a complete and utter waste of human life. Sometime early in the new year, I'm hoping to finally leave this place, and move in full time with my father. I won't have consistent access to the internet when I do, as neither me nor him are currently wealthy enough to afford it ontop of the bills we both already have to pay monthly, with my unemployment due to covid & declining mental health not helping. I'll still find ways to update you guys on the status of this project, working on Starlight has been one of the few things thats kept me going & has brought me happiness, seeing all the comments & support I've gotten over the years has always kept a smile on my face. You guys have made developing this mod all the more worthwhile just by joining me on this journey so far, and its far from over.

With every week that has passed this year, existential dread aside, I've genuinely felt like substantial progress has been made on the project. I've had so much time to work on Starlight in 2020, and thats honestly about the only good thing I can say about this entire doinker of a year. What you've seen in this article is but a tiny fraction of all the work that has been done this year. Now that this article is finally done, all of my effort (development-wise, not life-wise) is going to be shifted back towards the completion & eventual release of Act 1.

Its that time of year again!

Theres TONS of amazing mods around, but I'd like to shed some light on some that more than deserve a vote this year! The first being, Half-Life: Dark Matter. I've followed DM closely for over a year now & its shaping up to be one of the most promising mods I've ever seen. An actual, proper official (and then some!) quality expansion for the original Half-Life. I would HIGHLY recommend heading over & giving it a vote & a follow! The second being Resident Evil: Cold Blood! I've been following RECB for a few years now, and when the teaser dropped earlier this year it had me on my toes. Cold Blood is back, and its looking better than ever. You'd be doing yourself a favor to head over to the ModDB page and give them a watch & a vote this year! The third being, Half-Life: Absolute Zero. The product of a decade long journey of passion, research and, most importantly, infuriation. The definitive Half-Life beta experience in my opinion, its well deserving of a vote this year! If you liked my old mod, RainFall, you'll love this one. Be sure & check out all of these mods, I already won something last year, so go & give these a look! They all deserve something this year!

As always, you can join the Starlight Community Discord below!

I'll hopefully be there to interact with you & answer any questions about the project & show off development as it happens! My community is pretty tight knit, but constantly growing! You can view several years worth of behind the scenes & development as it happened in the development channel & catch updates as they come out! You can also share your modding, artwork, and all kinds of creative stuff. Every now then we'll have a game night, or I'll stream the development of maps & other things, so stop on by! 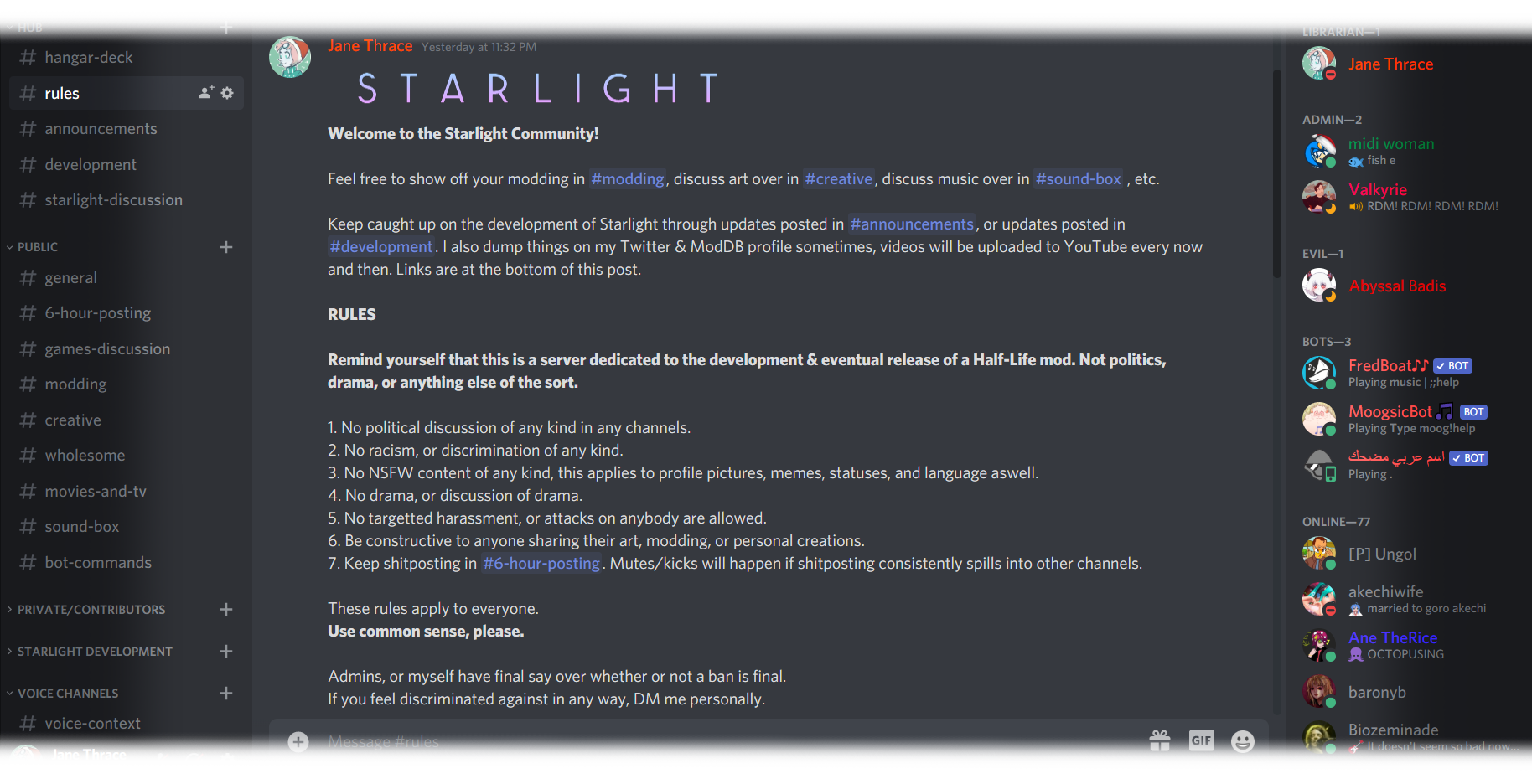 There'll be another time.

Pick yourself up, and face the nightmare. Its the second year of the angel.

Welcome to a world of fallen angels & shooting stars.

So much beautiful :D

Is there a demo available?

My oh my, after the trailer I want this mod...

NICE TO SEE THIS IS STILL GOING! Looking forward to this! I hope to see it finished bro!

Apologies for the last bump, I tried to upload a video but it was apparently an incompatible format & it didn't alert me to this until after it had processed. I'll have something up soon <3

(Edit: it uploaded, had to do it via URL)

Excited to hear this is still in development! I have such high hopes for it!

Found my way here from a Tyler McVicker video. Looks fantastic. Can't wait to play it.

Yes, active updates here will resume shortly. Currently in the process of moving & still handling the release of Signal Lost but I'm slowly getting back into working on Starlight.

The Last Day Of Humanity Half-Life