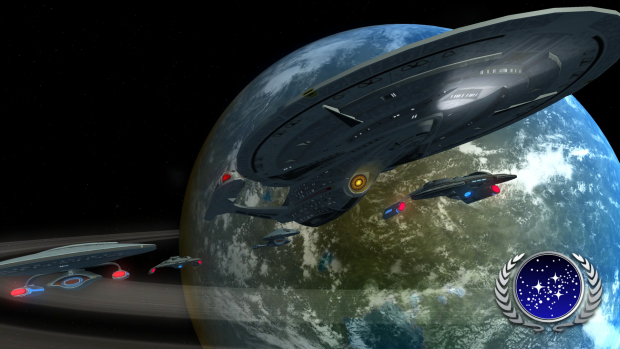 this is captain Jean-Luc Picard of the federation starship Enterprise

I showed my Non-Trekkie sister a lineup of federation ships from the nx all the way to the J and asked which ship was her favorite ship.
After a few minutes of looking at the ships one by one she was about to say she didn't like any of them but stopped and I swear to god her eyes lit up when she saw her first Sovereign, seriously it was like love at first sight, now she's very over protective of my Enterprise E model -_-

There's no two ways about it. One of the most beautiful ships ever designed.

After seeing Enterprise ram the Scimatar I am surprised Starfleet never thought lets put the heaviest form of metal armor plating we can make around the front of the saucer in case of emergencies. Like we could then cut through enemy ships by ramming them as a valid option. Like slice a Romulan warbirds cutting off her bridge from the rest of the ship xP

Federation rams would be awesome(!!!), but sadly not very Trekky.

The galaxy is dangerous you never know when you'd need a good ramming saucer.

"The United Federation of Planets is the most remarkable institution ever conceived. And it is my cause to make sure that this... extraordinary union be preserved."
- Admiral Nora Satie, on the Federation's great value and unique quality

Initially a coalition of mutual defence in the face of Romulan aggression, the United Federation of Planets was officially born in 2161 when the founding worlds of Earth, Vulcan, Andoria and Tellar united as a singular political entity. Founded on ideals of mutual cooperation, shared knowledge, trade, cultural exchange and peaceful coexistence, the Federation has since grown to become the most influential state in the Alpha Quadrant. Like individual drops of water coming together to form a lake, the Federation covers more space than any of the empires controlled by single species, and is now made up of more than 150 member states spread across 8,000 light-years.

Federation membership is voluntary, and comes with a number of significant benefits. Prospective members are assessed carefully for their suitability - member states must be warp-capable and share many Federation principles, such as freedom, rule of law, social equality, political stability, respect for the rights of the individual, and the desire (and ability) to coexist with other species in peace. These shared principles have led to the Federation becoming a beacon of progress, freedom and compassion, surrounded on most sides by more aggressive powers.

The Federation interacts with the rest of the galaxy via Starfleet, a semi-military organisation responsible for carrying out space exploration, diplomacy, humanitarian aid and defence. Starfleet has carried out these duties for more than 200 years, and is often at the forefront of scientific innovation, as well as being on the front-lines in times of crisis or war. Starfleet's reputation for bravery, skill and ingenuity has been well-earned over two centuries spent pushing the boundaries of the final frontier.