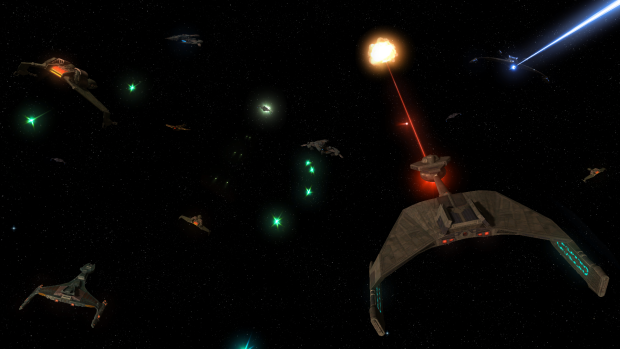 The Klingon Defence Force holds against the combined might of the Dominion, the Cardassians and the Breen.

When the Breen Confederacy joined the war on the side of the Dominion in late 2375, the announcement was met at first with uncertainty - the Dominion had no shortage of allies, toadies and appeasers in the Alpha Quadrant. The Son'a Command openly aided and supplied the Dominion. The Ferengi Alliance hedged their bets and happily profited by selling resources to both sides. The Gorn Hegemony and Orion Colonies remained steadfastly neutral, hoping to parley with whoever won the conflict. Even the obstinate Talarian Republic made efforts to distance themselves from the conflict. Of the smaller powers of the Quadrant, the least was known of the Breen - they had always been insular and enigmatic, and not much was known about their culture, their technology or even their physiology. At the time the impact they would have on the war was unknown.

Such uncertainty soon gave way to terrifying clarity. Mere days after announcing their alliance with the Dominion, the Breen led a Dominion assault on the Chin'toka System, the tenuously held Allied foothold in Cardassian space. Deploying a large combined Federation-Klingon-Romulan fleet to repel the Dominion's advance, the Allies were determined to hold the system.

The first moments of the battle went well for the Allies - several Dominion, Cardassian and Breen ships were destroyed in the initial exchange of fire. Though certainly formidable, the Breen's battle prowess at first seemed...unexceptional.

But the Breen had yet to unveil their true capabilities.