QuakeNam (stylized as Quake `Nam) is a mod that pays homage to the single player aspect of early to mid-2000's Vietnam war games such as Vietcong, Line of Sight: Vietnam, Conflict: Vietnam, The Hell in Vietnam, Shellshock: Nam '67 & Battlefield Vietnam. Using completely new assets, built on the Quake 1.5 mod SDK by bloodshot12 and using LordHavoc's DarkPlaces source port. The further we go in to the jungle, the further the madness will manifest inside us...

I figured I would make a post explaining some of the cool things I have planned for this mod, but I think it's also important to start with one of the major problems that I've been faced with during the mods development; that is, of all things, finding time to work on it. - you may not be aware that I am in my final year of my bachelor's degree, as well as maintaining a full-time job, making any sort of reasonable progress once a semester starts has proven problematic, I've also just finished a summer semester (studying over the Christmas break as I live in Australia), and I have only two weeks off before semester 1 of 2020 starts.

What was the main inspiration for this mod?

I've always wanted to make a game about Vietnam, ever since I was a youngling watching full metal jacket and the like, I've always loved the romanticized vibes given off from those war films. having time spent with a military organisation when I was young, I came to enjoy the aspect of soldiering, I have had the guilty pleasure of enjoying the chaos caused by intense situations and keeping a sharp mine, pushing men to their absolute limits and watching them break. - to be clear, I loved stories told of those who survived war, drafted in without code or creed and finding meaning in the chaotic aftermath from the tragedy caused by war. - the end scene from Conflict: Vietnam, comes to mind; that nihilistic zeitgeist is what I am trying to resonate with this mod.

When should we expect updates?

To be fair there is a lot of work going on behind the scenes on this mod, but not as much as what I'd like there to be, I'm held up at the moment with my final year of university, (2020), and working a full time job, there is only a couple a months out of the year I can expect to get a clear run developing the mod; I've tried to integrate the mods development in to my course work, for example I've made a prototype opening cut-scene this semester that's not quite polished yet, but outlines my vision for what I want in this mod.

I had been yearning for a new, old style `Nam shooter for a number of years now, so much so that I grew tired of waiting and made my own, in that same week (or month) Quake `Nam went live, VietDoom was announced. - I think that's fucking metal! \m/, at first, I felt a bit discouraged because of the possible similarities to my mod, and the possibility that one could conclude my mod was a rip off of that mod, and in a way mine is, as it is based off the Quake 1.5 mod, which in itself is a collection of other mods built from the formula of the brutal doom mod, which I think is kind of cool in a way. - brutal doom is also fucking metal BTW, I first played it during a difficult time in my life and it gave me the balls to keep fisting my demons. 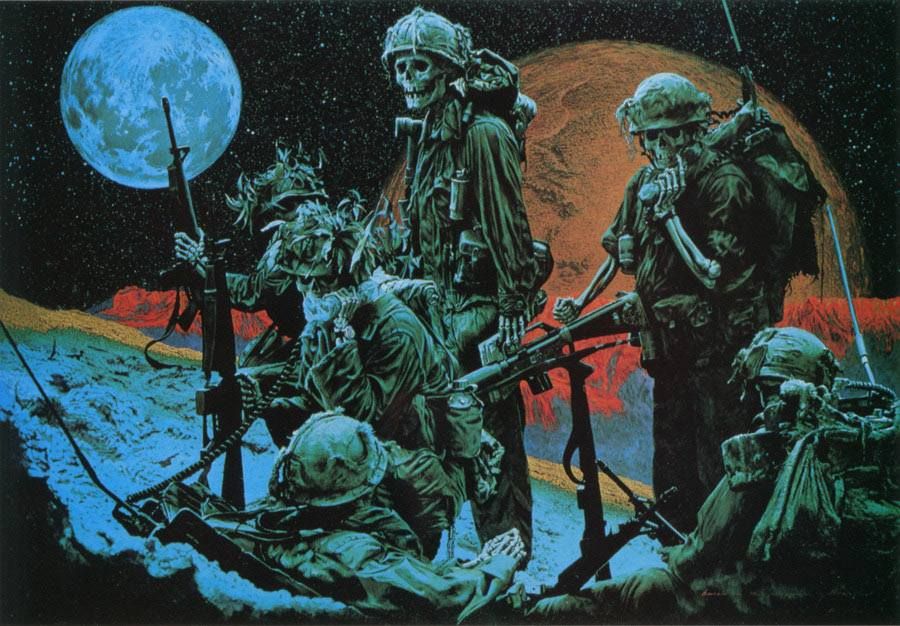 While I don't have a solid idea nailed down yet for Quake `Nam, I can say that my game plans to focus more on the psychological impact that war can have on a person during moments of intense fear and after the fact; think Spec Ops: The Line, but that's all I'm gonna say for now.

Where are you at with the mod?

A few things since I last updated you all with the progress of the mod.

The F-4j Phantom has been textured, I still need to add bombs and missiles and fuel tanks etc. but it looks nice.

I added an M101 Howitzer 105mm cannon as another vehicles prop; these will look nice around the fire base, note that the skin work\texture isn't final, - this actually came from a 3d modelling unit I did last semester at university, the texturing was rushed as I was running out of time to work on it.

I think the last thing I did was put a texture on the Stevens Model 77E shotgun,

Currently I am working on an M2 Flamethrower.

On my hard drive I've got a HTML document called Quake `Nam Development Charter; it's a formatted HTML list that ill drop below, it should hopefully give you guys an idea of what needs to be done before I can get this thing in to alpha.

I guess for now refer to the Development Charter above, once I've got the groundwork down, I'll be happy to add in more weapons and stuff as the mod develops.

Any idea on the campaign?

The campaign is set around a Firebase called Shub-Niggurath, and will follow the operations under the guidance of an intelligence officer LT R. Prince, I haven't really had much time to write more on the story other than that, I was planning to make the campaign in the style of Vietcong (2003).

What do I need to run this mod?

At the moment the mods running with Darkplaces as its default source port and will include the shareware version of quake to use as a base, it will come complete packaged in a .ZIP file with launcher executable for Windows, Linux version to be available in the future shortly after the initial release.

As for my test system, the oldest system I am planning to test this mod on will be a HP 8000 Elite SFF PC with an Intel Core 2 Duo 3GHz Processor 4GB of RAM, no graphics card, running windows 7, 10 and Linux. - if it works on that, it will work on your computer.

No planned release date at this stage. - university has me by the balls at the moment. Sorry.

Thanks for reading,
Mark

I'm really loving the weapon models so far! Hope to see more progress into this mod since (aside from VietDOOM) I'm hungry for more single player Vietnam games!

Cool When will it be released ?

When will this be available

What program did you use to make those models?

I used to use Misfit Model 3D (http://www.misfitcode.com/misfitmodel3d/) but it no longer functions properly on Windows 10 64-bit, Maverick Model 3D is basically the same program...

the u2 cover of fortunate son is something i could have gone my entire life not knowing about. ._.

I've been meaning to post an FAQ to cover a few common questions, but my biggest hurdle and the main reason I haven't been able to work on it has been completing university; the mods not dead, I haven't forgotten about it, my life's just been drained by full time work and university assignments.

There will be an update soon. ;-D

In The Shadows Quake