Quake Epsilon is a graphically enhanced build of shareware Quake 1 for Windows/Linux/Mac, which can be upgraded to the full version of Quake along with it's mission packs Scourge of Armagon and Dissolution of Eternity by copying the full-version .pak files into the correct folders.

It's made out of the Darkplaces engine and many mods from members of the Quake One forums and elsewhere (these are listed in the readme for each pack) as well as my own work. If it were not for these people, this build would not exist, so consider thanking the authors directly. These builds are legal and do not contain pirated content. Just simple unzip-and-play stuff.

There are four graphics modes, which you can switch between via a batch file ('High' is the default):

Please note that it runs much faster on Windows, so that would be my platform of choice if you have the option.
I don't want to clutter this summary, so more details and all credits can be found in the readme for each pack and on the homepage (http://www.soulstudios.co.nz/epsilon).

It Has Risen - More Dimensions released 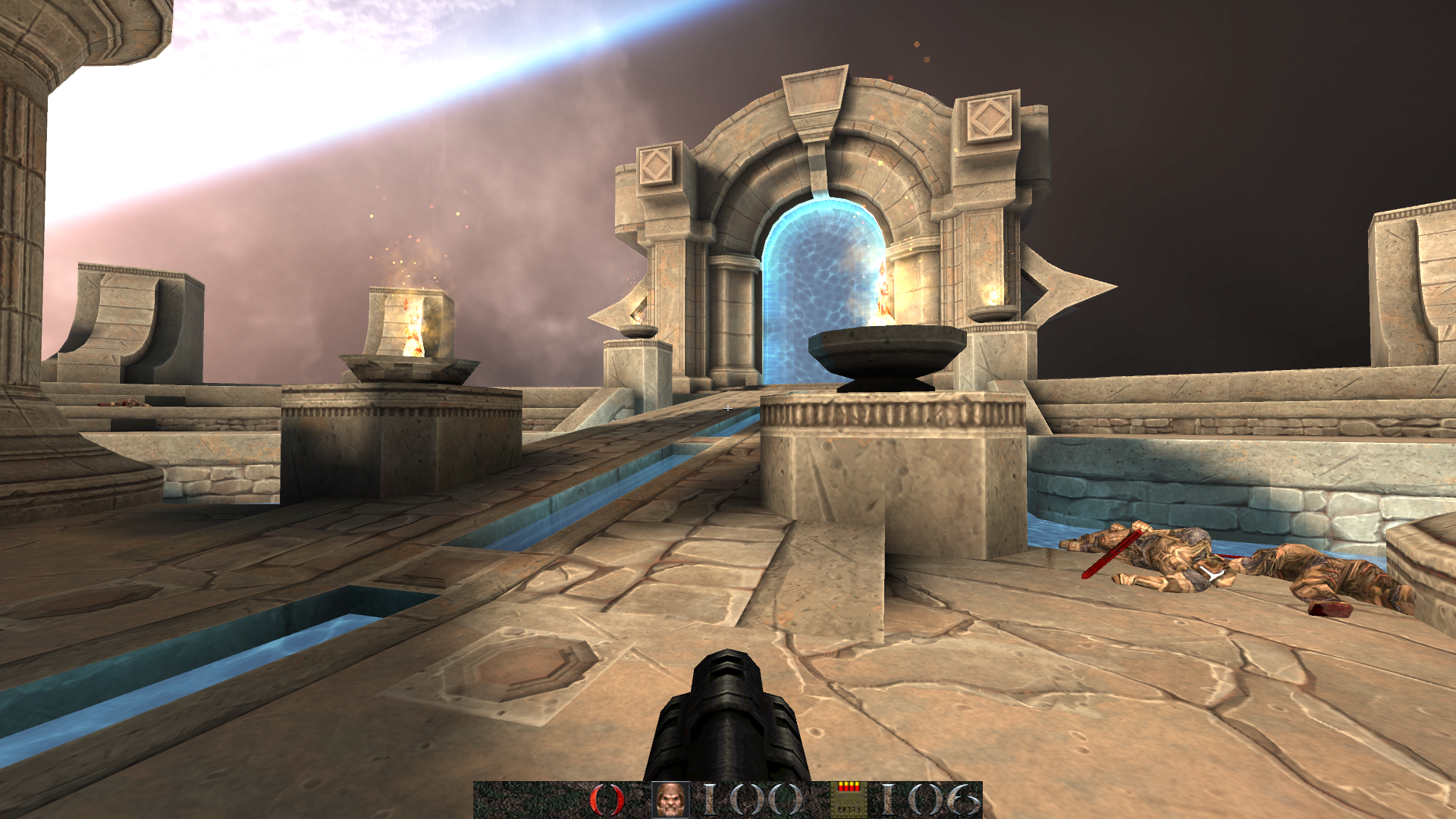 Okay, so this has been a long time in the making, but is finally finished. For those not already familiar with the concept of More Dimensions, it is:

I did a release mini-trailer to complement the previous teaser trailer:

The music in the trailer is part of the soundtrack for one of the levels (Grendels Blade).
If you want to use this game with a different engine, such as vhquake, drop it in and alter the batch/bash files to suit. However I make no claims about compatibility with any engine other than the included Quakespasm-spiked, nor will I be giving help with other engines. 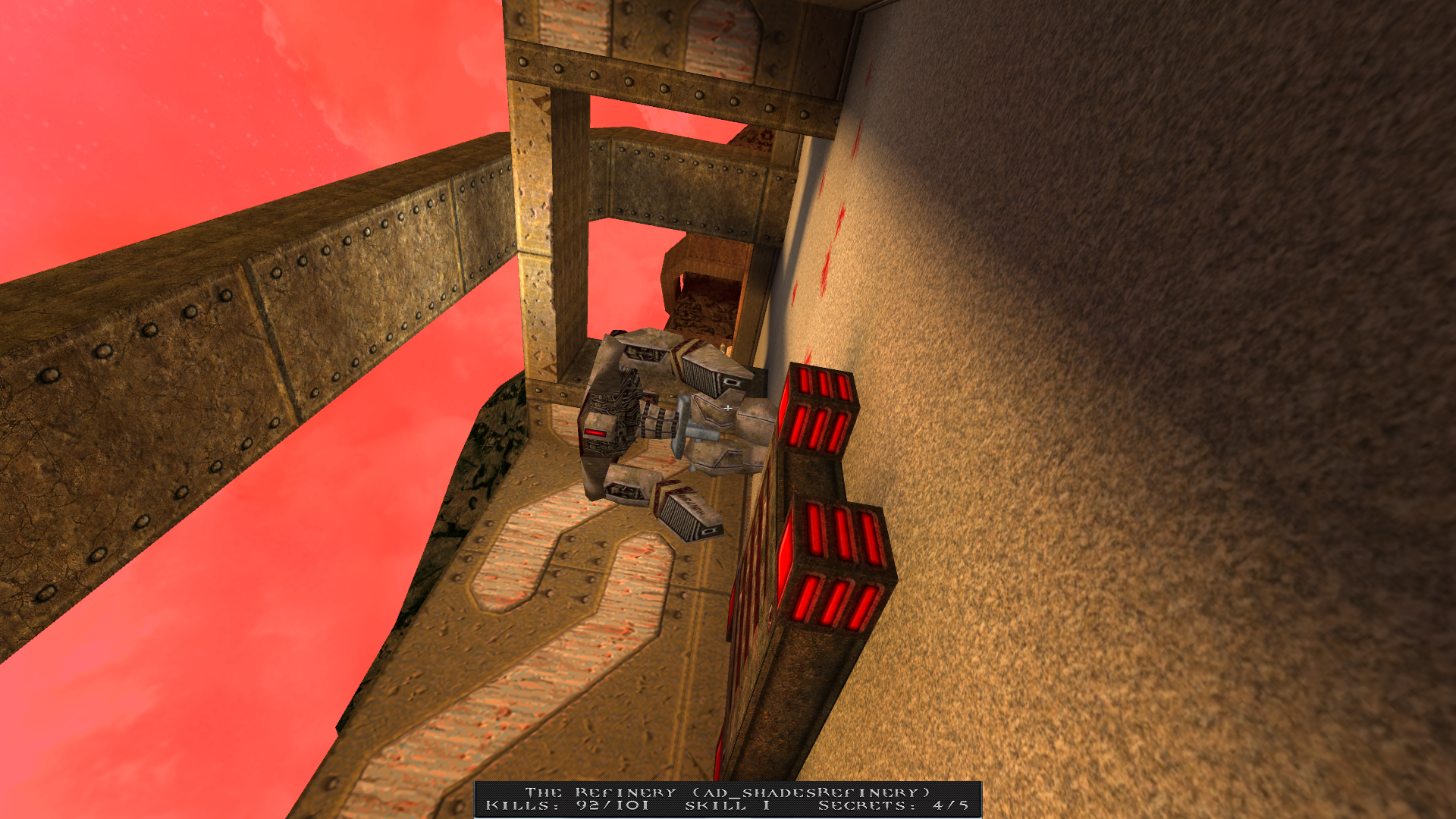 Some specific thanks to a few folks: SimonOC of course for putting together AD in the first place, all the level designers for the levels included in this release (see the download page for more details on that) and Makkon for his help in getting, finally, HD versions of the original ad_tears textures for everyone to use. I had to rebuild half of them again from the textures he developed and the originals, and it's his work that made it possible. 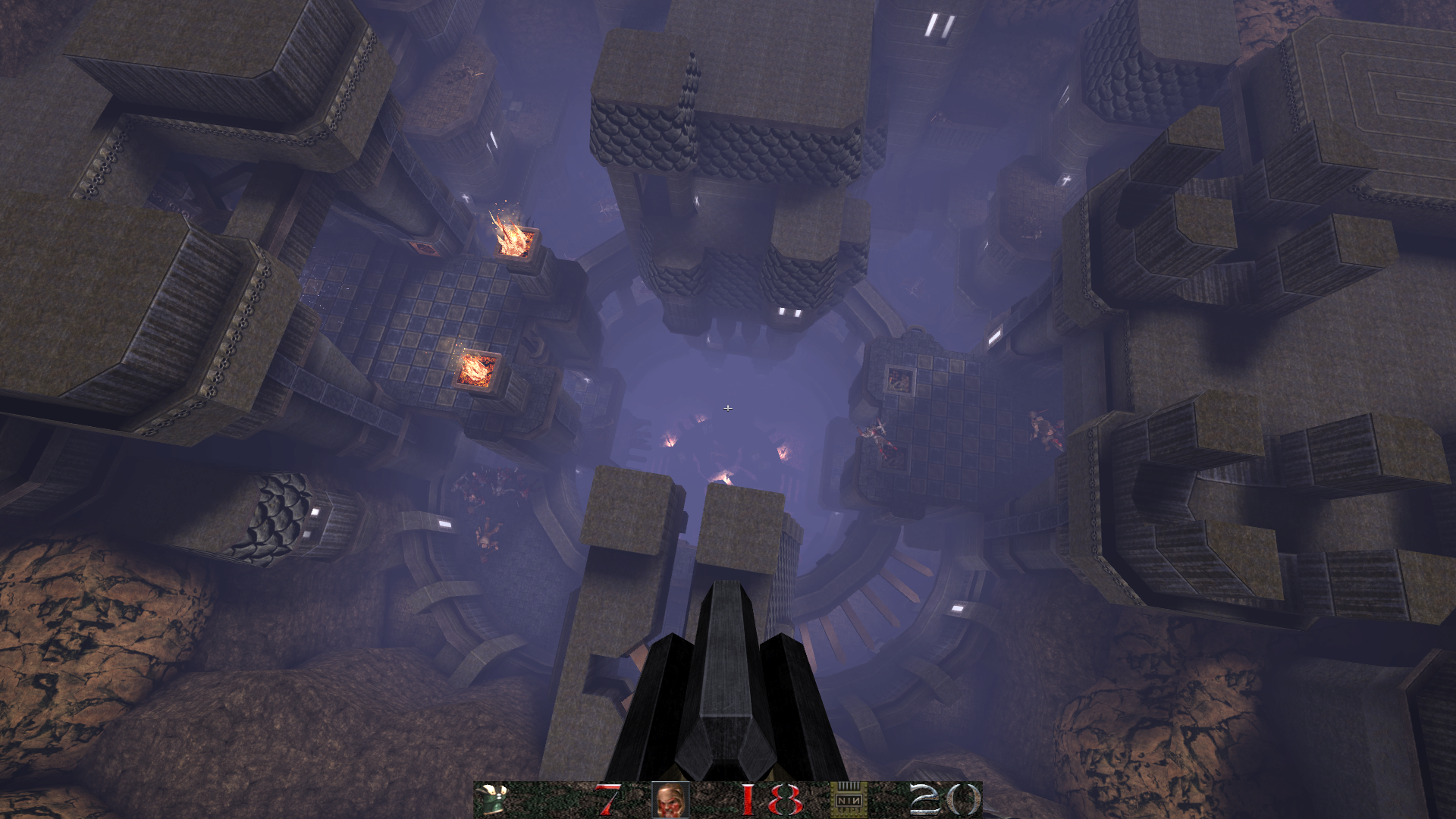 Finally, this will be my last release for Epsilon. I feel ten years is long enough to put into a project. Time to move on. I still like Quake, but I like other things more. Hopefully you understand, or you enjoyed the games regardless. I of course reserve the right to contradict myself at a future point in time - but that is unlikely to happen now. 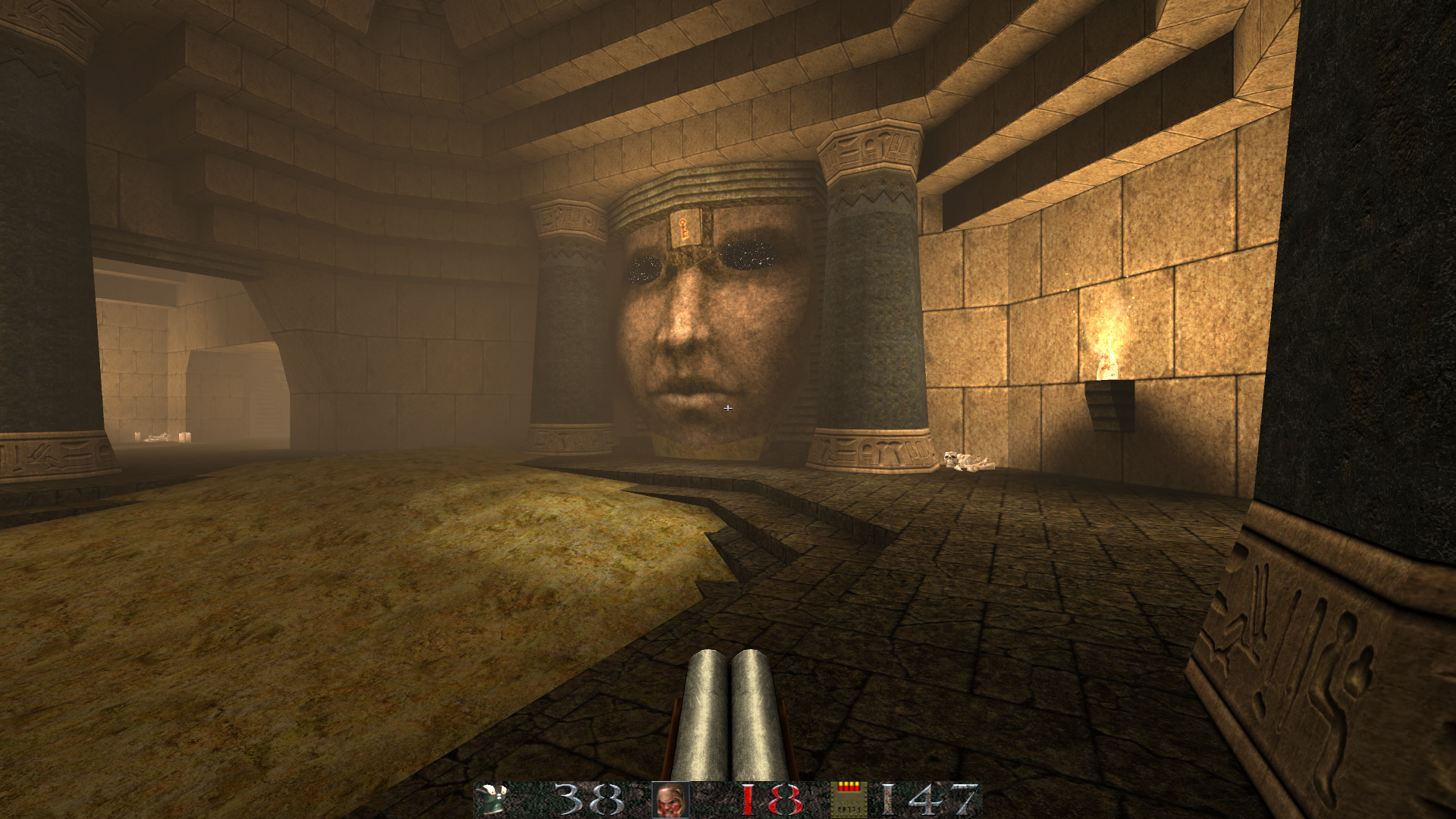 There will be one more post, detailing the release of the soundtrack and some of the life experiences, work and field recording which went into that, which will follow in about a month. But for now, goodbye, god bless, so long and thanks for all the rotfish! 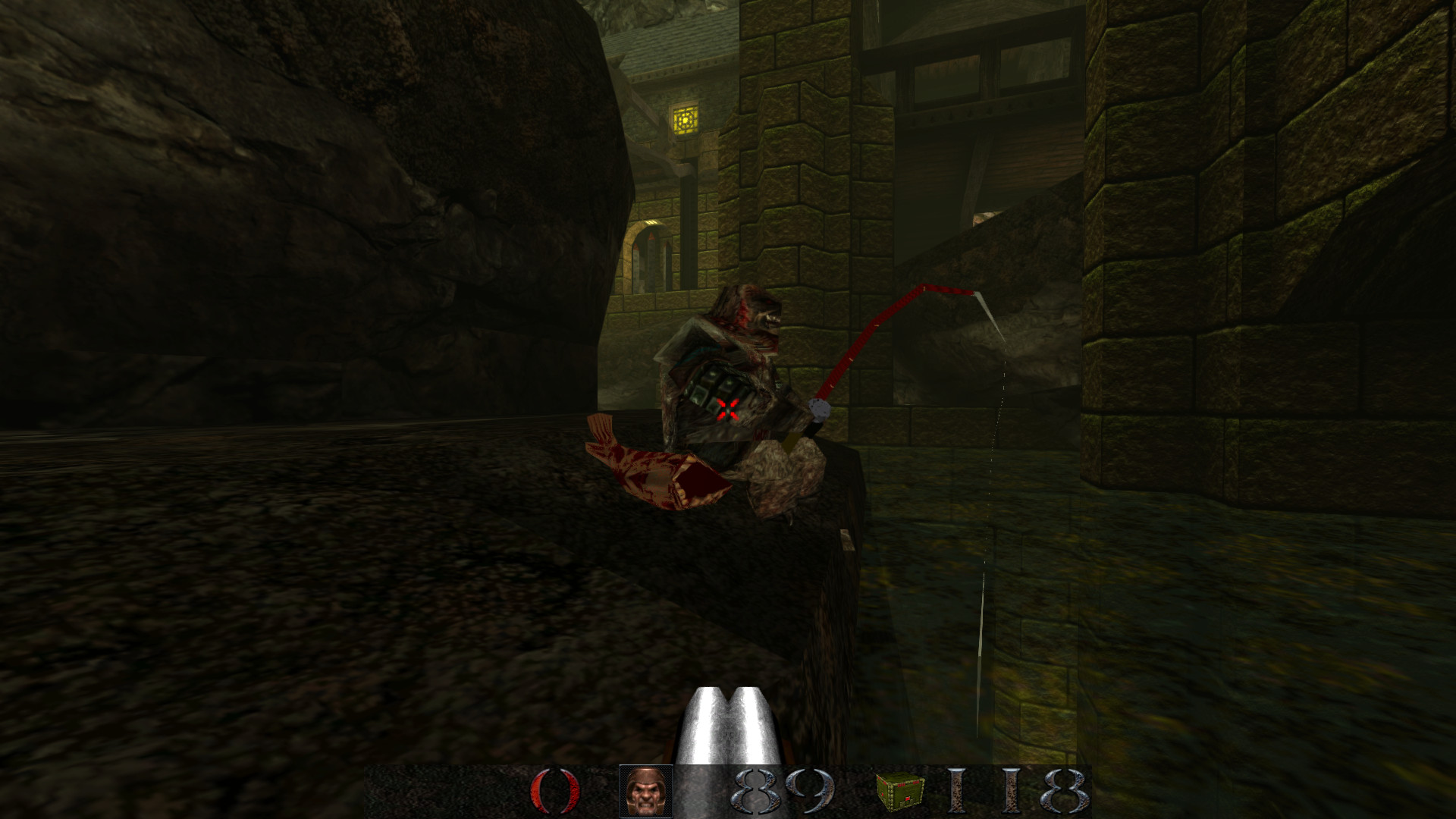 More Dimensions should be out sometime soon. Fingers crossed, no further delays.

Hi folks, some big updates today, these are maintenance/quality changes for quake epsilon and it's present expansions, as well for Arcane Dimensions HD.

The trailer for More Dimensions, plus a callout for testers for some of the older expansions.

This is a HD compilation of levels running under Quakespasm-spiked including: (a) The levels from Arcane Dimensions 1.8 which were not present in 1.7...

Arcane Dimensions, by Sock (Simon O' Callaghan) + many others, is unlike any other Quake expansion out there. Each map, or 'dimension', teleports the...

Quake Epsilon is a graphically enhanced build of shareware Quake 1 for Windows/Linux/Mac, which can be upgraded to the full version of Quake along with...

I've done a lot of work to make sure that this and the other mission pack, dissolution of eternity, look different to Quake Vanilla. There's different...

I tried to make this mission pack a completely different experience to Quake Vanilla and Mission Pack 1, with different models and textures for as many...

Abyss of Pandemonium - the 'unofficial' (but still commercially-released) third mission pack for Quake, and most likely my last official addon. A great...

Just two things missing for this to be the Quake mod I've been waiting for: higher-poly models and skeletal rig animations.

Does this work with Quake Remaster, yet?

yesn't, does not work with quake remaster

I've got an issue. For some reason, the ui size is so big that it doesn't even fit in my screen. After I finish level, some random big numbers poop up on my screen with the epsilon font.

Btw, i'm using a 16:9 1920x1080 resolution monitor, and I have set up the resolution settings in-game, but it still didn't work, the text and numbers just doesn't adapt to my resolution.

Check "vid_conheight" in your id1/config.cfg
This is the parameter which controls the size of the UI relative to the screen.
Other than that, can't advise.

Hopefully you will be able to do the new freebie Dimensions of the Machine which just dropped today for the Quake 25th anniversary. Thanks for all the hard work over the years. Despite the re-release, it doesn't even remotely come close to this amazing port. I can never play vanilla Quake again lol.

Agreed. I came here to say the same thing, and you stole my thunder. Not sure if I wanna play Vanilla Dimensions of the Machine, or wait for an Epsilon mod? Can you still get the Steam Achievements if you install Epsilon on the Remastered Quake?

does it even work on the remaster? i thought this required darkplaces to run