We regret to announce that the Subsistence project has been put on hold for the time being. Due to reasons beyond our control, we've had to halt all progress. It's been an absolute pleasure to work on this project for the past 1.5 years and we apologize about the disappointment. The Blue Isle team is moving forward to work on another project featuring the UDC and Sentinels, and we'll have plenty more details for you guys soon, so please stay tuned. Thanks for all of your support!

A New Year, a New Direction

I founded Blue Isle nearly two years ago. In that time I've had the real pleasure of working on something that is a huge passion of mine; RTS games. I've also met and worked with some amazing and truly talented individuals. I want to start by giving a genuine thank you to the entire team at Blue Isle.

A few months ago I was forced to make a very tough decision; putting our first game, Subsistence, on hold. What does this mean? Well, we ceased all production on the game as we re-evaluated the company. 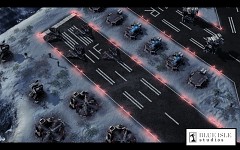 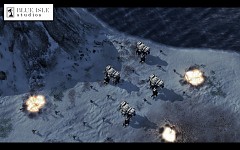 It was becoming increasingly tough to continually fund the development of a game with no end in sight. The Art Tools which we badly needed from Blizzard were nowhere to be found, and the Marketplace is being delayed indefinitely. The original plan was to spend 1.5 years developing a game, upon which time we hoped the Marketplace would be up and running.

I knew from the beginning this was a huge risk to take. Spend time, money, and resources developing a game for a platform we weren't even sure existed. Some risks pay off, this one didn't.

Subsistence is on hold, but it is not cancelled. If we can come back to this game at some point in the future - we absolutely, positively, will. 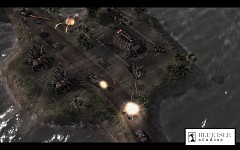 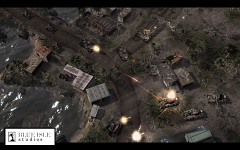 Moving forward, I want to tell you guys about our new plans. We have a new game in the works that we are really excited about. The game universe, story, art, and gameplay we have created for Subsistence is not going to waste.

Mobile touch-screen devices are becoming an increasingly viable platform for gaming. We spent the past three months designing a new game concept. It's an RTS, but we spent a ton of time thinking about how to tailor this type of game to a touch-screen device.

Touch controls allow us to do some really cool things that wouldn't normally be possible in an RTS.
As such, we are designing this from the ground up specifically for iPhones, iPads, and all Android mobile devices.

We are in the early prototyping stages and as soon as we can show you guys some content and screenshots, we will post them here.

Finally, I want to give one last thank you to all of you who have supported us thus far. Your feedback (both positive and negative) helps us as game developers to improve our work and keep going forward. I will let you all know as soon as we have a new game to announce.

We are proud to present today, the first trailer for our newly announced game, Subsistence.

Showing the latest concept artwork and in-game screenshots. Help us fill out our FAQ.

Showing two new screenshots along with one piece of concept artwork.

Hey folks you still around after all these years? Blizzard just introduced premium custom content.

Just remembered this. Sad it went now were.

I am very sad to see this mod on hold for more than 3 years now. I haven't known it for long; I discovered it after the announcement was made.

I really wish these guys could at least lend out a few of the assets they made. I mean...that snow tileset. Damn, I would love that! Even if just so that I have something resembling a tileset for Braxis.

It's shame for this studio to rely on the marketplace becoming a thing. I don't think it will now that so much time has passed. I think not enough people like the idea of paying for custom StarCraft II content, even if it's super duper good. The marketplace would be very nice for mods such as this one, in which a proper company is making it and the development of it is essentially the employees' living.

Art tools are out now, so half of the reason why this mod was put on hold is no longer a problem, at least.

I still need to emphasize how much awesome this would have been. I love the new features you were bringing that StarCraft II even now does not have.
New ground unit pathing so that troops move into realistic formations. That's awesome!
New aircraft pathing and weapons that allow for proper dogfights and other more realistic and awesome aircraft goodness. That's even more awesome!!!
Better lighting, with better weather effects (lightning!!!) and dynamically moving shadows. So essentially, more immsersive environments. That's what I want more most from StarCraft II. Hopefully Legacy of the Void delivers on better environments...
From the screen shots I've seen, there's some really good doodads and props, and really good terrain textures that I am gushing over. I wish I knew how the terrain was changed, how it was created...well, and I also wish I could have those assets but..well...
Every units fires projectiles? And there's an accuracy feature for weapons? YES YES YES!!!!!

It just seems like the perfect mod because it adds so much to StarCraft II. I'd love to have it if only to implement it's improvements to environments and unit mechanics into StarCraft II itself.

So sad there are so many good potential mod that are DEAD.

Too bad you guys dont want to use a different engine like UDK or Unity 3D.

Starcraft 2 Art Tools available now we just need the market to get this game going again :(

Awesome looking, more realistic than vanilla scII. I like it!

As long as you don't completely kill it I'll gladly wait for what will probably be an amazing total-conversion mod.

they will wait till blizzard releases the long awaited sc2 marketplace i guess.