Phrozo Particles 2 is a graphical enhancement mod/addon specifically made for Sikkmod 1.2 for Doom 3. It includes particles from Phrozo Mod 2.0, as well as new particles, textures, and materials unique to this mod. There are no game play changes or any other requirements, only new particle effects, such as: muzzle smokes, projectile trails and impacts, blood wound particles, monster particles, teleport particle effects, barrel explosions, and ambient fire particles. This mod was designed to work alongside Sikkmod 1.2 seamlessly. Simply install by placing this mod in the Sikkmod 1.2 folder to relive Doom 3 in higher definition with much more detailed and vibrant particle effects. 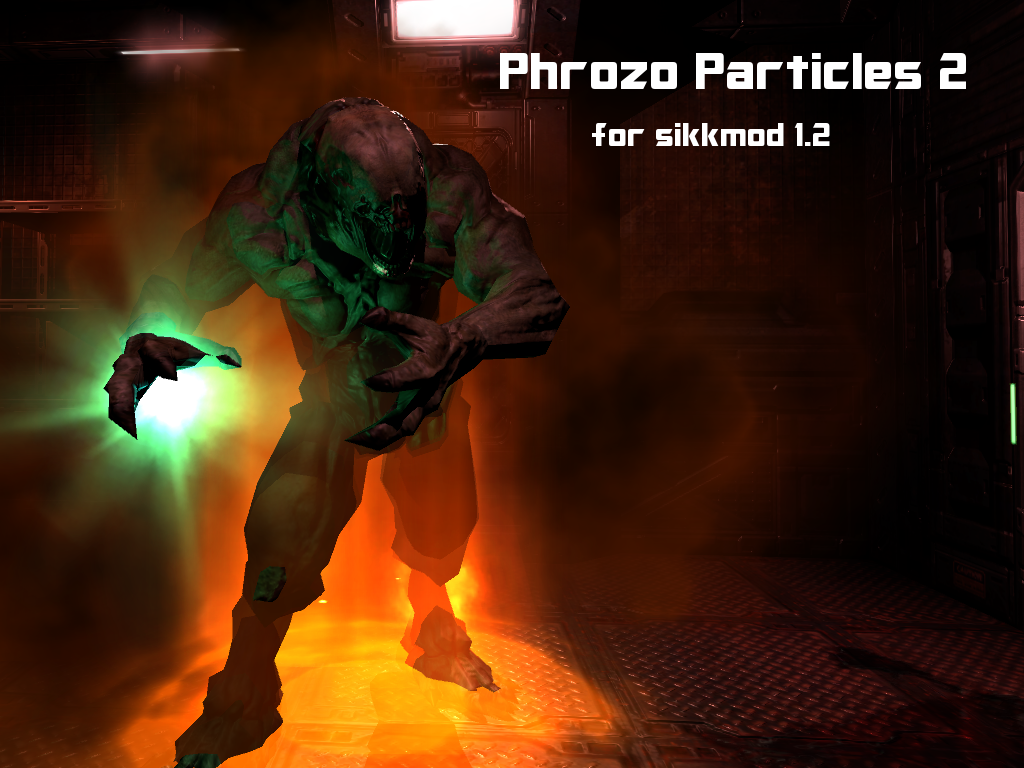 I am pleased to announce that I have officially released a particle mod that is fully compatible and ready to use for Sikkmod 1.2 for Doom 3 and you can download it here.

Previous works were not directly compatible and took effort by users to implement some of my earlier works themselves but that should no longer be an issue as I've carefully found all the particle effects I wanted to modify in Sikkmod and overrode them directly. In short all the hard work is done. No need to track down the particle references you need to make to use the particles I've made. This should work 'out of the box' so to speak.

For those who aren't familiar with my work or who I am, I'm a modest modder for Doom 3 specializing in particle effects. I've done script, code, and other things as well but it all seems to center around particle effects. My main reason is I've always felt the particles for Doom 3 could be vastly improved using the existing particle system for Doom 3, though it definitely could be better with some coding.

Problems with particles in Doom 3

* Oddities like the muzzle smokes spewing in weird directions or fading in and out too late or too soon.

* Particles in general were very dark and low in detail. Dark particles against a dark background essentially makes them invisible and pointless to have.

* Unrealistic particles, such as bullet impacts, which resemble glorified snap pops I used to get as a kid during 4th of July more than when shooting at stuff at a range at materials.

* Lack context with the world. Whether you shoot at glass, sand, or metal, you get the same particle effect.

So I took it upon myself to make particles that were brighter, more vibrant, detailed, animated, and logical than in the original Doom 3. This has been long and tedious process, and over the years I have made many new particles in place of the particles I thought were not the greatest, and whatever I made I always released 'as is', never specifically for any mod. This meant that my work always had to be hand implemented, which is probably the biggest reason my work is often overlooked.

Over the years I have had a few requests to have particles made for Sikkmod, and after seeing how Phrozo Mod 2.0 has essentially been a great disappointment to me and with very little interest from the Doom 3 community, I have concluded that the last major contribution I make to Doom 3 modding is to take some of my finished and unfinished work and port it to Sikkmod before I go into hiatus until further notice. 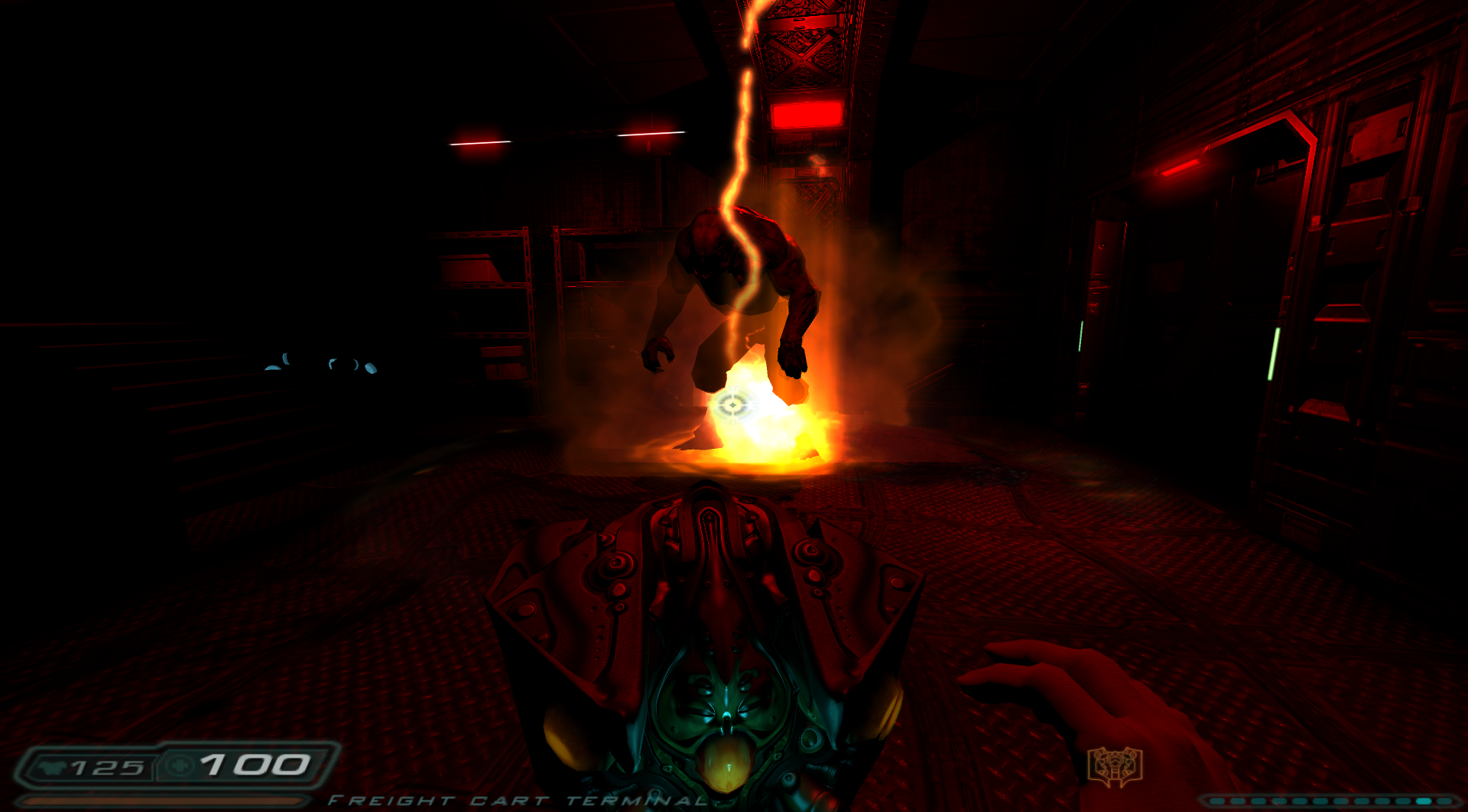 These particle effects are fairly new, with the oldest being from Phrozo Mod 2.0. The rest were either particles intended for the unfinished and now 'dead' Phrozo Mod 3 or new particles I made specifically during development of this mod.

This mod is also very compatible with plain old vanilla Doom 3. It should also work with ROE, though no specific effects were made for the expansion. In fact, this mod should work with just about any Doom 3 mod unless changes were made to particle references that are not similar to Sikkmod 1.2 or Doom 3 1.3.1.

So if you're looking for newer particle effects for Sikkmod 1.2 or Doom 3 to better complete the eye candy, please consider Phrozo Particles 2 for Sikkmod 1.2. It's an easy install, just around 10.8 mbs.

Phrozo Particles 2 is a mod specifically for Sikkmod 1.2 for Doom 3. It includes particles from Phrozo Mod 2.0, as well as new particles, textures, and...

great addition to the atmosphere :) Working fine for me with redux with
seta image_preload "1"
seta image_roundDown "1"
like someone posted on the file's comments section

Exciting, yet still inferior to the main mod itself.
Is there a chance of returning of green blood for trites and sand jets?

This is a very late reply but the answer is no. No more Doom 3 modding. Adding those features would begin to add incompatibilities as well...

Will there be a phrozo mod v3 coming? If not, what are your plans now.