Operation Market Garden (OMG) is a persistent multiplayer only modification based off the award winning real time strategy game Company of Heroes. We put a strong emphasis on balance, community, transparency, and fun. Currently in an open beta, we are constantly improving, adding new OMG features and content.

Through our website players can tailor their company, customizing it to fit their play style and needs. The website based War Control Panel allows the player to join their teammates battles against the enemy. There's no in game resource management, no base building, and no gimmicks. It's just pure multiplayer combat, building on the already superb platform of Company of Heroes, and it's pure fun. Win or lose, surviving units stick with you throughout your battles. The war persists, your troops persist, and its all at tip of your fingers.

We're developing a sleek new website based interface for managing the meta-game, which will improve upon the easy to use system already in place. A quick and simple updater installs the modification, keeps it current, and launches it. We even have an extensive wiki that reflects the modification and community content. If we don't have it we're probably already developing it, so you have all the tools you'd ever need to lead your troops into combat.

For a more in depth guide to Operation Market Garden's features see OMG & You.

OMG's uses the regular Company of Heroes factions including the Allies, US and British, and the Axis, Wehrmacht and Panzer Elite. Players can pick a faction from each side to use in a campaign that adds depth to the the titanic struggle. Alongside these war accounts OMG offers a skirmish mode, or fun accounts, in which you can play as any army. This allows you to try out different company builds, strategies, or just wish to play a game with no strings attached.

There are three game modes in Operation Market Garden. Map Control Points (MCP) and Victory Point (VP) determine how your population gain or loss is calculated, and Spectator mode is for live broadcasts of your games.

OMG's persistent war represents the never ending struggle between Axis and Allies where your impact its ebb and flow. In addition, your surviving troops and the combat experience they gain carry over from battle to battle. Additionally, from winning battles you gain victory points,
which are used to customize your army.

The combat experience your units gain translates into one of the five levels of veterancy present in OMG. The first three levels improve your units fighting
capability. At the fourth level you can customize your unit's name, and at the fifth you can add a custom skin to it. This system promotes smart game play as it urges you to conserve your units, use them wisely, and make sure that they retreat off the field when worn down.

Naturally, units start as off as inexperienced and are at a minor disadvantage when fighting experienced units. To counter this and aid new players we've added rubber band systems, which help to soften the learning curve.

Along with experience you can earn victory points by winning the game. Winning occurs when your opponents runs out of units, surrender, or you control the map. Victory points are the common currency and one of the main features of the modification. They are used to further customize your army in the many systems described below.

OMG features an easy to use website based interface that houses the War Control Panel in which you manage your account. You can design your company's layout, create and join games, add passwords to games, choose your map, and has a real time chat function.

As in vanilla Company of Heroes you can chose doctrines to specialize your company. Each company can have its own doctrine. These are the same three doctrines per army in Company of Heroes, but they're currently being redesigned and expanded by our development team. Our plan is to have players' companies constantly evolving to fit their play style. Using victory points players can pick and choose from a number of unique abilities, new units, resource bonuses, and other benefits. 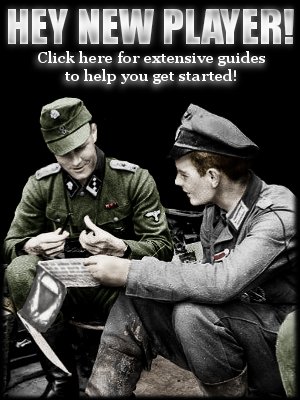 OMG has an active and busy mapping team that as of October 2010 supports 40 exclusive maps. These are tailored to complement the modification's game play and are a significant boon to the community.

The modification has an active and quirky community who are dedicated to its improvement through communication, testing, humor, and friendliness. The bustling forum allows users to network and talk about everything OMG. On it you can post replays of your best battles, look for feedback from the community, and critique the mod, and provide suggestions to help improve the OMG experience.

One way that we've found improves the OMG experience significantly is using our own TeamSpeak server. This make much easier to communicate with other community members, find and play OMG games, and talk about the latest news. If you ever have any questions you can just hop right on and ask away. We're sure that you will find someone who is able to help.

OMG has tireless shoutcasters that can provide you with your OMG fix wherever you can plug into the world wide web. Community members Cadmus, Dr.Nick, and FatalSaint have each produced over 20 episodes.

Additionally, the modification's information superhighway, OMG:Wiki, contains all the information about OMG that you will ever need. It possesses everything from unit information pages, to veterancy tables, and community content.

OMG Mod is back after a brief hiatus, please join us at our new domain: omgmod.net

We have been hard at work resurrecting the mod and getting it back to its former glory. New dedicated development, game balance, game design and moderation teams have finished building and are hitting the field. The current focus is to balance the game using the mod's unique pricing functionality, as well as introduce new and exciting tiered doctrines to allow for a new meta to shine forth.

The latest release comes with balance changes and the return of the monthly war cadence, not to mention regular reward unit challenges.

Valued cargo
Flakvierling gains:
-10% received damage and accuracy
0.05 hp/s regen
+10% burst duration and turn rate This all is temporary
This all is on the way once we learn how to code
(Bug Fix) Added 35% more health on gun
now grants trucks improved PE-HT armour (the new one, like PE-HT armour, but half dmg from rifles), and +35% hp

TC can do his job!
+5 los on vehicles buying the 50cal upgrade
5vp

Smokey shots
Range 40->45
Can be targeted into fow

New Reward Unit
Luftwaffe AT Falls have been replaced with the Crete Veterans
Crete Veterans:
Slightly better at everything
5 man squad
Can smell your snipers
This is a placeholder unit to tide you over until we create something more unique.

At long last Tier 2 doctrines have been released! Head on over to OMGmod to get started!

Operation Market Garden mod is now playable on the new steam version of VCoh.. The new servers have brought an enormous performance boost in networking...

Good news everyone! After a quiet spell Operation Market Garden has had a good seeing to! Details inside...

It's that time again and there is the smell of change. A few minor changes and some niggling bugs have been fixed. See inside for more details.

All Files necessary to install the mod. Copy the contents of this folder into your Company of Heroes Folder.

The up to date launcher for 2021. Contains all the new content, the beginnings of the tier 3 roll out and some simplifications to the launcher. Just place...

OMG is proud to present a new version of our combination Installer/Updater/Game Launcher now in one compact format. See the description (read more) for...

how i can install this mod please help me

Are there any new units? Or is it just a different way to deploy?

There are new units and it's not just simply a different way to deploy. The mod is multiplayer only. You build a specific company on the website with a finite amount of resources. You then join a battle with other players and call on the units from your company as you fight for territory.

Does this mod has its own multiplayer server or uses relic online? (which is shutdown)

The mod has now switched over to the Steam servers!

Would I still be able to play the vanilla Tales of Valor with this mod?

Yes you would be, the mod does not replace or change any of the Vanilla CoH files