The next chapter in the groundbreaking real-time strategy franchise from critically acclaimed studio Relic Entertainment. This standalone game features two unique armies with full length campaigns. Players will experience fast-paced dynamic tactics like never before, in two of the most brutal World War II campaigns ever fought.

Take command of the tenacious British 2nd Army in the vicious battle for Caen, France, or lead the German Panzer Elite as they struggle to repel the largest airborne invasion in history.

With two intensely cinematic campaigns, mission persistence, improved vehicle AI and weather effects that directly impact the battlefield, Company of Heroes: Opposing Fronts supports DirectX 10 and is fully compatible with the original Company of Heroes. Battle online with these two all-new armies and a total of four playable armies - allowing players to wage the ultimate war for Fortress Europe.

As we head into the year 2021, it’s time for another update! In this article we will present the revised Command Trees. These will be included in Company of Heroes: Back to Basics 5.0.

The Command Trees were revised in accordance with the respective faction overhauls, which were covered in previous articles.

While the original Command Trees were unique in concept, some were too specialised around a single purpose or playstyle. This resulted in an overall limited variety of possible strategies for the player, but also made certain trees much more appealing over others. Additionally, the available progression options were often limited, often favouring one branch over the other.

Our intention is to permit various progression paths that synergise with various faction strategies. The nodes for each branch were shuffled around to offer more logical and interesting choices throughout, while also mitigating the evident power differences between branches. Practically every feature in each of the Command Trees received some attention; from minor balance adjustments and bug fixes, to fully revised functionality of certain abilities, units, and upgrades. In addition, plenty of brand new content has been added with the aim to broaden the versatility of each tree.

It is now possible to devise a strategy and a set of reactive choices down each of the command trees which will allow one to supplement their base faction tech paths, covering their weaknesses or empowering their strengths, and allowing for reactive answers to what the enemy might throw at you. Generally, this will often result in traveling down multiple branches at once, and having to assess each choice a lot more.

There have been some general design changes to some classes of command tree abilities as well.

Off-map artillery and airstrikes have seen a significant increase in their cooldown timers, and the time between incoming shells of artillery barrages is longer as well. Previously, these abilities were available for use during nearly every large engagement, often deciding the outcome once deployed. By reducing the availability and increasing overall barrage duration, the aim was to both reduce the overall ‘nuke’ effect that these abilities had and to make players more mindful of when to use these abilities.

An effect of these changes is a greatly improved come back potential when losing control over the map, as having a strong munitions income no longer results in endless free damage and area denial from these abilities. Additionally, the munition cost has been reduced for all abilities to ensure that the overall accessibility remains relatively even throughout the course of a game.

Lastly, artillery and airstrike warnings have been redesigned from the ground up for better readability and to fix an old bug of disappearing/invisible indicators. Abilities now feature a combination of three warnings to ensure that players get notified of incoming off-map fire support; one indicator directly visible on the map, one on tactical map and another on the minimap.

Another noteworthy change is that all special call-in vehicles now feature a fuel cost that is comparable to similar vehicles found in the main faction arsenal. As these vehicles do not require specific tech to be deployed and often permit skipping certain tier structures altogether, it was previously possible to field powerful vehicles and tanks without the need to invest and manage fuel spendings, which often snowballed into oppressive advantages.

Upgrades that directly boost the primary combat capabilities of units now feature a visual indicator to ensure the readability towards the opponent, besides implying which command tree progression was chosen.

Abilities that would previously be applied globally to all units available to the player are now activated onto targeted units within a circular radius. 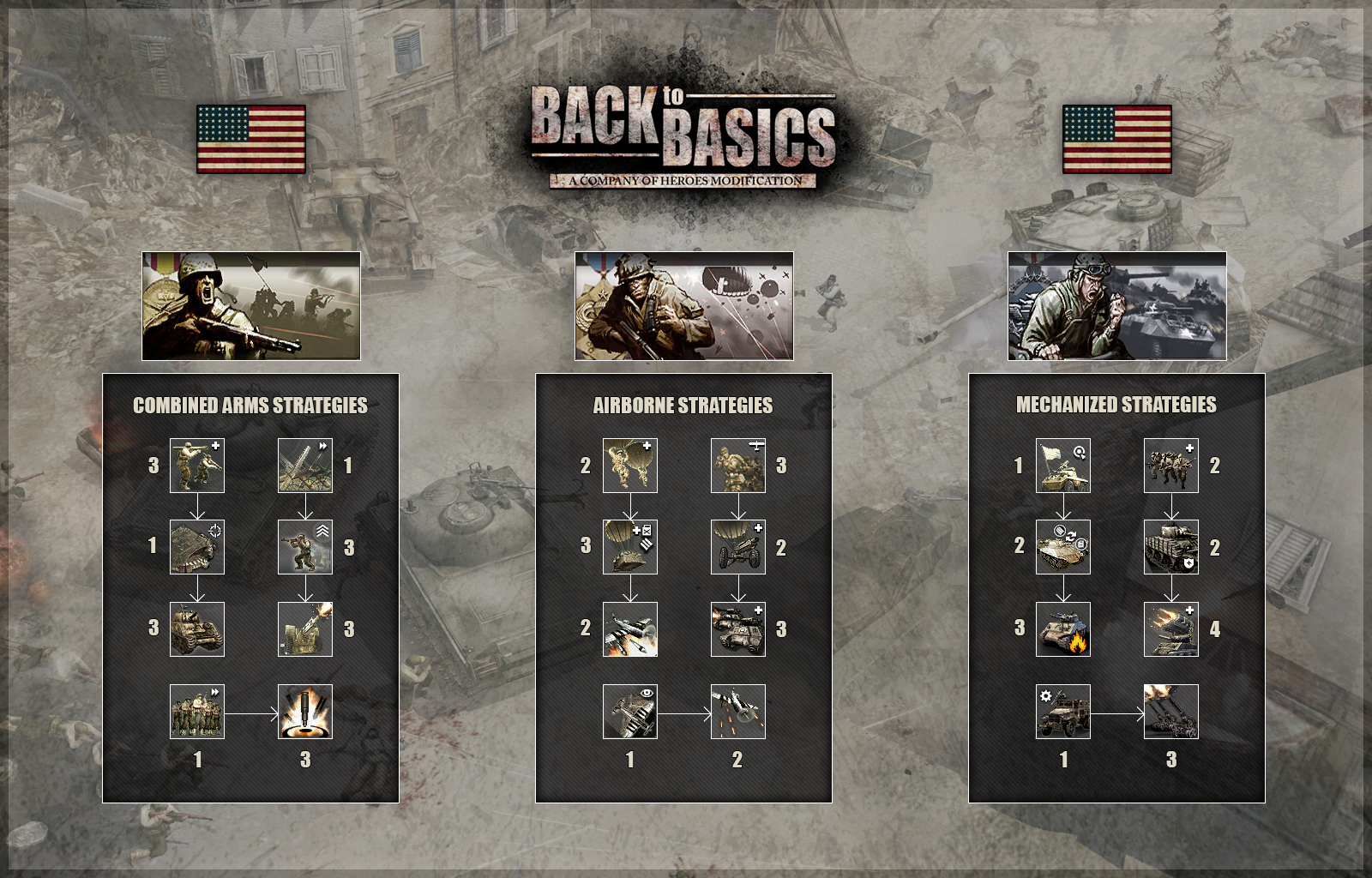 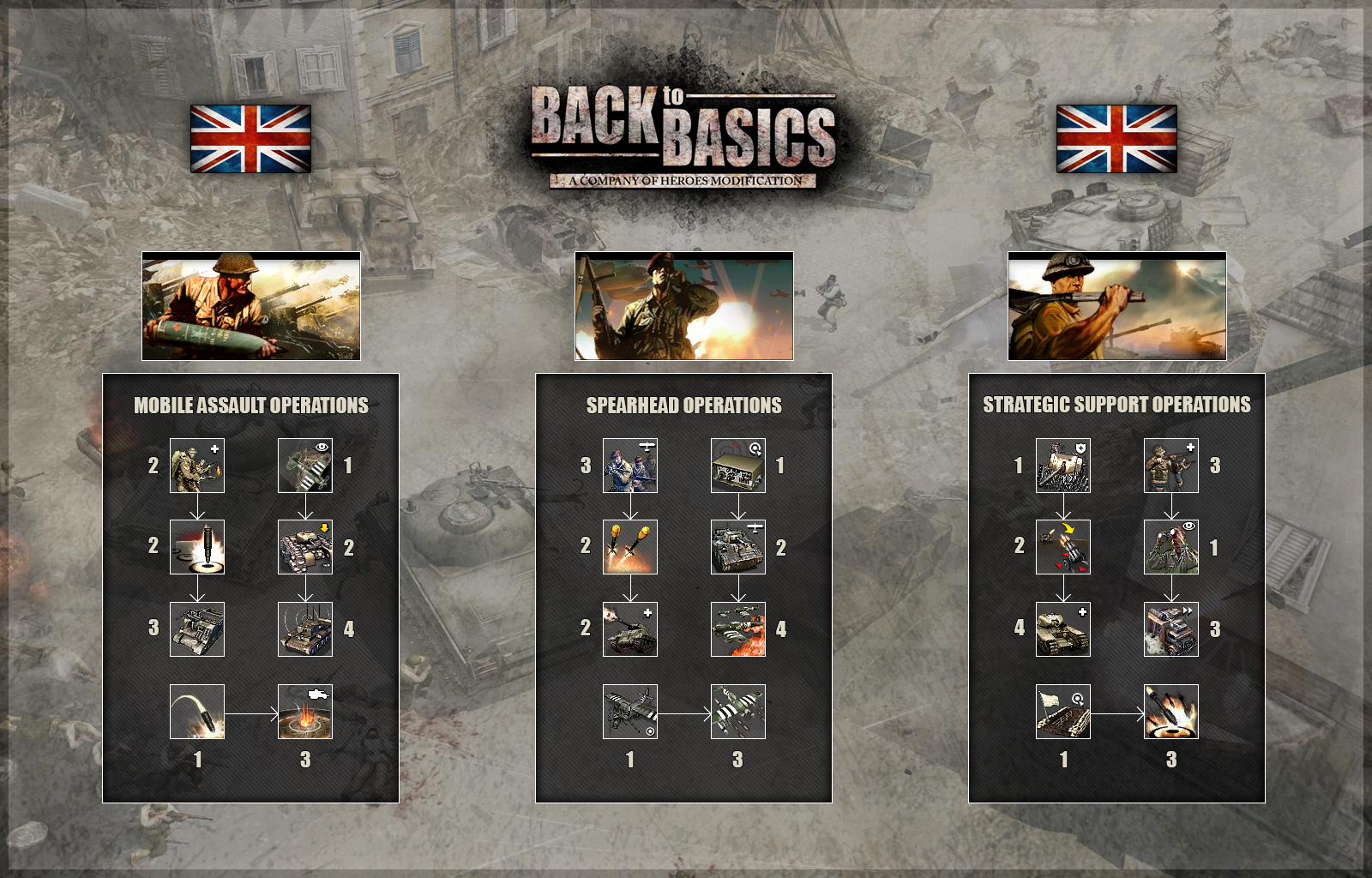 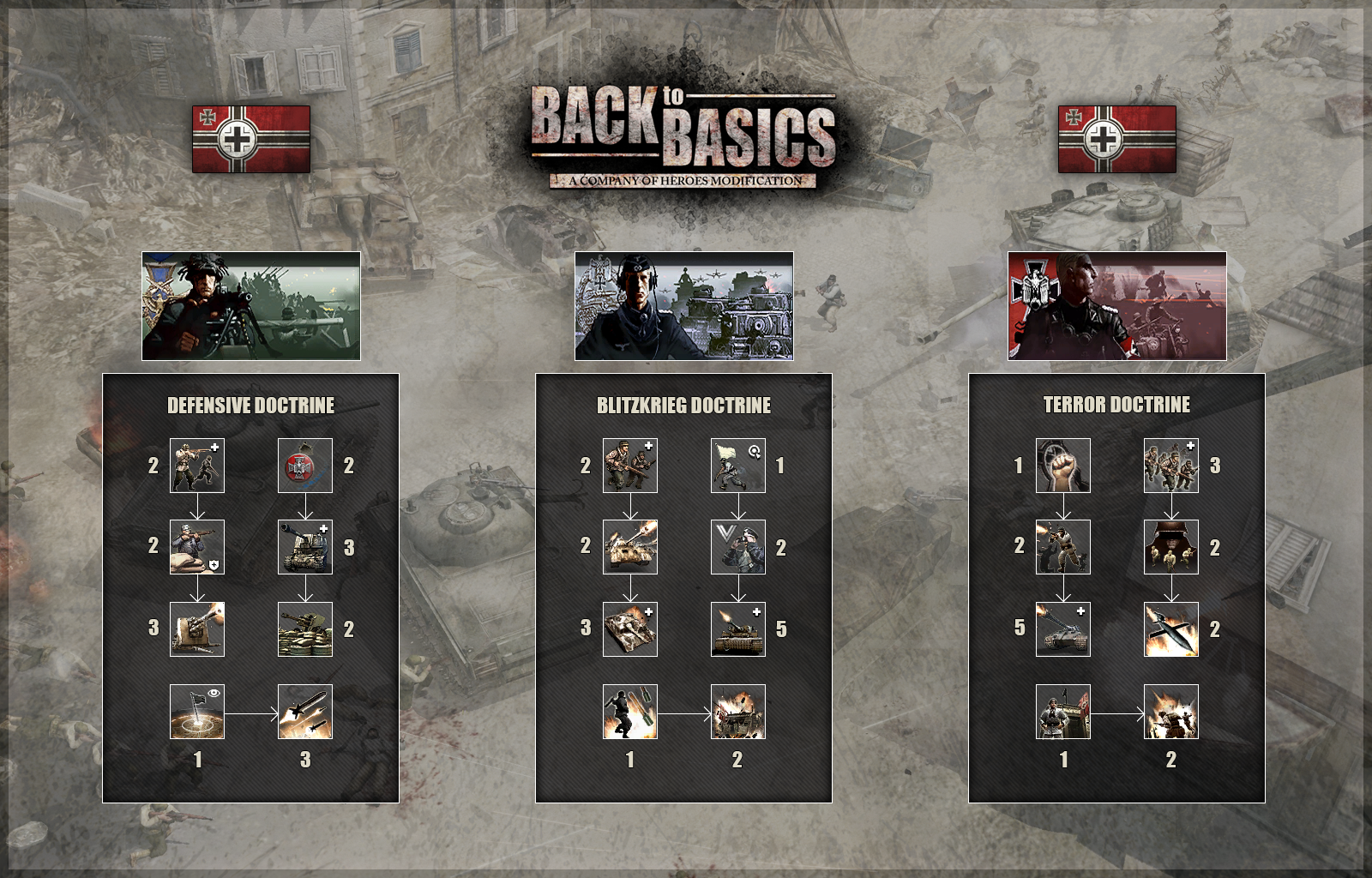 Focus on enforcing a stronghold on territory. Advance with Schützen infantry and Geschützwagens, while fortifying the frontline with 88 mm Flak guns. Wreck havoc with Rocket Artillery, and the leFH 18 Howitzer.

Enforce supreme propaganda to inspire your troops while demoralising enemies. Advance with Obergrenadiers and the mighty King Tiger, and strike fear with dreadful V1 Rockets and Firestorm bombardments. 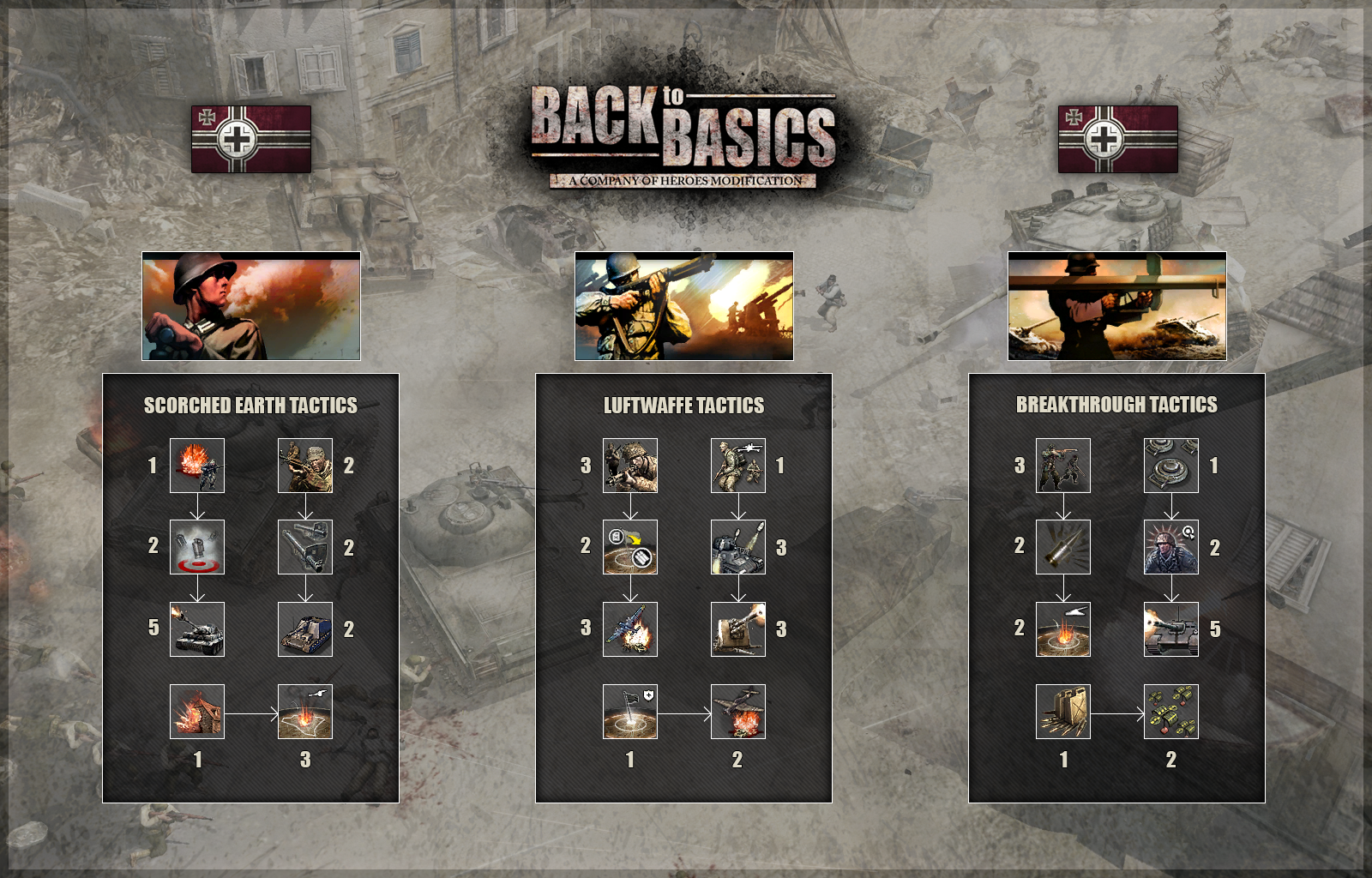 Use various sabotage and ambush techniques and artillery to entangle your opponent. Utilise Jägers, Tiger Tanks, and the destructive power of the Hummel Self-Propelled Artillery to advance past established frontlines. Choosing this tree will grant the Kettenkrad the ability to plant Booby Traps.

Fallschirmjägers, Luftwaffe Ground Forces, Hotchkiss Tanks, Air Support, and powerful emplacements round out the versatility of the Luftwaffe. Choosing this tree will grant the Kettenkrad the ability to use Concealing Smoke.

Break through frontlines with Panzerfüsiliers and the mighty Jagdpanther, while wrecking havoc with Railway Artillery and Butterfly Bombs. Advanced ammunition and infantry training round up the power of Breakthrough Tactics. Choosing this tree will equip the Kettenkrad with Repair Kits.

Thank you for reading this article! We wish you all a good start of the new year and hope you all continue to stay safe and take care of one another during this pandemic. If we've piqued your interest, please consider joining our Discord.

This discord server is where we keep our on-going changelogs, and offers the opportunity to be in direct contact with us concerning the mod. The platform is also the entrance to gaining access to the Back to Basics 5.0 Sandbox.

Showcase of one of the major features of Company of Heroes: Back to Basics 5.0; the revised Americans faction.

Showcase of one of the major features of Company of Heroes: Back to Basics 5.0; the revised Wehrmacht faction.

The full winrar version for Battle of Crete 3.9.3 There are two nations in the game presents - British Commonwealth and Germany.

All Files necessary to install the mod. Copy the contents of this folder into your Company of Heroes Folder.

The up to date launcher for 2021. Contains all the new content, the beginnings of the tier 3 roll out and some simplifications to the launcher. Just place...

This is the full version installer, it can be run as an executable or opened via Winrar for manualy extraction. The files should be installed into SteamLibrary\steamapps\common\Company...

Audio editor for BSC container files found inside sound folder. With it you can change for example the volume of the effects played in the game. All credit...

GUYS! Does any Napoleonic or Linear Warfare mod for CoH is exist?

Anyone here can upload in the addon section where every texture is uploaded individually on each unit?

This is more than Command & Conquer and Star Craft "Get the resources, build a shit-load of units and steam-roll your enemy" style of game. Not that there is anything wrong with that. I do like to play a 15-20min game with no "consequence" for loosing or wining, from time to time. But ever since Company Of Heroes came out...it's just amazing This game is way more realistic and in-depth than any other WW2 RTS game out there*.You have your account and as you play you get higher military rank and…