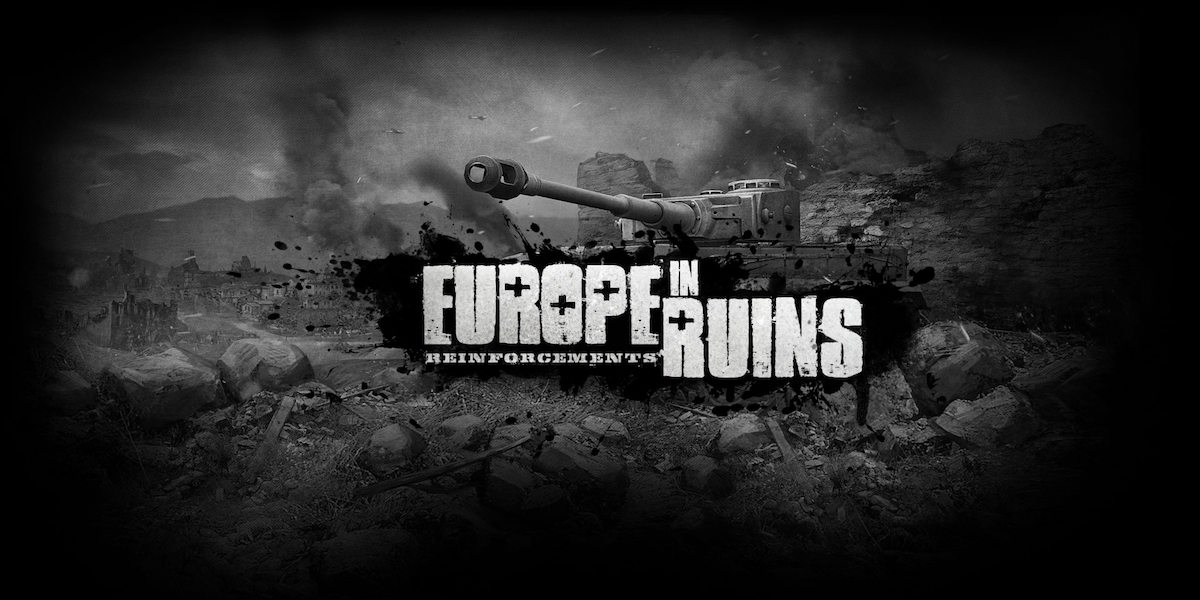 Europe in Ruins is an award-winning multiplayer-only mod that takes the fast paced, intense and surreal combat that you've come to know from Company of Heroes and combines it with persistent environment,
ever changing meta-gameplay and ongoing war. The modification sees you creating and commanding your very own battalion in which you can customize with any
units and upgrades you wish; Company of Heroes strategy has never had so much choice. Not only do you get to build up your battalion, but as you units battle,
they will gain and retain all the experience they have earned, carrying over from battle to battle; going from green to elite! Not only do units gain veterancy, but
your battalion as a whole increases in effectiveness through doctrine unlocks and other advantages. Each of these unlocks are designed so that the player can
tailor their battalion to their own likes and play styles. The combinations choices are endless!

What is in this current release:

The mod is now available for direct download through steam. Once installed, you will be prompted to create an account in our launcher programme which will give you access to to the company builder, war campaign and battle lobby where you will get to create your first company and find other players to play against. 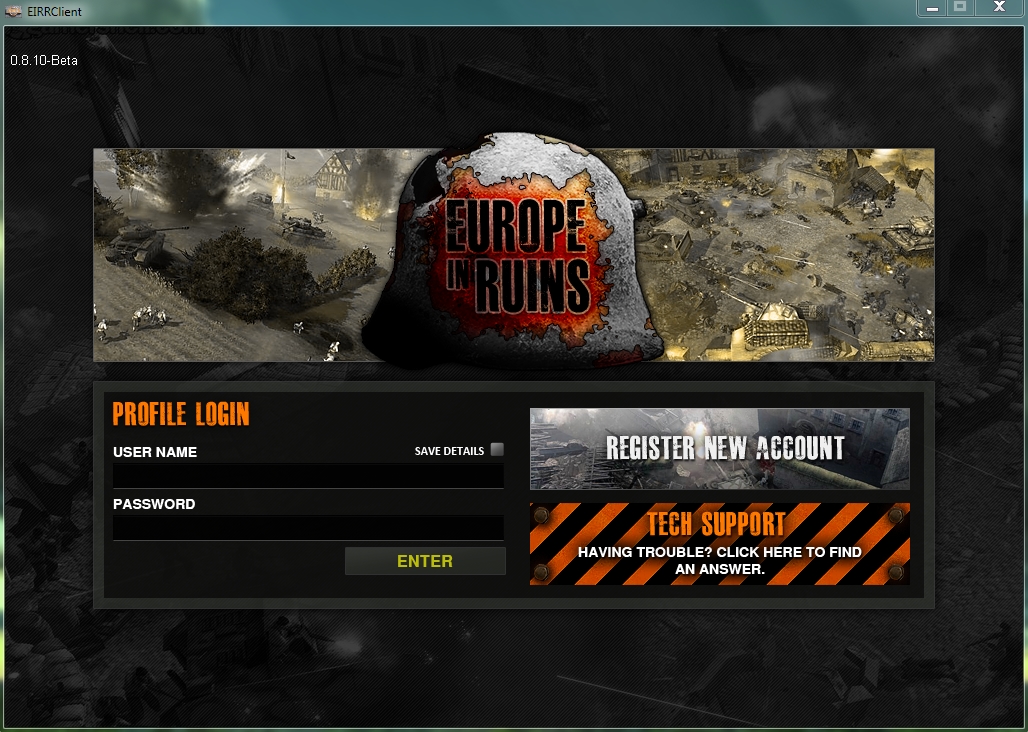 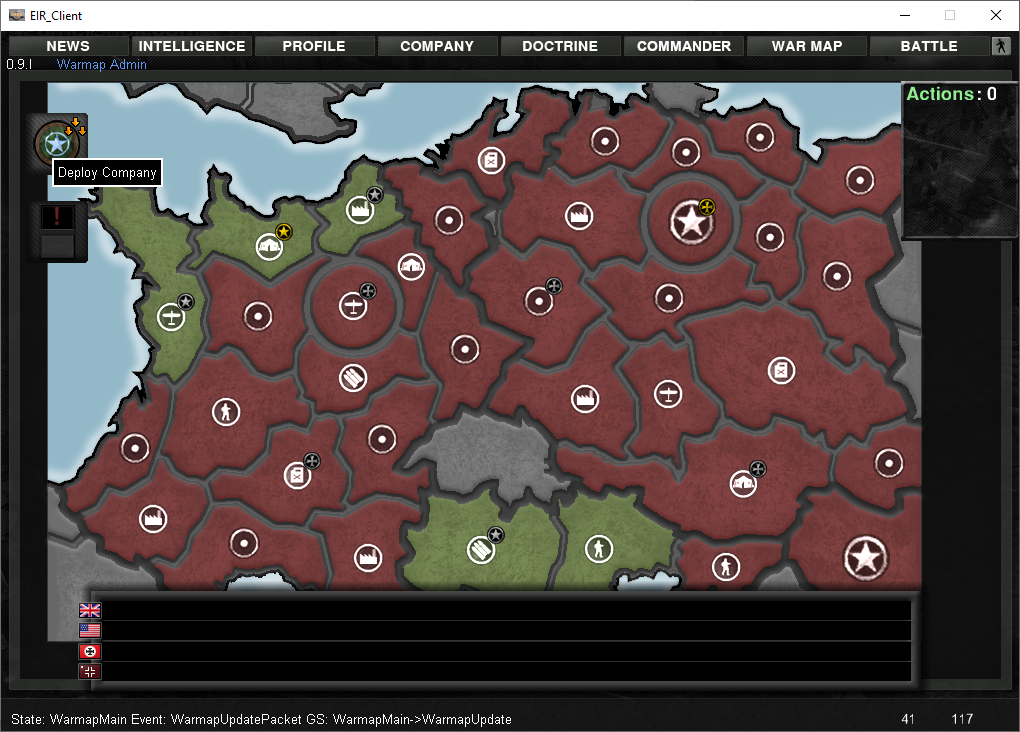 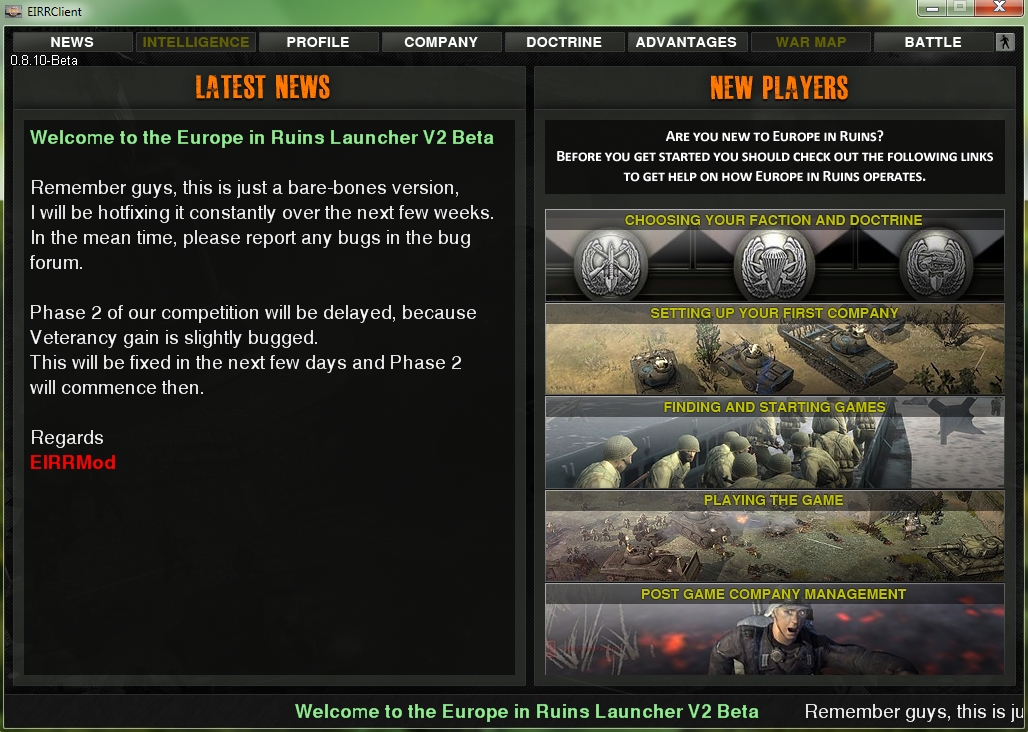 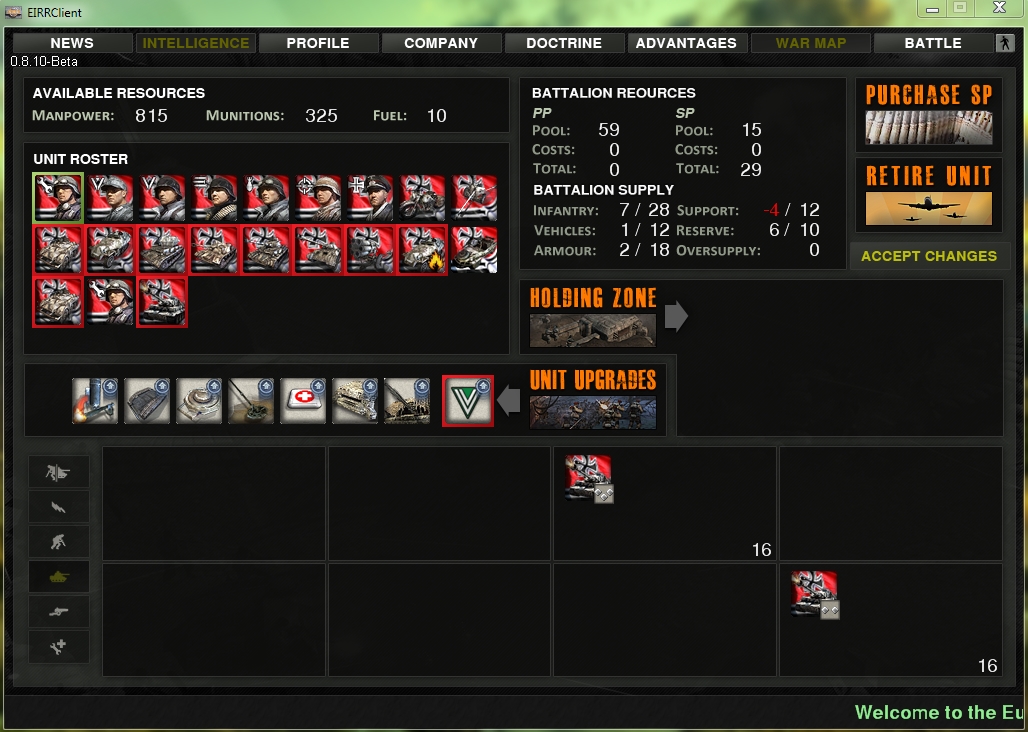 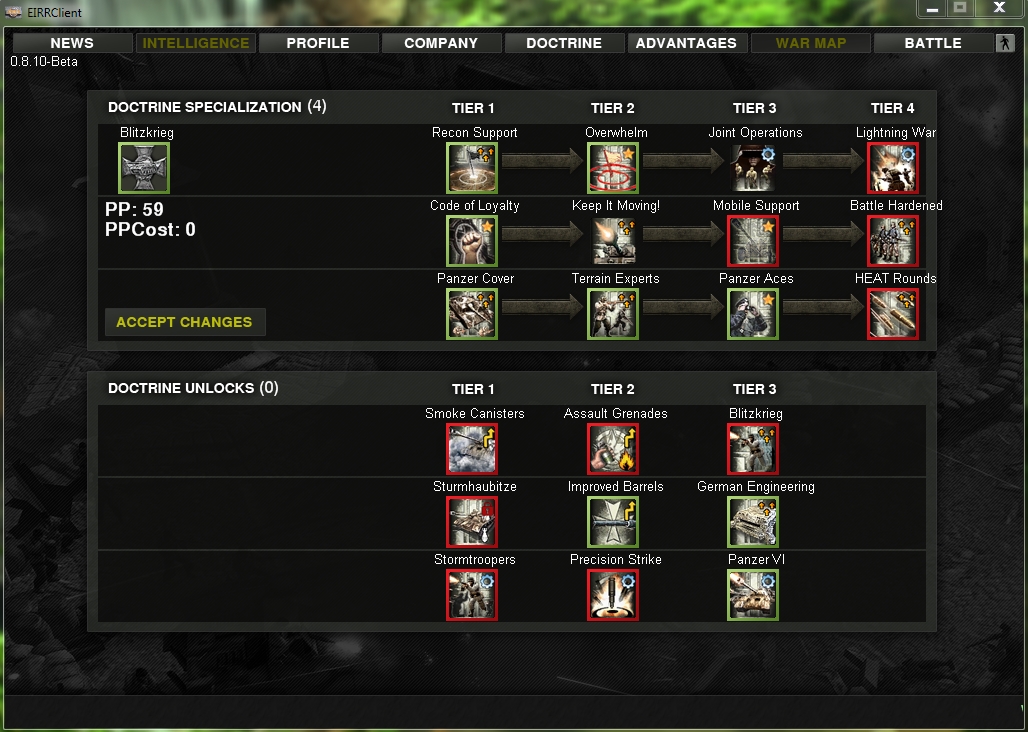 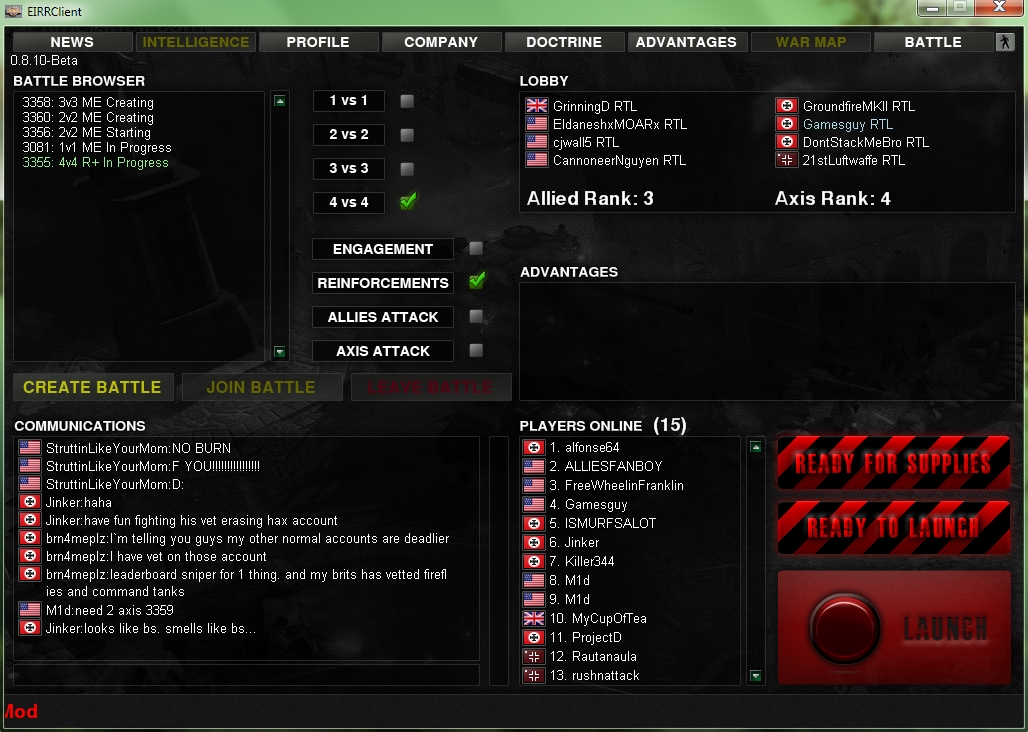 Europe in Ruins is an ever growing and expanding modification, with a very loyal and passionate fan base. If this modification interests you, or you have questions about how to play then don't hesitate to hop on to our discord server. Development is ongoing, with frequent content and bugfix patches, and have a plethora of new warmap and gameplay changes in the works for future content updates.

Europe in Ruins: now on Steam

Europe in Ruins is still alive and kicking and was recently made available for direct download on Steam! To download the mod, simply head to: Store.steampowered.com

We are still seeing active development, having just released an updated development roadmap that sets out an array of new warmap and gameplay changes in the not too distant future. We also have a dedicated community that is still playing the mod on a daily basis, meaning it should be easy for anyone to jump in and find a game at most times of the day.

Join us on our discord server if you'd like to stay informed about the mod, have questions about the mod, need help getting started or are simply looking to find some people to play with.

Looking forward to seeing you on the battlefield!

Hey guys, The Europe in Ruins team has released a new patch! This patch has some new game content and allows for Steam compatibility. Download the mod...

Well gents, it's been along time coming, but the Europe in Ruins Warmap has been released for beta testing by the community. Everyone in the community...

Skaffa, one of our resident vCoH experts began producing some of his own strategy shoutcasts.

Europe in Ruins: Build-up to the Beta

Hey guys, The EIRR warmap beta is getting close, dont wait till the official release , get into the war now and receive exclusive reward units for when...

All units viewed here are the only ones that have been changed, there are still many vanilla units they I have deem necessary to keep to support the theme...

Including a complete overhaul of the in-game skins, even down to the goliath this time. Not really, nobody cares about how the goliath looks, it's just...

Error report the axis transport truck for the defence doctrine has 0 population.

Thanks for reporting these! We only recently fixed our mod DB access so just to make sure we see bug reports I would recommend you join our discord server and you post them in the dedicated bugs channel.

Hi everyone!. i am one of the modders and PR people for Europe in Ruins.

I am so glad many of you enjoyed our mod. we would like to hear from you and continue to make this one of the most unique mods for Company of heroes. feel free to visit our forum and send me a message there or send me one on Mod db.

we also have a discord. my forum name is Bolt feel free to message me about anything at all. Happy hunting!

CommanderLVJ 21hours ago
So firstly I saw this mod on steam in a purely curious search for any mods for company of heroes that would be on steam and learned about it on there and would strongly suggest you make an article on mod DB to inform anyone on here that the mod is now on steam. With that out of the way I just have a couple of questions:

1. Could your team please make a comprehensive video on YouTube explaining and talking about this mods gameplay mechanics and overall features? (I ask if only because trying to find information and instruction about the mod is at present an absolute nightmare.)

2. Will the soviets be added to the mod and will there be more content such as minor factions (perhaps in the form of say a Canadian or Italian doctrine) more units or base structure/fortifications or whatever content there could be in general?

P.S. If you and your team were to add some stuff just remember that you may be able to work with people who made mods such as eastern front and or Europe at war and that while (I am not a legal expert.) there is always fair use copyright law which states something along the lines of: that so long as you or whomever do not try to take credit for or profit from “thing” whomever is free to and may do with “thing” what they like.

Thank you for the feedback, CommanderLVJ

Love the idea to do a video like that so will suggest it to the rest of the team to see if that's something someone would be able to take up. We now have the main features of the mod detailed out on our steam page but a video would be a nice addition.

Expanding the mod to include soviets is something we may do in the very long term, but it's a big undertaking and we have limited developer manpower at the moment so would have to see whether we can bring on some new people first! Regarding models and such, we do make use of lots of the awesome unit models for COH that community members have developed over the years, with credit to the original creators of course. Some of these are featured as 'reward units' which you can get as cards after each game.

Hello. Happy to know you're there. Can you make this mod playable also in single skirmish? Good work.

Hello! Thanks for checking out our mod. A fully fledged singleplayer feature would be quite challenging to add due to the nature of the mod (injecting code into the base game and our focus on the online war campaign) but we are looking at offering some sort of practice mode for new players to take their newly built companies into a battle against waves of AI enemies. Just as a way for users to get a hang of the game and its mechanics.

Multiplayer
Tags
Embed Buttons
Link to Europe In Ruins by selecting a button and using the embed code provided more...