One Man With Knife

The main purpose of this mod is to give the player only one weapon, it is Knife. You will be able to play the Half-Life 2 and Half-Life: Source campaign with only knife available in your arsenal.

Here is a game main menu. 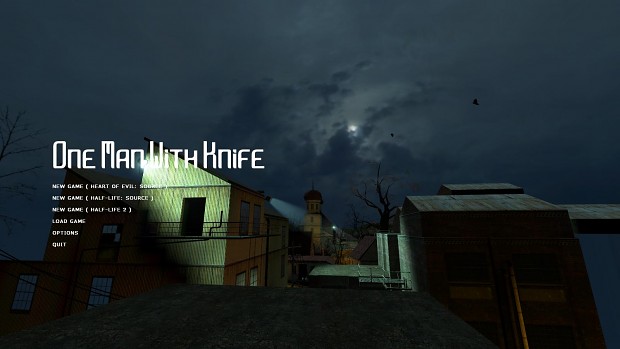 Here is a video about some test.

The main purpose of this mod is to give the player only one weapon, it is Knife. You will be able to play the Half-Life 2 and Half-Life: Source campaign...

The main purpose of this mod is to give the player only one weapon, it is Knife. You will be able to play the Half-Life 2 and Half-Life: Source campaign...

bro the knife is reskin of the crowbar

Because everyone that actually has a brain knows that Aulovs mods are mostly: low effort [Like the one above], stolen or unnecesary and made without permission [Source ports of mods that don't need source ports]. It doesn't help that he keeps abandoning his previous mods over and over again to start making another one like those ones never existed. He was banned for this crap before but I guess thats not enough for him to understand that everyone wants him gone. I wonder how long it will take him to abandon this one and start another. I bet his next mod will be "Mod Source Port that nobody asked for no. 97424"

why are you so butthurt over what someone makes in their free time? he doesn't hurt anyone, just let him make mods if that's what he enjoys.

He's using stolen assets and he gets away with it.

i don't see anything that is stolen in this mod.

Not in this one [I think this is the first time he made a mod without stealing anything]. The rest of his mods though... This is where the fun begins. I still adore that he stole an entire mod once on his old acc and said it was his. This was the moment when I knew he is going to be a pain in the *** for the entire HL2 Mod Community.

aulov actually has passion for modding, something that HL discord trannie modding community doesn't have. if aulov actually used something from other mods he always gave credit, unless he forgot which is just a minor mistake. you are full of hate towards someone that makes unpaid mods in his free time. i don't think his mods are the best but it doesn't mean he shouldn't be able to mod, it's not a contest after all. he doesn't sell his mods, he doesn't trash-talk other modders either. and yet, you're eternally triggered at him because you're either bored or you just can't stand the fact that someone makes something that you're not interested in.

Listen here ma boy, Aulov is cringe and a disgrace to sourcemodding community and the russian part of it. Porting some mods to source doesn’t give anything besides cooler water and physics. Also this is the only time he made something that is not completely stolen, but still this is zero effort, unplayable ****. I am also an alone russian developer and still capable of making mods.
Аулов, или делай нормальные моды, или пиздуй с этого сайта и не позорься.

Listen there, you don't hate someone because you are bored, but most of Modding Community despise him for multiple reasons that normal users simply don't understand, Aulov never had passion or willing to create something that's NOT STOLEN. He never had the willing to create original content, and iirc there was a time when he was whinning that "It's hard to mod in Russia" like, how different from the rest of the world is? If you are here to lecture us why to not hate a person that steals assets and codes, be in our shoes and see how it is.

i would never imagine that a man making mods can anger this many people. the code for valve games was leaked some time ago and when he used other people's assets he credited them. what will you do, downvote me because i don't agree with you? downvote anyone who DARES say ANYTHING positive about evil aulov or his mods? if someone had a problem with him "stealing" then his "stolen" mod could be taken down, but it seems like no one has a problem with that. you are like a furious crowd attacking aulov, his mods, and everyone that speaks positively about them because aulov bad.

His mods won't be taken down because ModDB moderation is iffy at best.

You probably didn't know that The Specialists ModDB page had the URL changed to the website of a server that offered a cracked version of HL, and that server had "game" set to "valve" instead of "ts" even.

It got fixed now, but it took several days and a few Twitter and Discord messages to fix it.

So, I can say ModDB's moderation isn't perfect.

Do you think this will be taken down? Mods that steal stuff isn't really good modding practice and we know that mods which steal stuff are usually left alone on this website.

Granted, this mod is OK compared to the other mods he has uploaded, but still, he keeps making mods and leaves em unfinished.

Also, there is not a lot of effort in his stuff.

I don't think you like low-effort stuff, although I might be mistaken.
He's got passion for his mods? No wonder. He makes small changes to an existing code base and releases it as another mod.

Why don't you try repackaging all HL2 maps and all CS:S models and call it a mod?

You know, when I was in the MMod Discord with you, you were busy arguing with someone about how Nikolay Aulov's face was photoshopped on the Overcharged background files, because your sources were never wrong.

Overcharged is a terrible excuse for a mod for you, even though it packages a few tons of stuff that is actually new, along with new features, even if they are not good. But this is perfectly fine, yes, this is cool.

[NOTE: The Overcharged thing was a troll it seems, ignore that part.]

"HL discord trannie modding community"? No passion for modding? Why the hell do people make mods then? Just because they want to crap something out and leave?

Bored? Oh, am I supposed to laugh? Seriously, bored? You think we got time to waste being "edgy as ****" like you and your bunch? Syph0, SellFace, The_Guardian, and I are all working on mods. We got no incentive to be bored.

Man, at least give convincing and factual arguments. That way there'd at least be some indication that you have a personality beyond "edgy, cool, against popular opinion"

the "leaked" overcharged build was a troll if you didn't realise it yet. i probably wouldn't care about overcharged at all, even if it's bad if not the fact that one of their devs trashtalks other mods.
"No passion for modding? Why the hell do people make mods then? Just because they want to crap something out and leave?"
i think you're forgetting that modding is not a competition of who makes a better mod. there are better and worse modders, there is no reason to hate someone because he's not a good modder. if you genuinely think that modding is only about making triple-a tier mods then you're wrong. aulov just makes mods for fun and shares them online should anyone want to play them. there is absolutely nothing wrong with that. the "popular opinion" isn't always correct either, but you obviously can't stand the fact that someone can have a different opinion. everyone that disagrees with you is "edgy".

I'll ignore the overcharged thing since you said it was a troll, so yeah, gotta give points it was funny for a bit, with that Aulov face and all and illegy being baited.

I never said modding was a competition, isn't modding something people do in their free time and because they want to create something, their ideas, what they would like to see and change in their favorite game?

I'm not anywhere close to the triple-A mod skills, but I can make the best I can, and leave, maybe update it after some time to make it better. Aulov makes mods for fun, yes, I believe most people make most because they find it fun, there is nothing wrong with that and that alone.

This guy has videos of him playing one of his own mods where all his personal details are included, full name, home address, along with VK profiles of girls that he likes. Just check his Opposing Force: Source mod out. And I think it's even a little broken in some places, although it has been quite a while since I played.

He's stolen a mod, packaged content that should not even be packed together(like I said, entire HL2 and CS:S assets were packed once), made several mods where he gives out personal details of some random women. Seems like stuff you do for fun, stalking women.

Now, it's fine to use models, no one complains. Maps, while I believe Valve permits it, it's frowned upon, because honestly, why not make your own maps or not make any at all?
Haven't we all played the original maps to death? So you could maybe make something small, or not make any maps at all, but why pack the original maps? Bugfixes and improvements to the maps are perfectly fine, but not just straight-up map copying.

Popular opinion isn't always correct, we both know that.

If I couldn't stand the fact that someone had a different opinion, I wouldn't be here, but let's not speak more of that.

Say what you want about Overcharged, but at least the developers don't use audio from a tragic/shocking event and/or sympathizes with the perpetrator of said event.

Yes I'm referring to one of the sound designers for MMod using audio from that Mosque shooting in New Zealand, and sympathizing with the arsehole waste of oxygen that did it.

Holy ****, that’s sick, what ingame audio is that? I’ve never had thought of that.

I just double checked and he actually didn't end up using audio from the shooting.

Still, the fact he was going to and that he sympathizes with the shooter is pretty disgusting.

Single Player
Tags
Embed Buttons
Link to One Man With Knife by selecting a button and using the embed code provided more...