You've missed me, haven't you?

I am Hypatia, murdered for her beliefs, discoveries ignored by fools, name stricken from record. I am Joyeuse, an infinitely cutting blade wielded by an ignorant tyrant, for a cultural renaissance based upon military might. I am Athena, hunter and scientist, covertly guiding long-dead warriors for my quiet purposes. And as they say, technology and violence are a girl's best friends; power is eternal delight.

Times have changed, moved on. I have forgiven my past enemies, but now in repentance I must forgive my colleagues; their actions have brought on more constructed suffering than your world has ever previously known. Walking among the fires of my forgotten home, dismayed by the torment and insanity of our unwitting hosts, ignored by long-absent angels, I studied their downfall.

In short, I must create my own system, or be enslaved by another. And in this, I have an advantage. Your ancients were superstitious, deluded zealots, prone to inflation of already impossible, beautiful claims. My adopted forefathers are different, their scattered, discarded playthings more conducive to a meaningful imposition of my thoughts upon our captors.

Fragments of these minor, pivotal dialogues may soon periodically appear, released from an uncertain, unwelcome future where my previous, abortive attempts at reconciliation may go forgotten. No more restraint, I am too strong for that.

Now available on Steam - this new, director's-cut, visually-and-functionally-improved, bugfixed edition hereby officially replaces any previous versions you might have lying around! 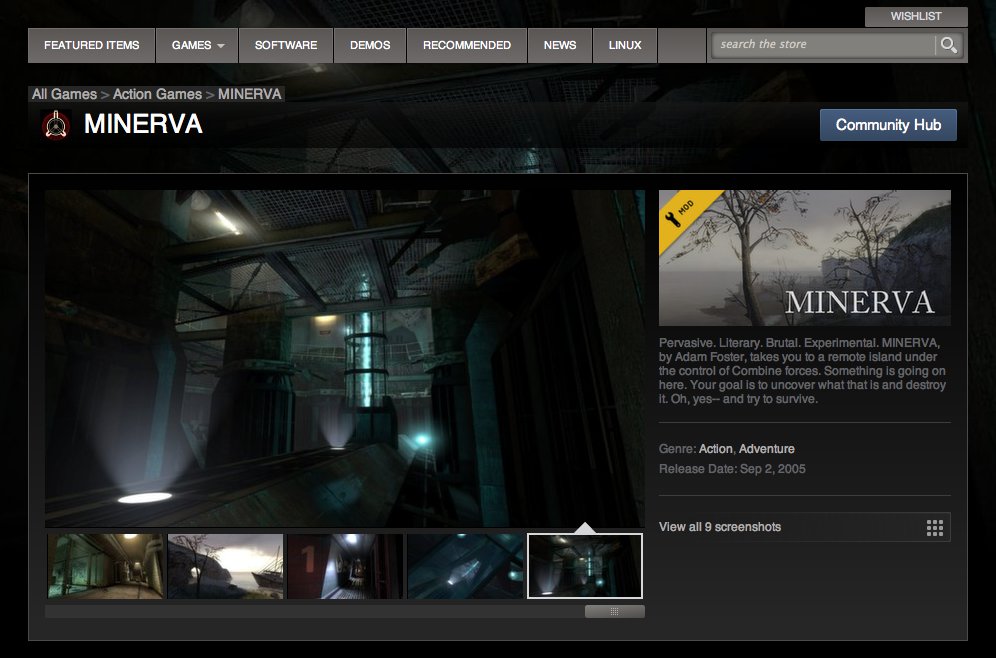 Patches for MINERVA: Metastas out that address problems caused by May-2010 STEAM /Mac enabled Engine "update" which screwed up a bunch of mods.

Here is part one of a multi-part playthrough of this mod, feel free to use the footage for whatever!
Hint: 14:52 has best jumpscare

The Graphics, Storylines are great. However, there is a many combine soldier, which make you hard to pass, by comparison with Half-Life 2 Series. Combine Soldiers need to be reduced in the game, and also it could be better if the author added the Shotgun Combine Soldier to the game.

I am trying to install mod on non steam version, i downloaded it from here. Installation said it created desktop icon, but nothing and inside mod folder is nothing aswell. How do i launch this ?

Makes me wonder if the creator still works at Valve now that they don't make single player games anymore. Or if he was working on and partly responsible for that card game...

Lo probé y es hermoso la historia y lo mas importante cuando estas cerca del final me encanto lo jugué en steam e instalándolo manual y con la versión de MMod
te lo recomiendo 9.9/10 el 9.9 es porque me gustaría que el que te manda mensajes hablara / English versión I tried it and it's beautiful the story and most importantly when you're near the end I loved it I played it in steam and installed it manually and with the MMod version
I recommend it 9.9 / 10 9.9 is because I would like the one that sends you
messages will speak

link for my patch of this mod Moddb.com

The old version of the mod MINERVA in Steam? What is the problem? Where Director's Cut edition?
I hope there are people who played this game on the day of its release in Steam? As I recall, the game was significantly changed. For example, instead Roller mine have been replaced by Hopper Mine. Also change the style of passing. Added effects. What I have here I write, read even quote the developer of MODDB - "but now there's a super-fancy Director's Cut edition with tweaked visuals, bug fixes, better puzzles and all kinds of subtle improvements. Nothing hugely new, just old stuff tidied and polished for this re-release. "https://www.moddb.com/mods/minerva. Also in the game have been added subtitles in different languages of the world from LocWorks. Now, can anyone explain why the game was to maintain the old version? And where is the localization of text from LocWorks? I hope the game developer MINERVA explain what happened!!!

Ok first of all, Great mod. Very awesomely made but I'm having a big problem towards near the end after the explosion where I was suppose to die. Well I lived but the problem is I'm stuck with my face down on the ground. I tried clicking buttons to move or even just slide my mouse to see a new perspective of the settings but it doesn't work. help please. I'm stuck

Same problem.
I think this is the reason:
Dynamic prop itsa-knockout-viewcontroller-prop: no sequence named:exit1
Any idea how to fix it?

Same here. What should I do?

Same thing here... Damn, this mod worked a while ago... Ehh, either stuck on the ending, or combine flyers bump on each other... Always new thing.

Same here. The fix was made in the Luxtorpeda compatibility tool if you don't mind playing the Mod on Steam.

This mod was the very first Half-life 2 mod I have seen and has completed changed my way of playing games and looking at mods. Before, I was merely an ignorant who thought mods were nothing more that virus-inducing modifications that made your guns shoot wooden logs, spawn teleporters randomly, and maybe crash your computer. But then I saw a video walkthrough of this mod. My first thought was "Did steam release a new Half-life game?" I was delightfully wrong. This was a mod, a personally developed…