You are the leader of a rising empire. You must conquer sectors and exploit the most strategic ones to craft your own ships and stations. Choose which faction is going to be your enemy, defend your assets, be aggressive or get overwhelmed by the pressure. Procedural galaxies and realistic economy.

Mayhem 3 comes with an external tool that allows you to generate an infinity of galaxies: 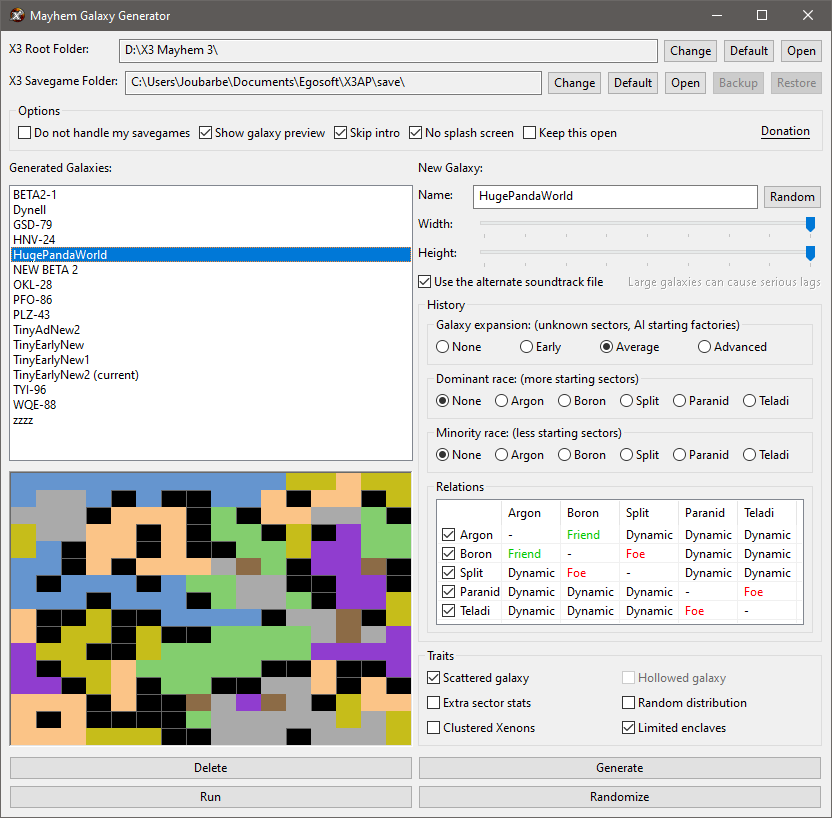 The economy in Mayhem 3 is unstable and unpredictable. This is mainly because the war can go to any sector at anytime, and a sector that was a good base for trading can quickly become a nightmare for your traders and others. The AI has been designed to adapt to those changes and will continue to trade with you if you allow them. Besides, they will frequently rebuild their stations based on their current needs. All of their ships are "real", in a way that they're all synchronized and carry resources that are used to craft ships, stations, lasers, etc.

In Mayhem 3, there are no artificial ships. They're all built at an Outpost from real resources. The vanilla "job ships" system has been completely removed and replaced by custom scripts written from scratch.

In Mayhem, resources such as Teladianium, Rastar Oil or Computer Components, are more important than ever. They are used to craft ships, missiles, lasers, shields, and stations. Having a full self-sufficient chain of production is challenging.

The universe of Mayhem is chaotic by nature. All factions can invade any sector, and you are just a tiny empire compared to others. Sometimes truce can be signed between two factions, but most of the time, they will use their Battle Group fleets to invade other sectors, destroy everything, and rebuild the stations they need the most.

All sectors have different statistics (max. people, research rate and factory support), so you better plan your expansion carefully before attacking another faction. But don't panic! You have plenty of time to do that. You will need that time to scan ship data that are needed to acquire blueprints, and you'll also have to grow your population, improve your Outposts, carefully select the Perks you need, etc.

Sometimes war is not the only solution. If you have a special interest in some factions, you can ask them different favors by spending favor points that you acquire by destroying specific targets, or by declaring a permanent war against a common enemy. Plus, you can buy sectors from your starting faction to expand easily and to try to compete with other factions.

In Mayhem 3, you have six main automated ships called Workers: Agents, Explorers, Looters, Miners, Traders and Tugs. Having Agents and Traders to manage your factories is crucial. You will have to plan your logistics in advance, trade with other partners, specialize your sectors in manufacturing specific wares, and make good use of the new job system. Building a well-oiled logistics machine is hard, but very rewarding.

In Mayhem 3, there are procedural missions that replace vanilla ones, an Ascension phase that asks you to complete some achievements, but other than that, it's a full sandbox. You have non-cheaty ways of controlling the world and make each universe a different story!

Mayhem 3 has been in development since December 2019. It has mostly been a full time job and is today a robust mod, fully playable, and replayable!

I've started modding X3 in 2014 after the release of Litcube's Universe. Mayhem 1 began one year later with the very primitive idea of making it possible to conquer new sectors. I've always loved games where territory war is an important element of gameplay, it gives replayability and an experience often more intense and more customizable than story-based games.

Mayhem 2 was a total rewrite. I had understood that conquering sectors is not only about changing the race of a sector, it's about all the consequences and the price that you and the AI have to pay to achieve it. I also wanted to not make everything orbiting around money, so I've implemented a way to craft your ships, stations, weapons and equipment. I've developed Mayhem 2 for about 4 years (part time, obviously), but at the end I didn't want to play it anymore because of some important problems I had with X3:

I've spent about 6 months on the development of Mayhem 3. It has been a very intense adventure for me, as a developer, not knowing if one day, I wouldn't face an engine problem that would crush the whole project. At the beginning, I was just facing an empty galaxy, so I had to make some golden rules:

When starting Mayhem 3, I knew I had to have my own Jobs system, but I didn't really know how tedious it would be, because in the end all combat scripts had to be rewritten, and whole new systems had to be designed to make the AI lively and real. And by "real" I mean that the AI has to know what it wants, at what moment, how to build the proper stations and economy to sustain its goals, define the objectives of its fleets, and adapt all the time to other AIs, the player, and the permanent threat that are the Terraformers.

Mayhem is slower than X3 and Litcube's Universe. There is no jump drive, because in a game of turf war, being able to instantly teleport your ships makes no sense. In Mayhem, you get a true feeling of what attack and defense mean, even though you are eventually able to create "bridges" between sectors, with the help of jump beacons.

Although it is a very complex mod, I feel that Mayhem has never been so friendly to new players. There are a lot of menus, but I've tried to simplify most commands and I've removed many features that were feeling too arcade. In other words, it's supposed to be more intuitive than Mayhem 2 and LU, and the fact that all systems are realistic plays a great part in that goal.

That being said, it's important to understand that Mayhem 3 is not easy, and will never be. It's designed to be hard, and it's started as a cruel unforgiving "Dark Souls In Space", but made a lot easier in late stages of the development. Still, be warned, don't expect to be told what you have to do at every step of your journey. There is a lot to learn, and a bit of "die and retry" goes very well with the procedural galaxies :)

So, all in all, Mayhem 3 is about two things:

I'm not going to detail everything I've already said before on the main page (click "Read More" on the right) and in an old article I've posted after releasing the alpha.

Mayhem 3: How To Install?

Install instructions of Mayhem 3 and all its dependencies.

What to expect from Mayhem 3? (Old)

A brief presentation of the most important features of the next incoming major patch.

For compatibility purpose only. This is not the latest version.

Trans-Orbital gate model to replace the standard one. Only replaces the visual model.

Hi everyone.
There are questions for version 3.5
When choosing a start for beginners, they give a quest to the watercolor 10 honors are necessary.
And how to get these very drawings (if there is no data scanner on the launch ship).
2 Question - not available tab with operation ship commands.
Where are the merchants, miners, etc. Does it still wake up not available or will it open after passing quests?

Greate mod, I really love it. I had no problems with it and await the new updates that you will bring.

The game instantly crashes in Linux when starting a new game when choosing any of the five races. Could just be the recent patch messed it up, dunno.
Mayhem 2 worked perfectly in Linux.

Hummm. what can do at starting? no outpost, no quest(it seems), no UT, no shipyard for selling ships.

As a fan of mayhem, i only hope you support a easy-translation tachinique or tool. im a programmer so, it's very okay using IDE.

Hello, first of all great mod, thanks for your hard work!
I was wondering, if you consider Mayhem feature complete. Didn't find any info on it, and if it isn't, do you have a roadmap somewhere, what features you plan on adding aside from the tweaks and fixes you keep continously doing?

The development of Mayhem has always been "chaotic". It depends on my mood, and I've changed many things in 4 years I wouldn't have imagined. Mayhem in its current state is a strong and robust mod, that you can enjoy as it is.

I have a giant TODO list, with ideas and suggestions I either have myself, or I read on the forums or Reddit. But I don't have a roadmap, and right now, I'm focusing on another project (unrelated to X3).

That being said, a very distant idea would be to implement random universe generation into Mayhem. Obviously a lot of work.

This is THE mod that you need to fill that gaping void in your heart. It is a comprehensive total conversion mod that takes the vanilla X3 experience, and turns it into something refreshing and fun. In this mod, you play as a survivor of the Sohen race. You start with a Sanctuary in a remote sector, and are tasked with saving your people, and rebuilding the Sohen presence in the universe. The gameplay balances around this special Sanctuary station. It is the primary means for which you can (EASILY…