Mars Wars 3 is an Unreal Tournament 2004 modification to remake the classic title, Red Faction. It's a first person shooter, played in gametypes such as DM, CTF, RailArena and many more. Main focus is the gameplay. We're trying as hard as we can to give you the perfect gameflow you're expecting in a high quality mod such as Mars Wars.

The newest version of Mars Wars puts everything onto the next level in MWs era. Online play is much more stable and weapons are absolutely lag-free! In Mars Wars you can expect to experience one of the best FPS-multiplayer experiences ever seen in a mod.

Make no mistake, this mod will be different from other UT2004 mods.
Online- and offline play against fully functional bots!

2new patches are out.. that means, new characters, new weapons, new maps and tons of bugfixes/tweaks! 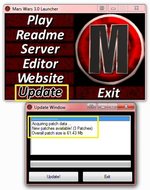 Hit "UPDATE" and the new patch will install automatically.
Then go and take a look for recent MW servers. ;)

Mars Wars 3 released on March 13th. Initiates the fragging on Mars once again!

Facts/news about the upcoming version of Mars Wars.

Screenshots update for Mars Wars 2.1. Showcasing new maps as well as updated ones. Also with a first peek of the new Menu that v2.1 will have.

Mars Wars is back, and better than ever! A remake of Red Faction If you like it, spread the word! :) Mars Wars 3 is the result of 3 years of work - with...

A small but nifty mutator that turns some MarsWars weaponry into fireworks!

Skip all the small patches with this big one. 1st - 4th patch for Mars Wars 3 Revision1 to Revision5 click on read more to view the changelog

Second patch for Mars Wars 3. Click on read more to view the changelog

if possible is there any way you could make all the EDF skins from redfaction guerrila for ut2004? would be cool

How does one enable the geomod effects? I see no destructability in maps.

Is there a chance that you will make a remake of RF singleplayer?

I've installed this in the past with the Steam version of UT2004. When I try to run it, I get an error that says that my CD Key is invalid. What should I do?

I want to know too

Do you get this same issue when attempting to run vanilla UT2k4? Try deleting UT2004.ini.

pressing update at Mars Wars 3.0 Launcher says:
Error reading Patchlist.txt to Array, Check your network connection or contact site for details.
how to fix that ?

Because that is no longer available. All you need is the game and Revision1 to Revision5.

Great work! Are there any plans to make a mod Red Faction2?