Mars Wars 3 - It's out! MarsWars is an Unreal Tournament 2004 mod to remake the classic title: "Red Faction" which has been released for PC and Playstation 2. It's a first person shooter, played in gametypes such as DM, CTF, RailArena and many more. All weapons have been re-created and improved in detail. Characters, levels, even vehicles. We're trying hard to give you the perfect gameflow you're expecting in a high quality mod such as Mars Wars. Online play is much more stable and weapons are absolutely lag free (projectiles don't delay)! Meaning, if you fire your gun and you hit something on screen - it's a hit. In Mars Wars you can expect to experience one of the best FPS-multiplayer experiences. Especially a lot of fun with friends on the Invasion gametype. Try it out, it's free and easy!!

Mars Wars is back, and better than ever! A remake of Red Faction If you like it, spread the word! :) Mars Wars 3 is the result of 3 years of work - with the biggest focus on good gameplay and feel. Hope you enjoy your stay on Mars. This is the newest version (revision5) in a ZIP FILE. No more patching required. Install into your Unreal Tournament 2004 folder and play! 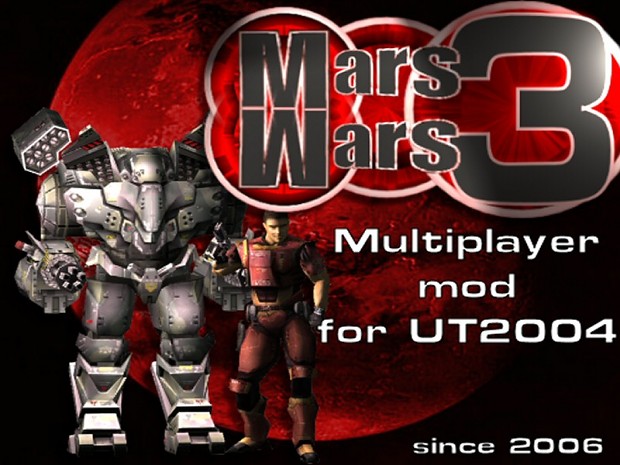 Whoaaaa you're still working on it.

What a pleasant surprise! :)

Oh no! Now I must have been confusing you guys (and now dissapointing, too). I have only uploaded the fully patched version since we've always had to download V.3 + the patch seperately.
To avoid confusion I shouldn't have added the "2018" to the name.
I think a few people have never patched the version3 to latest "revision5".

But I'd love to keep this mod going.
SGT Tanker has been working on many maps after the release of MW3! Hello! :-D
Have a happy new year everyone and thanks for so many nice comments already.

This project has come to a stop since everything became old about it and most people have lost interest...jumped on other games... well including me.
But I remember it was such a good time to work on the mod and play with the people. Hah...even playing with the bots is fun. :-P It would have been ultra cool if I could ever find a super good programmer for this project, to fine tune a few things. Or how about some modellers and mappers who could do some more remakes of Red Faction maps and stuff ... :o

Mars Wars is always fun to come back to from time to time. Since there's been no activity or updates for a couple of years, I kinda understand it's time to move on to other games.
Thank you RED-FROG, for all the random fun in invasion. :)

Thank you for that single file download that's great :)

About mod, you did really great work!

Also here some models which I extracted and uploaded as modder resource: Gamebanana.com

most mods kind of require ECE patch so ...

if possible is there any way you could make all the EDF skins from redfaction guerrila for ut2004? would be cool

I wanna Red Faction 2 Weapons in UT2004 Here not all weapons: Gamebanana.com

And Here En.ds-servers.com too not all weapons.