A Note From the Author:

At the time this mod was originally released in 2012, there were virtually no existing mods out there which improved on the trading system in Shadow of Chernobyl in a realistic and practical way, they were either lazy renditions of the original game's trader inventory, or they were outright cheats that unlocked all of the weapons and armor found in the game, and made them too easy to afford. After considerable frustration with the way the vanilla (original) game had played, I decided to create my own mod which would completely overhaul the traders and add more variety and immersion to the experience.

In the original unmodded game, the traders would always offer weapons and armor that you didn't need because you already had something better by the time they were unlocked. And it was hard to stock up on ammo because they would barely have any in stock, or even none at all. After weeks of thinking over how to balance the games trading system, I added and tested hundreds of new items, how much they would cost and sell for, and from whom specific items would be offered to make each trader in the game feel unique and worth the trip to visit more than once or twice. Traders now have a huge variety of items available, and none of their inventories are in any way similar. Prices, availability, and the value of items all vary greatly between each trader. However, it should be noted that the items which were added to the traders will not always be available, they are slightly randomized and the player may not always be able to find the specific suit/weapon they're looking for. In Hal's Traders Overhauled, the traders should now feel more unique, they buy and sell what they want based on how relevant the item is to them, and by the area that they are located in. The zone is now a much more economically diverse place for Stalkers from all walks of life.

An illustration of what some of the traders' inventory looks like in HTO can be seen in this image. 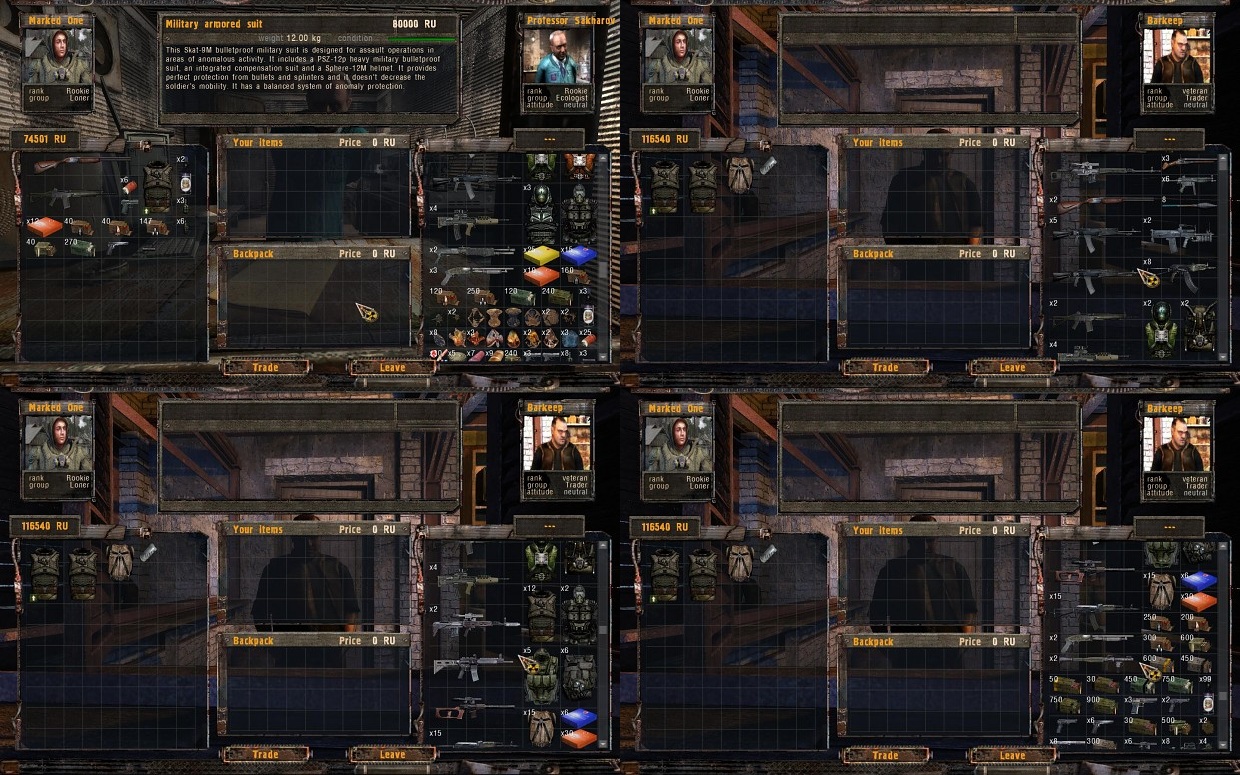 The LITE and PURE editions of my mod found in the downloads section contain a separate folder apart from the base trader files folder which include the following mods below.These mods complement my mod very well but should only be used if you are going to play the game with your own merged compilation mod pack or simply in Vanilla (unmodded game)

( All are from Stalker.gamefront.com, which is no longer in service)

Axes Repair Mod by AxeMan808, MoDD, and Goffik
This mod allows the traders in the game to have the ability to repair your weapons and armor, the price it costs to repair gear is the same throughout all 4 versions of my mod, so using this mod may decrease the realism and possibly the difficulty of the game, since instead of having to purchase a new weapon you can just repair your old one. Use this only if you don't care about possible decreased difficulty.

STALKER Real Gun Names mod v.3 by Kyodan
Changes all the original weapons in the game to be based off their real life counterparts. Simple and realistic mod, adds more immersion.

Chernobyl_tv_v1.1 by Zero_3
Adds video from a documentary about the Chernobyl disaster to the two TV's that are in the game (one behind barkeep, and the other at the military base in Cordon). Instead of showing a couple of lousy in-game screenshots like it did before. I like it a lot!

Hades_Real_Gore_Mod_v1.0 by Hades
Adds more blood and gore to the game, need I say more.

Hal's English Retranslation is a mini-mod for Shadow of Chernobyl which expands and improves the in-game dialog/text.

This addon for HTO 2.0 features two small mods: -No quest time limits. I made this change myself in the tasks_manager.ltx file. You will no longer need...

Here it is at last followers! HTO 2.0 has been released. For more information about what it offers this time around, please refer to the readme file in...

This is the Master Edition compatible with the Complete 2009 mod. I figured some people would want it. Also, in my other download file for the vanilla...

This is Version 1.5, READ the description, it provides information about what has changed since the LITE and PURE versions of the game and what you should...

This is version 1.4, it makes the games prices and sell values more like they usually are but traders are still unique in some areas. If you want the...

I feel like a 50% increase in buying price for artifacts would be kind of OP, right? I guess artifacts aren't nearly as valuable in SoC as they are in CoP, so maybe it works out fine.

is this compatible with the repack of the 2017 starter pack?
Moddb.com

Hey man you said to have remastered every line of text in the game. Nice. I would like to find that, but I play with different language on. Feels kind of like a loss of opportunity.

Maybe you could do a region-agnostic version of your mod, that is, to remove all elements forcing particular language, be it text or audio?

all you have to do is go to gamedata/config/text/eng in your game directory and delete the entire "text" or "eng" folder. either method will work. thanks!

hey man does this mod include zrp?

No, sorry. You may be able to merge the two mods together however using a mod merging program.

final edition is compatible with complete ?

Now if Stalker is a hardcore game that this is the hardcore mode.
I am playing on Master I can't find ammo and I can't buy ammo....

Sakharov walther pistol price is enormous, but I found that you need to edit trader_ecolog.ltx file and change price in [ecolog_after_brain_sell] section from wpn_walther = 1, 87.8 to 1, 7.8. But there is one bug I cannot find how to fix. It's Petrenko, after RG6 missions he stops selling items, just some ammo that's all. How to fix that?

It may be the rare case that all of the weapons didn't make it in, every trader only has a specified chance of selling certain weapons and other items. This should be noted in the files with a decimal number between 0.0 - 0.9, with 1 being 100% that they will have it for sale. Other users of the mod have reported there being no items but when they went back after waiting a bit they started showing up. It's very randomized. Thanks for pointing out the Walther price too.

I am using yours original mod files downloaded from moddb, without any changes. I always come back to Petrenko to see if he has something, but no luck, just ammo. Tryed reloading my saves - same stock. Even started new game, but problem still appears.

Are you using any other mods?

Mhh, only Zone reclamation project. But can it be the problem? Because before duty rg6 mission done, Petrenko sells items just all right. I should test it alone without zrp..

Yeah do that and tell me what happens.

If you aren't satisfied with this answer feel free to email me a copy of the trader file for Petrenko, it should be titled dolg_trader.ltx or something like that. I will compare it to mine and see if something is off. christianlindstrom906@hotmail.com