An enhanced version of the original GoldenEye 007 on the N64, modding Rare's First-Person follow-up Perfect Dark. Relive the magic of GoldenEye, now with brand new features and upgrades. Hear the sounds of the surface beneath you as you walk, watch the snow fall in Severnaya, battle enemies over and through railings, splatter blood on nearly everything in sight, attach mines and knives to an opponent, play mutiplayer with up to eight computer controlled Simulants, have a second player participate in the mission campaign (either as a friend or a foe), listen to characters speak with voice-overs, tackle new scenarios in multi (including Capture the Flag and King of the Hill), have greater control over your options and character choice in multiplayer, and so much more! Plus, through the advancements in emulation, play online against your friends with Mupen64! This is GoldenEye... Like you've never experienced it before.

Over a year has passed since the last public release of GoldenEye: X. Now, we proudly bring to you, the newest installment; Patch 5a. Since 4a, we've been working hard to improve the overall quality of the mod, as well as including new materials. Weapons were a primary focus this time around. Many more are now available, they're in the correct order, and previous firearms are using their proper firing rates and muzzle flashes. Menu colours are also new. Instead of the blue that you've been used to seeing, you're treated to a much nicer green colour. Simulants have become even more intelligent this time around. They now know the best ways to utilize their weapons, at which distances to keep from their opponents, when to go get more ammunition, how long it takes to reload, and what firearms are more deadly than others. If you thought they were tough before, get ready for a real challenge. And speaking of challenges, the 30 Assignments are all setup. You'll experience a wide range of scenarios, face off against Simulants of increasing difficulties, and play all the classic GoldenEye maps in brand new ways. As a special treat, bringing one of the most treasured beta aspects back to life, All Bonds are playable in VR mode. Your favourite 007 actors from the historic franchise are just waiting to get back into the thick of things. There have been so many little tweaks and updates, that naming them all here would take too long. For more information on those, please check out the list below. Once again, we deeply appreciate the support of those who have been anxiously awaiting a new release. Thank you for sticking by us, and for taking the time to play this mod.

You can download the patch either here at Mod DB, or at the GoldenEye Vault website
(www.goldeneyevault.com). If you are unsure how to patch your Perfect
Dark v1.1 NTSC ROM, please refer to the FAQ section of the same website.

Here's a trailer featuring the game in action. Thank you, and enjoy the mod.

Head over to the GoldenEye: X channel on YouTube for more videos!
Youtube.com 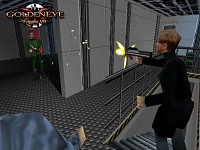 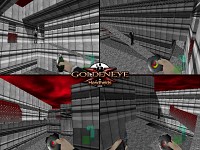 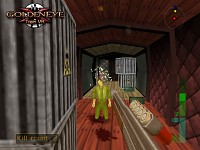 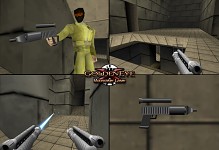 - Newest additions have an exclamation mark (!) tacked onto the end

notes:
Temple, Complex and Facility are the originals from GE, not the Classic versions found in PD.
Frigate has been modified and optimized to run well in multiplayer. May not remain in future versions.
Bunker ii doesn't have the ceiling mounted monitors.
Train is now available to play in multi. May not remain in future versions.
Caverns currently has a weird visibility issue at the windows that look out to the exit bridge.
Caverns has some issues with the eyelid doors for both Humans and Sims.
Citadel has been updated by Sogun, and features an Aztec temple theme.

notes:
Sims may have trouble using some weapons in certain situations.
*The ported guns have out of place muzzle flashes or exit points, which will need to be remedied.
**Mines, grenades, and knife now feature their own first-person, in-hand models.
***The shield effect has been removed from the game, so it acts more like armour.

*The Point of Views for these characters are off. Until we determine exactly how they are setup in PD, the stock heights chosen will have to do for the time being.
**These bodies weren't available normally in GE, but were leftover in the ROM

notes:
*These five heads have had their sunglasses forced on for VR mode.
You may notice these heads appearing throughout the missions. However, they are not currently setup to wear sunglasses.

notes:
*These basically just swap the Briefcase model for the Flag Tag Token.
**Hacker
Central modified. You must procure the GoldenEye Key and use it on the
terminal to upload firing commands. Whoever uploads the most by the
end of the match (or reaches the goal limit) wins.
***Pop a Cap modified. Same exact rules, just different terminology.

Notes:
Certain instruments or sounds may be slightly off from originals.
Jungle is the original theme intended for the stage, not the background sound effects.
Silo X has been removed due to the song not looping.
End Credits have also been removed, since it wasn't in the original.
Elevator songs 1 and 2 have been brought in as a replacement for the other two.

Eyelid Doors in Caverns:
There's a few issues with these. Simulants have trouble opening them, and often run in place in front of them. Also, if you crouch down, it's possible to actually walk right through the lower door. We're trying to figure this out, but weren't able to in time for release 4a.

Simulants:
Since the first release, every map has been fitted with an AI Path Network. This means that Simulants can freely roam the stages. Also, extensions and drops have been worked into most levels, improving Sim navigation. They are also much smarter when it comes to weapon choice and utlization.

Martin Hollis, 008 Simulant Partner:
Currently has female voice files during missions. These will need to be replaced with male samples.

Headers/Dividers:
Because we wanted to have everything (or mostly everything) unlocked from the start of the game for new users, some of the menu headers and dividers may be missing. They rely on certain flags to be set in order to be shown. It should be fixed everywhere, but don't be surprised if something seems off.

Hangar Information PC:
The computer stationed in the Carrington Institute hangar will often crash the game. If you attempt to preview any of the files stored on the PC, the gameplay may freeze and you'll be forced to restart. We're not sure why this happens at this time, so you'll just have to avoid it for now.

The fourth release of GoldenEye: X has been made public. You can check out a trailer for the mod in this article, and also find a link to where you can...

The third release of GoldenEye: X has been made public. You can check out a trailer for the mod in this article, and also find a link to where you can...

The patch you'll require to play the most recent version of the GoldenEye: X mod (5a). Other details on how to patch the ROM are included.

The patch you'll require to play the most recent version of the GoldenEye: X mod (4a). Other details on how to patch the ROM are included.

The patch you'll require to play the most recent version of the GoldenEye: X mod (3a). Other details on how to patch the ROM are included.

Is this mod still in development?

It makes no sense how the Phantom is being treated as a AR when it is in fact based on the Spectre M4 which is actually a SMG.

Do you guys ever plan on releasing a online mulitplayer part of the game??? that would be famtastic

Do I need perfect dark to play this?

I get random lag. anything i can do to stop it?

They should all match their original damage percentage. The only weapon that (as far as I know) didn't in release 4a, was the Silver PP7. It was actually weaker than it should have been, but has been corrected since.

It may feel as though they are more powerful than in the original, but there also isn't that moment of invulnerability that GoldenEye 007 had. After you get hit, you're still open to attack. That can cause your health to deplete in the blink of an eye.

We're still hard at work on GE:X. There's a few more weapons nearing completion, and the "Assignments" (formerly known as Challenges) in VR Mode have started taking shape. The next release should offer some great new content to keep you playing until we get the solo / co-operative campaign going. Check back for updates, usually in the form of images, regularly.

im assuming the "source" part refers to valves source engine? then no ty