FragOut! is a Half Life 2 multiplayer mod, in which you only get different kinds of grenades to fight with, instead of the usual weapons.
Forcing players to adapt at using only throwing weapons new tactics are sure to arise!

Grenade/Pickup effects and other news

Hello watchers, Sorry that it's been so long, after about 2 months of silence we're ready to show off some new stuff! In this news post today I have some new screenshots for you and a video demonstrating some effects. First off, some development news...

Development:
There have been slight improvements in code, that should hopefully speed up some things and some simple prediction has been added to the grenade code, which should result in slightly less noticable lagg with high pings.

Both our mappers made some pretty nice effects using hammer, as part of the pickup's so they're easier to see! However even so I went on a quest to add coded effects, gotten pretty far as Nauz added attachments to all the pickups, but codewise things were pretty hard and only a simple light and trail could be added, sooo after some time I gave up and we're now keeping the cool effects that the mappers made.

There has been also alot of discussion on gamemodes, after much discussion soulfather and me came up with a interesting gamemode, but since it would need to include custom teams(demons vs angels) the gamemode will only be added after the first beta release, since it would add MONTHS to our development time, regardless that still leave's with two nice gamemodes:
Last Team Standing and Survival Deathmatch...

Last but not least, most of the grenades have been given custom explosion effects therefore changing them from the usual HL2 explosions, however as you will be able to see in the video below, the sailboat explosion is still pretty lame, if you have any suggestions for it, please post a comment. 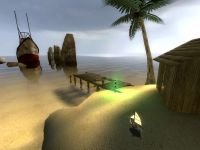 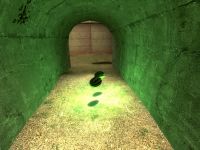 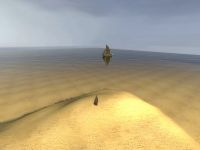 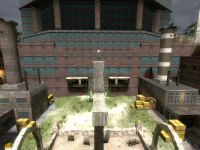 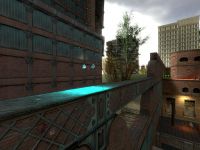 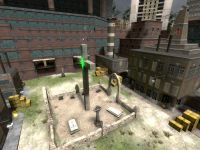 Pickups and Explosion effects video:
Here's a little video showing the effects for the pickups and explosions, we hope you like em...
If you have any suggestions for the sailboat explosion then please leave a comment!

Well that was all for now people, keep watching :D

Hey watchers, after the usual quiet time we're back with another newspost showing off new media and telling you what's up with development. So keep on...

Been a while since our last update, srry about that, not alot interesting happened, except a few very good things, read on to find out more!

Another newspost, this time some talk about ... Animals? And a preview video of the wind grenade animations AND what it does ;)

The past week has been full of development activity on the FragOut dev team and I felt it was time to let you all know what's been going on.

I want this game I WANT IT!

I would like to throw some bananas or Molotov Cocktails! Or throwing with PSP's and Chairs, that would be funny!

This looks neat, and with a Zeitgeist Developer, it can't fail.
I will definitely track FagOut!
PS: I surely mean FragOut! =P

i remember seeing this ages ago, tracking

This mod now belongs to the makers of Kreedz Climbing and will 100% see release. We will take our time optimizong what was left undone and keep you posted during this process. Kreedz still has #1 priority but this will happen dont worry. I keep my promises (not suggesting duck doesnt, he just wants to spend his attention to GraviNULL.fairly).

I am happy to take over this excellent project.

So after some discussion with Soulfather and Alt` we came to solution of having Soulfather take over the mod, his coder will be my replacement of being the coder for the project.

I'm very excited to see what FragOut will turn out under the guidance of Soulfather and with the support of his talented coder!