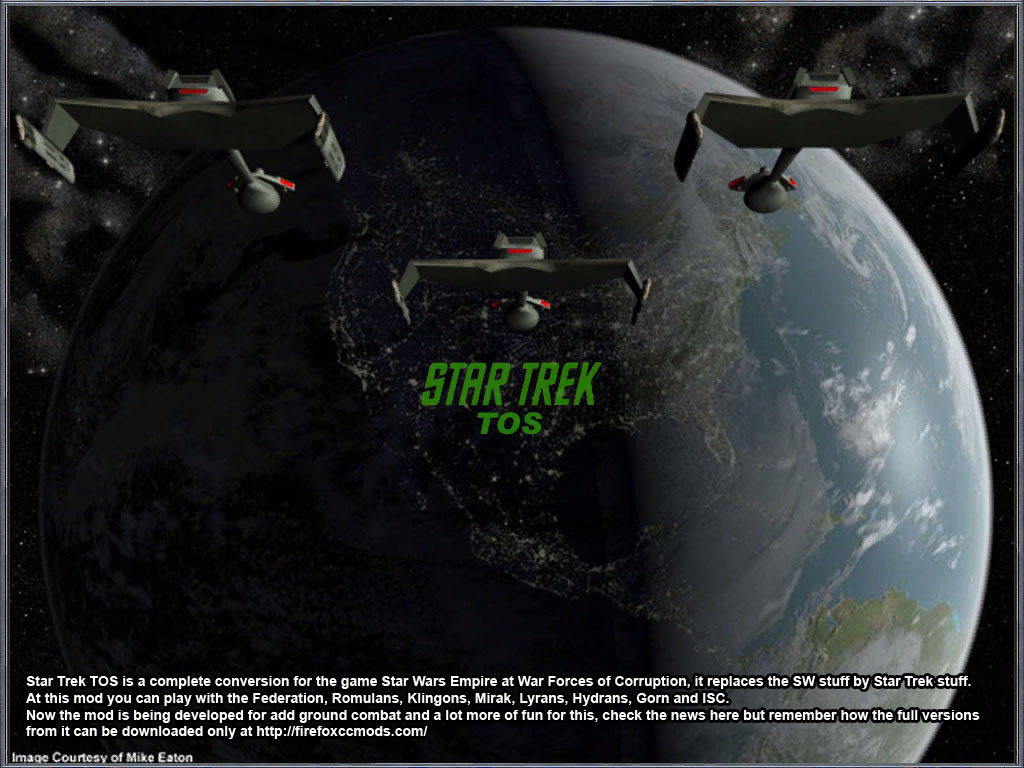 About the Star Trek mod itself, I will change a bit the name because the mod will add units from TOS, TMP and TNG eras. Name it TOS, it was not too correct.

Yes, I will be adding TNG units the next weeks. They are exactly some of the models from the mod Trek Wars Moddb.com but with a lot of additions as by example, death animations, damage effects, lights, weapons, turrets, yes turrets ;-) and more, much more.

In fact, these additions will be in all the space models from the mod. I will see later what the ground part requires.

Yes, I will add a better balance in weapons. There will be a lot of changes in the abilities and weapons. All the damage system will be new.

Here I have recorded the special battles used to improve weapons. Two Battleships, the one from TMP and the one from TOS. Two starships from different eras and by this reason, the TMP Battleship must be most powerful than the TOS Battleship but how much?

Test one, clearly the abilities are important. But the automatic abilities as the proton torpedoes blast makes too damage.

Test II, this time without manual abilities and only with the automatic torpedoes blast but with several improves in weapons damage. You can watch how there is clearly a improve. The TOS Battleship can win if you avoid most of the enemy blast and you get good shots in the hardpoints from the enemy ship. However, the blast continues being very powerful because these ships are small and one impact can damage most of the starship.

Test III. After more improves. Balance is much better. However, abilities are the key wining many times. But as you can see, you can avoid some of them because the proyectiles fired by them will not pursue you and these units are fast. Of course in a battle with more units, it will be different.

What about phasers? if you take a look, they make moderate damage but clearly they have firing arcs and you must move the unit searching increase your shots. In these battles 1 vs 1, you will not note nothing too different but the Phasers are turrets with movement, with a small difference, you will not see the turret but it runs a turret. They rotate, they have firing arcs and they recharge, by this reason, you must move your ship around the enemy if you want maximize the number of shots from your ship in the enemy.

Time to test the TMP Battleship vs a less powerful unit. I will use the FBCH from TMP. A powerful unit but less powerful, a class Heavy Battlecruiser. In the mod, weapons are divided at light/medium/heavy, space stations can have heavier weapons.

The FBCH clearly is not a match. Even with its abilities, it is not very good. At least controlled by the AI.

Controlled by me the FBCH is even worse. :-P The several Phasers from the Battleship convert my FBCH in dust very fast.

Now vs 3 FBCH. I use these TMP units as enemies because by the moment I have not improved more units from TMP era. From TOS, I improved all the starships only from the Federation. The new improves can be made fast but first I need free time for this.

As you can see, three FBCH can make some of trouble but they are defeated. I see the test as a complete success. More soon.

Polaris Sector Alliance 1.0b converts the new 4x game from Slitherine at a Star Wars 4x game very similar at concept to the old SW Rebellion game but...

Vol'Talkes has been launched at Steam Greenlight. Now with the vote from the public, finally the game can be added to the Steam list.

The end of the Global Error and the Zero bytes savegame

For many years, we suffered the Global Error in the original EAW/FOC game and at all the mods. Now thanks to Smallpox and Freege, there is a new tool...

Star Wars Empire at War Forces of Corruption Star Trek TOS X Mod by Nomada_Firefox. This mod replaces the SW stuff by Star Trek stuff. This is the list...

Can you slow down the shield recharge ability? Other than fighters/the Starbase with the torpedo volley, I can't ever win with ship combat or destroy any ship, the recharge is like superfast.

Assuming it's an issue as of this moment

Can anyone help me?
As soon as i launch the mod and click skirmish battle, it crashes.
I have no idea why

I can't seem to access the website, is it having issues? Is this an issue for anyone else?

Can this be made to work with base EAW

f you have registered at Firefoxccmods.com and after one day, you did not received a email, you have two options, or you had a duplicated account and your new register was rejected or you were accepted and you did not received the email because it was filted by your email as spawn or because some times, email address do not run very well.

My recomendation, enter Firefoxccmods.com and try login with your nickname and password.

So, why can't you upload your current version here? Seems like a lot of work, just to download your mod. Especially since Federation at War just went back into development.

Because I have my onw place.

Great mod, but the shield refresh rate on most ships is way too high. You can have two ships blasting away at each other for all eternity, and not make any dent in the shields.

Use your fighters torpedo ability on the shield generator. Problem solved.

I do not see the point from smaller ships defeating bigger units.