What should have been the single-player campaign of Wolfenstein: Enemy Territory.

Back in 2002, less than a year after Return to Castle Wolfenstein was released, an expansion pack called Return to Castle Wolfenstein: Enemy Territory was announced for the game, developed by Splash Damage. Initially intended to be a single-player and multiplayer add-on for the original game, the single-player component was ultimately scrapped, publisher Activision stating that it was not as good as the campaign of the original game. Amputated of its single-player campaign, the add-on was renamed Wolfenstein: Enemy Territory, and released for free on May 28, 2003.

Even if Wolfenstein: Enemy Territory was a worldwide success upon release, over the years Wolfenstein fans have come to wonder what the deleted single-player campaign of Wolfenstein: Enemy Territory was supposed to be like. Some even dreamed to play it. Some have tried to convert the maps of the game from multiplayer to single-player maps, with no success. We have tried that too, with the map called Würzburg Radar, which we released a part of as a single-player/cooperative survival mission for the Return To Castle Wolfenstein: Cooperative Gameplay mod, back in November 2018, as part of the Return to Castle Wolfenstein 17th Anniversary celebration.

With Wolfenstein: Enemy Territory Single-Player, we are aiming to bring the missing chapter of the series to life. To do so, we've been searching and examining old news articles from 2002, very early screenshots of the game... to find clues regarding the single-player campaign of Wolfenstein: Enemy Territory. And we did, thanks to IGN, who got to see a pre-alpha version of it a night of November 2002. So, before we talk about our single-player campaign, let's talk about how the original -scrapped- one was going to be.

This new stand-alone expansion isn't just about the multiplayer though, there is a completely new squad based single player campaign that was also shown running for the first time last night. 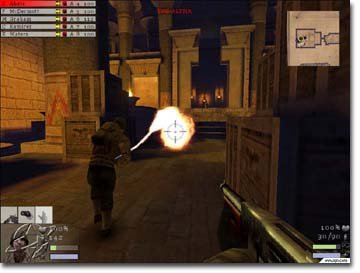 Each member of your team were to be granted with a specific role, through the classes system. You would have given your companions specific orders matching their abilities, and even have assigned yourself a different class if you wanted. The missions themselves were designed following this concept. You needed to use the orders to complete the missions!

So in that vein, you'll bring along different classes (medic, field ops, engineer) and use them in situations to not only help you in fights, but also solve puzzles based around using your men in the right places. You'll be able to switch your own class and the game will actually point you in the right direction for certain levels. Each of your team members will also be able to be outfitted before you jump into a mission. They'll all get default settings for each level, but if you're the type that likes to fiddle, then you'll have the opportunity.

Missions themselves will have elements taken from the multiplayer side of Wolfenstein and shoved into a puzzle format to make things more single player style. Taking advantage of your crew's abilities will be a big part of the campaign. It's not just about shooting anymore, it's also about placement and tactics to reach areas that you might not have been able to reach before. Need some cover? Send your sniper up to a hill to take shoot at an enemy emplacement so you and the rest of your team can move in for the kill. Need to destroy something? Call in the engineer to set some dynamite. Heck, if you need healing or ammo you have walking supply dumps with the Field Ops (what used to be Lieutenant) and Medics.

The command interface that's in the game right now is still early with placeholder artwork, but the gist of it is in place. All commands will be given through a context sensitive system. The default command drops to move, so wherever your targeting reticule is pointed, your men will move when you give the command. There will be different options for commands when you're just pointing at areas of the map such as telling units to move forward for recon purposes and then run right back to the group. While the move command is default, it looks easy enough to switch between commands. Even easier is when the reticule moves over certain context sensitive areas, such as doors or the afore mentioned spots that need detonation, a graphic will appear telling you what you can order. So point at a door and give the command and your guys will bust through and shoot everything that stands in the way.

There will be plenty of other commands that you can give as well such as requesting those ammo and med packs, follow commands, and more. These types of orders can be carried out using the quick chat interface from the multiplayer. For those that don't know, you hit "v" to bring up the menu and then follow the options listed to find the command you wish to use. Once you get used to it, it's actually a very efficient way of communicating. At this point, the AI isn't quite done so there are more commands on the list than there will be when the game is complete. The AI should act autonomously in more areas than they do now. Eventually, you should see AI that reacts to enemies and situations with a good amount of reliability.

Story-wise, the single-player campaign of Wolfenstein: Enemy Territory was supposed to be a continuation to the original game's, with B.J. Blazkowicz returning as the main character, to fight against a Nazi occult threat. What's worth noting is that he was to be assisted by some of his "friends" - most likely the other members of your team depending of the mission.

BJ Blaskowitz makes his return to the franchise that made him a hero, only this time he's not alone. He'll be bringing along several of his highly trained friends to assist in the fight against the evil Nazi occult menace. 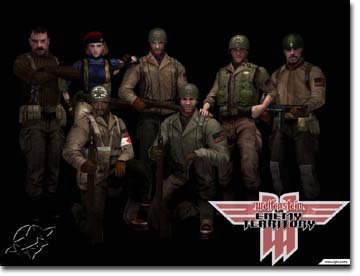 But despite the Nazi occult threat, there were apparently no zombies in the campaign.

One thing you won't have to worry about are those annoying zombies that present no challenge and waste all of your bullets. There'll be no undead to suck the bullets out of your gun this time around, but you can still expect that dark Indian Jones type feel as you see the sights and cruise the crypts of North Africa.

With the Return to Castle Wolfenstein engine, we know that we can't achieve a team-based gameplay properly. That's why Wolfenstein: Enemy Territory Single-Player will not feature team-based gameplay, and it will instead feature an experience similar to the Return to Castle Wolfenstein campaign. However, it doesn't mean that B.J. won't encounter friendly AIs to fight alongside him, or escort him. There will be plenty of chances to catch in that regard. 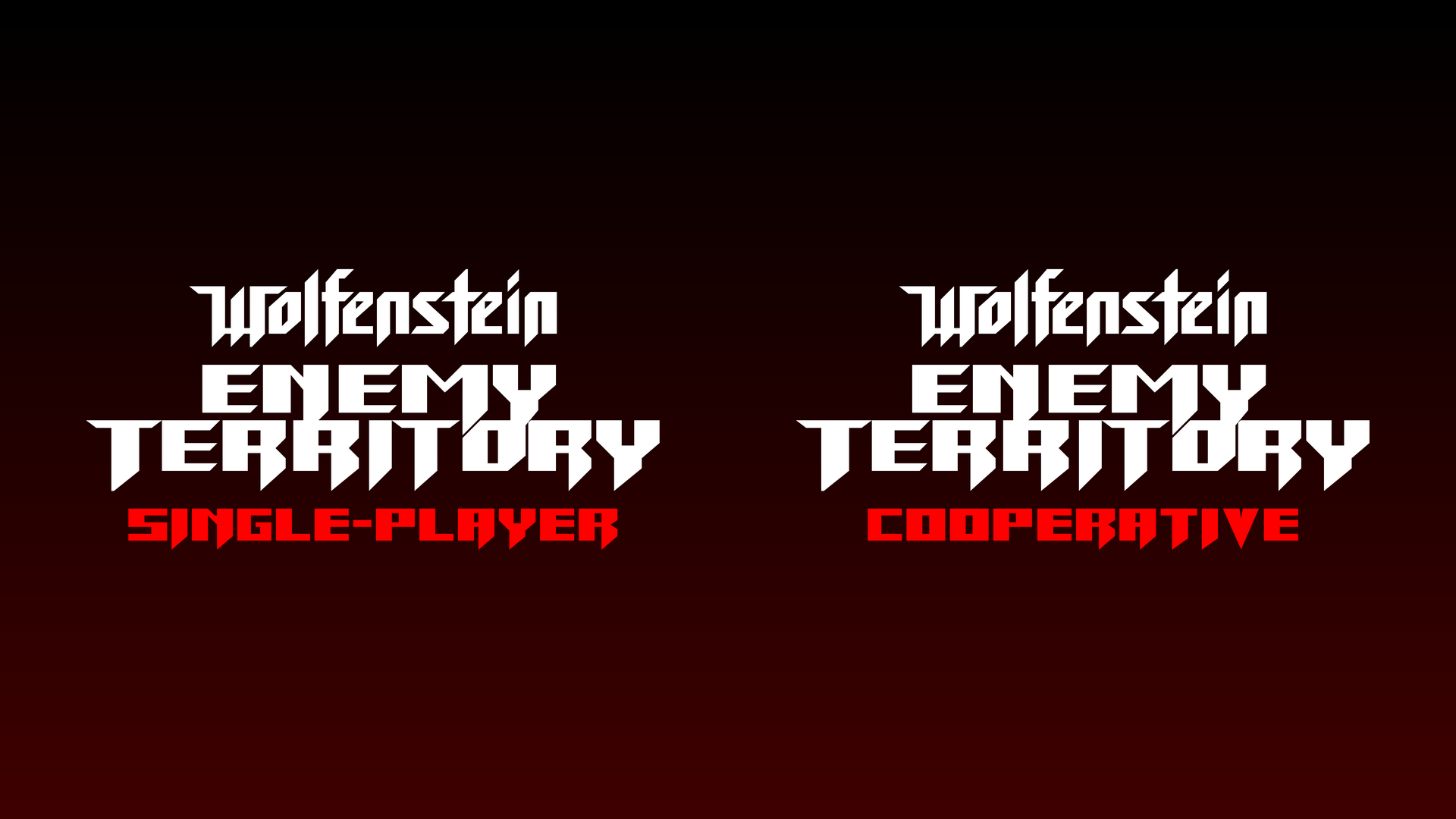 The first half will be taking place in North Africa, in 1942, and the other half in Central Europe, in 1943. As you have guessed, the adventure is taking place in all six maps of Wolfenstein: Enemy Territory, which have received the multiplayer to single-player conversion treatment. The maps are almost identical, with only a few (and very coherent) additions being made. These additions do not expand the maps. These are doors, radios, items, secret areas... elements required for a solid single-player experience. 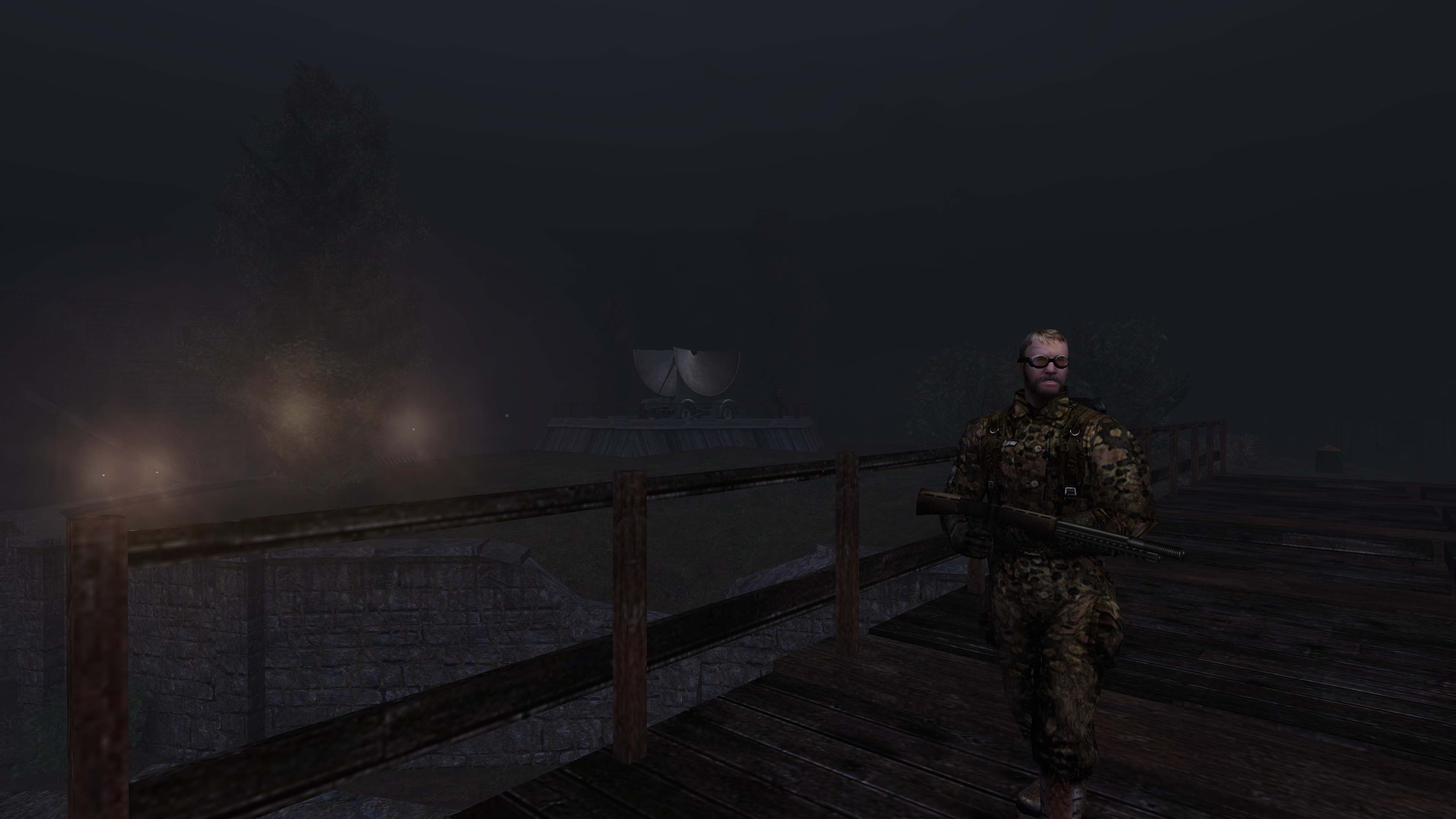 The objectives are mostly the same, but with various additions related to side objectives. However, their context was changed depending of the map. Because of the story we have imagined, some elements of the scenario will have an impact on said objectives. You'll have to figure that out in-game, however.

Speaking of the scenario, even if we can't say much on it yet, stay assured that you can expect a story-driven experience. And to stay true to the original developer's initial idea, a lot of acquaintances of B.J. Blazkowicz will be present, and as for the zombies there won't be any. 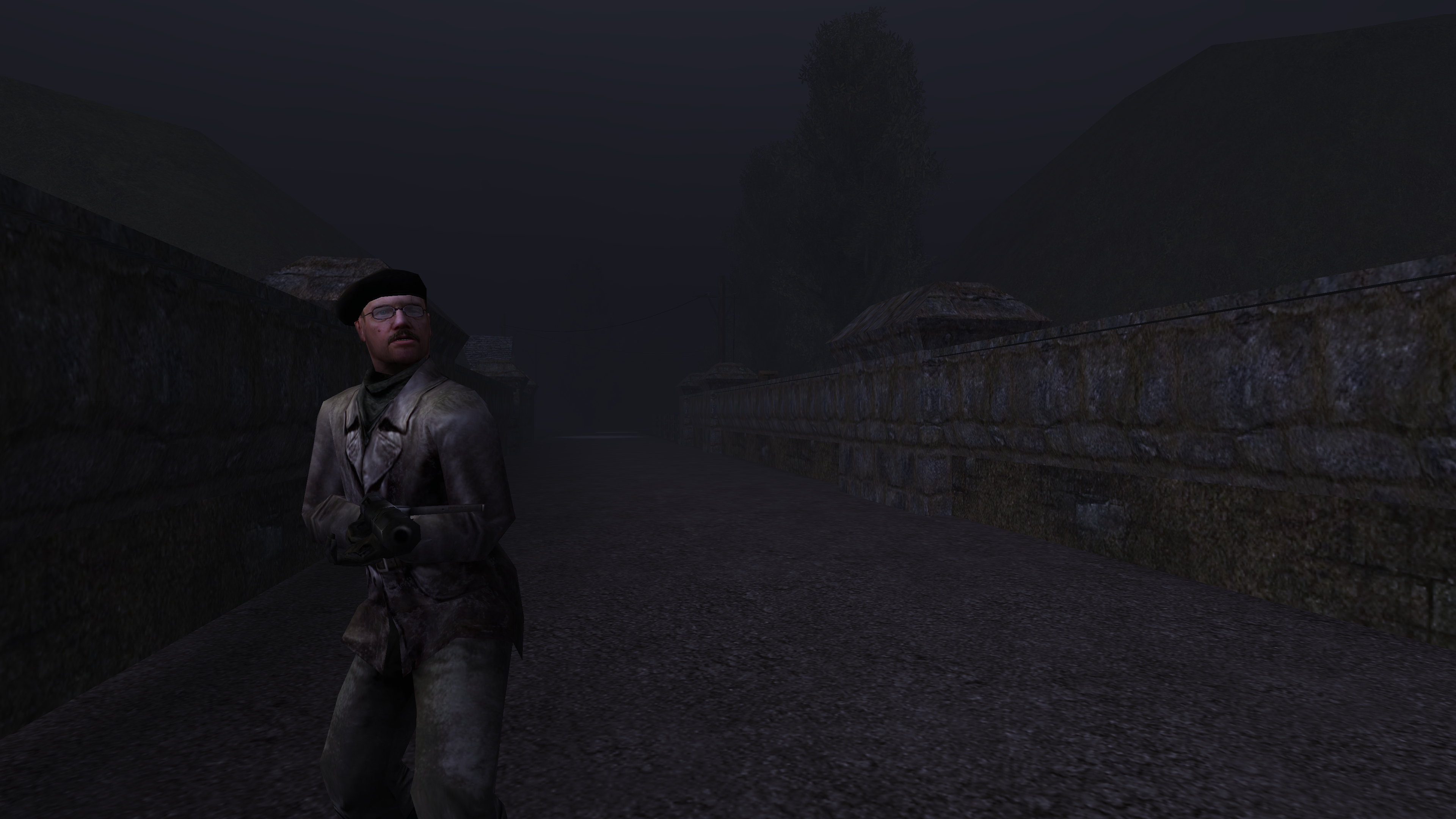 Speaking of things that won't be in the campaign... Converting Wolfenstein: Enemy Territory maps comes with a price. Even if we have successfully converted the textures and lighting of said maps into the Return to Castle Wolfenstein engine, there are other limitations and absent features that we can't ignore.

Both of these will be indefinitely ignored during development, until a solution arises. 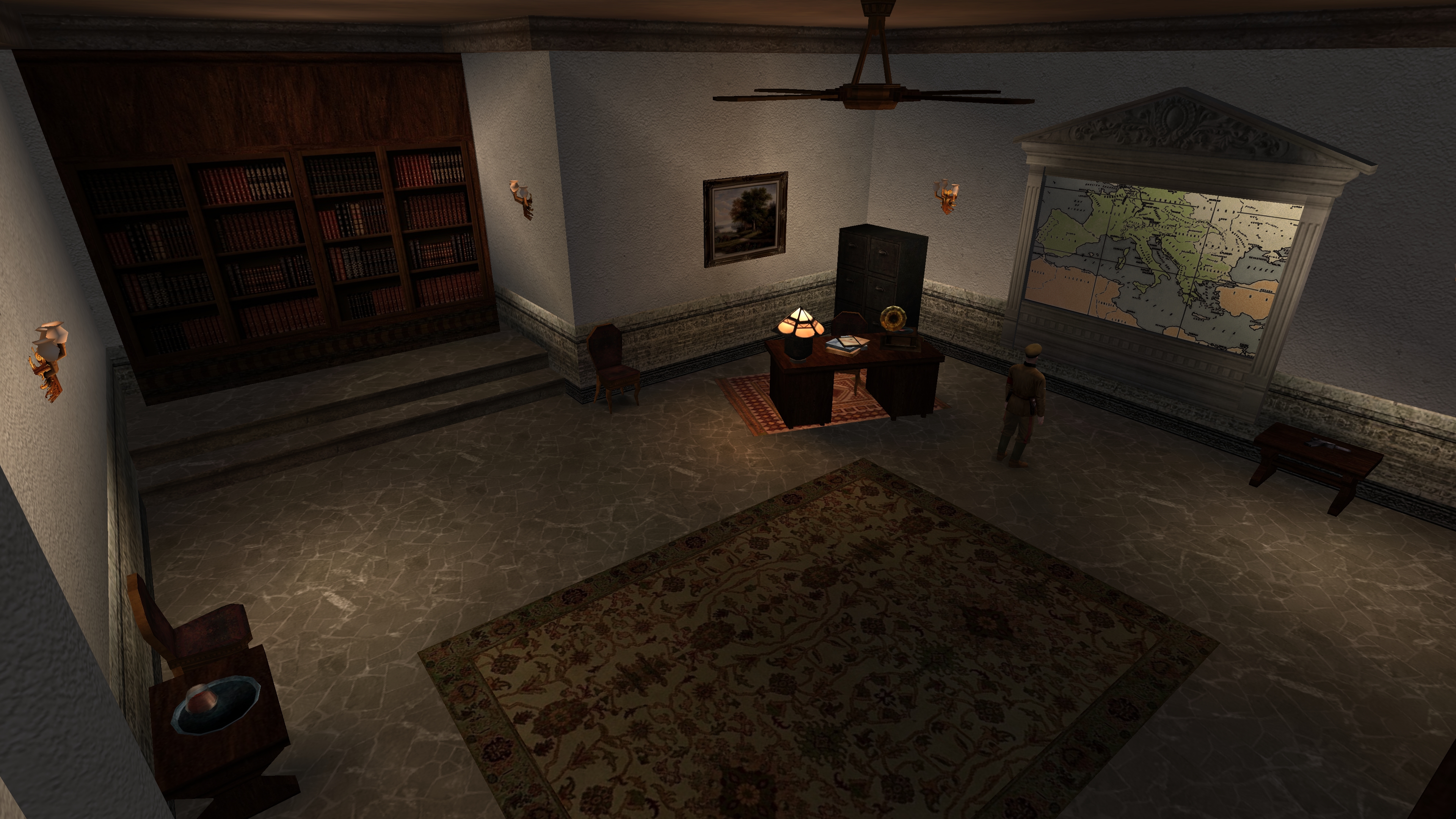 On another subject, for those who don't like old graphics, models, sounds, textures... we have good news: Wolfenstein: Enemy Territory Single-Player will be compatible with RealRTCW - Realism Mod, and that's not all, as it will get an iteration especially made for it, that will exploit the AI enhancements, gameplay adjustments and other features offered by the aforementioned mod. 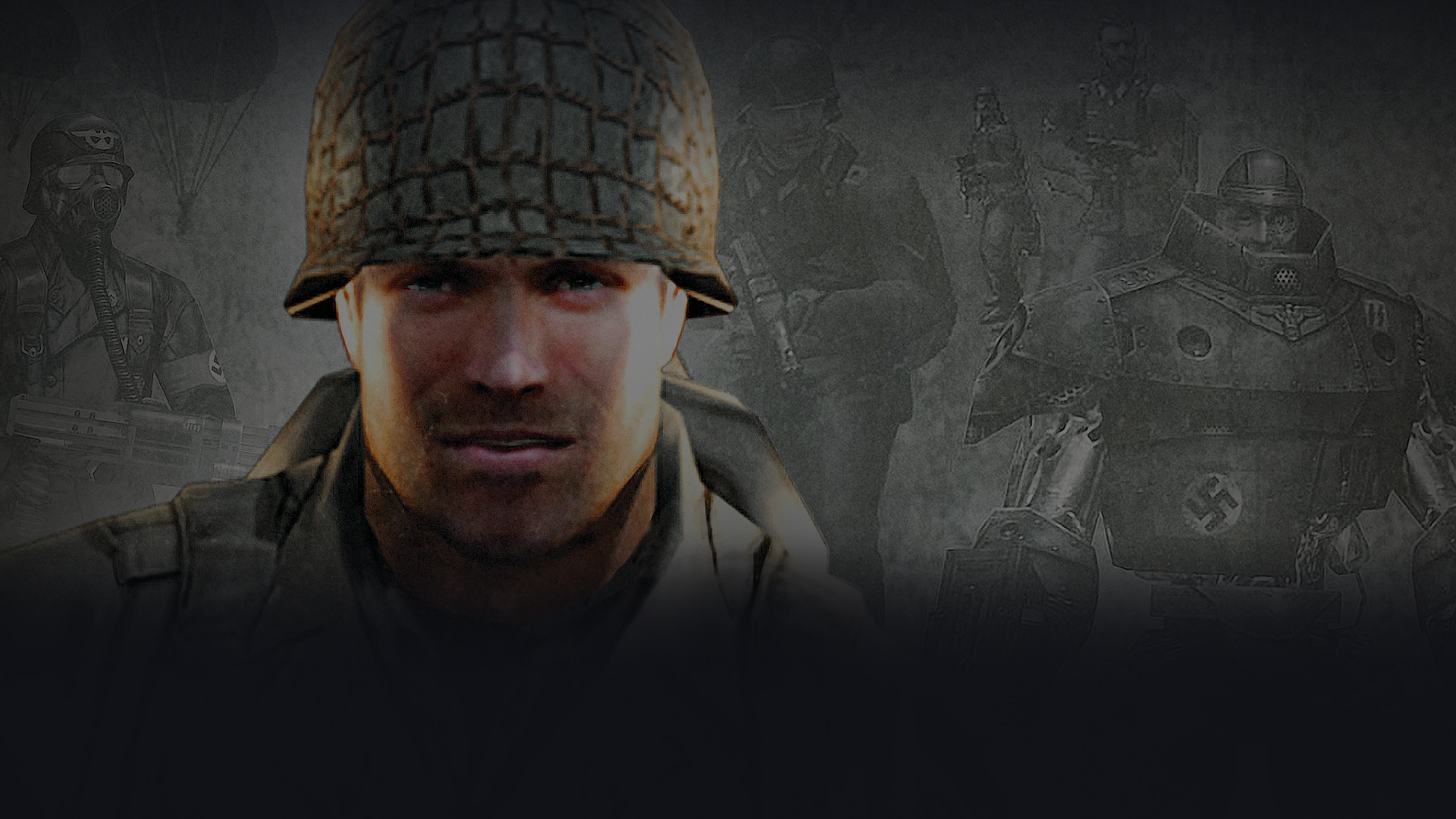 Can't wait to play it with my friends!
Amazing work guys!

Dude, what do you mean you can't do coop in the engine???

What you meant to write is you're lacking the programmers capable or skillful enough to do this.

Maybe you should shoot a PM to the devs of RTCW:C or OpenWolf.

It's more of a choice than a constraint. Of course, we could write new code for team-based AI. But, by bringing Wolfenstein: Enemy Territory Single-Player to Return To Castle Wolfenstein: Cooperative Gameplay (RTCWCOOP), we're already achieving a sort of "team" gameplay experience. Hope you understand. :)

I'm really looking forward to this.

Aaand in five years its still not going to be finished :P

You could be surprised. :p

A special RealRTCW - Realism Mod version is a must. :p

This might be the coolest expansion I've heard of in a long time. I never knew they were planning a single-player game! Awesome!

Thanks for your kind words and support. :)

Of course! Looking forward to playing it

This is awesome news. Finally, we will get to play the missing single player component of "Wolf ET"!

One thing I should mention though: there are actually snow and rain effects available in "Rtcw". However, the rain is just brushes and the snow is just a small entity that doesn't provide many snowflakes. As you can imagine, using those in large areas will severely lower the FPS and overall performance of a map. I hope to see proper weather effects ported from "Wolf ET" to "Rtcw" some day.

The rain/snow effects through brush work is indeed possible, via correct "shader" combinations. However, as you have pointed out, this causes severe performance issues. But that doesn't mean rain/snow won't be added later on. The Dark Army: Downfall has rain, after all. 😉

Thanks for your kind words and never-ending support btw. 😃

omg, trhis is a dream oming true!" please don't give up on this, any ETA yet? thanks

Thanks for your kind words and support. 🙂

We will NEVER give up. Work is still ongoing. 😉

No ETA yet, but we already have our own little estimation, which is a good sign. We'll make an announcement only when we're completely sure. We don't want to disappoint folks with delays and such. Hope you understand.

Nice! and this after all that years? :D

is it maybe possible to play (even it´s only for one Mission) a German?^^

Sorry for my bad english :c