You are sent on a special mission into the heart of the Reich to investigate evidence of the Nazi's possession of a new and mysterious power.

While behind enemy lines, you discover they have done much more than develop a new weapon. The Nazis are harnessing the power of a dark parallel dimension called The Veil; in order to create a weapon of war-ending magnitude.

Move between the Nazi's dark reality and yours as you command an enormous arsenal of Resistance and Axis Weapons. You can also turn to the Black Market for weapon upgrades, or unleash the Nazis own dark powers and perverted science against them with supernatural weapons and Veil-enhanced firepower.

In this update, I would like to talk about the features of this mod that makes it way different than normal Wolfenstein 3D mods out there. 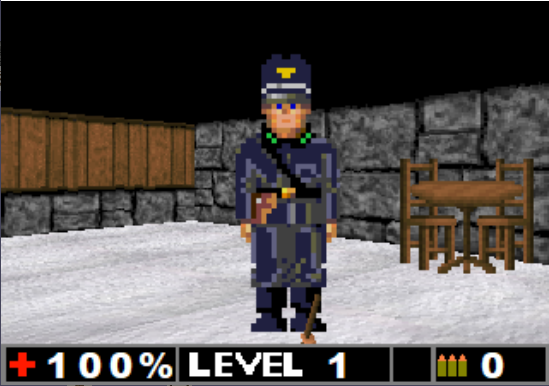 First venture into making my own sprites: The Weimar Police officer

So the first feature that I have implemented is the mouse movement and the controls that would represent current contemporary shooters but I am still debating with myself if I would like to include that as I feel that it may not be something that is familiar with Wolf3d fans out there. I got inspiration for this mouselook feature from a mod called Death Trigger in which it allows the player to look up and down. I might go for the same feature as that mod because I feel it is unique and does not go too modern like what I have currently. Let me know what do you prefer. The movements in this game would also simulate current shooters but I have feedback from players of my previous mod that the controls were a bit awkward and I got countering feedback that the controls were not modern enough so I really am trying to find a balance to this to cater to both parties, the modern and the nostalgic gamers.

Now I have another issue with the weapons of this mod. I am looking at the background in which my mod is set in and so being the 1920s and in Germany, there were a lot of restrictions when it comes to firearms. I have for the character three weapons so far. A baton seen in the picture up there, a Pistol that is to represent like a Walther or something similar maybe a Browning, I also put in a Bolt action carbine and the last weapon would be the MP18. 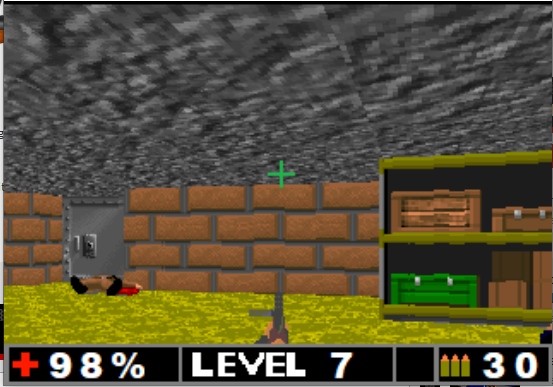 I am not sure what other weapons I should include, maybe a double barrel perhaps? But do suggest to me what you guys would like to see and I might consider putting it but of course, it must be historically accurate to the time period that it is set in.

Speak to you guys soon! Anything hit me up on message

A guide to pre-SDK modding of Wolfenstein (2009) Single Player NOTE: modding the game this way would be outside the bounds of Activision Technical Support...

A mod that allows for many more bodies as well as body parts to be displayed at a time in Wolfenstein 2009's SP campaign. Its performance impact on modern...

Here is the most recent patch for Wolfenstein updating the game to v1.2. This patch resolves issues and fixing bugs such as the dedicated server ping...

Activision releases patch 1.2 for Wolfenstein: Players will now receive their proper gold and stats at the end of the match instead of occasionally losing...

The 'ET Model Tool' got a new name: 'Q3 Model Tool'. It supports all Q3-Engine based games. It's a tool for playermodel-makers, mappers and modders.

The Wolfenstein SPK/MPK Extractor made by Bellox902 is a powerful tool to extract .spk/.mpk gamefiles from the Wolfenstein Game. These files contain all...

Has anyone managed to extract models from the multiplayer part?

I'm trying to get the Luger pistol but ninjaripper doesn't seem to work with the multiplayer part.

A mod to play coop this game please !!

I wish you could use the unusable weapons in the game at places. (M1911, M1919 BAR, Mk. II/Pineapple Grenades, Luger P08, Possibly the M1911A1 in intro.) also some weapons from Return to Castle Wolfenstein as well would be nice. (M1 Thompson, Sten Gun, FG42, Snooper, and Venom Gun. Maybe even the Trench Gun from Tides of War/XBOX port. Knife and Kicking would replace the gun bash, but keep Kar98k bayonet.)

Well you can't really buy it anymore so I don't see why people have downvoted this guy, however this game was a disappointing rushed cash grab, the original idea for RTCW2 would've been much better.

Man wish they made an SDK for this modders would of improved the game so much.

Does anyone know where I can Buy this Game?

Wolfenstein was definately a good game. The AI was very agressive and smart, which I found made the enemies seem almost real. The graphics a very pretty, which you'd expect from IDTech 4. I was solely disappointed by the new meothd of storing data for this game. Unlike other IDTech 4 games Wolfenstein is not mod friendly. It is anoying, but I forgive it for the game itself. The weapons were very nice. They had that feel to them that you want in a game. Also, the upgrading system was pretty good…