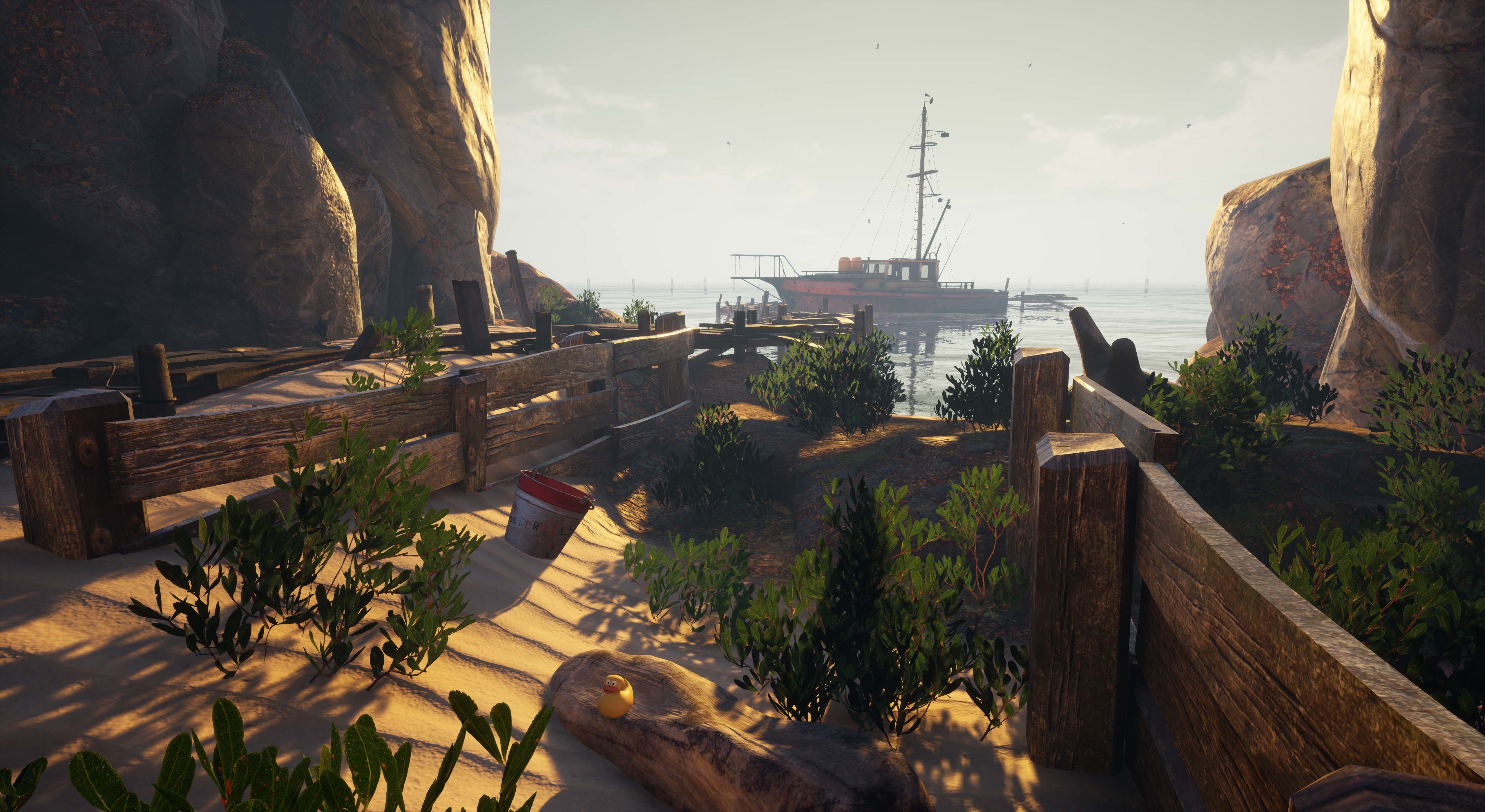 Estranged: Act II is now released from Early Access for Windows, macOS and Linux! As with my last post, I would like to thank everyone that has been a part of this project. I hope that you have had as much fun playing as I have had developing it over the past 6 years.

I mentioned in the post linked above about the future of Estranged, and will share more in the weeks to come after the dust settles.

Join me and the other 800+ people on the Estranged Discord server if you'd like to hang out, and I'll be around in the forums to answer any support requests that might arise.

I'm still looking to update the game with fixes and localisation changes, so you're interested in translating Estranged: Act II to your language or improving an existing translation, please drop by the Discord server!

As 2017 draws to a close, I thought I’d round up some of the things that happened over the past year, and look ahead to what 2018 will bring.

Estranged: Act II will be released onto Steam Early access in the coming weeks.

Estranged: Act I was released 3 years ago today on Steam!

We're excited to announce that the first alpha of Estranged Act II is now available for Windows and Mac!

The full C++/shader source code for Estranged: Act I. For programmers!

Estranged, the story of a lone fisherman, stranded on a mysterious island during a violent storm. Explore rich environments and meet the curious inhabitants...

The final version of Estranged: Act I, the same as the version on Steam. Requires the Source SDK Base 2013 Singleplayer to play.

Estranged: Act I (Beta for Linux)

8 months after Alpha 5, the next Estranged release, Act 1 (beta) is here.

I love the unreal engine on act 2 brings the graphics right up. I bet it is easier to work with than source 2. On act one on the pc screens in office, i noticed a classic morris minor. Wow havent seen that around for years, my mate had a green one. They are worth loads of money. You better sell it because if Prince Charles and the great reset get there way you'll have to get rid. Look up the Great Reset Alan. Get prepared.

people need to get the facts right ******* moaners. Free mod that looks amazing
and if you bother to read the readme's then it will work.

Hi, Yeah I'm having an issue with your mod, I'm sure I've installed it properly, and I DO have half life 2 and the source SDK installed, So I thought, 'hey why not ask the developers, They'll know what to do!', my issue is with starting the mod, when i click "Play" estranged: Act 1 on steam it starts up but as a big black screen, then a white popup pops up (who woulda guessed) that's completely empty, except for one black button, and when i click it the game ends, so any help you can give?

it's a stand alone not steam install it anywhere

Is "Estranged: Act II" a playable game? When I have downloaded this for Windows, one of the file is "UE4PrereqSetup_x86." What it is this file? Is it an executable?

Folder within this download also include "Engine" and "Insulam." I have no idea what to do with them.

Are there any instructions as to how to 'extract' or 'play' "Estranged: Act II?"

This my review for "Estranged Act I" -- due to the fact that as far as I can tell....after downloading the files for the sequel, "Act II" -- I have realized that there IS NO Act II: When you download and extract the files on this webpage for 'Act II,' you get libraries and useless files, instead of an actual 'playable' game.

"Estranged Act I" is one of the more memorable HL2 user-made mods that I have ever played through (which I have accomplished twice over the years): You begin this mod in some kind of a fishing boat...and after the opening sequences, you are shipwrecked on a deserted and fairly-picturesque moon-lit dock.

In addition to the 'standard' HL2 options (video config, audio, keyboard mappings, etc.), Estranged includes a couple of handfuls of 'custom' options that are primarily 'graphical enhancements.' However, by means of experimenting and tinkering with these 'additional options' -- I found that most of these 'graphical enhancements,' DECREASED.....rather than INCREASED the graphics of this mod. For example, when enabling the option, 'depth of field,' the graphics become blurry and noticeably worse....rather than better. There is also an additional graphics option that allows you to increase or decrease the 'graininess' of the graphics....which with tinkering with allows you to increase the already high-quality custom made graphics even more so than it is 'by default.'

Right off the bat, I have experienced glitches (script or otherwise?) in "Estranged Act 1" BOTH times that I have played this mod all the way through: When you enter the interior of the shack in the dock -- perusing a youtube video walkthrough there are 'supposed' to be some grenades in the interior which allow you to, once collected, to hurl into a box which will have the effect of shattering a window, through which you can enter, so that you can progress towards the back door of the shack.....and later on towards a deserted beach.

These grenades have been entirely lacking BOTH times I have played this mod...hence, I have had to use 'noclip' cheats, INSTEAD, to enter the other side of the window..as well as to equip myself (using the 'impulse 101' cheat') with weapons that are nowhere to be found inside the shack....but are SUPPOSED to exist in the shack....

Though the custom-made graphics, ambience, and sound FX.....as well as much of the level-design of "Estranged Act 1" is pretty consistently of very high quality throughout this mod......the actual combat kind of sucks, which is a fairly big letdown: Part of this reason is because 'Estranged Act 1' only allows you to carry one weapon on your person at all times....and ONLY ONE. Not only that, but there exist only several weapons anywhere at any point in this mod: These are a standard pistol, a sub-machine gun, and a shotgun.

The only 'monsters' and 'creatures' that exist in this mod are custom-made zombies. Hence, there are no 'head-crabs' or any other of the plethora of creatures that you find in other HL2 mods. And for the most part, monsters are quite few and far between.

The few times that you finally experience combat with 'armed civilians'....the combat is fairly unbalanced and unfair and I found myself needing to constantly utilize either an 'invincibility' cheat and/or an 'all ammunition' cheat.

The strength of "Estranged Act 1" lies in 'exploring'.....as well as its graphical quality, ambience, some puzzle solving and level design. To reiterated, the variety of weapons itself and actual combat sucked.

I just want to add that this Act 1 on the Source engine is superior game-play all the way around compared to Act 2 on Steam. Yes, Act 2 has the prettier graphics, that's it. Just my humble opinion. Nonetheless, thank you Alan Edwards and devs for your efforts. I take my hat off sir...

How do you 'play' Act II? When I downloaded the "Act II" files....I get a bunch of files but no actual 'playable game.'

Forget that downloading of those files. Turn on your Steam account, go to the store and look up Estranged: Act II. Install it like any other Steam app and away you go!

Guest? Anyway, there you have it man. hardhead970

This was an awesome mod. A few minor things like a crowbar on the ceiling, but i guess thats me not liking a slight challenge, i just spend like 20 mins chucking the rocks at the boards, enjoying the story so far and cant wait till a more complete story comes to light.

Keep up the good work and cant wait for the new weapons coming.