Just a plugin that I made that aims to replicate Star Wars (or at least tries to) in Endless Sky. During the past year or so, I've managed to create around 280 ships, ranging from one-man fighters to capital ships, all from a variety of eras and factions (The Old Republic, the Republic & CIS, the Empire & Rebels, the First Order & Resistance, and even some from Legends). Currently, there is no existing storyline or a functioning galaxy map, though I intend to finish another 100 ships before I develop other aspects of the plugin (their sprites can be found in the plugin already).

Judging by how experimental and unstable AGFFA is, I figured I should create a list of 'frequently asked questions' as a warning for those who are planning on adding the plugin to their game. The FAQ automatically opens when a new pilot is created, and has a list of 8 frequently asked questions and formulated responses for each of them. Hopefully it'll answer some common questions for people who are looking to add this plugin to their game, and more importantly, warn and prevent people from messing up their save files.

One of the largest issues with v0.4-alpha and preceding releases was the large size of capital ship sprites, which resulted in large collision boxes which soaked up damage from enemy fighters. Since large capital ships quite frequently overlapped with friendly fighters, the smaller ships were protected by them and were virtually immune to enemy fighters.

I have attempted to solve this issue by giving all fighter and interceptor weaponry the "phasing" attribute, which although makes asteroids and other obstacles useless as a form of cover (phasing weaponry can pass through obstacles), does make fighter vs fighter combat more viable. This is because fighters can only hit their targets, so their weaponry will pass through other non-targeted enemies.

Outfit Overhaul (Yep, another one)

This change is pretty self-explanatory. I fiddled with the ship outfits names, thumbnails, and some of their values as well. I actually uploaded this gif to Moddb a while ago, but I might as well copy and paste it here as well. The icons are quite clearly copied from the new game Star Wars: Squadrons, but this shouldn't pose a copyright issue. I think.

Recently, I have been wondering whether the current ship scaling should be altered in AGFFA. The image below contains two scales: the current one (where I just "eye-balled" and guessed the size of ships roughly), and a linear scale. The Executor-class Dreadnought is part of both scales, and is quite obviously too large in the linear scale to have in-game. If I were to follow the linear scale, the Executor would be long enough to fill at least 5 computer screens in length, so there's no way I'm going with that. 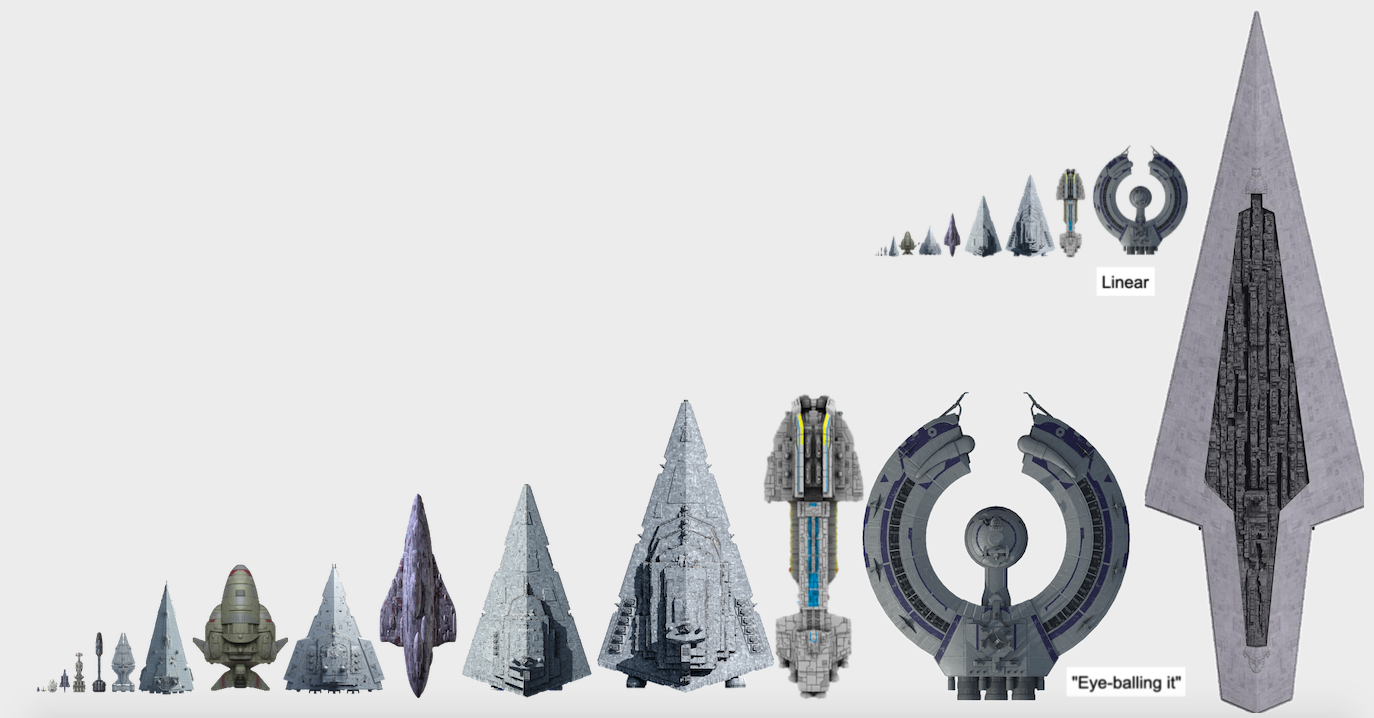 So, I spent about an hour fiddling around with Microsoft Excel to see if I could format a logarithmic scale or something curved to decrease the size of larger ships. I ended up with the equation f(x) = 13.418x^0.742 (which I realise isn't logarithmic), which still grossly increased the Executor Dreadnought to an absurdly large size.

I think I'll just stick with the current scale, even though it makes a Lucrehulk seem half the length of a Super Star Destroyer (which is quite clearly not the case in lore).

Oh, Here's Some Other Stuff

- The Eclipse II-class Super Star Destroyer!
Unfortunately, the Axial Superlaser is pretty difficult to use since it takes ages for the ship to face towards its target. It's pretty destructive though, and it's a real shame that the ship takes most of the screen, making the target most likely off-screen.

- The B6 Prototype's Composite Beam!
This weapon deals a lot of damage, and isn't quite balanced yet. (hmm... though nothing really is balanced anyway)

Alright, that's enough of that. I'm tempted to add more gifs to the article but I won't. (I only recently realised I could do that and I think it looks awesome).

Development Progress – May the 4th be with you! ARTICLE

I thought I might as well use this opportunity to give an update on my progress so far, though in all honesty, I haven't really accomplished much since...

So I finally received permission from most of the artists to use their artworks, including the one who created over 200 ship designs. Phew! It looks like...

During my time testing the ships from my (still largely unfinished) plugin, I spent about 20min purchasing an absurd number of ships (over 1400) just...

This alpha has around 280 different ships and a few explorable systems (including Coruscant, Anaxes, and Empress Teta). A few experimental missions have...

I can't enter the game. On the menu is just credits and the menu but no buttons at all.

Question, How does one use the tractor beam, if and when your ship has one?

Good question! Tractor beams, like most things in the plugin, are pretty experimental in that they haven't received proper balancing (whether that be energy requirements or slowing damage).

That being said, if you do want to activate them, tractor beams have been designed to be ammo-less secondary weapons. In other words, they have an icon next to the rest of your secondary weapons, and have to be manually activated (like a normal missile/torpedo weapon). They're particularly fun to use on the Starhawk Battlecruiser, which is automatically outfitted with them.

I have a problem when starting new game,it wont appeared the faq screen and not all the content applied,can anyone help?

The reason why I haven't released v0.5-alpha yet here on Moddb is that it requires mechanics from v0.9.14-later of Endless Sky, which has yet to be released on Steam and could cause a little confusion for those who want to try out the mod but have little or zero experience compiling the continuous version of the game or using ESLauncher2.

also I use the latest endless sky version
in steam version,got it when steam release the endless sky free download

This mod is awesome buddy, but i have some questions:
-First, how i can get the cool laser effect of the B6 Composite Beam? On my computer it shows like the vanilla beam
-How can i enable bigger ships, like the Executor or any big ship without them appearing as a black rectangle on my screen?
And, when i enter any outfitter, several weapons will be without a thumbnail. How do i resolve this?

Huh, that's really bizarre (at least the Executor being a black rectangle on your screen). I'm really not sure what could be causing that.

I'm guessing that the B6 composite beam and lack of outfit thumbnails is because you're using the latest Moddb version, rather than the latest Github version, but I'm not sure. (https://github.com/Ember369/Endless-Sky-A-Galaxy-Far-Far-Away).

If you use the Github version (which requires the continuous version of ES) then things should be a lot better. It might even fix the Executor issue as well, since I optimised sprites about a month ago and really cut down the plugin's large file size. Hmm I really should make a the v0.5-alpha release on Moddb one day, but I probably shouldn't until the Steam release of ES catches up to continuous.

Hi there, sorry to bother you again, but i downloaded and installed the GitHub version and it's perfect but, when I enter a shipyard to purchase some ships, the only ship available is the 42. Any suggestion about what I should do? It's only this problem that's bothering me and I really want to test the B6 laser on some imperial TIEs.
Regards, Inkling_Leader

Oh don't worry you're not bothering me at all! :)

I feel like you don't have the continuous version of Endless Sky. The reason why I think other ships aren't available to you is because I've defined new ship types for SW ships (e.g. "Star Destroyer" and "Heavy Cruiser" instead of "Light Warship" and "Heavy Warship"), but that's a recently added feature of ES that might not be in the Steam version yet.
(The 42 ship was just a debugging thing that I had so you can just ignore it)

If you can see Star Wars ships flying around in the system then there must be another issue, which is curious.