Endless Sky is a 2D space trading and combat game inspired by the classic Escape Velocity series. Work your way up from a relatively wimpy shuttle, cargo ship, or fighter, to a highly upgraded and customized flagship or to a massive fleet of warships or freighters. Earn money by carrying passengers or cargo, escorting convoys, bounty hunting, or plundering and capturing enemy ships. Take sides in a civil war, or ignore the story line and just enjoy exploring the galaxy and blasting pirates.

The main story line takes about 8-16 hours to play through. The galaxy contains hundreds of star systems and planets, and several alien species with their own unique technologies. You can choose between more than fifty ships and several hundred ship upgrades. A plugin system allows anyone with a text editor and a paint program to create new ships, weapons, or missions, and the galaxy editor can be used to add new star systems and planets.

For more information, please visit the website or read the player's manual.

Development Progress – May the 4th be with you! ARTICLE

May the 4th be with you! 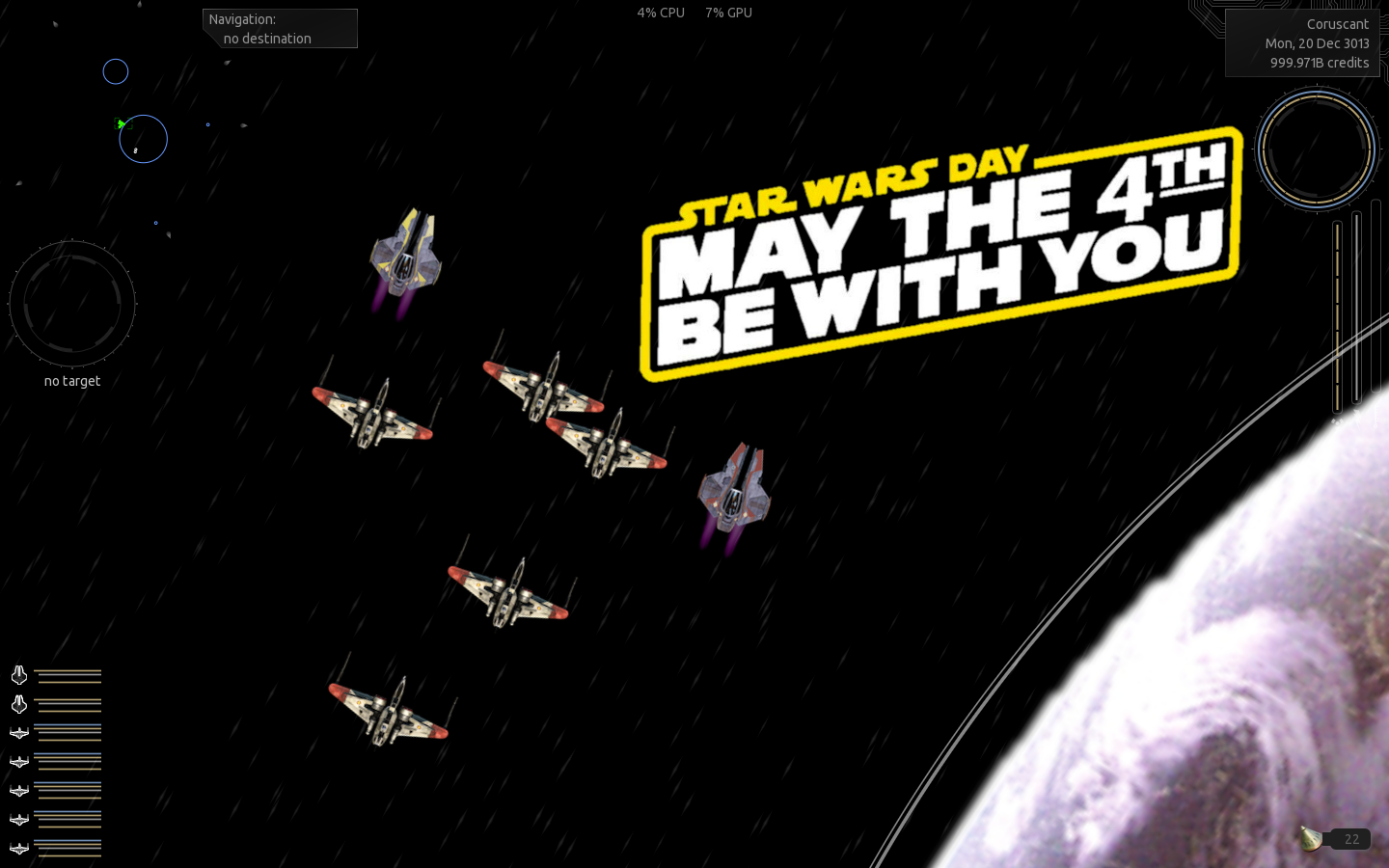 I thought I might as well use this opportunity to give an update on my progress so far, though in all honesty, I haven't really accomplished much since the last article.

In terms of my grandiose goals of creating a "fully functioning galaxy map", only about 10 systems have been added thus far. Which isn't necessarily a detrimental thing thinking about it now, since it has allowed me to make progress in other areas.

In the past month, I've mainly been fooling around with random things, like adding spaceport propaganda. It's only there for aesthetics, but I thought I might as well learn how to add to other aspects of the plugin, rather than just adding planets, ships and outfits. At least it looks pretty cool though. 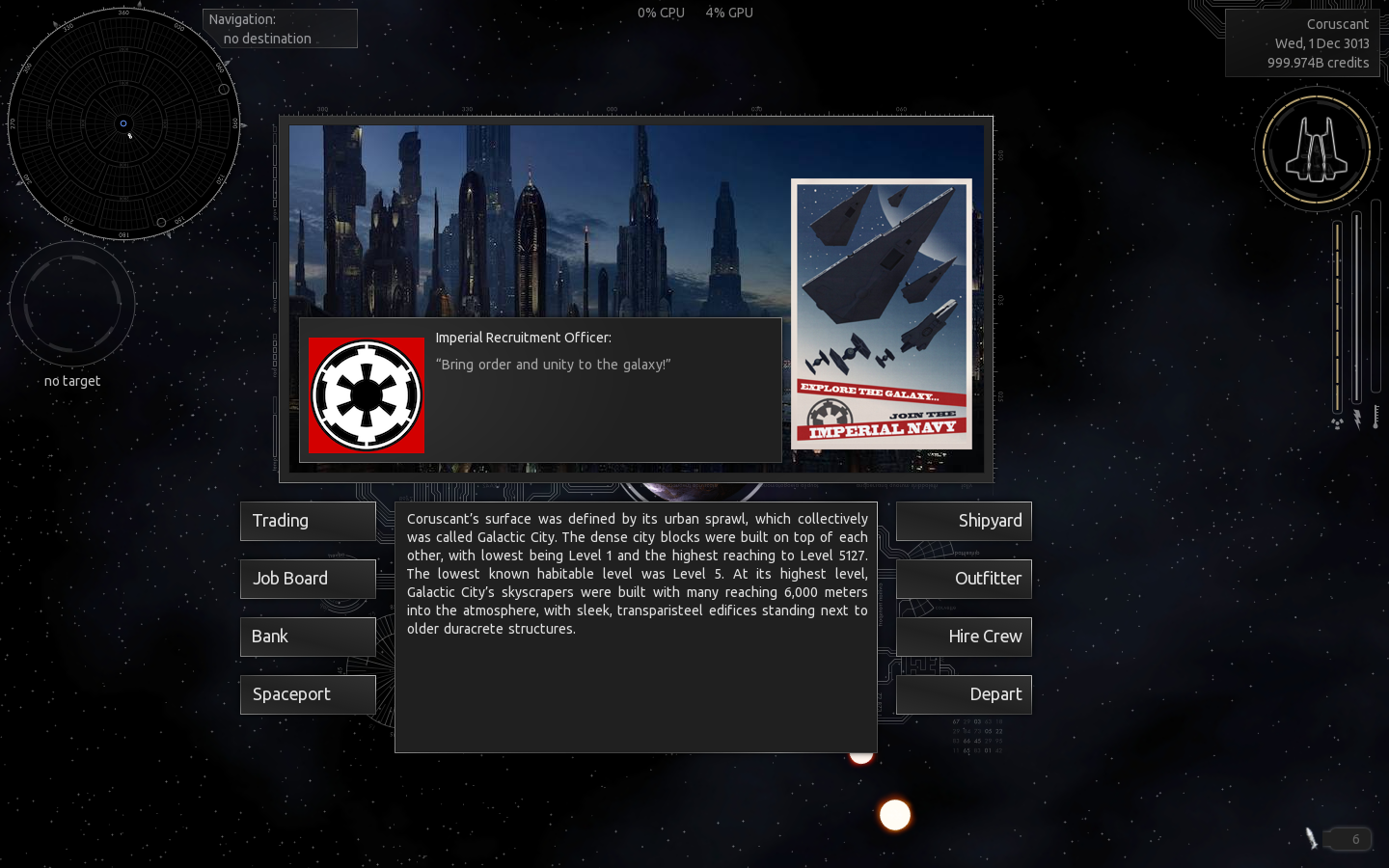 Another aspect that I spontaneously decided to work on is the addition of astromech droids, something that was far simpler to code than I initially thought. I have created both an "Astromech socket" outfit and an "R3-series Astromech Droid" so far, the latter of the two only being purchasable if the socket is already installed. The thumbnails are just temporary/non-existent at the moment, but the outfits themselves seem to work pretty well. Are they balanced? Not quite. 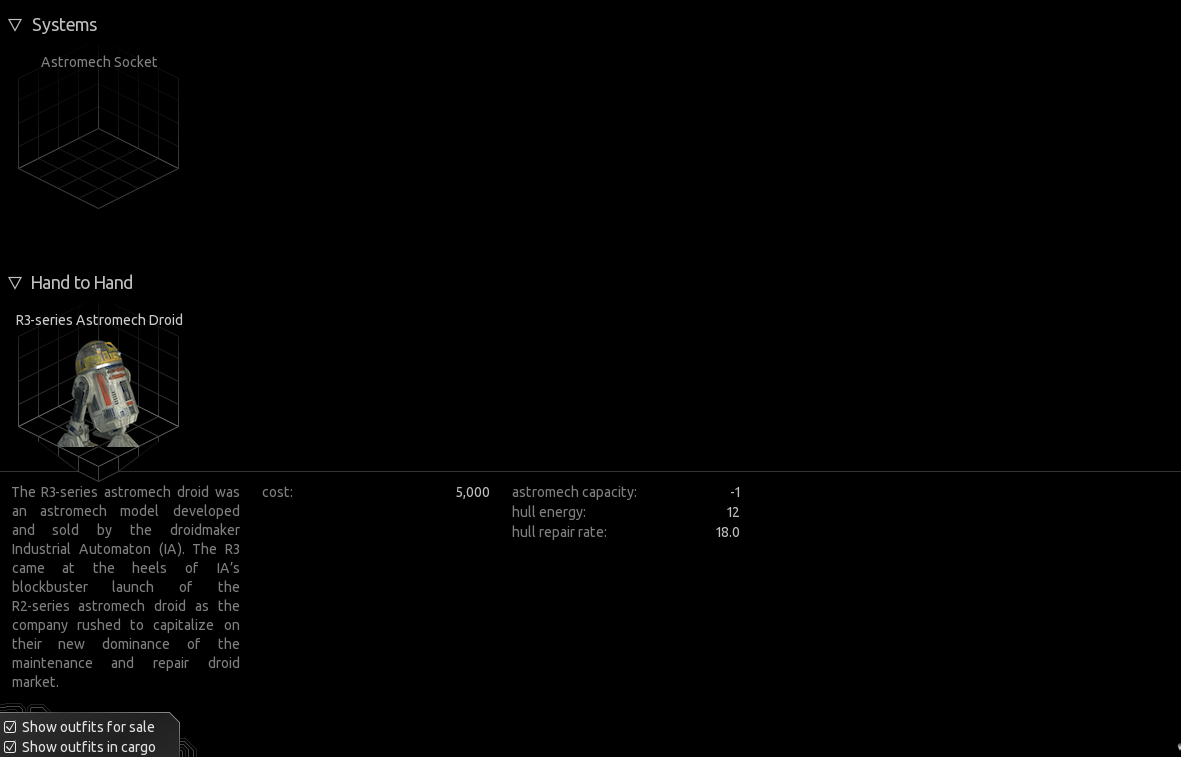 One final aspect of the plugin that I have worked on recently are some hails for the Galactic Empire, which again were pretty simple to code. The dialogue options are pretty limited at the moment, but since I know how they work now, it'll be easier from here on. 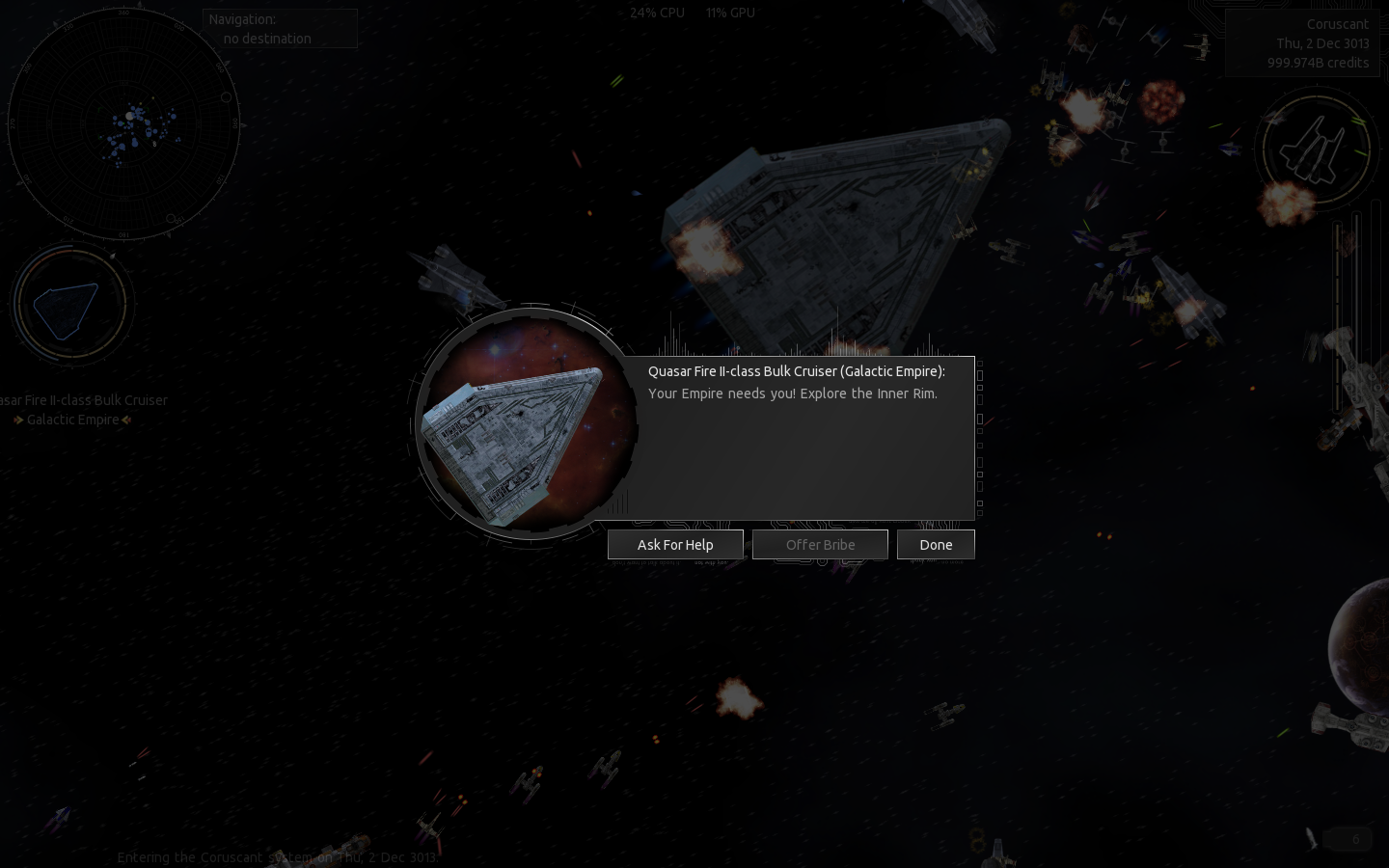 Something else that I have been meaning to look at for a while is ship balancing, something that has been completely neglected in previous versions.

Now although I can't pretend that the new balancing for v0.4-alpha will be flawless (in fact, it's most definitely far from that), ship costs, hull values and shield values are already much better.

The foremost issue that I was facing was in regards to maintaining consistency with SW lore, particularly for ship designs like the Fang Fighter or the Eta-2 Actis-class Interceptor (both of which do not have shields at all). This gave them an immense disadvantage during combat, as they were unable to recover health. Now, I've tried to accomodate for this by giving these particular ships a much greater hull, so that their combined health is essentially the same as other fighters. 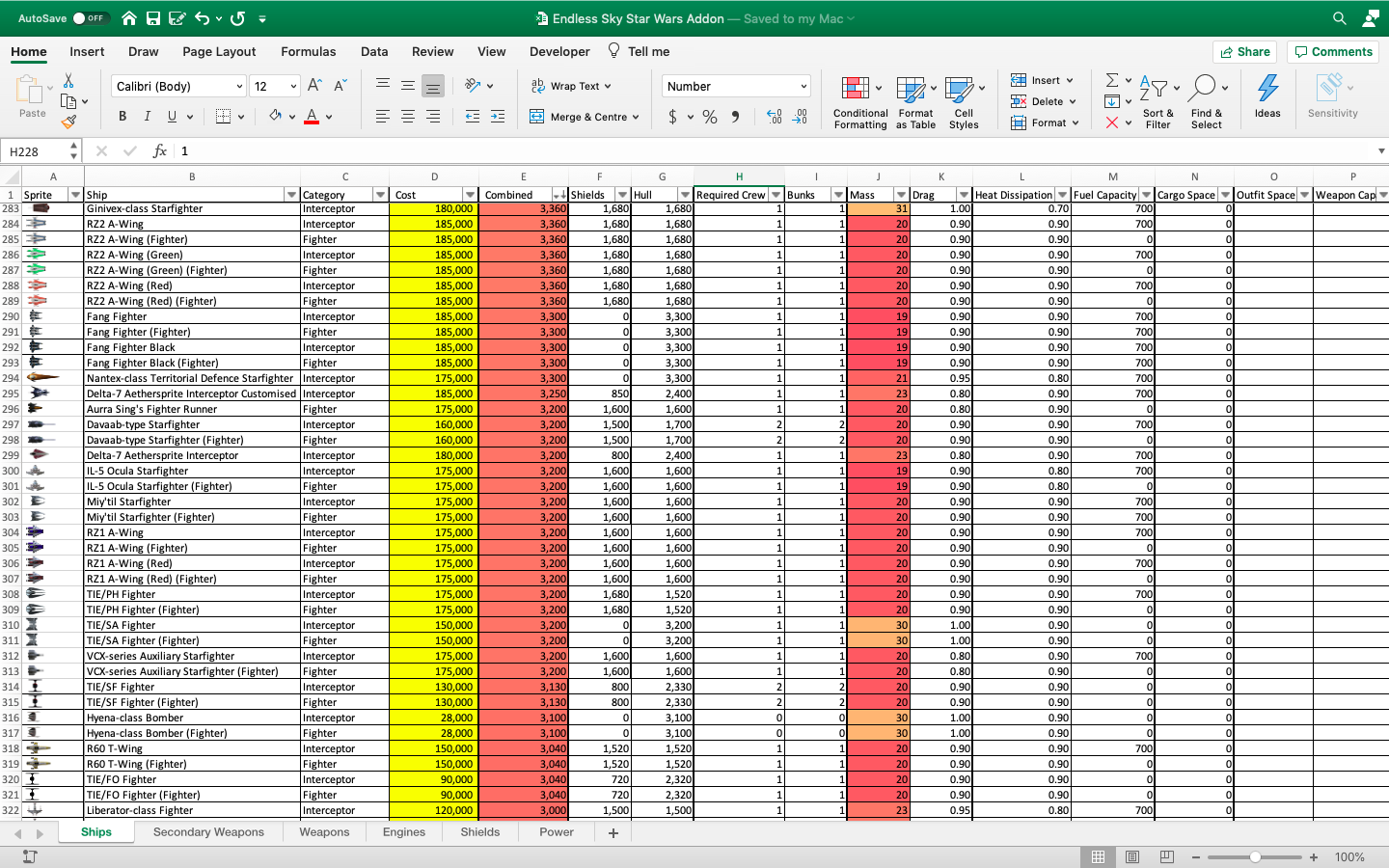 Anyway, that's all from me!

So I finally received permission from most of the artists to use their artworks, including the one who created over 200 ship designs. Phew! It looks like...

"Slow progress is better than no progress" – probably a quote from same famous author.

Adding ship thumbnails for all of the current ships (and adding a few more ships as well). This will make the shipyard screen far less laggy! *Sigh...

During my time testing the ships from my (still largely unfinished) plugin, I spent about 20min purchasing an absurd number of ships (over 1400) just...

This alpha has around 280 different ships and a few explorable systems (including Coruscant, Anaxes, and Empress Teta). A few experimental missions have...

Version 0.1.6: Some more missions have been added in this release.