The Battle for Middle-earth has just begun...

Return to the classic gameplay of the first Battle for Middle-earth, reimagined with countless new heroes, units and abilities. Journey deeper into Tolkien's world than ever before, relive the movies through meticulously crafted visuals and forge your path to victory in epic strategic battles.

Take command of eight unique factions and over 10 subfactions!

Master the One Ring with unique Ring Heroes for every faction.

Take the battle to new maps, including all maps from the first game and unique new missions.

Lead dozens of new heroes, including Thorin, Imrahil and the Necromancer, or create your own custom hero with new abilities.

Get the very latest news, discuss new ideas with the community and find solutions for problems and issues.

The Road to Edain 4.6: The Misty Mountains AI

Greetings, companions of the Edain!

We've spent a lot of time over the last few months trying to figure out how to get the Misty Mountains AI to operate at a satisfying level. Unlike other races, the AI quickly reaches its limits here because it cannot be taught the building system so easily: After all, apart from the orc realm of Moria, no build plots are used here, but a semi-free build system. So today we want to offer you a peek behind the curtain and talk a little bit about the problems we were confronted with and how we were able to solve them. 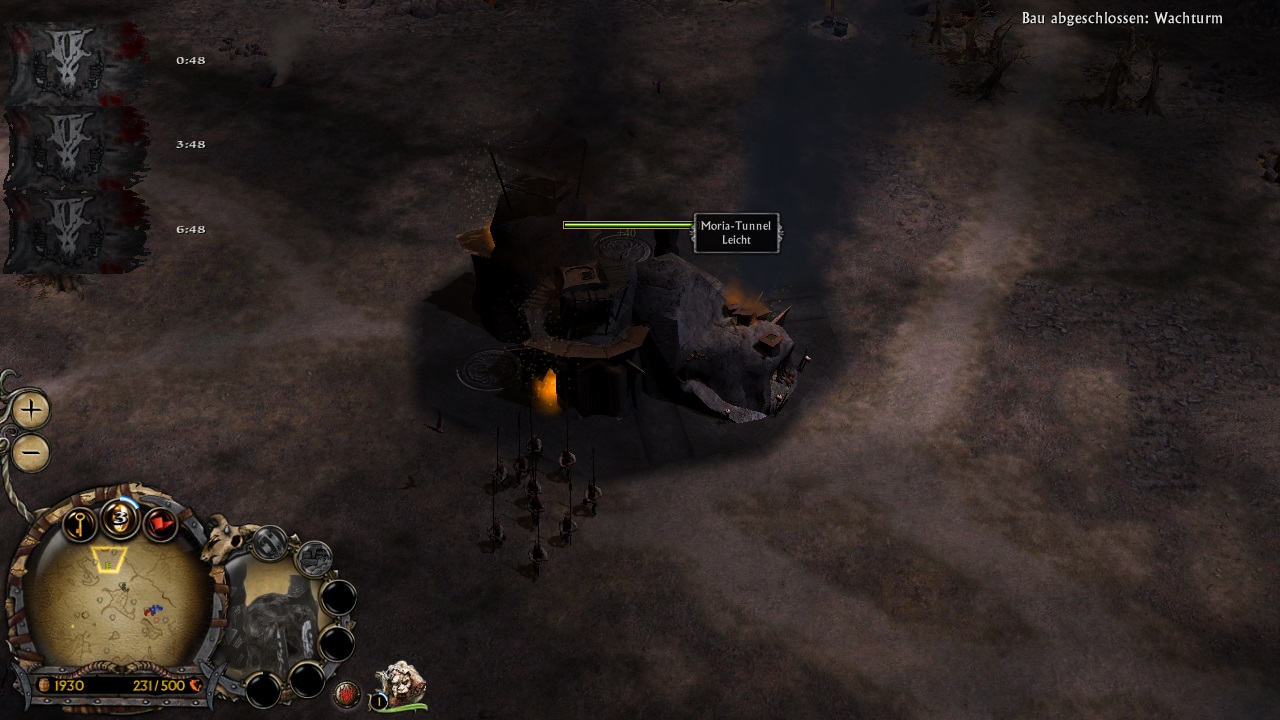 Why don't we just take the Gundabad buildings and put them somewhere else?

Our first problem was not of technical nature, but a matter of personell: our AI whisperer Reshef retired from active modding over the course of the last year. He had managed to create the basic framework of the race for the AI, which made our work much easier, but he was unfortunately no longer active when we were finalizing the new Gundabad and Goblin-Town expansions. The latter in particular, however, was extremely tricky and required a lot of work that can best be described as "trying around until it works". Getting us up to speed on how the AI worked required some time before the new build systems could even be tackled. Once that was done, however, we were able to activate the Spellbook for the AI fairly quickly, take care of recruiting all the different units and heroes, and then tackle the expansions. On our way there, minor setbacks could no longer stop us: 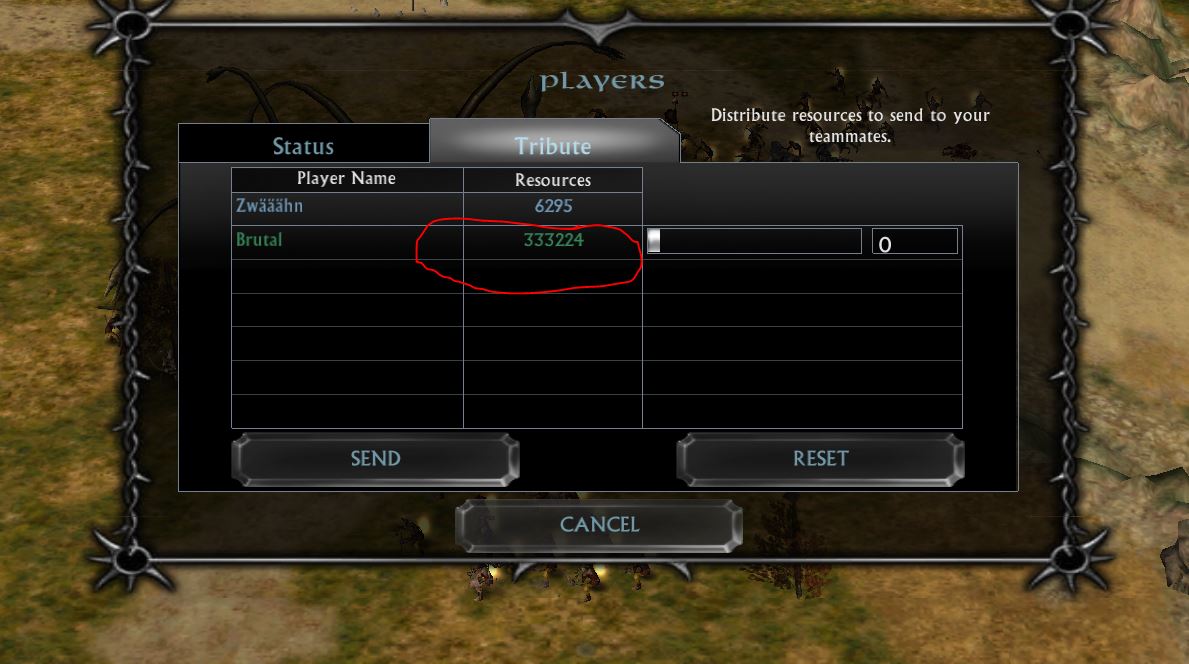 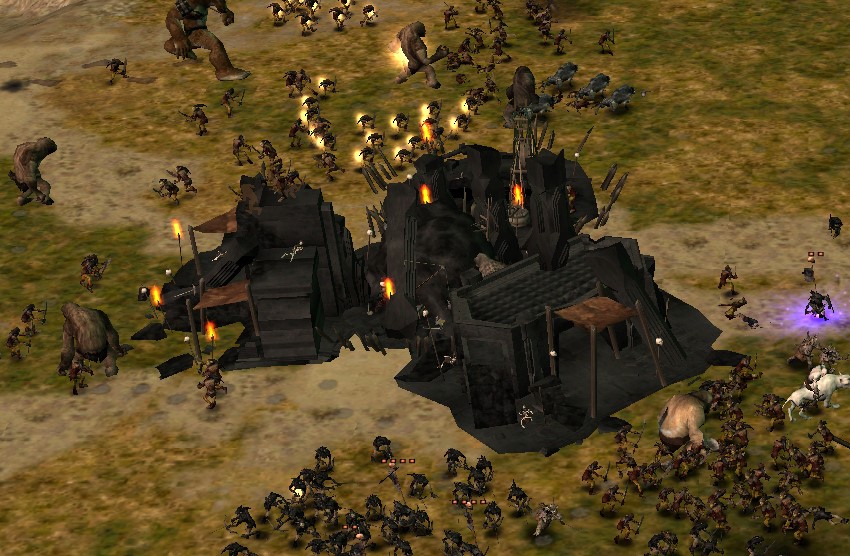 "How did you manage to build a Ransacked Mine within the citadel?" "Veeery carefully!"

The next problem was that the Orkstadt AI loved to build Goblin-Town tunnels... and nothing else. Neither did it try to build a Gundabad outpost, nor did it build more buildings from the completed Goblin-Town citadels. This led to extremely unsatisfactory, albeit somewhat hilarious, attempts, where the AI got addicted to building one and the same building as enthusiastically as if it were the finest pipeweed in the South Farthing.

The first step of our solution then involved giving the AI two different builders, each of whom could only dig tunnels to either Gundabad or to Goblin-Town. The AI alternates in recruiting them, ensuring that it actually has access to all three orc realms. After a few minor hiccups where Gundabad tunnels would just vanish into thin air and the builders would reappear out of said nothingness and immediately start digging tunnels to Goblin-Town again, the AI was able to handle Gundabad just fine. Radagast the Musical had also created new, suitable models for the build plots of the stone Gundabad citadel, raising their own Gundabad banner. 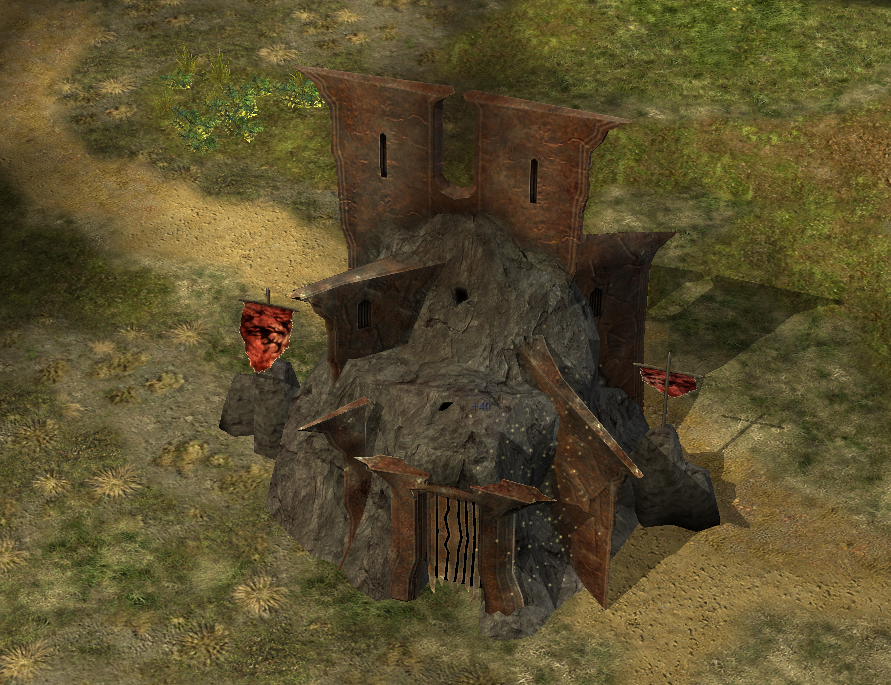 That left only Goblin-Town. Here we had to get creative, and FG15 was finally able to come up with a solution that included invisible nature mages. Yes, you read that right. 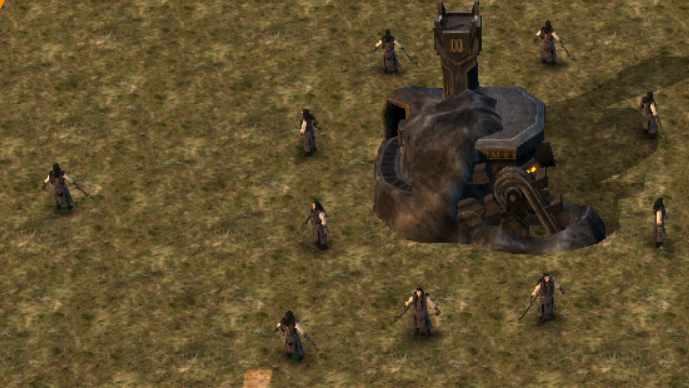 The initial idea for our solution

The problem was this: From a technical standpoint, the Goblin-Town expansion in 4.6 consists of a series of walls and wall hubs. This allowed us to incorporate the Orc City's winding but connected suspension bridges into the game and allow each player to construct their own individual expansion. However, the AI can't handle this - which is why we had to reach deep into our bag of tricks. The invisible nature mages we invented for the AI are spawned in a circle around the Goblin-Town tunnels and have only one task: they transform into the scaffolds, at the end of which slave holes, loot hoards and barracks are then created. Depending on how much space is available, this will ensure the creation of always unique new camps - theoretically, more than a million different AI Goblin-Towns are possible. This way we could ensure that the AI can do something with both Goblin-Town's scaffolding and the buildings at the end. The result is something we are quite proud of: 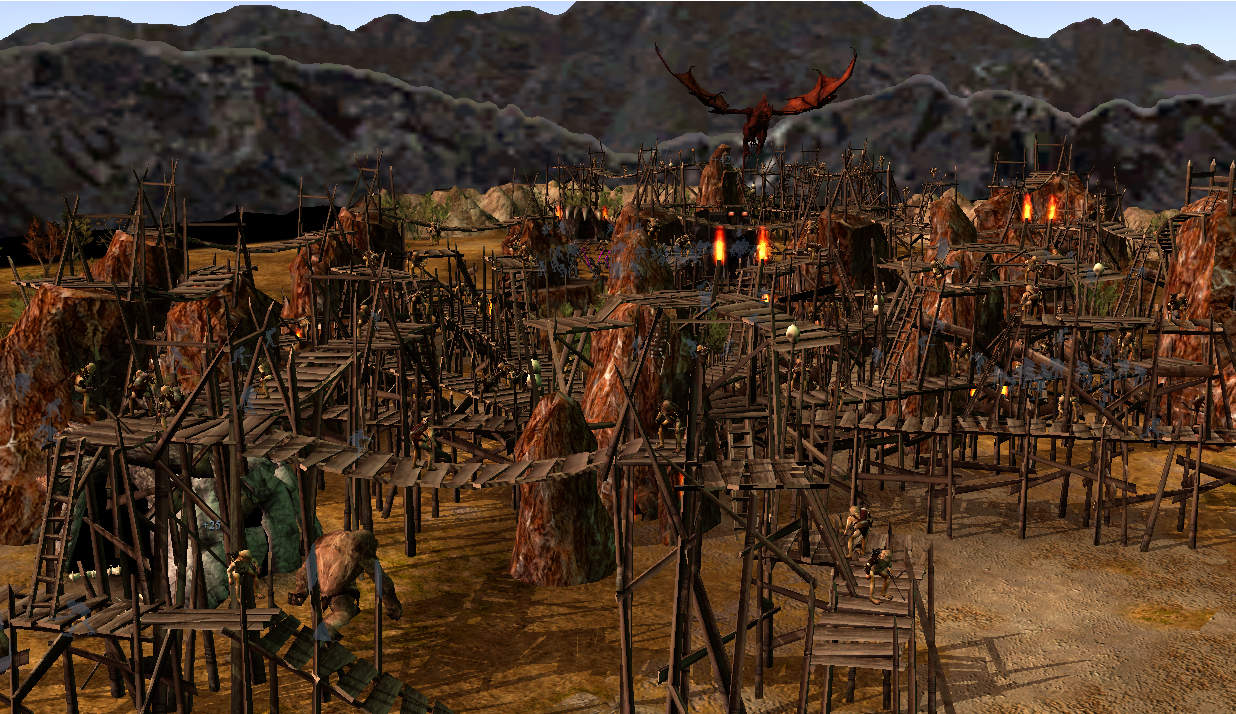 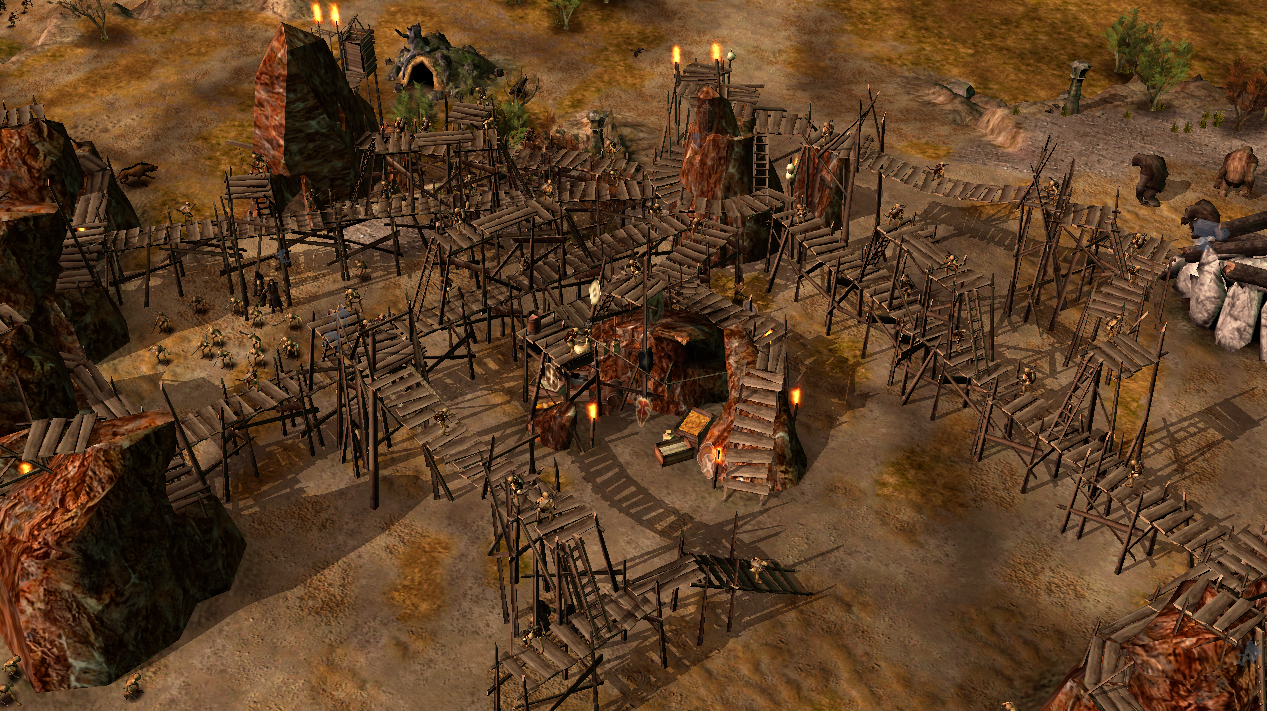 We hope you enjoyed this behind-the-scenes look at some of the lesser-known parts of the development process. As always, we welcome feedback and are happy to answer your questions!

The Road to Edain 4.6: Settlements and Outposts

Taking a look at the settlements and outposts of the upcoming Misty Mountains faction.

After showing you our rework of the Last Homely House in Middle-Earth - Rivendell - last week, we are continuing with a completely new fortress map for...

The Road to Edain 4.6: War of the Ring - Graphics Update Part III

Presenting Part III of our graphics update for the War-of-the-Ring-mode in the upcoming update.

This download contains all files you need to play the latest version (4.5) of the Edain Mod. If you experience any problems, please refer to the Readme...

This download contains all files you need to play the version 4.3 of the Edain Mod. If you experience any problems, please refer to the Readme for frequently...

THIS IS NOT THE MOD DOWNLOAD! YOU STILL NEED THE EDAIN DEMO ITSELF! THE LAUNCHER WON'T WORK WITHOUT THE DEMO! This is the download for the official Edain...

This is just beautiful!

For those who want the game translated into Spanish. I have created an installer (version 2.0). You can download it here: Mega.nz

You install it where the mod is installed and that's it!

Don't know where to ask. Any chance the profile stats will be updated in Edain 4.6? You know, those numbers don't add up, because they still show the factions from the vanilla game: Men, Elves and Goblin...

In both Skirmish and War of the Ring modes you have three buttons: Main Menu, Profile and Play. If you select Profile, then Profile Stats, you can see your overall stats and the details of each faction you used. Edain Mod 4.5 still shows the factions from the vanilla game (Men, Elves, Goblins, etc.), so the stats do not correspond to the real ones. Any chance Edain Mod 4.6 will fix this issue and show the stats for its proper playable factions, such as Gondor, Rohan, Imladris, Lothlórien, Misty Mountains and so on?

There is a release date or not yet? Don't get me wrong im not try to rush you guys, you made an amazing job and i hope you will stay with us forever im just excited that's all

No, there is no release date. You asked this a week ago and I already answered it then. It will be released when it's done, as always.

You could think im exxagerating the value of this mod,but i can only tell you : try with your hands. Edain mod is without any doubt the best RTS based on the LotR series,and,but this is just my opinion,the best RTS overall. While being much more true to tolkien than any other EA's work,it combines great complexity with good-balance in an excellent way. But what,above all things,makes this mod stand out are the models of the units,heroes and buildings,just take a look to the gallery on the site…