The game that was meant to be. As the 2001 trailer showed us. Released. Check download sections, ladies! 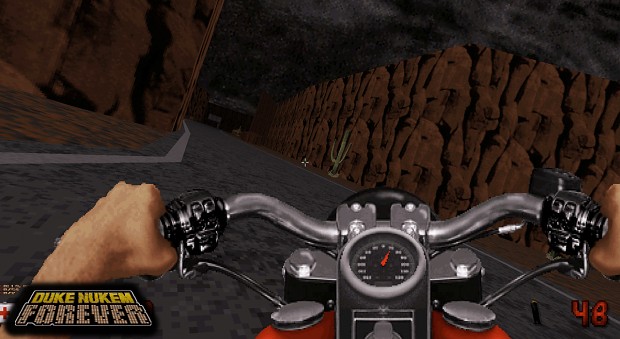 A new patch has been released:

This file fixes the motorbike´s speedometer. Simply unpack it in your DNF 2013 folder and enjoy, while we work on the big ass update that is gonna move Earth from its axis.

This update has been done a few years ago but I forgot to add it.

It removes those stray needles at the right side and replace them with a proper speedometer needle. Credits to Deeperthought.

Unpack the content of the rar file inside the same folder where your DNF 2013 is installed. You will be asked to replace an older file, which you have to accept.

Who said we were dead?

After four years of silence: The dream team comes again with some updates!

Fan made trailer by Maxwolf Goodlife

Maxwolf Goodlife has made three fan trailer for our mod, we have chosed this one because of its originality. Give it a look and well... Vote us! :)

Duke Nukem Forever is getting bigger.

Yeah we´re trying to make some hype, to stay on the lines of the game :D

Davox and Micky C have released a three-map episode for our mod!

Install in an empty folder. Put a duke3d.grp copy inside and run DNF.BAT. Software mode is recommended but Polymost is also supported. Do not replace...

This file fixes the motorbike´s speedometer. Simply unpack it in your DNF 2013 folder and enjoy!

This is a three level pack by Davox and Micky C, with new music and weapon.

Someone made an HD patch for some voices originally taken from the 2001 trailer of Duke Nukem Forever.

How do I change the FOV?

I really hope you will eventually bring that update that was teased back in 2017!

When will be the next update?

Any chance that they'll have as mod DLC for switch or PS4?

So many memories... so many SAD memories. How could they, how could HE! Yes, I know the rightful owners can do what they want with their product. But when the licensees completely SUCK at creating video games they should just hand it out to the passionate and talented fans instead.
This mod is great. eDuke32 is great. But I can't help miss the (Unreal engine) ports that were thrown a "cease and desist", through the years.
The 2001 trailer is a goddamn etched in eternal nightmare and the "look for a sequel soon" words at the end of DN3D still just makes me wanna choke Mr."coming when it's done".

This was amazing! The first level starts off a bit slow, and besides the new art and a few references played like an ordinary Duke 3D level (although the view from the top of the lady killer is stunning) and there's good atmosphere. After you get the bike, there's a bit of a turning point and gameplay starts becoming more ambitious and interesting, plus all the references, both in-your-face and the smaller ones, and the obvious/exact replicas as well as ideas/locations etc which are only loosely…