The DOF Mod Collection for Star Ruler 2 consists of several mods that can be used together or separately.

Also known as DOF Main, this mod contains all the game play changes and additions for the added content.

DOF is a multiverse-at-war style mod that throws factions and races from various popular sci-fi settings into one common playing field. Star Wars, Star Trek, Stargate and Battlestar Galactica all make appearances with 13 custom factions so far. Each has various tweaks, additions and mechanics (including AI support) to try and make them feel as they should. This in addition to the 7 unique stock races that come with the base game and expansion.

It can be used on it's own or in conjunction with the optional DOF shipsets. Given the large amount of content, this allows you to tailor your system/memory load based on your specific game session needs.

A collection of shaders and support textures for the Star Ruler 2 modding community and required for all DOF Shipsets.

All the in-game models and textures for Homeworld content. This shipset is not directly supported by content in DOF Main. Requires DOF Shipset Common Library.

Adjusts the skybox to be darker and less colorful to produce a darker, grittier and more traditional space-like lighting environment.

The following mods area already included in DOF Main, but are also available as stand-alone mods:

Modifies the way fleet strength is calculated in an attempt to be more reliable an indicator.

Adds a simple FXAA anti-aliasing option to the game.

I've been quietly working on updating meshes and textures for this shipset for the last while. I feel that there is enough new to warrant an updated release now. Take a look at the release notes for a full list of changes, but here's a little visual preview: 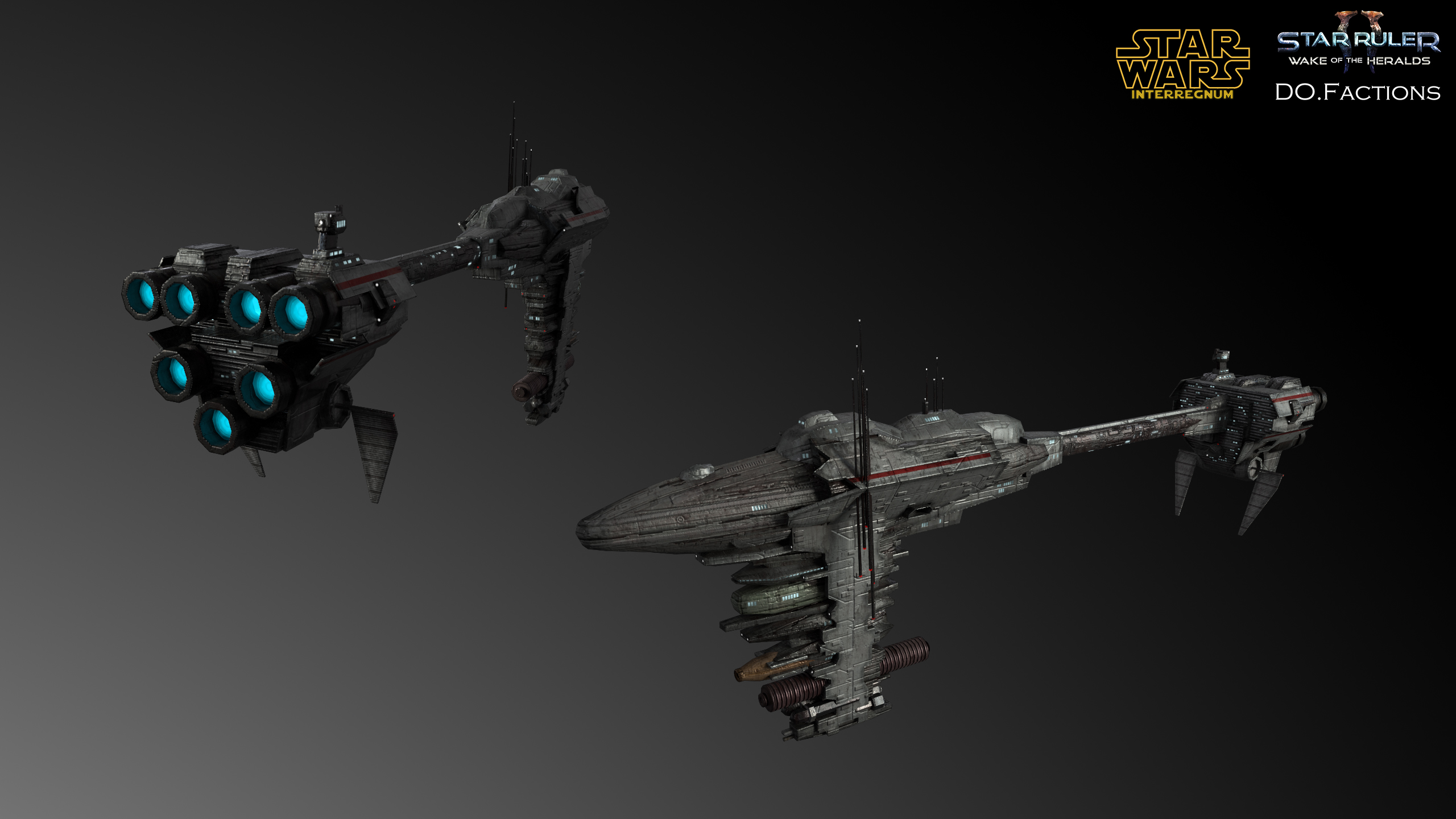 The Nebulon-B is hull is a support hull available to the Empire and the Rebel/Republic shipsets. It has received mesh revisions and an all new texture. 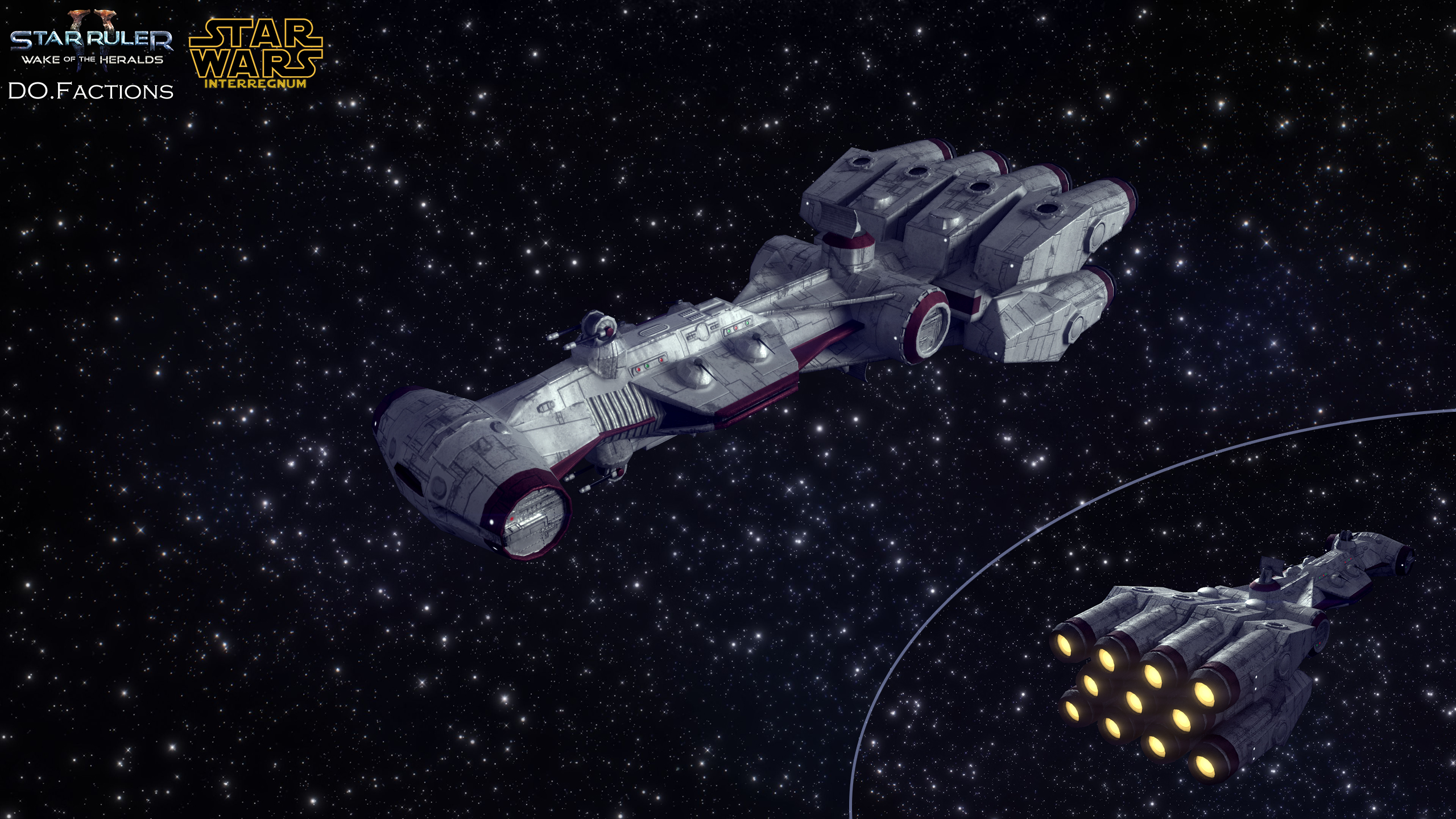 The iconic CR90 Corvette is available to the Empire & Rebel/Republic shipsets as a support hull. The mesh was cleaned up, revised and an all new texture was created for it. 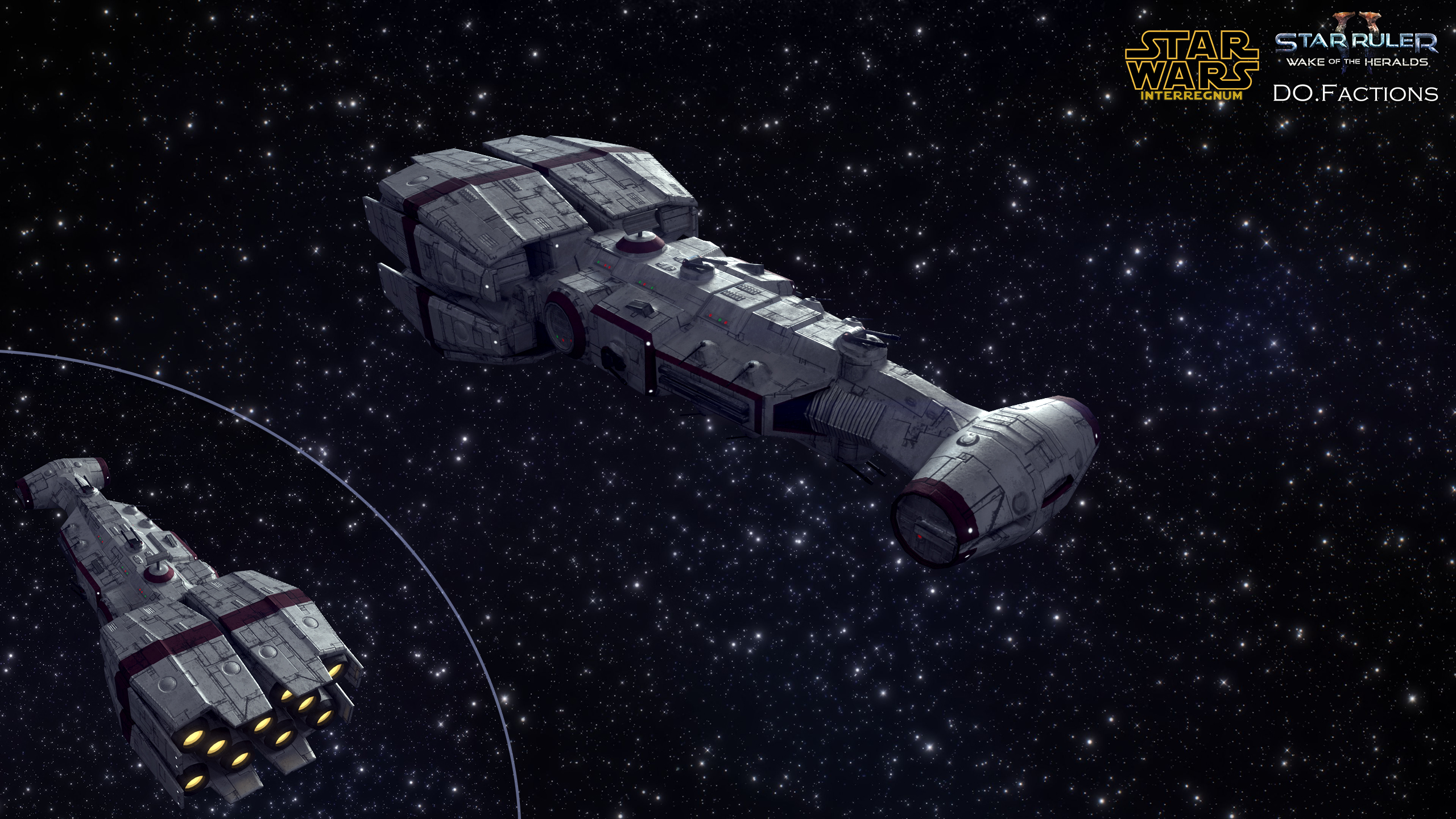 A variant of the CR90, I couldn't very well give it a new look and leave out its sister hull. The CR92a is available as a support hull to both the Empire & the Rebel/Republic shipsets. 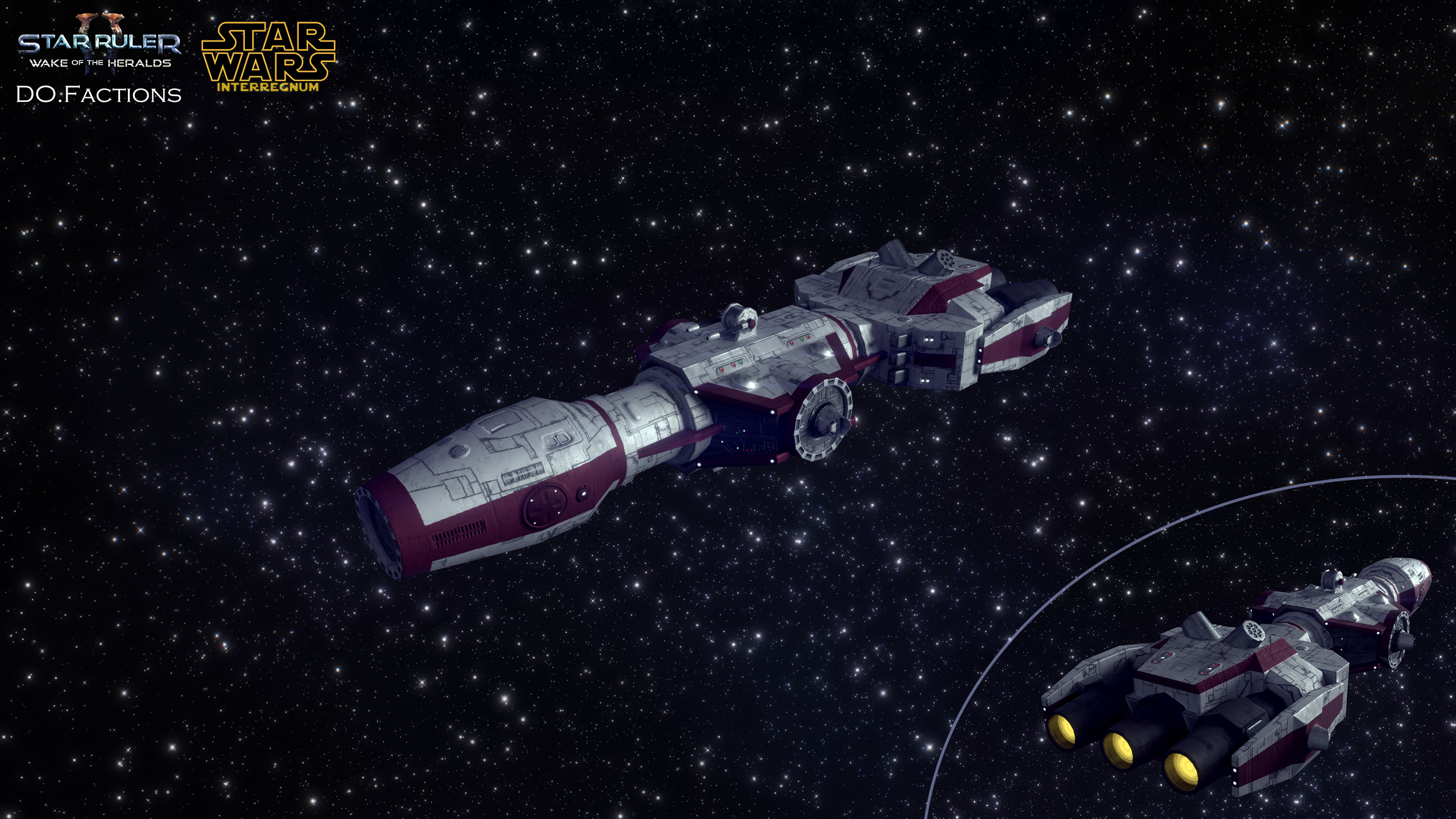 The third in the series of Corellian light frigates, the DP20 has seen a mesh clean-up and all new textures. It is available as a support hull to the Empire & Rebel/Republic shipsets. 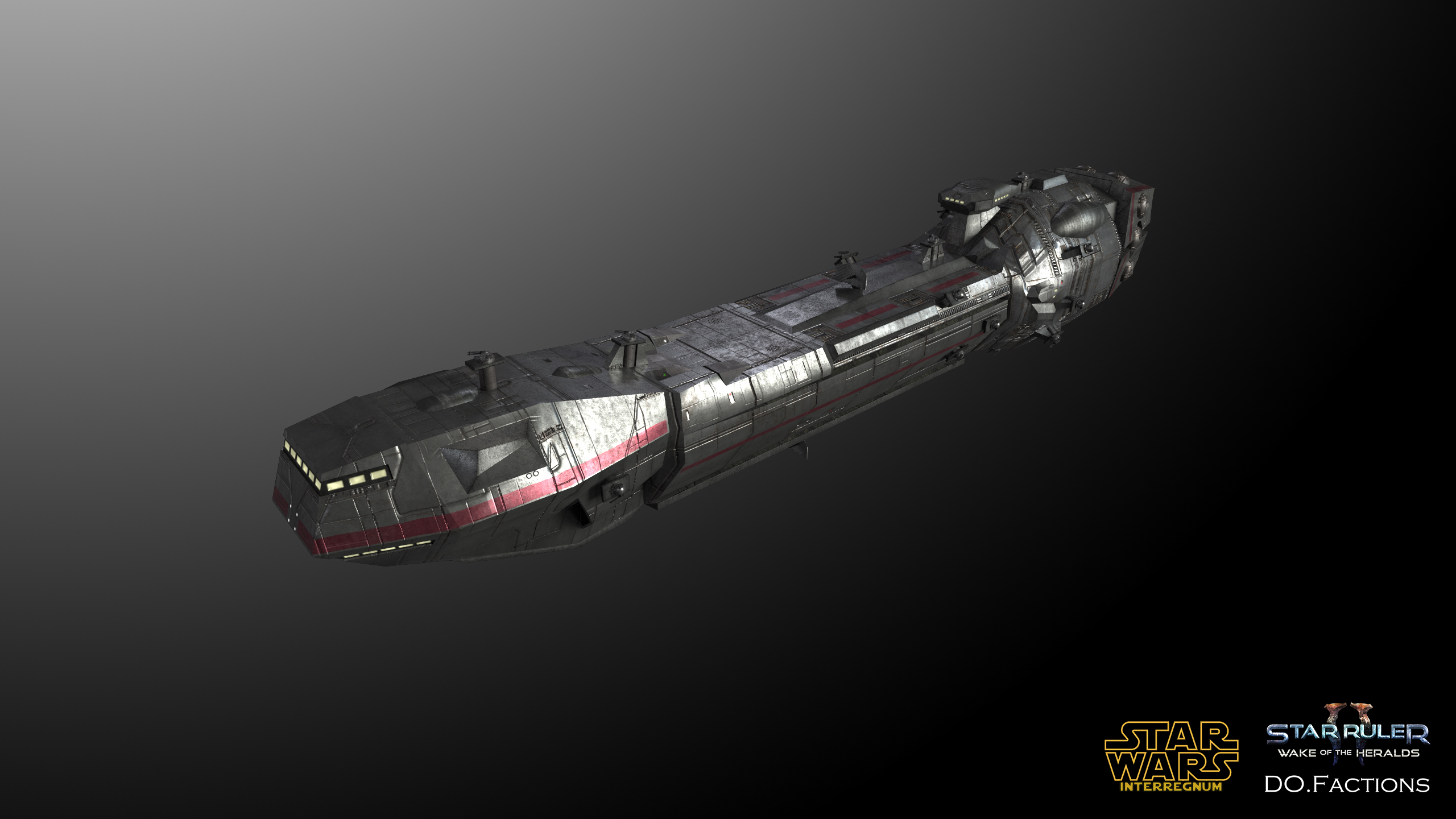 In a previous update the Carrack class frigate was updated. Now the Lancer frigate has received a mesh revision and new textures to go along with it. This is a support hull available to both the Empire & Rebel/Republic shipsets. 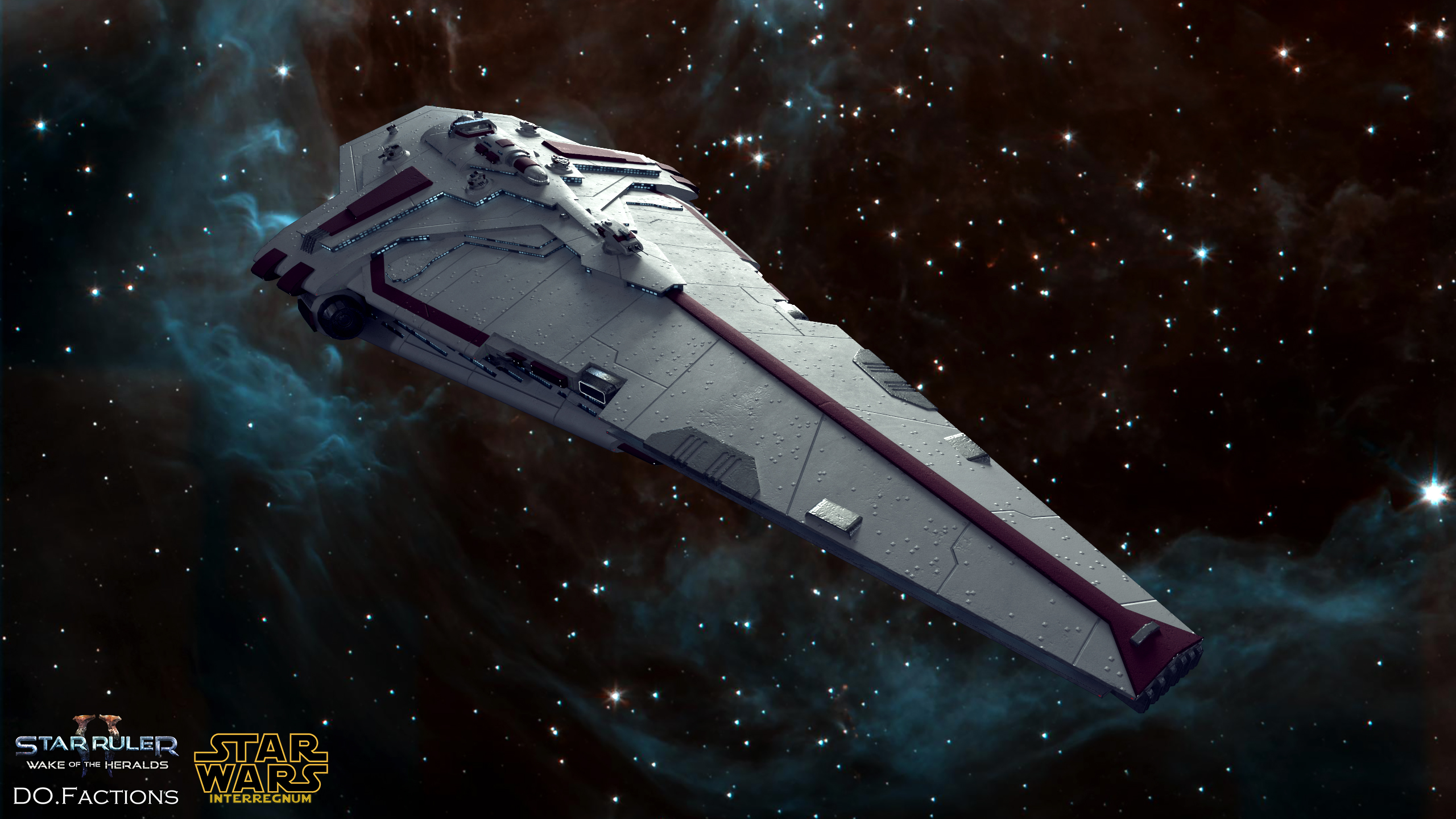 All new UVs and textures for this flagship hull for the Rebel/Republic shipset. 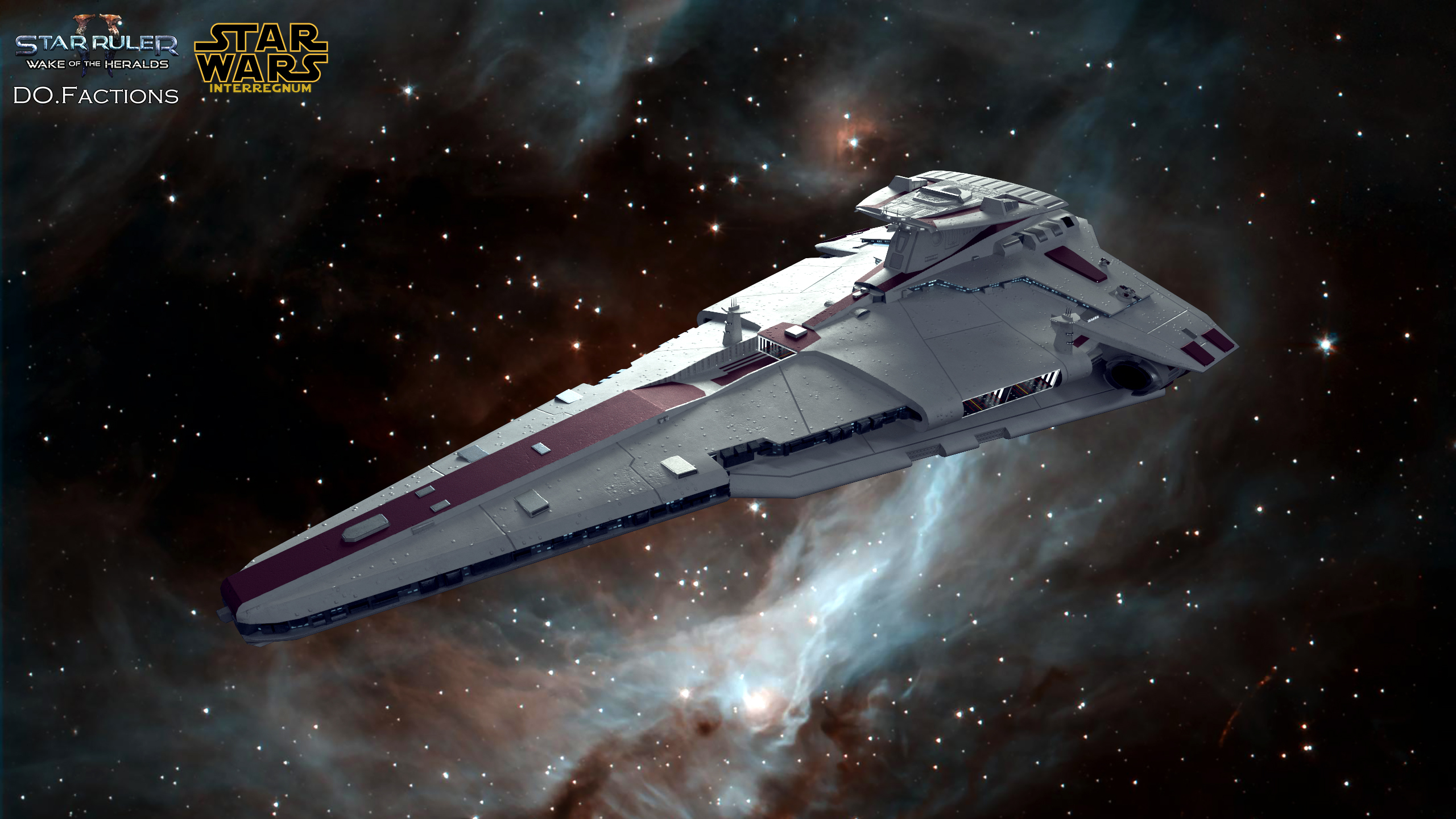 The sister hull to the Nebula Class, this is a brand new flagship hull addition to the Rebel/Republic shipset.

You may have noticed that all the renders contain logos for other mods. That is because I have been doing some work for both the Sins of a Galactic Empire and Star Wars: Interregnum mods for Sins of a Solar Empire: Rebellion. Hopefully you will see some or all of these mesh & texture updates, as well as some from the 1.006 version, make an appearance in future releases of both of them.

Whichever mod you play, be it Star Ruler 2 or Sins of a Solar Empire: Rebellion, I hope you enjoy the new ship assets.

A few words about the DOF Mod Collection coming to Moddb.

Hey; I really like this mod and I was hoping to expand on it for my own purposes (I would be willing to share my work but since I don't make my own models I wouldn't be able to share them without the artists approval). I downloaded blender and tried to export some models to obj but nothing seems to work; cannot find too many tutorials either. I was wondering if you could share what apps you are using and some general specifications the objs need to be in order to work with SRII. The mod wiki had a little info on the models but that either isnt working or not the issue.

Hi! I have a problem, every time I launch mods it crashes while loading game (when i already choose everyhing). I have SSD, 16 GB RAM, 8 GB 980M graphic card. Can you help please?

Try setting the texture detail to Medium and see if that works.

Hi, I want to say that this is very nice mod, but I have problem, every time I launch mod (Star Wars) it crashes after 1 minute in game. Can you help me?

Do you have the Shipset Common Library in place? If not, you need it if you're going to run any DOF shipset.

If you do, then you may want to try turning down the texture detail slider to medium and seeing if the problem stops. If it does, you can try moving up again until the problem starts again (then go back a step of course).

The texture detail was already set to medium, so that' not a problem. Does your mod requires specific version of the game? I was running it on 2.0.3.

The mod is for the current retail version of the game (which is 2.0.3). Out of curiosity, how much memory (RAM) does your PC have?

I have 6Gb DDR2 800Mhz, and I have 1Gb on my HD5770 graphic card. I have no problem running vanilla game, but this mod maybe requires more powerful pc. What do you think?

The shipsets can use up a lot of memory so I'm just wondering if we can rule that out. You could drop to low settings and try. Offhand, I'm not sure what the load for just base mod & Star Wars shipset would be though. Do you have the page file disabled in Windows?

I also vaguely recall that the shipsets can be a bit more difficult to run (had to drop settings) on AMD GPUs than NVidia. I'm not sure why or if applies to all models.

I also want to say that I am surprised how people are uninterested for this mod (or game).

I am huge Star Wars fan and I wish to thank you for making this great mod.

I will sure mention it on some discord channels to raise its popularity.

I think you solved my problem. I disabled page file in Windows, then tried to run game and crash occurred again.

What I did next is to set all graphic setting in game option to lowest, and so far no crash occurred.

What I will try next is to gradually increase graphic settings, and observe if crash occurs.

Thank you for your time mate:)

I did not mean that you should disable the page file. I wanted to make sure that you had not, or hadn't restricted it too small.

I am glad you got it working though, although sadly as such low settings. Hopefully you're able to increase it back up to a reasonable amount before your done.

And I'm glad that you enjoy the mod! Feel free to spread the word if you are so inclined.

Mass Effect: Beyond the Relays Stellaris

Sins of the Sirius Sector Sins of a Solar Empire: Rebellion

Sins of the Empires Sins of a Solar Empire: Rebellion